Skip to content
The Bad Mommy Cooks the USA
By Badmommy March 25, 2018April 18, 2019
FYI...my posts may contain affiliate links. This means that if you click on those links and make a purchase, I will receive a small commission at no cost to you. And those commissions are what makes it possible for me to blog. Thank you!

So today for lunch we had Arkansas Cornbread Sandwiches. Arkansas was one of those states we weren’t looking forward to.

Hubby picked this one out of the hat and handed it to me with a shrug. “They can’t all be winners,” he said.

I mean what were we going to have? Possum pie? We joked about that, but I discovered that possum pie is actually a thing—but thankfully it’s not made out of possum. I’m sure in the Ozarks right now, someone’s eating a pie made of possum, but there’s an actual dessert called “Possum Pie” and it doesn’t look too bad. I’m pretty sure I wouldn’t be able to sell that one to my family.

More internet searching was necessary. All the research that I did pointed to Arkansas’s cuisine being reflective of their economy and the resources around them; catfish, okra, barbecue, anything fried… To be quite honest, nothing was really shouting Try Me! We had already covered quite a few southern states, sampling some of the cuisine popular in Arkansas and the rest was, well, not as appetizing as I had hoped.

Believe it or Not, Someone Else is Doing a State Food Tour Blog

Fortunately, I stumbled across the blog of a woman who was on a similar “state tour of food”, Tracy Tastes America. Her blog included many state recipes, including one for Arkansas Cornbread Sandwiches—ham and Swiss sandwiched between slices of cheesy cornbread. I like ham, I like cornbread, I LOVE cheese…SOLD! We could make the sandwiches for lunch on Sunday and watch Nascar like real southerners 🏁(Hubby watches Nascar regularly…Nascar time is when I usually take a nap on Sundays. It’s a great tradition.) 😏

Not a fan of cornbread, ham, or cheese, Child #1 announced that the sandwiches sounded disgusting and he would not be partaking in eating them. Which was fine. Too bad for him—it’s his loss. He’s not experiencing the country’s finest food like we are. Hubby and Child #2 were skeptical, but willing to try…

The recipe consisted of simple ingredients, most of which we had on hand with the exception of the cornbread mix. I popped out to the store to retrieve a box of “Jiffy” cornbread and was delighted to discover that it only cost $0.59. What costs $0.59 anymore??? Seriously, you can’t even get a pack of gum for under $1. I bought two boxes just because it was such a bargain.

In the process of scouring the internet, I found a similar recipe on Pinterest—this one said that because the cornbread was apt to fall apart as sandwich bread, so I should NOT add the egg as the Jiffy recipe on the box calls for, but triple the milk content (1 cup). The 1/2 cup of cheddar cheese added to the cornbread mix should also help keep the bread together.

I was also excited at another opportunity to use my Cuisinart air fryer/toaster/oven combo (seriously Cuisinart, why aren’t you sponsoring me yet???). 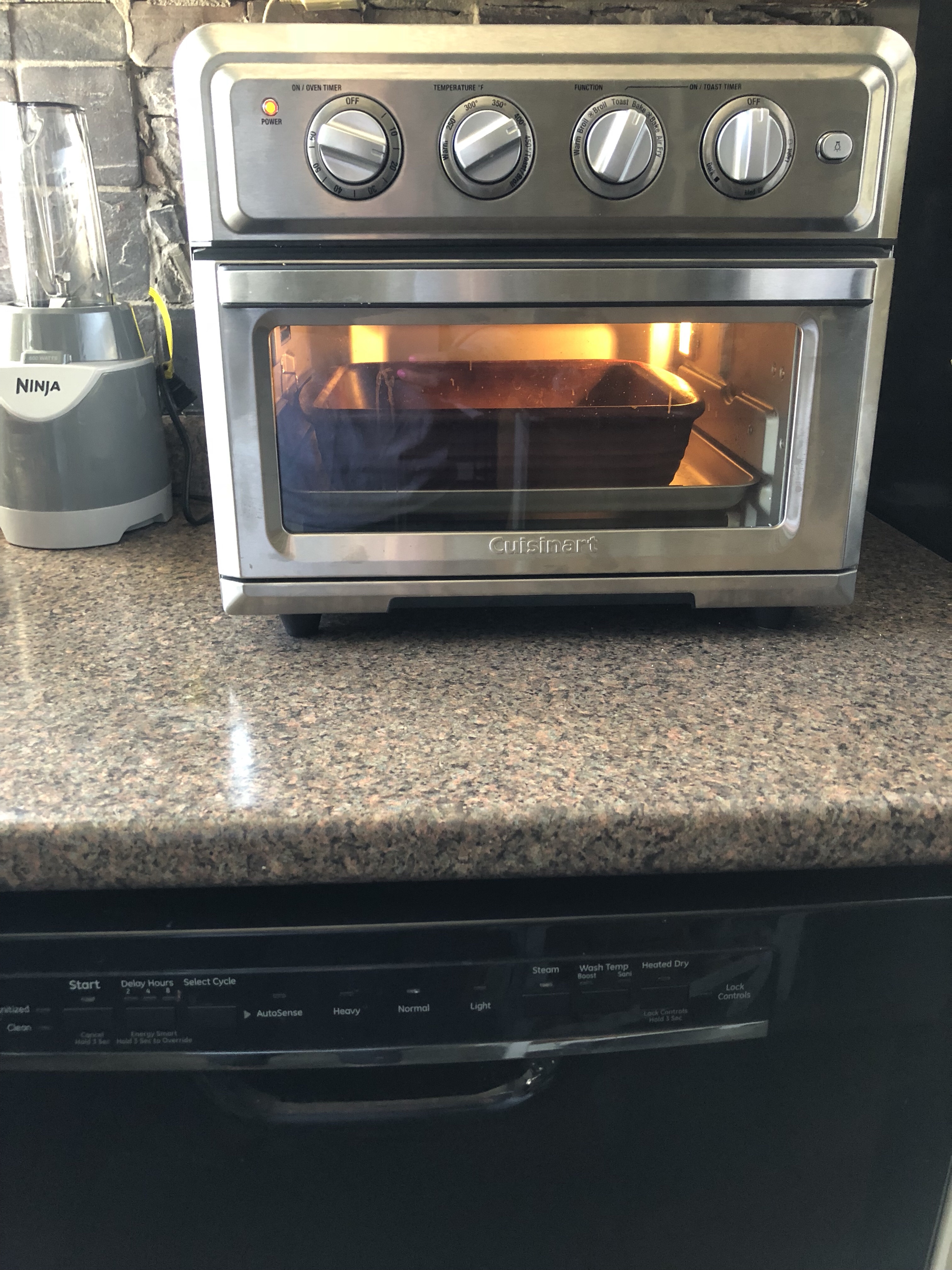 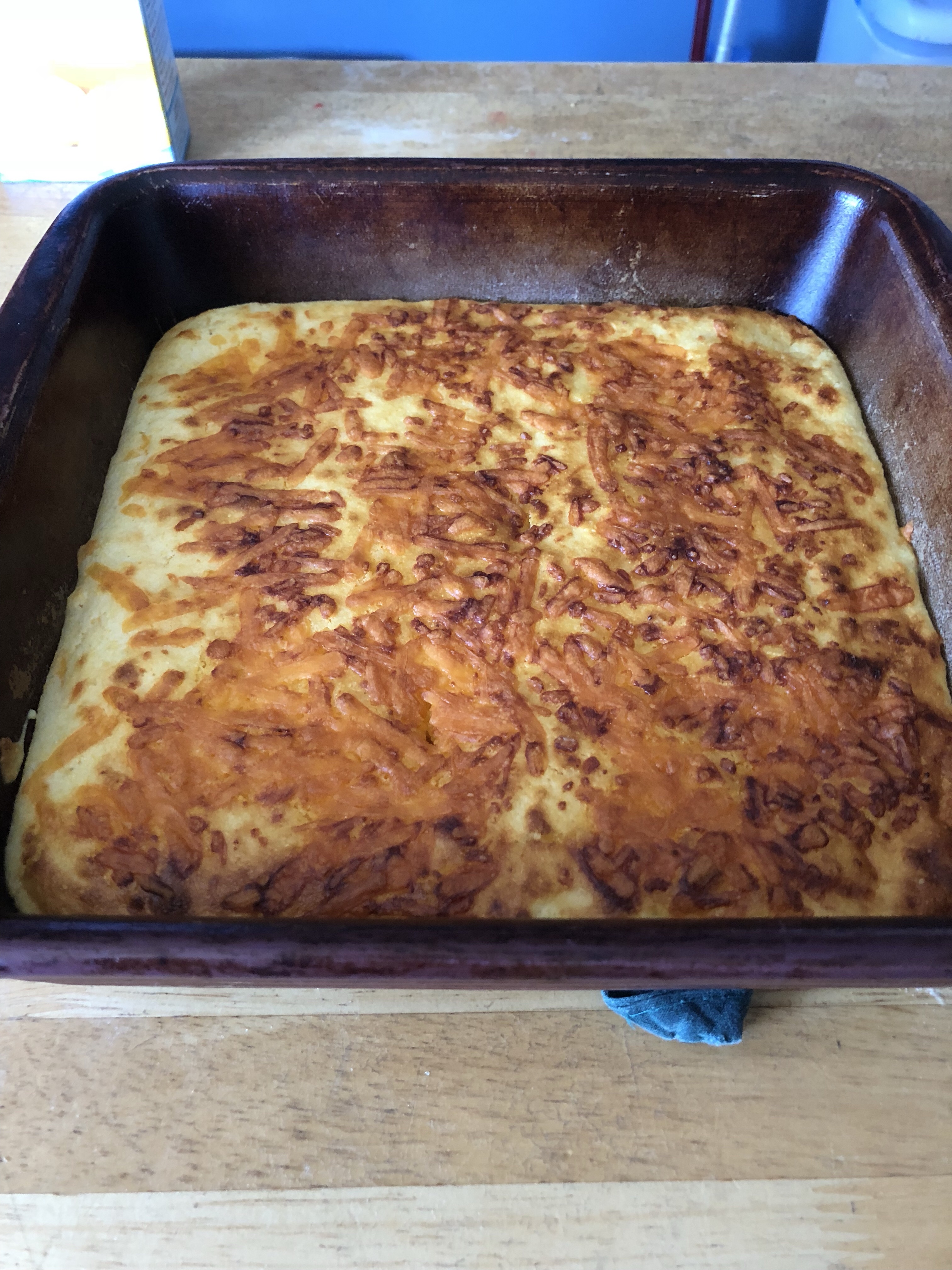 Since I’ve been reading a lot of recipes for the state tour, for some reason I thought there was bacon on these sandwiches. There was not. At any rate, I bought bacon for the sandwiches and what the hell…who doesn’t like a few slices of bacon on their sandwich? We added bacon. Plus, it gave hubby the opportunity to use his new toy, the cast iron skillet. 🙄 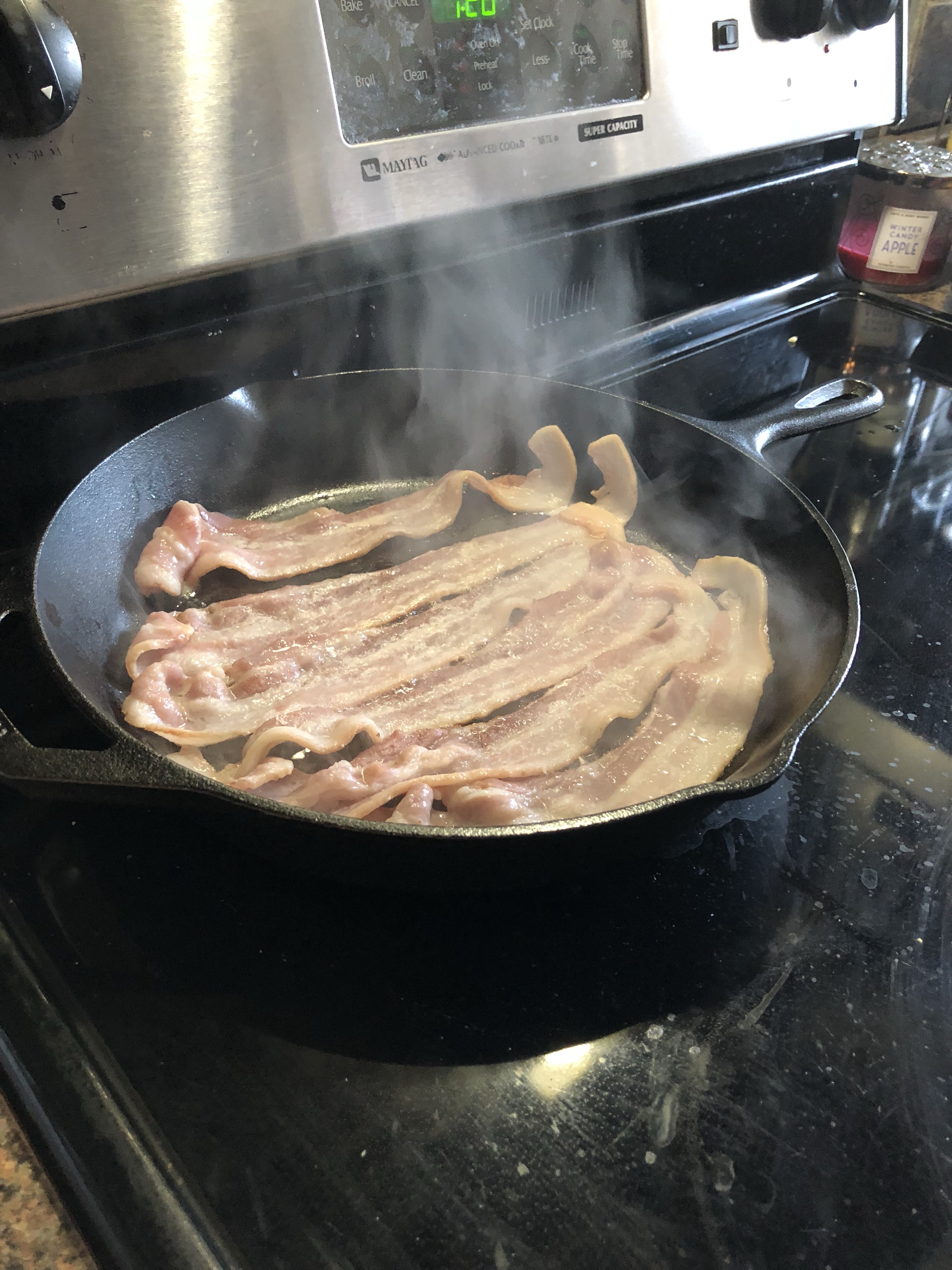 ***This is a good time to point out my posts may contain affiliate links. If you should click on the links and make a purchase, I will receive a small commission, at no cost to you.***

I’m not really allowed to touch this cast iron skillet. The other night, I was joking with him on the phone and I told him I used it to make cheesesteaks. I swear, I could hear his blood pressure go up. I got a ten minute lecture on cleaning the skillet properly so I didn’t ruin it. 🤦🏻‍♀️

If you’d like one for yourself (I would!), check them out here:

The sandwiches are simple to assemble:

Mayo spread on the bread, add lettuce, tomato, red onion, ham, and Swiss (and the bacon if you’d like). I cringed about the mayo—IMHO mayo and ham do not mix, but I added it anyway. I absolutely refused to add the red onion however…there are just some things I will not compromise on. 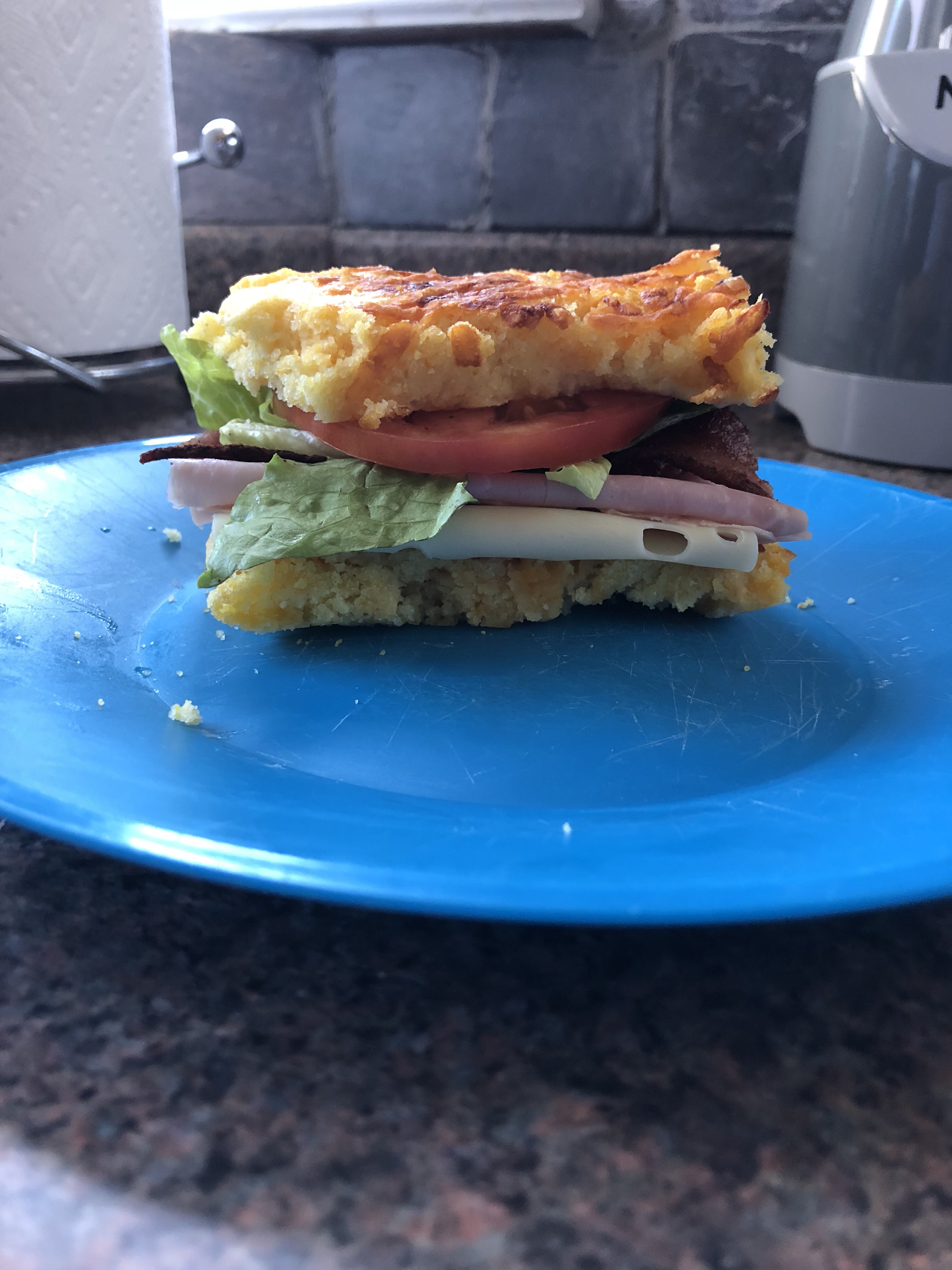 Surprisingly, it was a very tasty sandwich and very filling as well. We ate around 1:30 and none of us were hungry for dinner until much later than usual. Here is the dog, upset that we weren’t sharing our sandwiches with him: 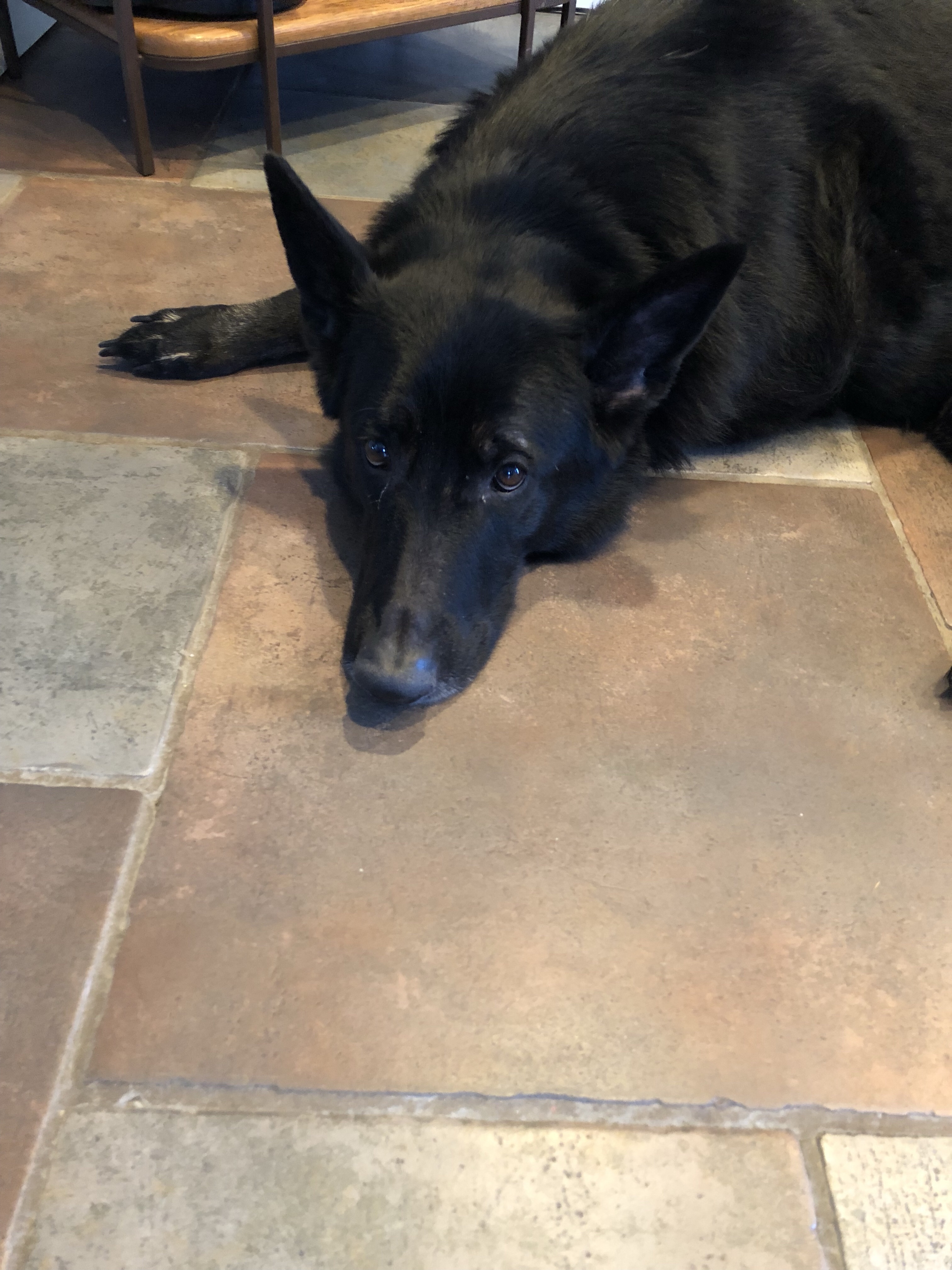 So go grab a box or two of Jiffy cornbread…the next time you’re having a lazy Sunday afternoon, you can whip up these sandwiches in no time for a yummy Arkansas lunch…no possum needed.