Skip to content
The Bad Mommy Cooks the USA
By Badmommy November 12, 2017April 18, 2019
FYI...my posts may contain affiliate links. This means that if you click on those links and make a purchase, I will receive a small commission at no cost to you. And those commissions are what makes it possible for me to blog. Thank you!

Paula Deen and I have nothing in common other than the fact that we were both born in the month of January. But today, I channeled my inner Paula Deen to put a little South in your mouth in honor of the great state of Georgia. I cooked an authentic Georgia meal including chicken fried chicken, candied sweet potatoes, biscuits, and sweet tea. For dessert we had peach cobbler—Georgia Cookin’ Bad Mommy Style!

I think that not only was I born in the wrong century, I was born in the wrong part of the country. I don’t think I’m a Yankee at all (maybe that’s why I dislike their baseball team so much?). Maybe in a past life I was Scarlett O’Hara with my hoop skirts and my fluttering lashes underneath my parasol. (My daughter’s name is Tara for heaven’s sake—it can’t be a coincidence.)

I love the heat and despise the winter. I can swoon at the sight of a handsome man. Pulled pork and BBQ sauce also makes me swoon. Sweet tea, corn bread and chatting with neighbors on my porch? Sign me up! I’m pretty sure I must be a Southern belle at heart. So of course, the idea of Country Fried Chicken had me drooling as I read the recipe.

By the end of this meal, I was sure Paula Deen and I might have diabetes in common as well. I was fixin’ to have this meal on the table by 5, but because there were so many components to it, I started prepping around 3:30. Thank goodness, too, because holy cow was this meal labor intensive and complicated! (And we didn’t end up eating till almost 6.) I was trying to make sure everything was done around the same time and man was that hard!

Translation: Georgia Cookin’ Bad Mommy Style was BUSY. The peach cobbler went into the crock pot right away since it would take the longest and then I started prepping for the candied sweet potatoes. Well, I was madder than a wet hen when I realized that the recipe that I’ve used in the past on Pinterest just up and disappeared!

I had to quickly piece together what I remembered with another candied yam recipe. The panic started to set in then. I was prepping the yams and making the tea, while making the buttermilk “marinade” for the chicken. At one point in time, I had all four burners on my stove going and my hands flying in all different directions. (Yeah, that’s a pot with tea in it. I actually boiled the tea in a giant pot on the stove): 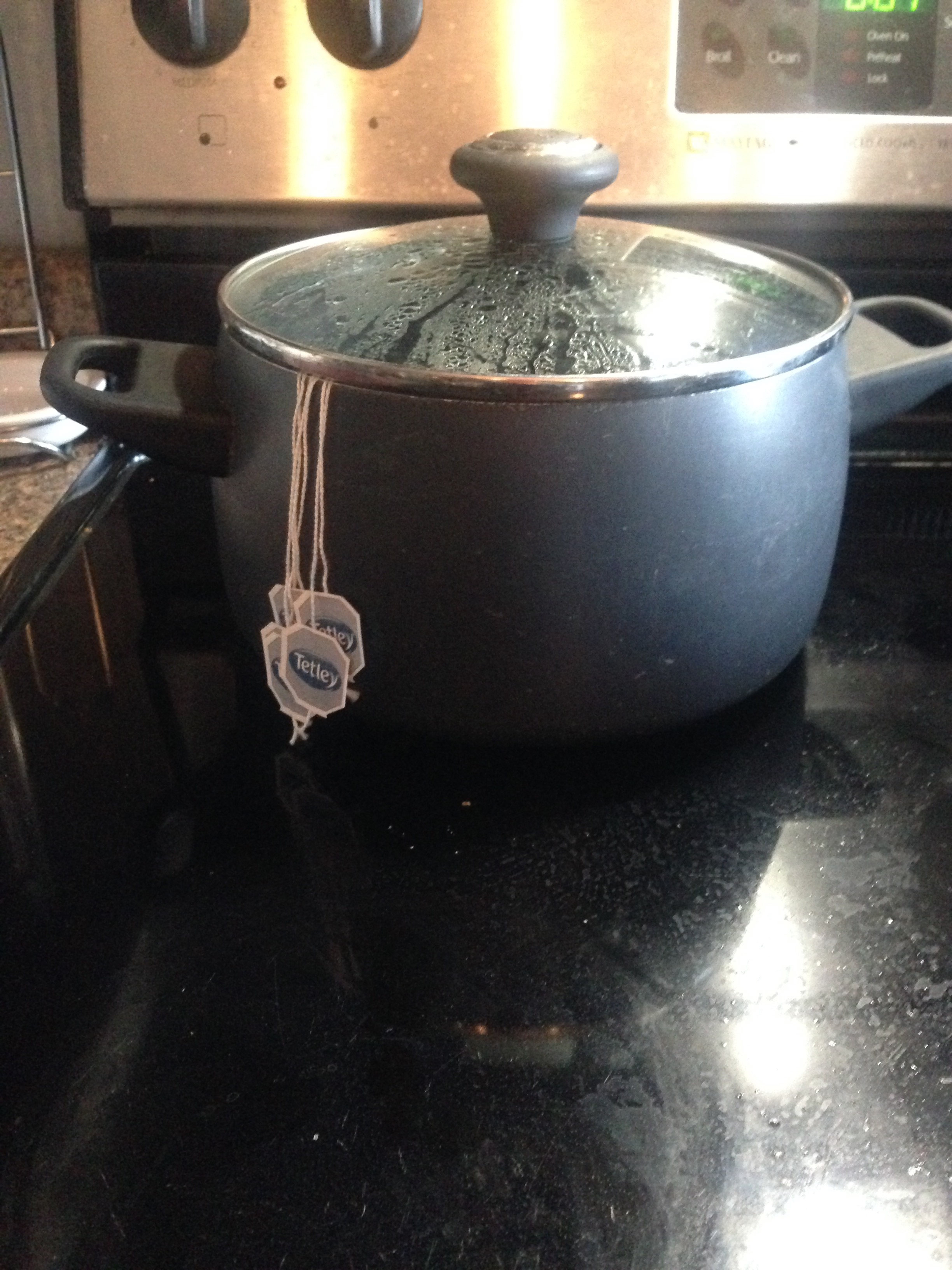 There were pots and pans and measuring spoons and cups and bowls and cutting boards…oh my!

The hardest part of the whole meal were the biscuits. Holy cow, did y’all know how many steps are involved in making biscuits? You have to grate frozen butter and use a pastry knife and kneed the dough and watch them bake and all sorts of crazy nonsense. At one point, I actually cried out “my biscuits are burnin’!” I remember making biscuits in home ec in middle school and they definitely weren’t this difficult.

Then again, those biscuits tasted and looked like hockey pucks, while today’s biscuits were little fluffy pillows of buttery heaven. I’d show you a picture, but all the biscuits are gone. My one kid doesn’t even like biscuits and he ate them.

So the biscuits were baking as I was getting the temperature right to fry the chicken. And it was taking forever. But I wasn’t going to make the same mistake I did last week and take a chance on “crowding” the chicken in the pan while it was frying. Nope, I was getting this chicken to crisp up if it was the last thing I did.

Each piece of chicken was going to get its own time to be the star of my skillet. So that took a while—as soon as it was done, I pulled the yams and the biscuits out of the oven where they were keeping warm and quickly whipped up the gravy. I poured the sweet tea and the meal was ready to go. 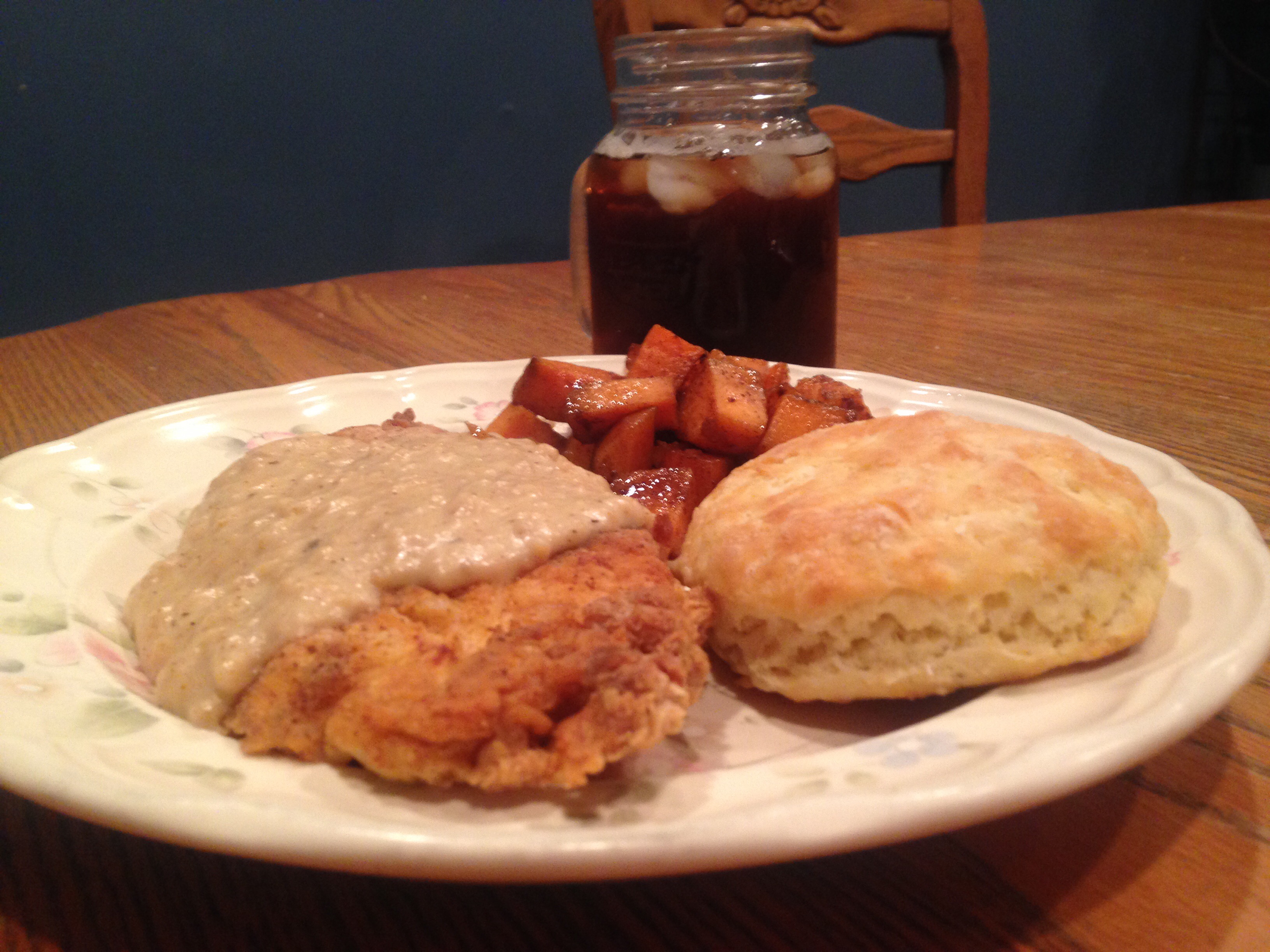 This Was Some Awesome Georgia Cookin’

Oh my heavens that looks delish! AND it tasted just as good as it looked—fried up nice with a spicy kick to it. Well I declare…I’m not such a bad cook today, am I? No! It’s not photo-shopped! I’m insulted by that insinuation. Today I was a Southern goddess in the kitchen.

Georgia Cookin’ Bad Mommy Style is pretty kick ass. Paula Deen, eat your heart out. Well, not really…her kitchen probably doesn’t look like a tornado came through after she cooks. I reckon I used every dish we own for this meal: 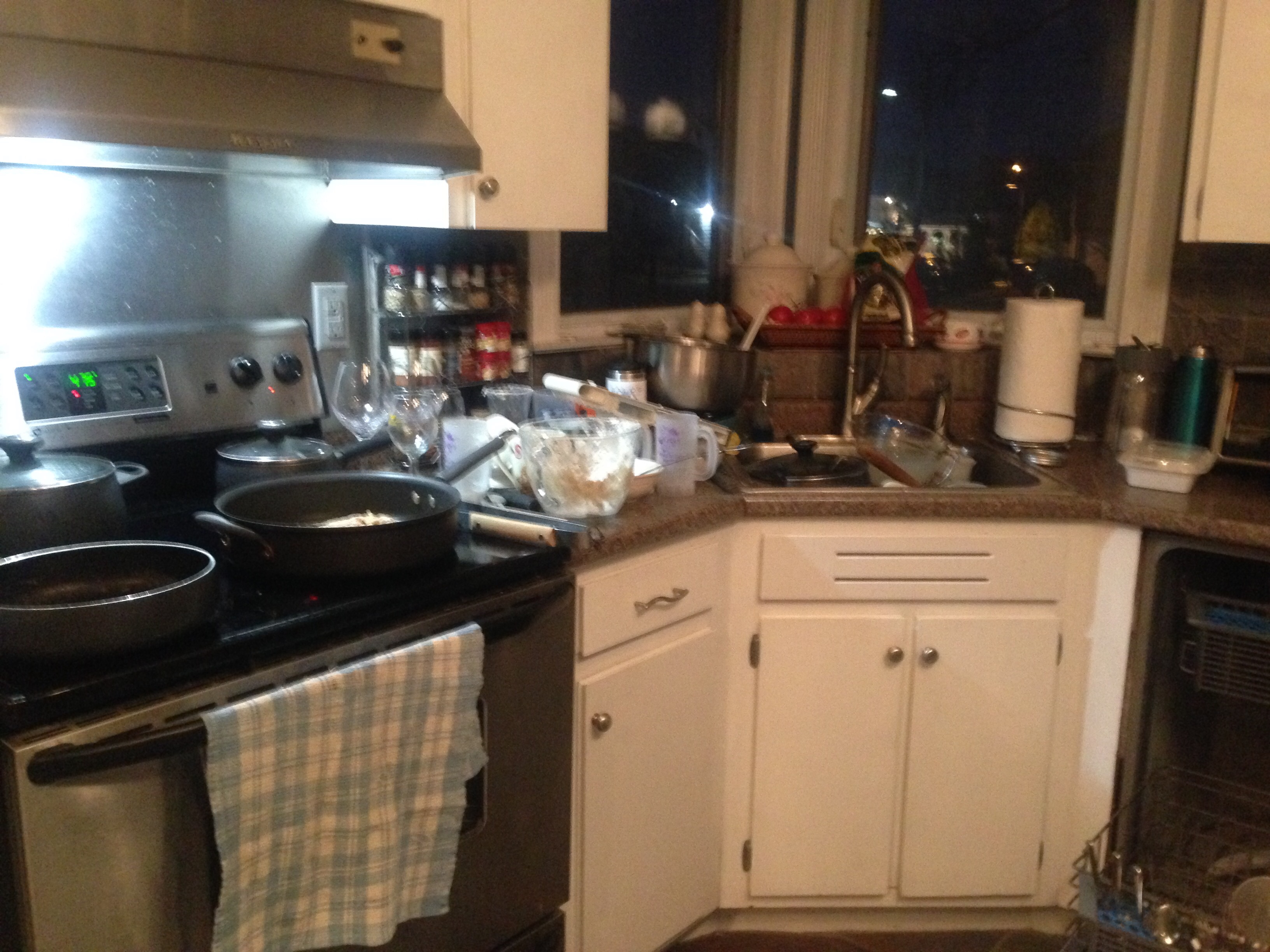 (Not the wine glasses…they were um, for a different recipe…) After eating that good Georgia cookin’, I was as full as a tick and had to wait a whole hour before I could even think about having the peach cobbler with ice cream. I have to say the cobbler was a little disappointing—a bit soggy even though the original poster of the recipe on Pinterest swore it would crisp up in the crock pot.

Hmmph. I added some peach vodka to my sweet tea to make up for it: (Well Georgia’s KNOWN for peaches!) 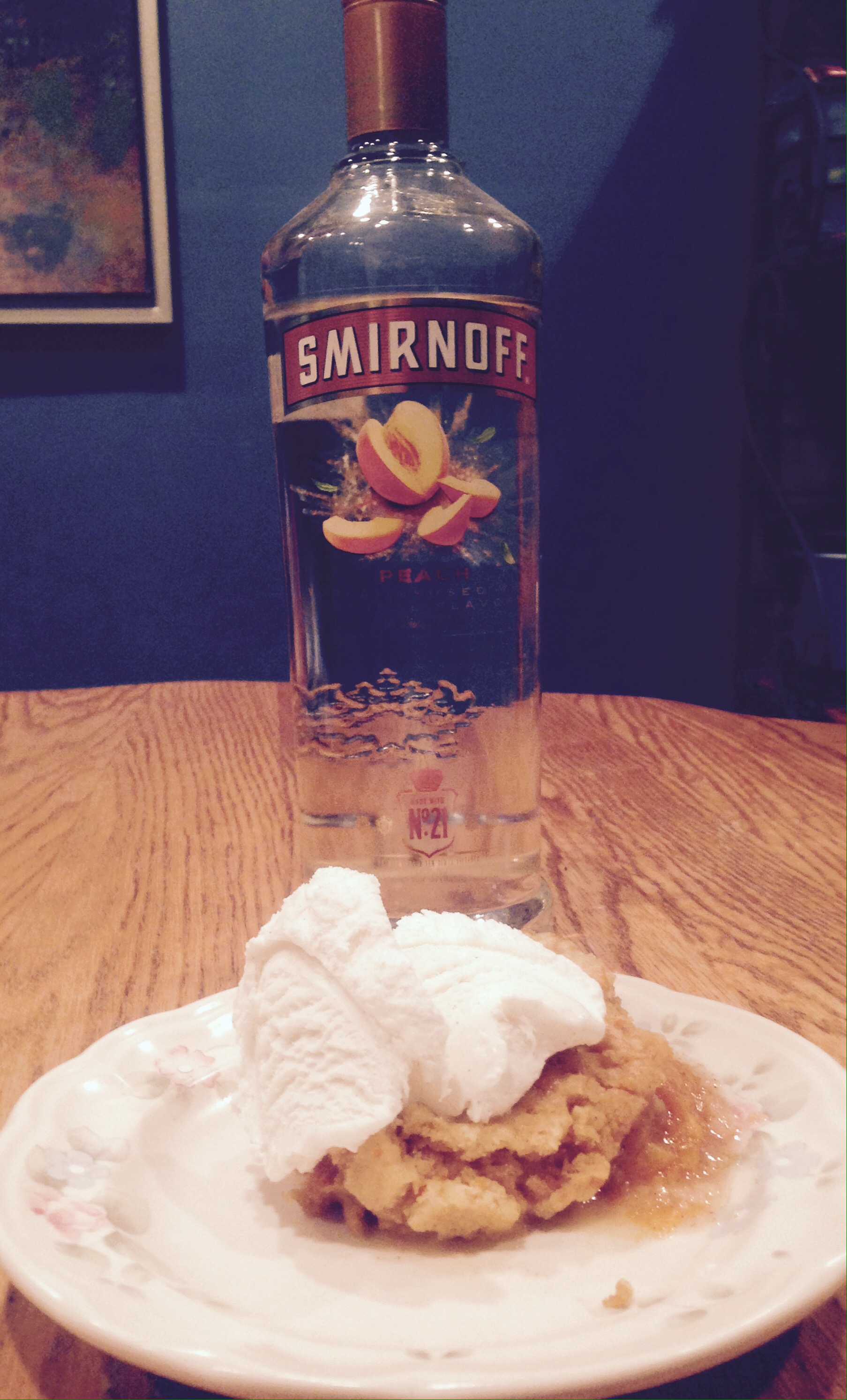 I’m planning to include all the recipes, ‘cuz I know y’all wanna make this awesome meal—Georgia Cookin’ Bad Mommy Style—but you’re gonna have to hold your horses. I used a lot of recipes and even stitched a few together to create my own, and I’m worn slap out right now.

Check back later in the week and I’ll have the recipes up if you’re interested in making this kick ass Southern meal. And I promise, just ‘cuz this meal was good, I won’t get too big for my britches. In fact, I’m sure I’ll screw up next week’s meal. Tune in to find out!

Update: Here’s the link to the recipes.