Skip to content
The Bad Mommy Cooks the USA
By Badmommy October 29, 2017April 18, 2019
FYI...my posts may contain affiliate links. This means that if you click on those links and make a purchase, I will receive a small commission at no cost to you. And those commissions are what makes it possible for me to blog. Thank you!

Back to the USA tour, we (we, meaning the hubby) pulled Indiana out of the hat. That’s the last time I’m letting him pick, by the way…I was really hoping for California since avocados are almost out of season and I need to have avocados for our Cali dish.

Anyhoo, Indiana…middle of the country…aka. Lack of Spiceville. I’m sorry if you’re from the middle of the country and you are taking offense to this—and I’m even more sorry that you guys don’t know what you’re missing. I goggled Indiana cuisine (Indianian??? Try saying that mouthful).

Sugar cream pie came up. Yes, it is exactly what it sounds like—a pie of sugar. Oh and butter and cream, too. Now I like pie as much as the next guy, but one with fruit in it…you know, so I can pretend I’m eating healthy. But a pie of butter and sugar? THIS is what the great state of Indiana is known for? Hello, diabetes and heart disease anyone?

As much as my sweet-toothed daughter REALLY wanted to have the sugar cream pie (her dream meal probably involves pixie stix emptied out over white bread—The Breakfast Club, anyone?), the rest of us in the house (you know, the ones with working tastebuds), would not hear of it.

So back to the drawing board. I then discovered that people in Indiana, Iowa, Illinois and company, enjoy a state fair delicacy called a pork tenderloin sandwich.

Now, as you know, I am a sucker for all things of the pulled pork variety. I, however, am not a fan of other pork products like pork chops, pork tenderloin or even…bacon (gasp). I WILL eat it, but I definitely don’t crave it. I was not looking forward to pork tenderloin sandwiches. But at least I wasn’t going to have to stomach a sugar cream pie.

This recipe was quite involved, we soon discovered. It called for the pork tenderloin to be pounded flat with a meat mallet and soaked in a buttermilk mixture overnight. The next day, the pork cutlets are dredged in flour and crushed saltines or Ritz crackers—has no one in the middle of the country heard of breadcrumbs???? 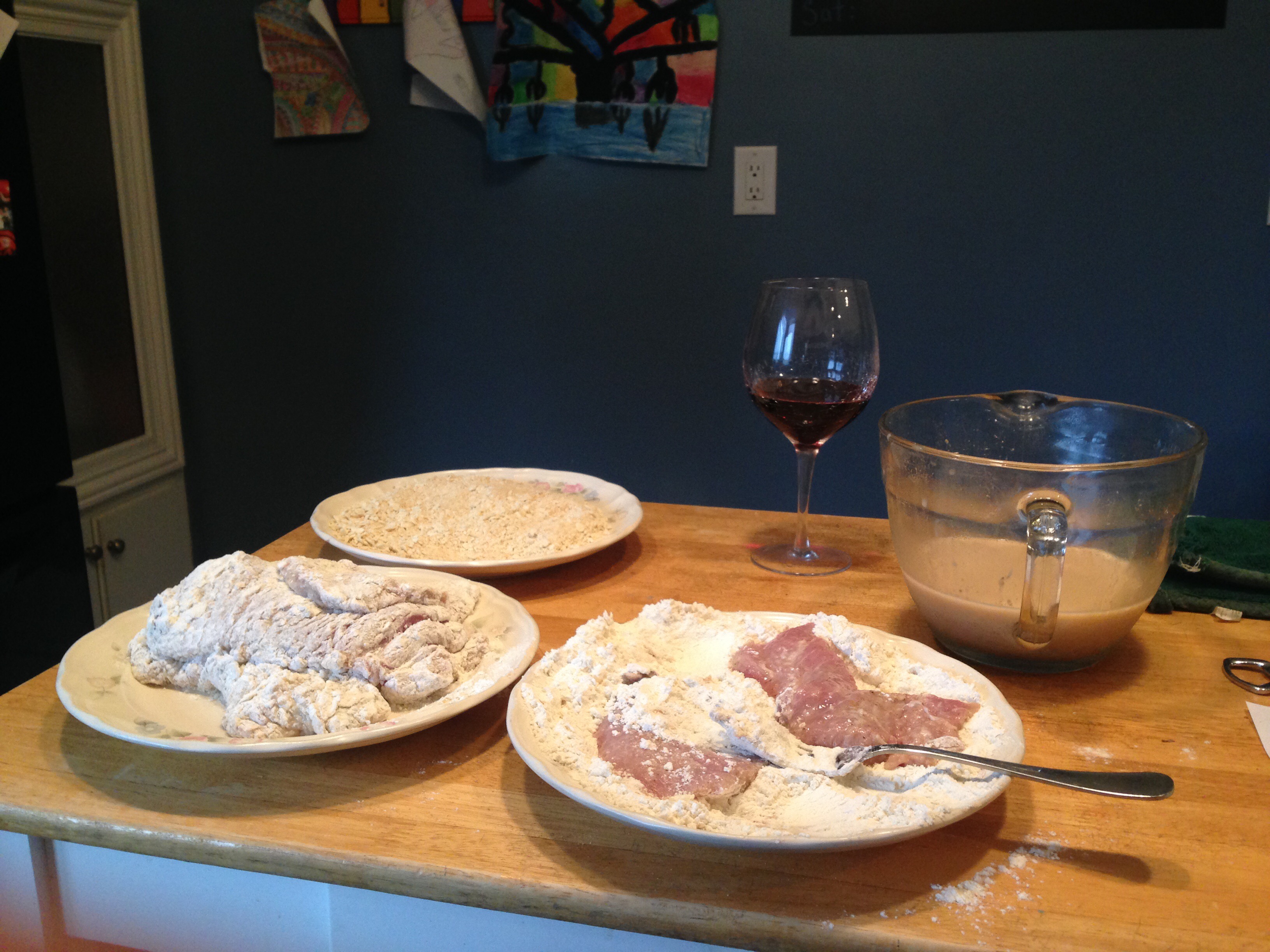 (Yes, the wine was necessary. It was a rough week. Don’t judge. And red wine is good for your heart, which I needed to counteract the next step of this process.)

Then, the cutlets are deep fried in peanut oil. God, I hope no one at these state fairs have a peanut allergy. They would break out into hives just watching this deep fried. Just like I could feel my arteries hardening while frying this stuff.

By the way, I mean no disrespect to the good people of Indiana. I have nothing against deep fried food. I love a deep fried calamari as much as the next guy. Mozzarella sticks? My house or yours? Potato on stick—delish. I’ve even had a deep fried Oreo (not my thing, but I tried it). We OWN a deep-fryer.

But pork tenderloin remains in my head as a “healthy” dish (albeit, a boring dish), and the idea of deep frying it was turning my stomach. Even though we used a vegetable instead of peanut oil, I could practically feel my arteries hardening as hubby fried: 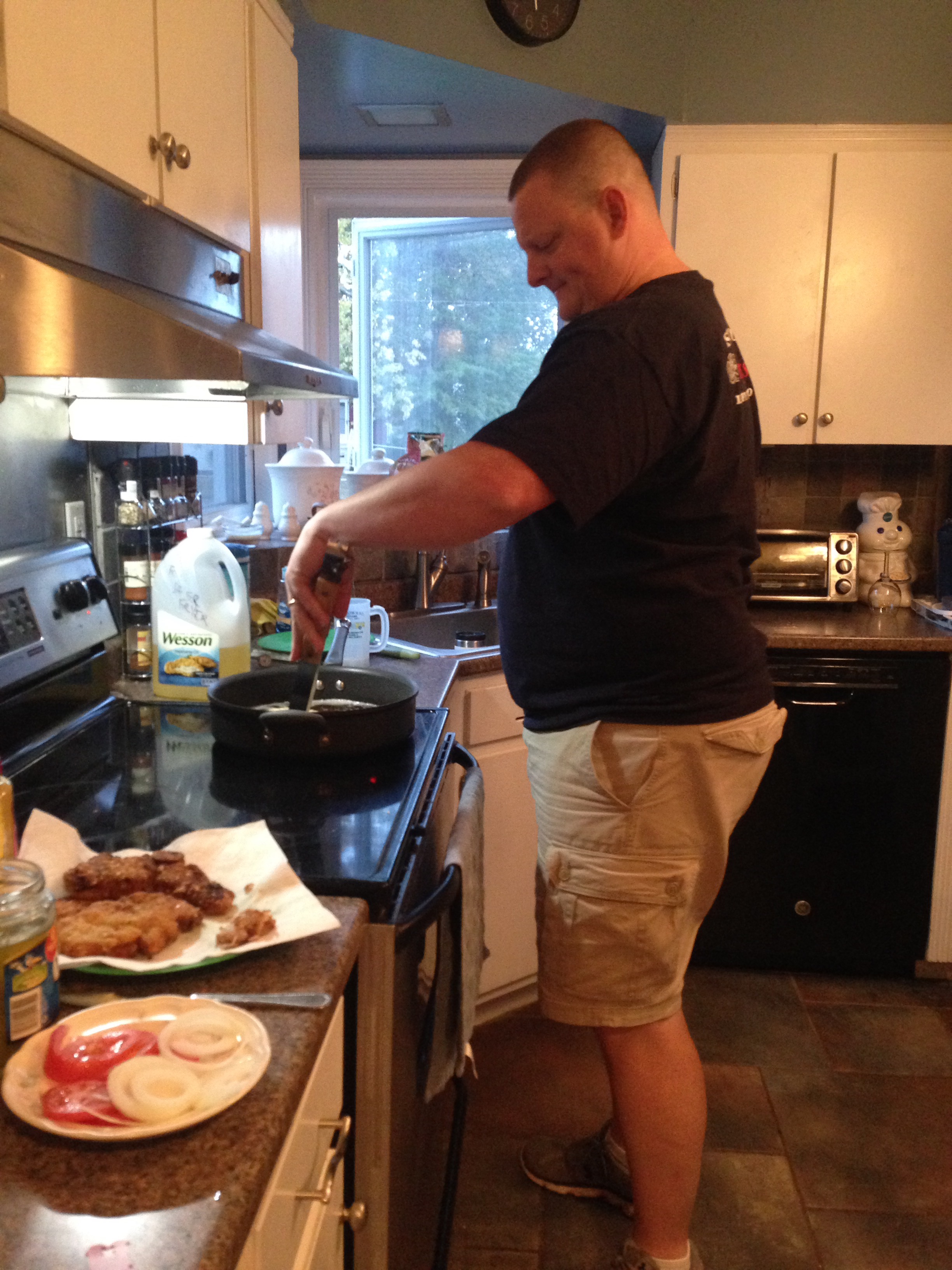 The next step was to create the sandwich. A sauce is made by mixing mayo and mustard and swiping it on the inside of a hamburger bun.  The sauce was actually pretty good. It was probably my favorite part of the meal. Then you pile on tomato, lettuce, onion and pickles and voila, there’s your sandwich: 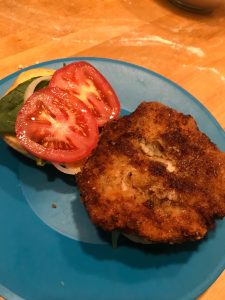 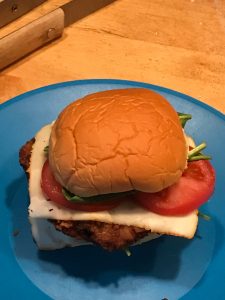 Hubby cheated and put cheese on his sandwich. I didn’t feel this was fair because cheese would have made the sandwich much more palatable for me. I just could not get over biting into the sandwich and getting a whiff of fried pork. It just felt wrong to me.

Putting extra pickles on my sandwich and more of the sauce helped disguise the “smell” which hubby told me I was “crazy” for smelling. As a result, I gave this dish a 4 out of 10. Everyone else in the house liked it a lot more than I did and gave it more like a 7.

Maybe some of you would like this kind of sandwich, so here’s the recipe below. (I halved it because we had enough sandwiches for an actual state fair population and the dog ate more than half. He also ate the greasy paper towels out of the garbage and had diarrhea for two days, but I’m sure that had nothing to do with the sandwiches.)

And if you’re from Indiana, can you PLEASE tell me there is life beyond sugar cream pie and pork tenderloin sandwiches??? I may have to send you a pizza and a sub if you don’t.

Cut the pork into equal pieces and pound flat with meat mallet. Whisk together egg, buttermilk, garlic, cayenne pepper and salt and pepper in a bowl. Add pork and refrigerate overnight (or at least 4 hours).
Crush crackers and transfer to plate. Pour flour on another plate. Dredge each piece of pork in the flour and then dip back in the buttermilk. Then coat with the cracker crumbs. Heat 1/2 inch of oil in a skillet (or deep fryer) until deep-fry thermometer reads 350 degrees. Fry 3 minutes on each side—drain on paper towels.
Add to hamburger buns and add toppings as desired.