Skip to content
The Bad Mommy Cooks the USA
By Badmommy April 15, 2018April 18, 2019
FYI...my posts may contain affiliate links. This means that if you click on those links and make a purchase, I will receive a small commission at no cost to you. And those commissions are what makes it possible for me to blog. Thank you!

When you live as close to New York City as we do (we can literally see the skyline from our town), it’s hard to imagine New York cuisine that we haven’t consumed. I mean, New York City is just as eclectic as Jersey is with food. If you can’t get a type of food in NYC, it doesn’t exist.

There are deli sandwiches, real bagels (not that frozen crap), authentic Italian food (yeah, there’s a difference), and real pizza (there’s DEFINITELY a difference). The City’s influences have spilled over into our neck of the woods—many of our restaurants here are just as good (and some even better) than New York.

I Can’t Mess This Up—My Rep Is At Stake

So what could I cook? We needed a food that would not be tainted by my lack of cooking. Something that I could do justice. I knew I couldn’t make pizza (I’ve already tried that already…see The Great Cooking Experiment ). I’d never be able convince the family to eat the same deli sandwich. I didn’t feel like working around who won’t eat pastrami or turkey (and contrary to popular belief, I’m not running a diner).

Attempting something gourmet was out of the question as well. Hubby suggested combining the two most popular foods, pizza AND bagels and making pizza bagels—gross. I suggested we take a ride over the bridge (or through the tunnel, or on a train—so many ways to get to the city!) and have a authentic NYC meal. I was shot down.

I Came Upon Our New York Meal Entirely By Accident

When we went to Ocean City last week, it was ridiculously cold, despite being Spring Break and all. Believe it or not, there’s plenty to do there, even when it’s cold. For starters, there are tons of outlet stores, including a kitchen tools store. Hubby loves this store. That’s where he got his cast iron skillet that he used for the South Carolina meal. This time he picked up a flour sifter. Apparently he’s always wanted one. It was 4 bucks—I told him to knock himself out. (Insert giant eyeroll here.) The other day I was searching for recipes that would require me to actually use this flour sifter. That’s when I came across a recipe for New York Crumb Cake on Epicurious.

It Should Be Called “Yum Cake”

Who doesn’t like crumb cake? It’s combination cake and sugary crumb topping can make even the most devoted dieter swoon. One time hubby and I actually walked 6 miles for crumb cake. Good crumb cake. Because not all crumb cake is created equal. Oh no, siree. A dried out cake is a disgrace that you don’t ever want to endure.

Oh and to clear things up…crumb cake is NOT the same as coffee cake. Coffee Cake does not have crumbs on top, which are the star of the cake. Anyhoo, the ingredients are simple—you probably have most of them at home already and you can make this crumb cake RIGHT NOW. (You might have to go out for the secret ingredient, though.) 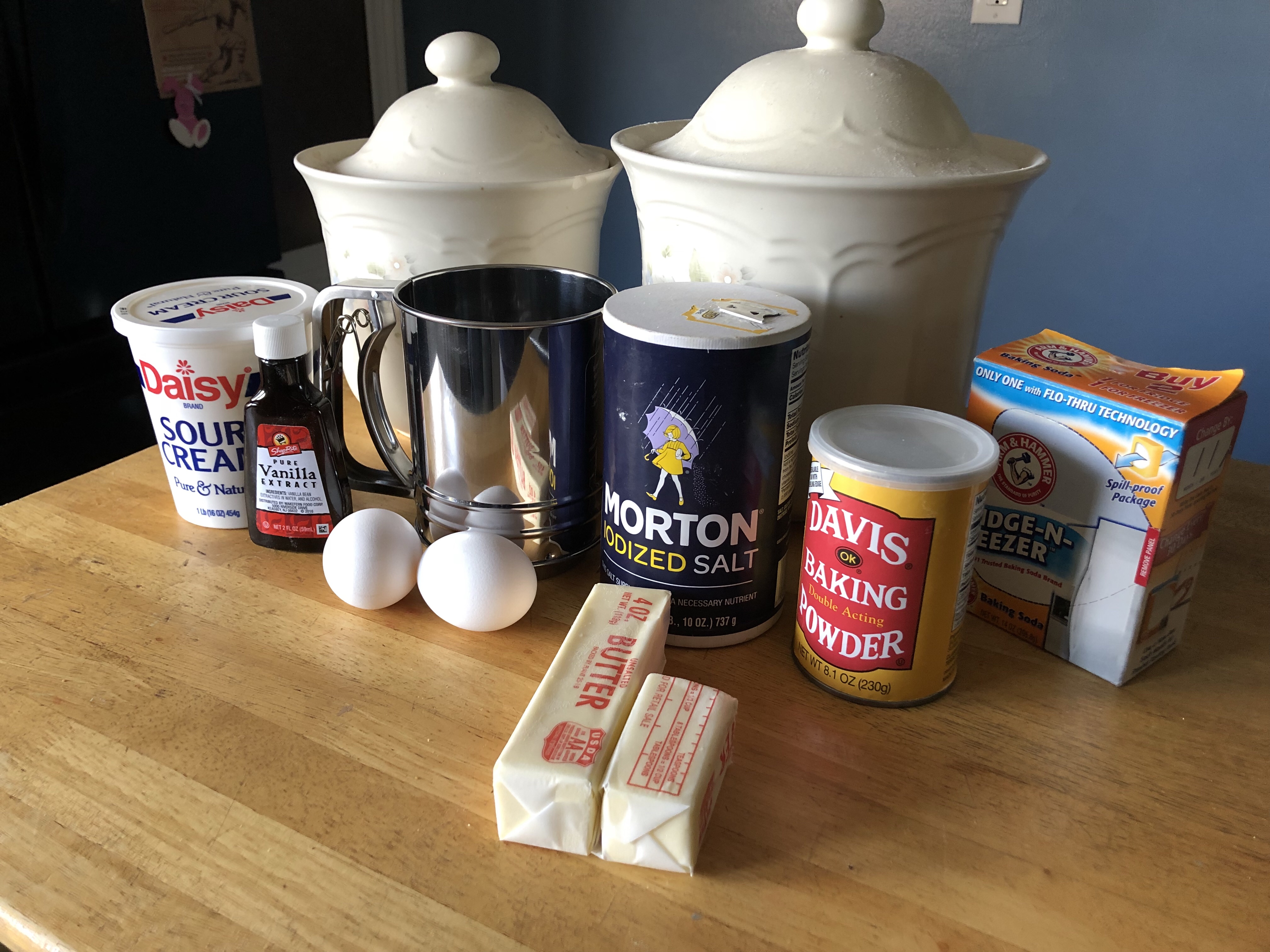 The secret to a moist (ah, moist…the world’s most hated word) cake is actually sour cream. Yeah, you wouldn’t think such a sweet treat would include sour cream, but any crumb cake recipe worth its salt does. This recipe also calls for an obscene amount of butter—which is probably the reason each piece is a whooping 660 calories. Yikes. But it’s so worth it for homemade, not dried out crumb cake.

Ingredients for the topping

Ingredients for the Cake

Like I said, I prefer my crumb more crumbly. I would use a recipe that uses CAKE flour instead of all purpose flour for the topping in the future. And I would add confectioner’s sugar. Other than that, the cake was nice and moist and yummy.
Believe it or not, the family did not eat the crumb cake until the next day (after it had been covered with foil). I realize that was a no-no and I should have put it in a Tupperware container, but I really thought they would devour the damn thing in one day. But anyway, it was still good…but not as good as it was Day 1. 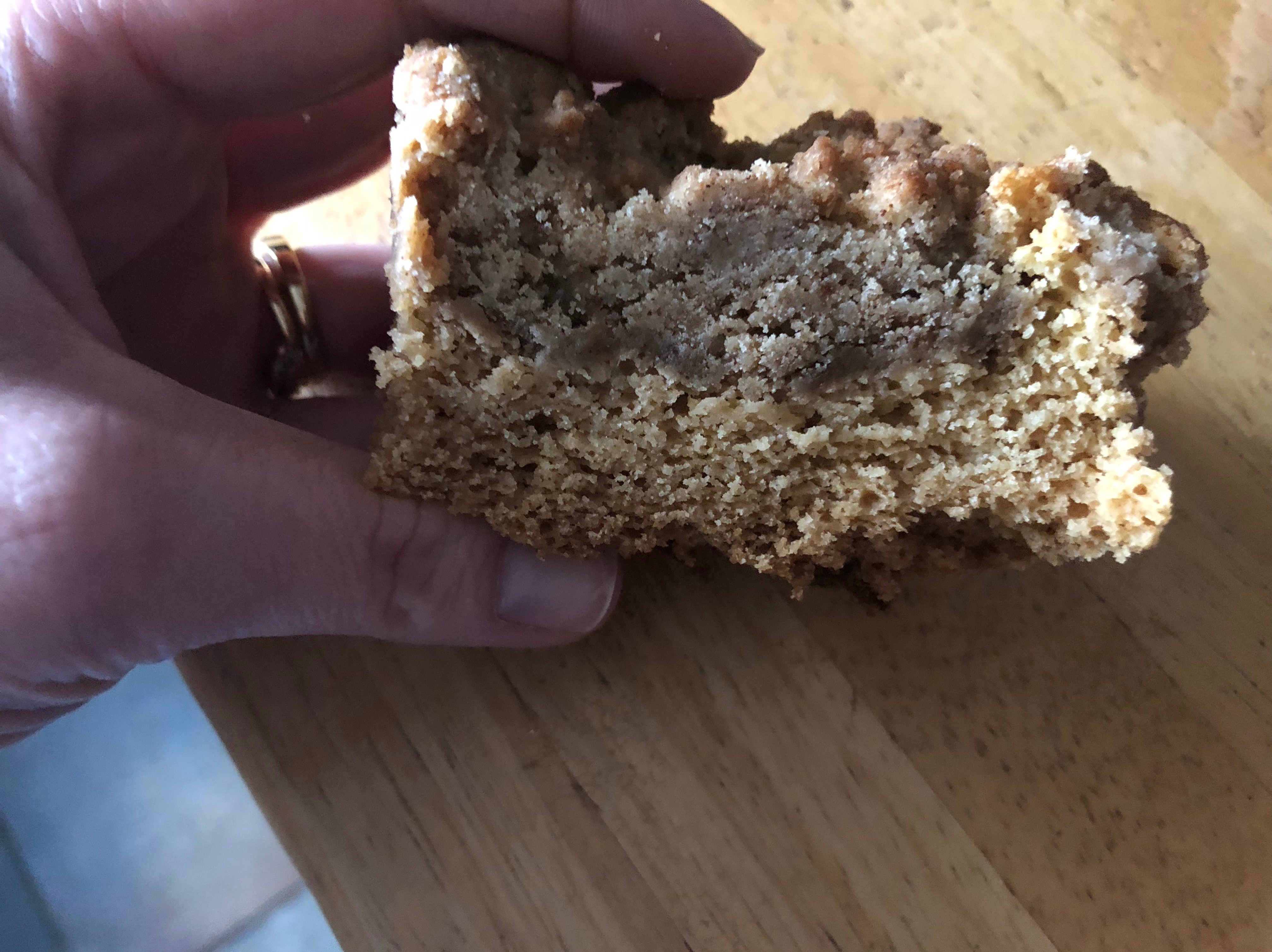 I’ll have to try this one again soon—I’d highly recommend it if you’re a fan of New York Crumb Cake.