Skip to content
The Bad Mommy Cooks
By Badmommy September 9, 2018May 13, 2019
FYI...my posts may contain affiliate links. This means that if you click on those links and make a purchase, I will receive a small commission at no cost to you. And those commissions are what makes it possible for me to blog. Thank you!

I made shrimp pasta the other day and I MUST share the recipe. You guys know if I share a recipe with you—outside of our 50 state challenge—it’s gotta be good, right? Criteria for a good recipe in my book are as follows:

This Shrimp Pasta Recipe Has All Three

Yah! If you like penne a la vodka sauce, you should definitely try this recipe. It’s similar in consistency and taste except you use red peppers instead of tomato as the base.

I made this a few months ago after seeing a pin on Pinterest (of course). I’m beginning to think I need a 12 step program to halt my Pinterest dependency. Hehe. The first time I made this shrimp pasta with red pepper sauce (originally from a recipe on Cooktoria), I followed the directions carefully, and although the family liked it, I realized it could use some tweaks specific to our needs.

For me, the sauce was a bit too peppery the first time. I found myself snuggling up with a bottle of Tums the rest of the night, the peppery undertones replaying in my esophagus.

I counteracted that the next time I made the recipe by adding more half and half and decreasing the actual amount of peppers (but leaving the pepper juice the same).

This time, no repeat of the meal in my throat, but the sauce was too watery, and Hubby said it needed more “heat”. (Sure, he doesn’t have a Tums addiction…)

The third time, it was “just right”. I went with the same amount of peppers and didn’t use the pepper “juice” in the bottle. I added more paprika and crushed red pepper. I also added fresh basil for the hell of it. It was soooooo good. In fact, I am currently warming up the little bit of leftover shrimp and sauce we had and having it for lunch as we speak. Or as I type.

It has to be a really good meal for Hubby to compliment my cooking (I think he’s under the impression that it depreciates his value if I actually start cooking well or something…). So when he tells me that this is “A very tasty sauce” that basically means he’s in love with the sauce and wants to marry it.

Twenty one years of slaving over the stove on Sundays making pasta sauce for hours on end and he’s NEVER said anything like that. In fact one time I think he might have said something along the lines of “You’re getting better, this one is actually edible.” 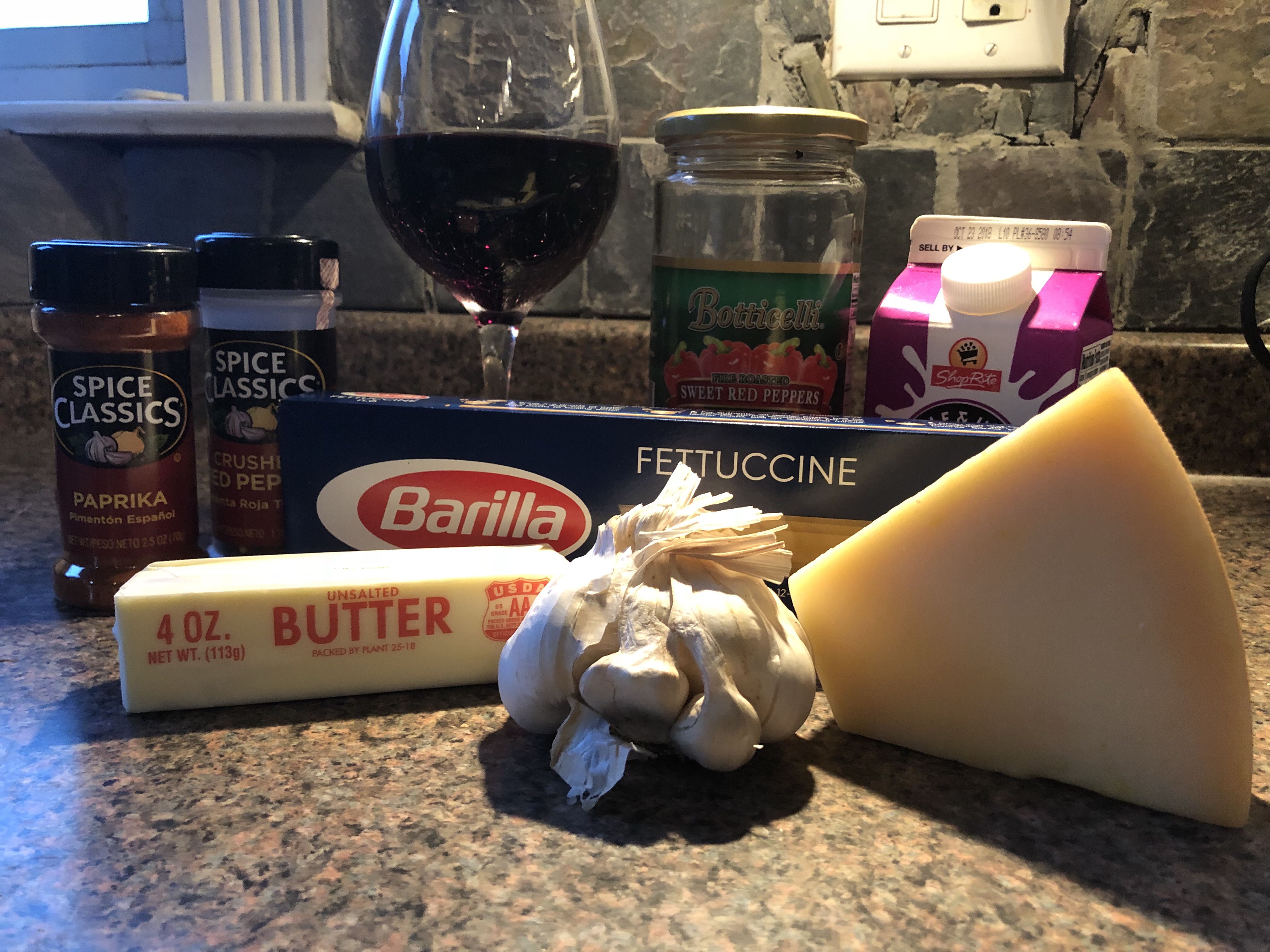 No more being chained to the stove to make sauce. The actual cooking process is so quick that I was barely able to boil the water and cook the pasta in the time it took to make the sauce. My advice, make the pasta first. If you don’t like fettuccine, penne or rigatoni would work just as well.

While the water is boiling, puree the red peppers in the blender or whatever blendy thing you have. We currently have the Ninja (which I won at a tricky tray earlier this year) and I highly recommend it. It’s so convenient for jobs like this and it doesn’t take up a lot of room on the counter.

Then heat up your skillet and add butter. When butter melts, add shrimp, garlic, paprika,  and crushed red pepper. Cook on medium high heat until shrimp is pink. Reduce the heat and remove the shrimp.

Add the pureed red pepper and stir often for about 10 minutes. Throw in some fresh basil if you’d like. Then add half & half and grated Parmesan cheese. Cook for another 3 minutes. 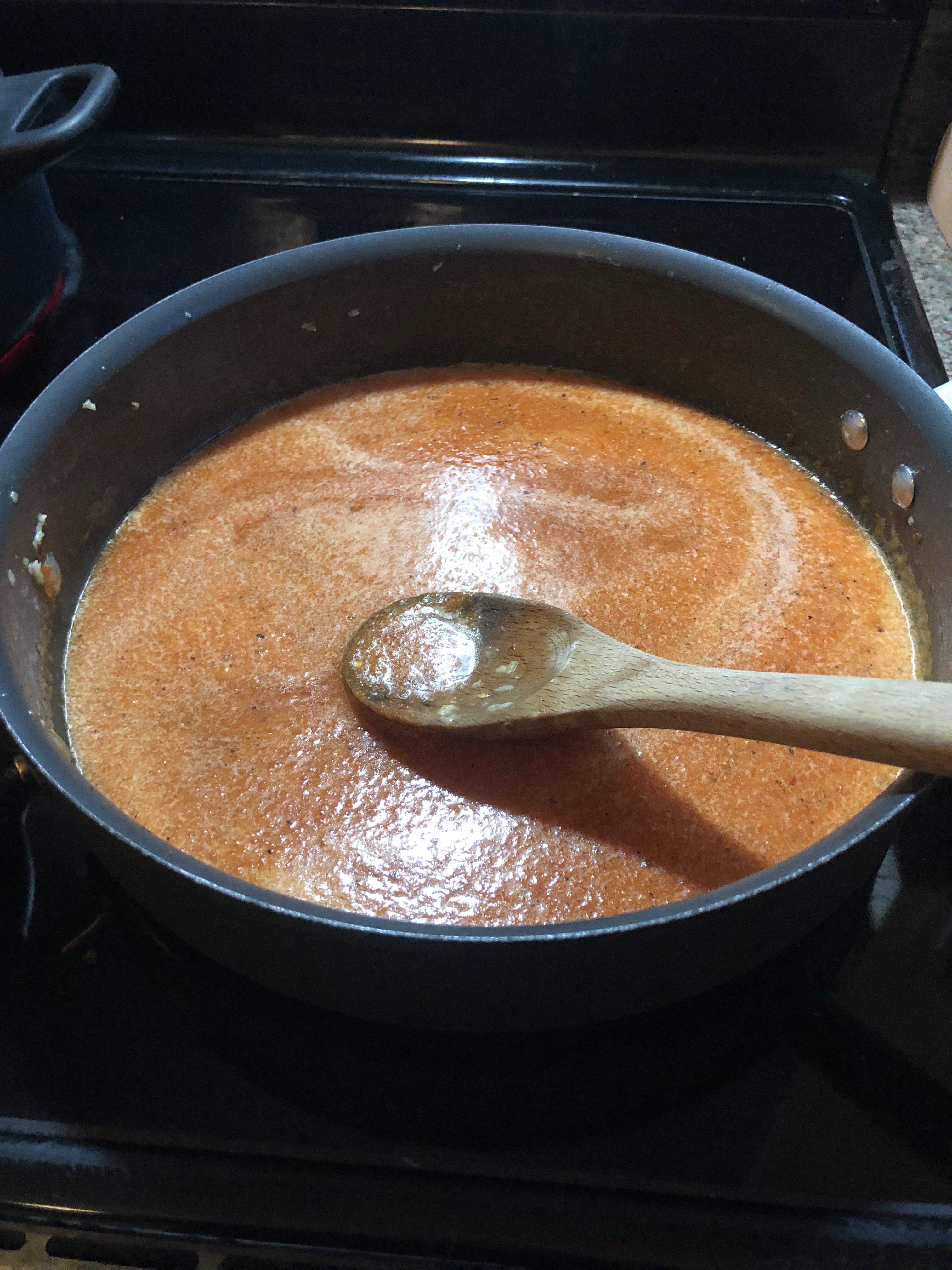 Turn off heat and add shrimp back to the pan. Toss in the fettuccine or penne and mix well. Voila! Your meal is done. Yes, that quickly!