Skip to content
Parenting Humor
By June 12, 2013March 31, 2019
FYI...my posts may contain affiliate links. This means that if you click on those links and make a purchase, I will receive a small commission at no cost to you. And those commissions are what makes it possible for me to blog. Thank you! 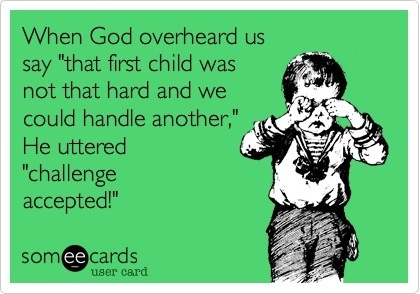 Yesterday, some really annoying woman who is pregnant with baby number 3, asked me, “So, when are YOU having another one? You’re not getting any younger, you know.” She proceeded to elbow me in the ribs like we were sharing some private joke.

I did not want to be elbowed in the ribs. I didn’t like her humor. I wanted to punch her in the face.

I hate these people. I call them baby pushers. I don’t know why baby pushers exist. Maybe they’re like Jehovah’s Witnesses and get extra points in heaven if they get people to procreate. Or maybe it’s simply a case of misery loves company.

Either way, they’re a pain in the ass.

I am really going to go out on a limb here and probably will make some enemies, but I said to her, “Never in a million years. In fact, sometimes I wish I only had one.”

The obnoxious party clasped her hand over her mouth and gasped, “Oh, you don’t really mean that!”

Uh, yeah I do. Sorry if this sounds unforgiving, but some days, I wonder why we didn’t stop with one.

Don’t misconstrue my words…I’m not saying my oldest is my favorite or I don’t love the youngest (even though she definitely gets the prize for being my bigger hemorrhoid). I’m saying, two is much more difficult. And you’re saying, “Well, duh…didn’t you realize that? Can’t you do the math?”

And my response is, Of course I knew it was harder. I assumed it would be TWICE as hard. Not FIFTY times.

After the oldest was born, I enjoyed him so much, that I couldn’t bear the thought of not having another one. He was pretty easy going baby and I had time for myself. I laughed at the frazzled new moms who said they didn’t have time to shower. My house was clean, I worked out regularly, had time for hubby and friends AND met my child’s every need. I assumed I was gifted or something because I was a damn good mother. Parenthood, at that point in time, was a breeze so I wanted another one.

Apparently, I was a naïve moron. Much to our dismay, having the second child was not as easy as having the first. I went through the misfortune of being rendered infertile for reasons I will not bore you with.

Suffice to say, we needed to actively decide to have another child and go through IVF because of the infertility issues. (oh, yes, another taboo subject…maybe I’ll delight you with the anecdote of THAT saga some other time)

When the youngest came along, we started dealing with these glitches we had never had before with just one child. Parenthood was not so much a picnic any longer. When I was alone with the kids, I was outnumbered. (sometimes, even when their father WAS home, I was outnumbered because he can act like a child himself…sorry dear).

Despite what many deceptive mothers with multiple children will lead you to believe, older children are rarely helpful in the least when it comes to taking care of the younger siblings. Yeah, I know, I was duped into optimistic thinking by some sadistic mother of six who swore up and down that the more kids she had, the easier her life got. Her husband must be practicing some sort of Kool-aid mind control to get her in bed with him and she actually believes that bull crap.

In fact, the older ones can actually be MORE of a hassle when you have a baby, because all of a sudden, the four years (or three or whatever) of individual attention that you heaped upon them, is suddenly forgotten. All they know is they’re not getting ALL your attention. They start acting up and throw temper tantrums because you can’t dress them or feed them because you’re taking care of the younger one.

You have no idea how to manage your time because someone is going to be pissed off no matter what you do. Usually, the baby wins out because she can actually shatter your ear drums with her cry. It’s exhausting in a way you never understood with one child.

Baby pushers will say, “Oh they need a sibling. They need to learn to share.” Ok, can’t they learn to share in preschool? Isn’t that what I paid a ridiculous tuition for? I’m convinced I could have bought them cars for less than we paid for preschool. And in preschool I’m not the one who has to referee the “sharing games.”

Because detaching a handful of Legos that a maniacal two year old has snatched from a crying older sibling is one problem parents of onlies don’t deal with. Neither is the “I’m not touching you” game or the “repeating game”, both of which designed to make parents operating a moving vehicle drive straight into a guard rail while trying to swat at the children in the backseat.

Another reason baby pushers cite as needing more than one child is “They will be each other’s best friends when they’re older and everyone needs a sibling when their parents are gone.”

Um, who said this is gospel truth? Is this written in stone somewhere? Now, truth be told, most siblings who are at each other throats as children do tend to get along better when they’re adults. I hated my sister’s guts growing up and now I couldn’t imagine life without her. In fact, making fun of our parents wouldn’t be half as much fun doing it alone. We can keep ourselves amused for hours with tales of their latest antics.

However, I know plenty of grown people who still can’t stand their siblings or don’t even keep in touch with them at all. Their parents are rolling over in their graves wishing they had only had one.

I have a friend who only wants one. It is none of anybody’s business WHY she only wants one, but those damn baby pushers are relentless. They constantly allude to her “second child” and tell her she will regret not having another or it’s selfish to have an only child.

I have to admit, I have even joined in the foray. I know, I know…what a hypocrite! But I rarely mention baby number two and when I do, it’s always because I’m having buyer’s remorse (hehe…the second one was very expensive) and I’m in a state of envy.

Because honestly, she’s a lot smarter than I was. She said to herself, “Life with one is good. Let me enjoy it.” Dumb me said, “Life is good. Let’s complicate it.”

Studies have shown, mothers of one child are much happier than mothers of two or more. Hmmm. Maybe they’re on to something. Perhaps I’m a bit selfish for thinking this way, but I doubt there is one mother alive who has not flung themselves into bed at the end of a harrowing day of vacuuming Goldfish crackers out of the couch while preventing the children from blinding each other with juice box straws and not thought, “Why the hell did I have kids anyway?”

I’m sure the rewards are endless when they’re grown, and some days my heart is ready to burst from love for the little monsters. But a large percentage of the time, between juggling endless activities and mumbling to myself, I seriously doubt my sanity. Damn those maternal hormones for hoodwinking me in the first place!

Well, they’re not getting me again. Because in the words of Taylor Swift, I’m NEVER, EVER… having another. The baby pushers can kiss my keister.

2 thoughts on “The Baby Pushers”