Skip to content
The Bad Mommy Cooks
By Badmommy December 29, 2017April 18, 2019
FYI...my posts may contain affiliate links. This means that if you click on those links and make a purchase, I will receive a small commission at no cost to you. And those commissions are what makes it possible for me to blog. Thank you!

Merry Christmas, everyone! Okay, maybe Christmas was way more than a few days ago, but it’s taking me a little time to crawl out from the holiday rubble our house is buried in to post this blog.

Hubby and I have been making Christmas Eve dinner for the family for about twelve years now (we’ve had a few years when he’s been working that we’ve had to skip, though).

When I was growing up, my grandparents did Christmas Eve and it’s always been a fond memory of mine. My grandparents were Italian, so they would have the Feast of the Seven fishes. On Christmas Eve, no meat is consumed…only seafood. It is supposed to be comprised of seven different fishes/seafood, but over the years (after much obsessing over this fact), hubby and I have adapted it to serving whatever we feel like—we try to stick to seafood, though.

In the past, we have made wayyyy too much food and end up throwing a ton out (that is, whatever my mother doesn’t scrape into her pocketbook to feed her dogs with later on).

Plus, my father in law isn’t a fan of the seafood feast, so we usually have some sort of meat, too. (I don’t eat the meat because it was drilled in my head that eating meat on Christmas Eve is bad luck…or some other nonsense like that.) Okay, so our feast isn’t completely traditional, but we try, okay?

Believe it or not, it’s the only day of the year that hubby and I co-exist in the kitchen without wanting to stab each other. It’s kind of…nice actually.

That’s not to say things don’t get tense and we don’t yell and flip each other the middle finger on occasion. An emergency usually arises, resulting in me stomping off to the grocery store to retrieve some item that was inadvertently off the grocery list (usually by me).

Hubby takes his cooking Christmas Eve a hell of a lot more seriously than I do, believe it or not. He makes it difficult on himself because he wants to try new recipes and he refuses to use ingredients like imitation lobster or crab. If I even suggest it, he gets very stressed about it.

And to add to his stress, he’s been playing Santa Claus to the little kids after the meal and he gets neurotic about that as well. It’s a refreshing change to our usual roles.

This year my in-laws were visiting hubby’s sister in Florida and my brother’s family was also not coming—I told Hubs we needed to scale back. He looked at me like I had slapped him clear across his Santa Claus cheeks. I held my ground and insisted.

I even surveyed the family to find out what dishes were their favorite—unfortunately their responses varied so much we ended up making a lot of what we usually do—we only cut out two or three dishes.

However, everyone was a big fan of hubby’s Crab Corn Chowder (I may have mentioned it in my Massachusetts blog ) so we needed to make that. There are a ton of ingredients that go into this, and it’s very labor intensive, so instead of pulling his hair out Christmas Eve, he made it the night before: 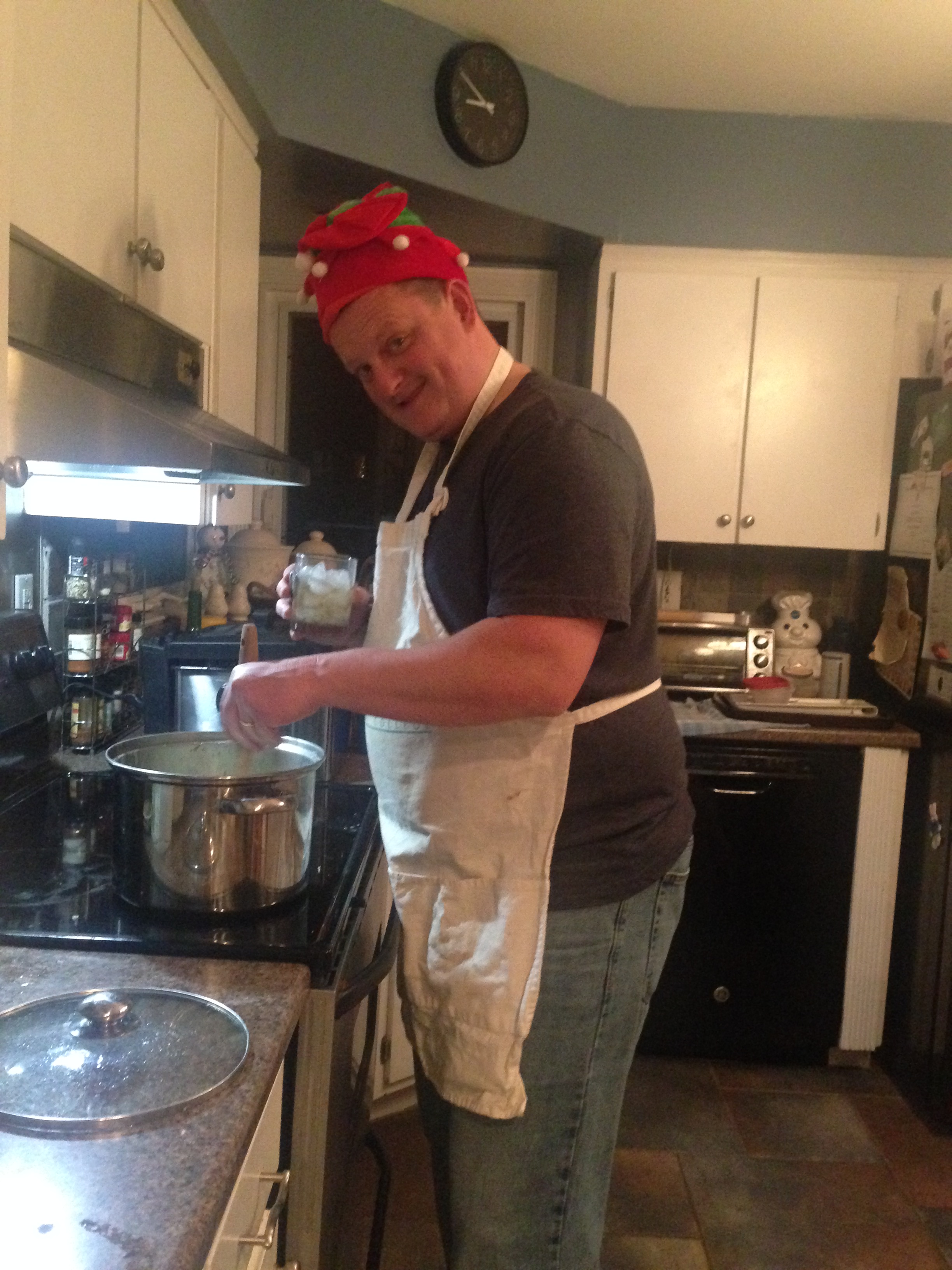 Yes, that’s Scotch in his hand. He’s like ninety-seven years old sometimes. Here’s the result (*You can click below the pictures for the recipes!): 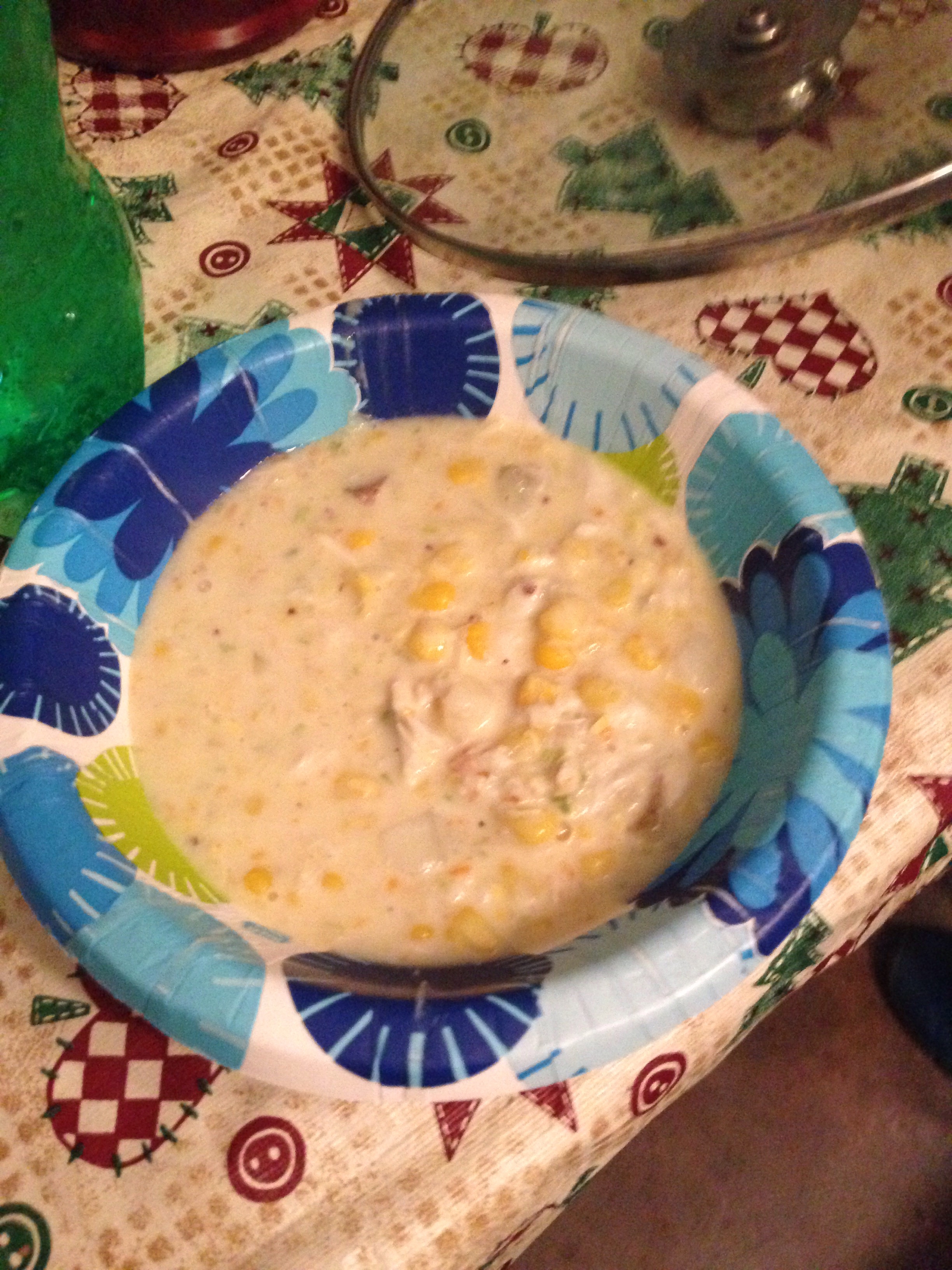 So yummy—and great on a freezing cold day. We’ve eaten it every day this week since the weather’s been so appropriate. It’s also good with cornbread. The night before he also made his crab cakes: 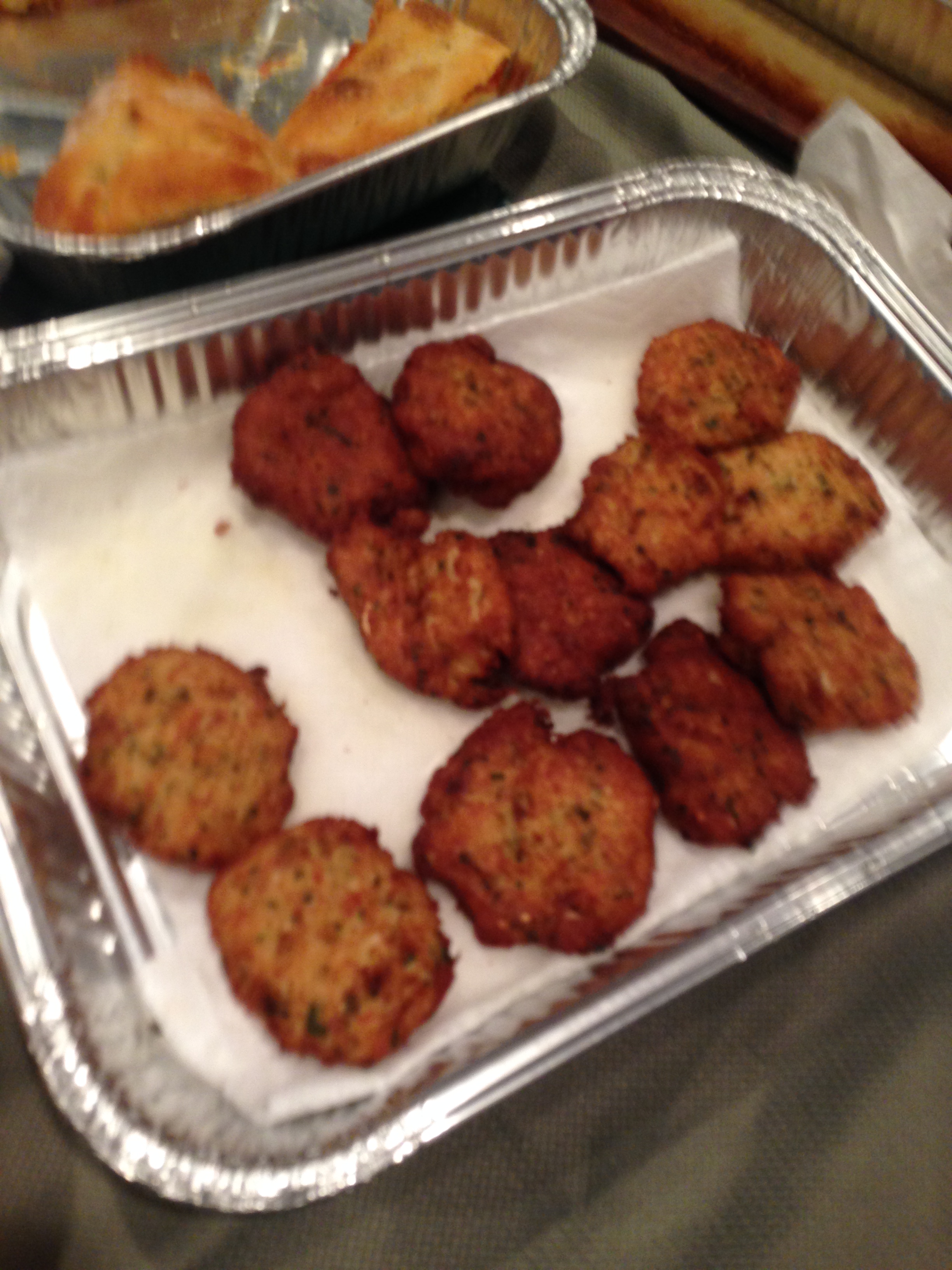 He just got this recipe from a cooking class he went to. I wanted him to make crab/shrimp sliders with pimento cheese, but he thought these would be easier. They were okay, but I do love shrimp sliders.

I made “Stromboli” of course and hands had to be slapped away—my nephews were grabbing it before it was done. This photo was taken literally thirty seconds after I put it on the table: 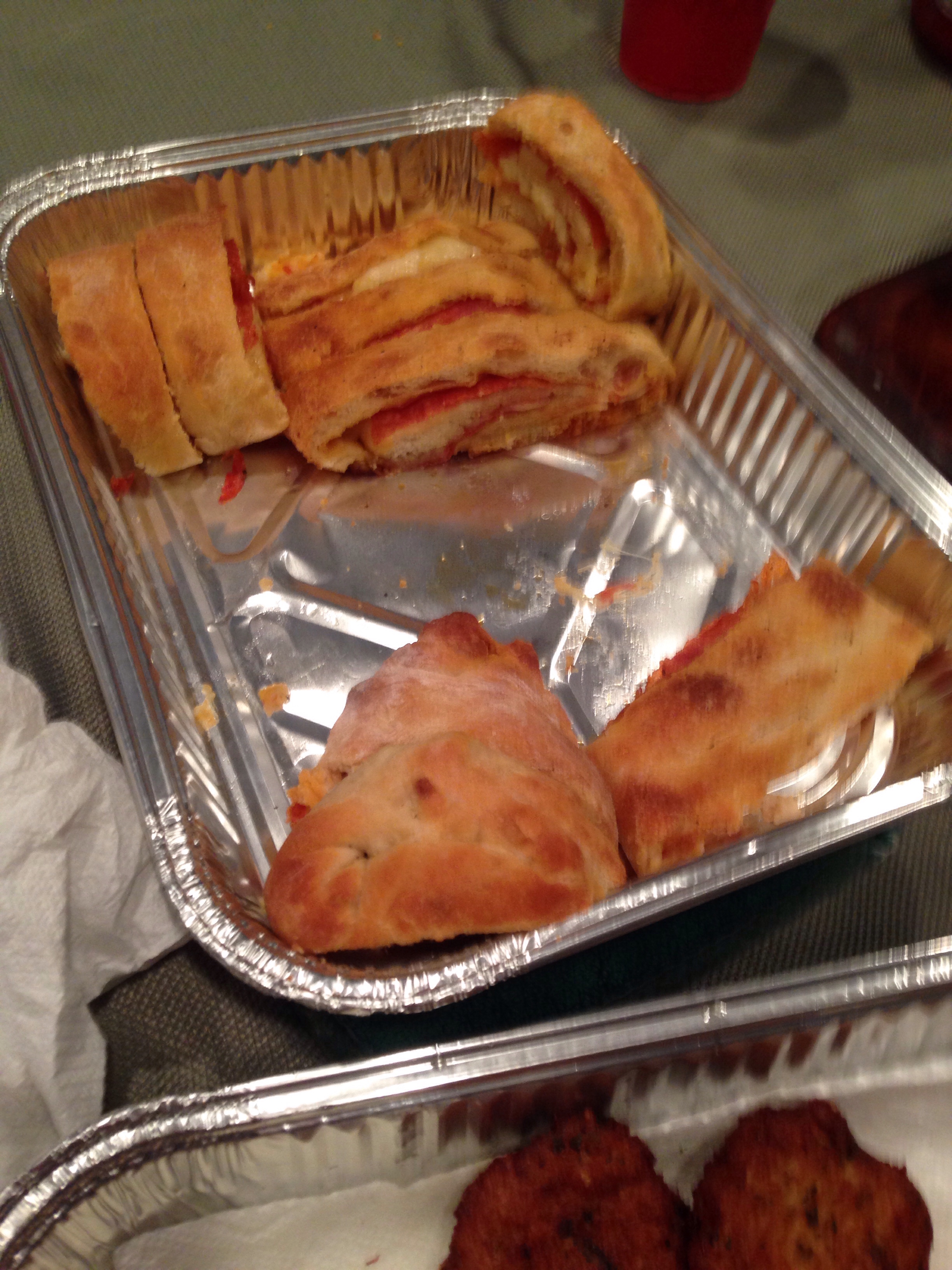 I just realize that we always have Stromboli and antipasto on Christmas Eve, despite that pepperoni is a meat…I wonder why that’s okay? Anyone out there know the answer? Or was this some tradition that my grandparents adapted without regard to the meat situation? 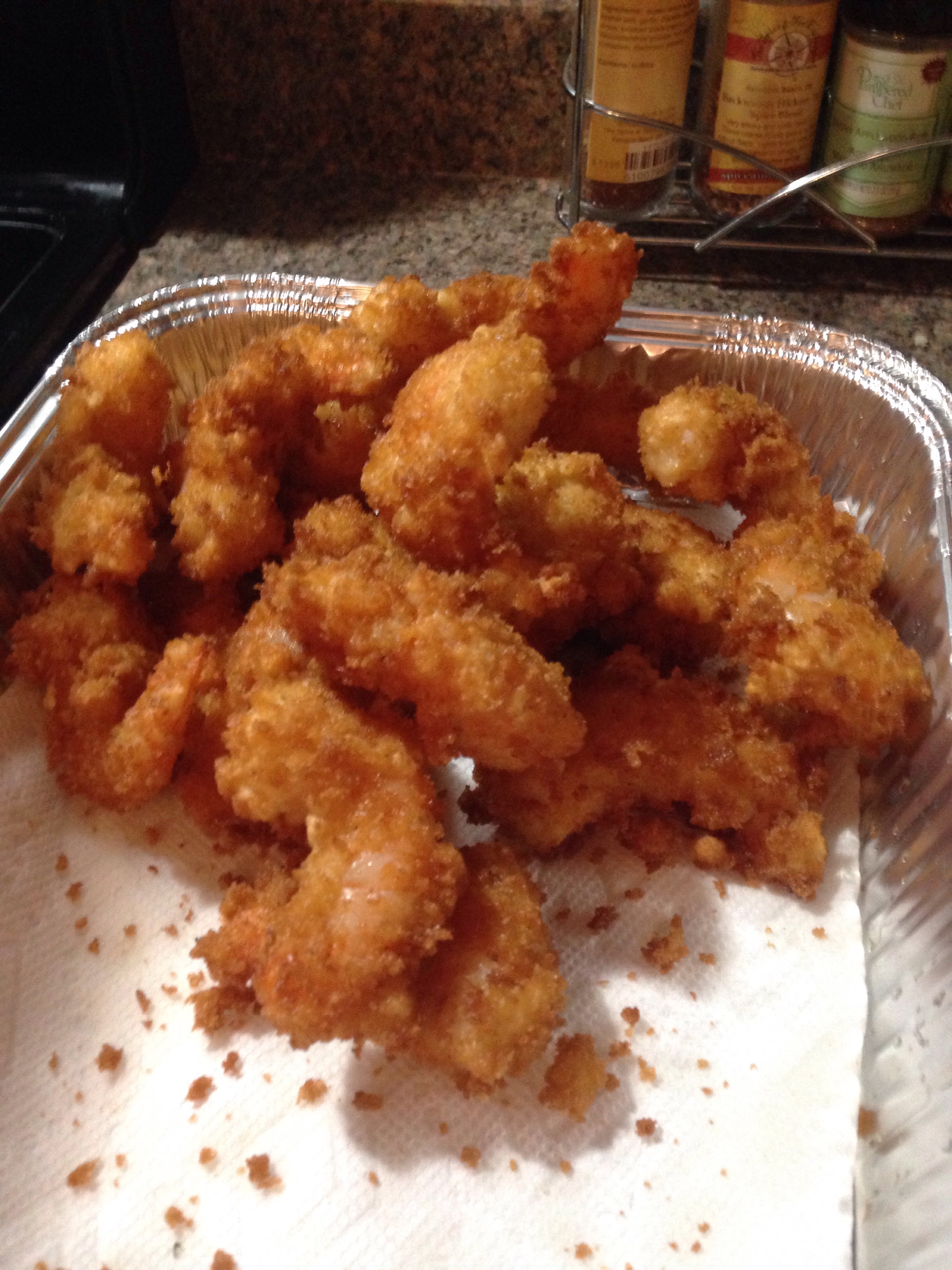 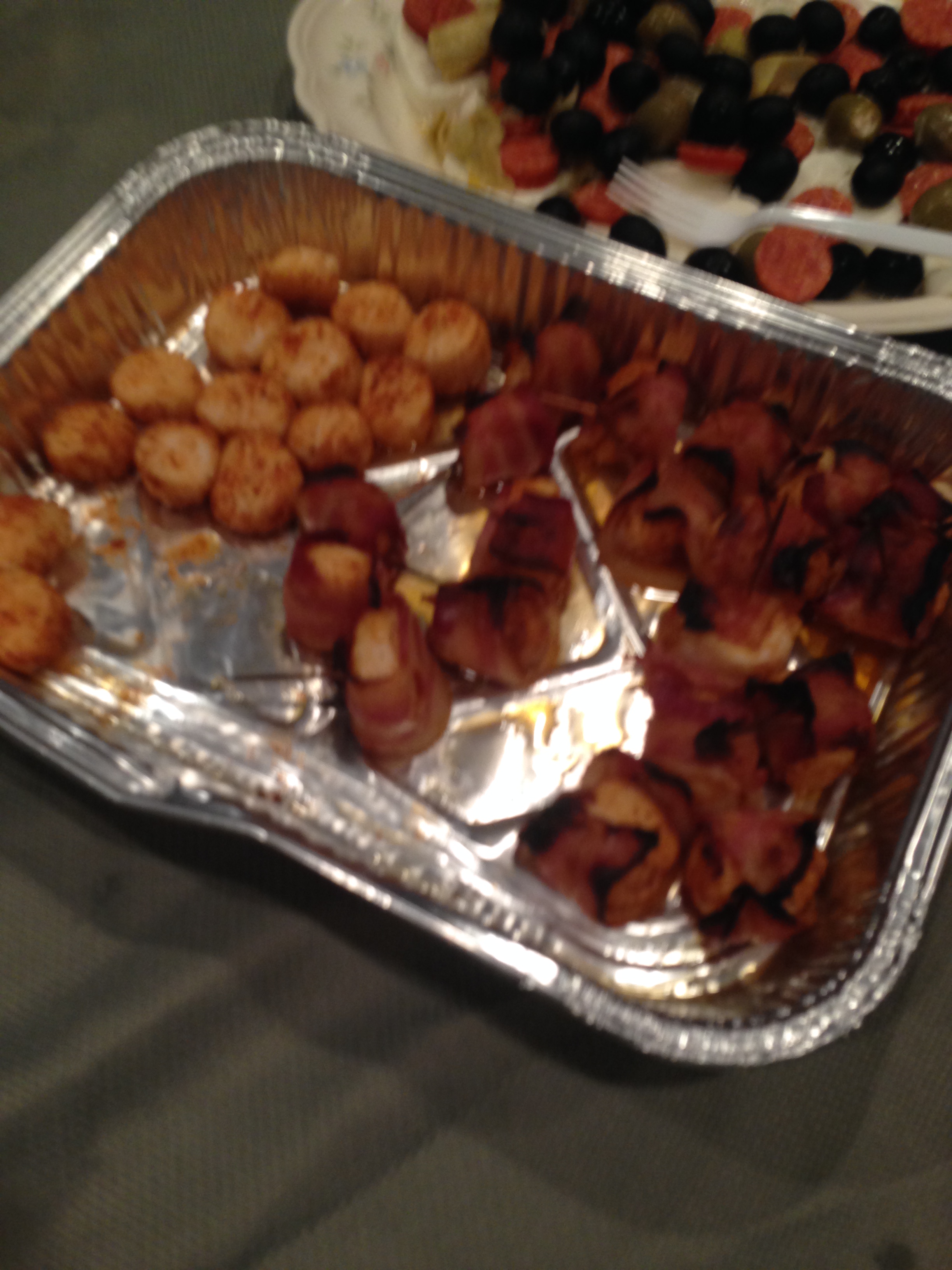 I also made calamari which is a bitch to bread. It took me about an hour to bread one pound. You’ve got to get the breading on the inside of the ring to make sure it doesn’t fall apart. My efforts were not wasted: 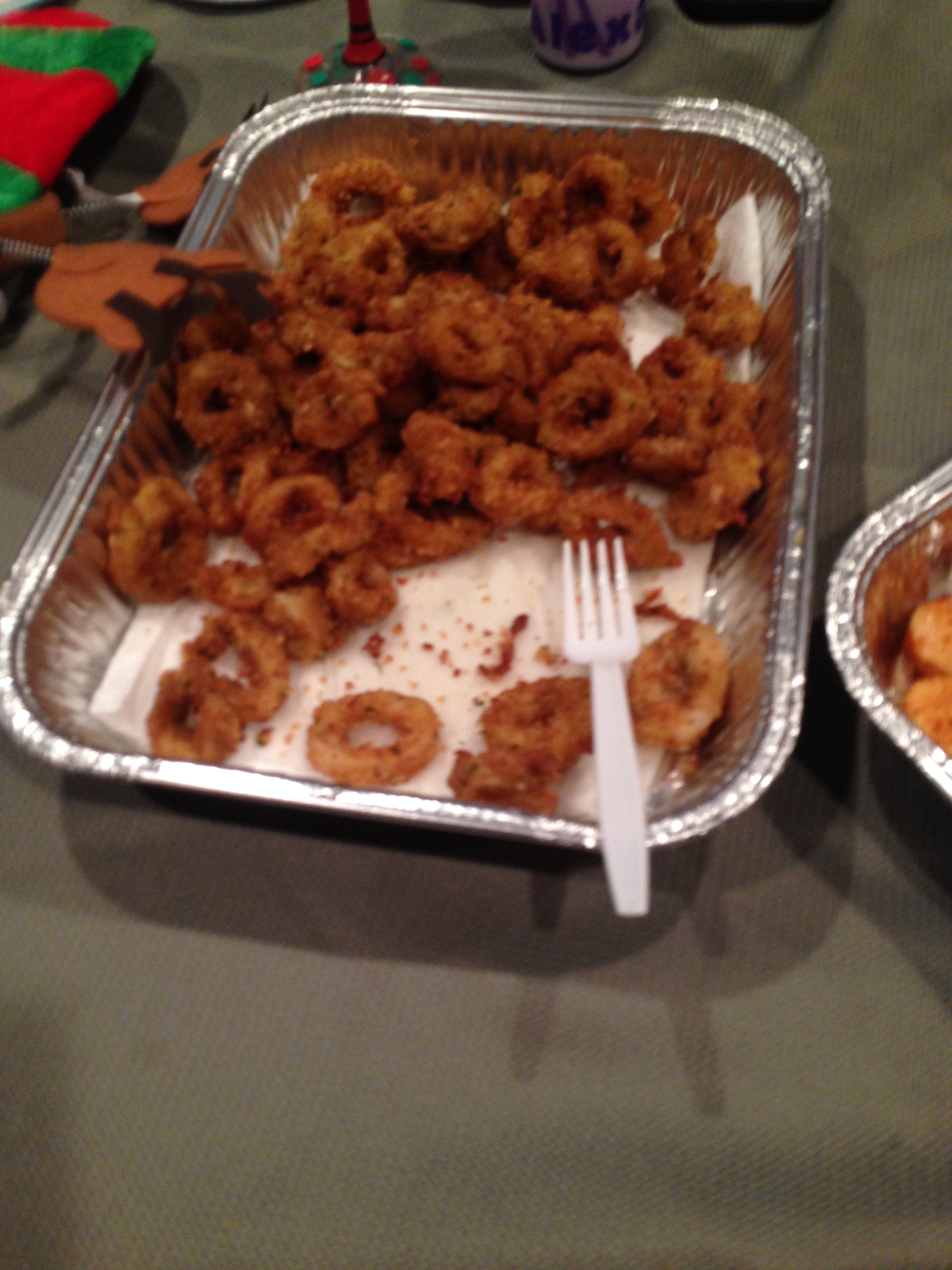 For dessert, I made my great-grandmother’s honey balls (struffoli for you hard core Italians out there). No one really eats more than one ore two of them, but the nostalgia is necessary. Especially since I refuse to make any kind of holiday cookie anymore until hubby lets me buy a new oven: 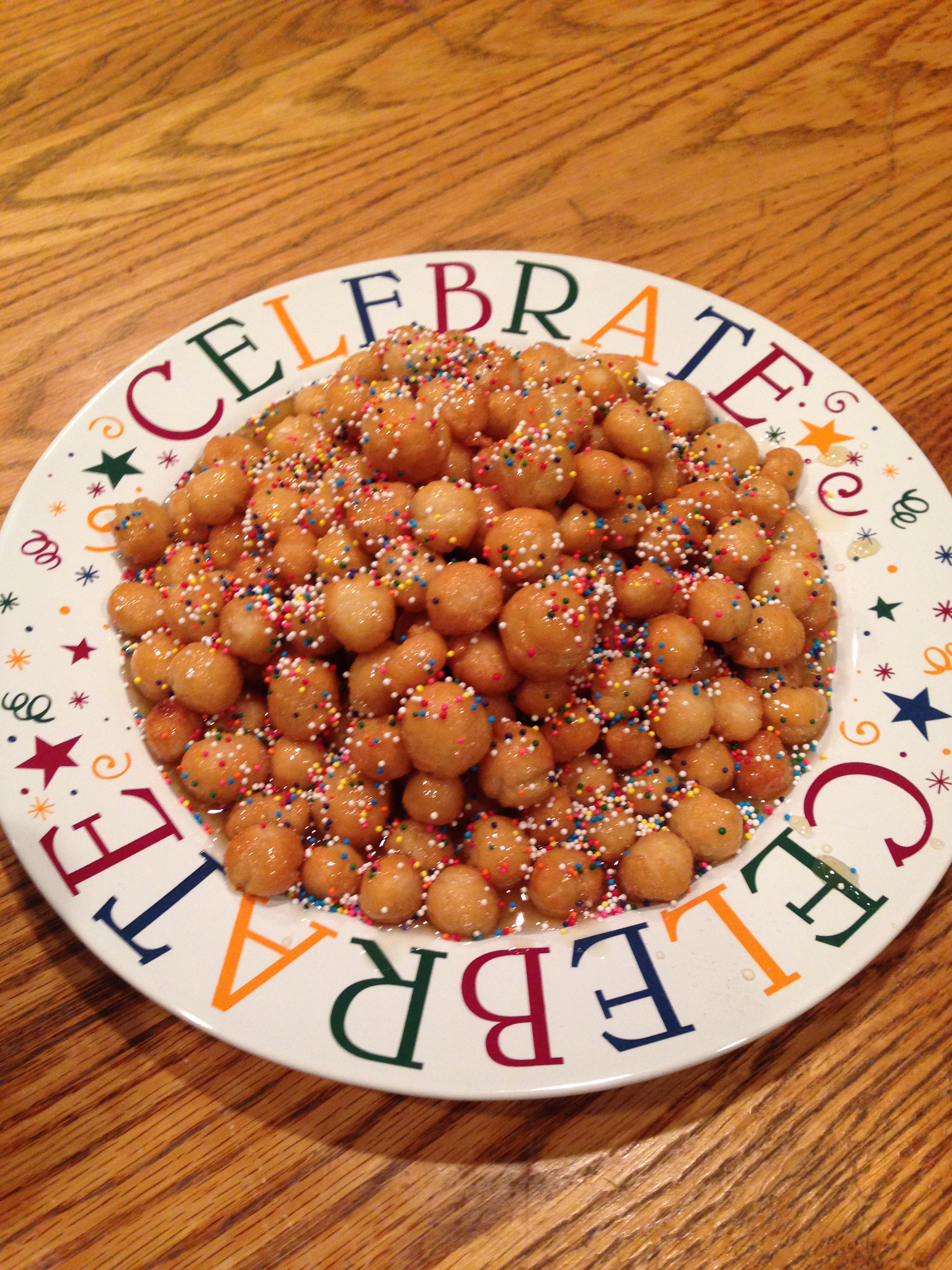 And my fridge is once again bursting with leftovers. Oh well, maybe next year we actually will scale back and order pizza or something. (Nah…hubby would cry and nobody likes a sad Santa.)