Skip to content
The Bad Mommy Cooks the USA
By Badmommy August 5, 2018April 17, 2019
FYI...my posts may contain affiliate links. This means that if you click on those links and make a purchase, I will receive a small commission at no cost to you. And those commissions are what makes it possible for me to blog. Thank you!

It’s summer break and we’ve been a bit lax on the State Tour de Foods lately. The reasons vary, but it’s mainly because we haven’t been on our normal school year routine (see Am I Running a Diner Here?). We did have our Minnesota meal a few weeks ago, but I haven’t had a chance to actually write about it until now.

Minnesota, for all you geography challenged out there, is one of those “up there” states. By “up there”, I mean near Canada. And cold. Like Wisconsin, North Dakota, and Montana. I can’t even fathom living where the temperature doesn’t usually crawl above the freezing mark until the beginning of April. I’m a warm weather Jersey girl myself—I look forward to beach days in the spring and not wearing a coat till Christmas. I’m not sure how I would fare in a foot of snow for Halloween.

So what is there to do when it’s so cold? Well, eat of course! And drink. There are a lot of bars in those cold states. Two in particular argue about who created the burger that we decided to make for our Minnesota state food.

Where Did It Come From?

The “Juicy Lucy Burgers” (or “Jucy Lucy” as Matt’s Bar has dubbed it) were without a doubt created in Minnesota. That’s not the controversy. What is controversial is WHERE these burgers were created. Both Matt’s Bar and 5-8 Club  in Minneapolis claim to have created this burger where the cheese is inside instead of on top. (These bars are a five minute drive from each other…unless you’re drunk…you should probably call an Uber. Or walk. You could definitely walk. Just wear lots of layers so you don’t get frostbite.)

According to Wikipedia, this burger is so renowned that it has been featured on Man vs. Food and former President Obama has even requested Juicy Lucy burgers from both bars. Yet, the controversy still remains on its origin, enough to create a rivalry among the townspeople (much like the controversy of who created the Hot Brown Sandwich).

What Keeps These Juicy Lucy Burgers Together????

When I first searched for recipes for this burger, I was a little dismayed to see that it didn’t seem to involve any spices. Or egg. Or bread crumbs. How was this burger going to stay together? How could it possibly taste good with only salt, pepper and Worcestershire sauce to flavor it? Hubby thinks I don’t put enough flavor in our foods already—he would lose his mind if I told him this didn’t have any spices to it.

Determined to discover a more “flavorful” version I searched a couple more recipes—they all were nearly identical. No spices. No breadcrumbs. I was starting to see whatever made this burger iconic would be a very bare bones recipe.

So I proceeded to make the Juicy Lucy burgers…sans onion, sans garlic, sans breadcrumbs, sans BBQ sauce… (Okay, I did use garlic pepper instead of just plain black pepper…shhhh!)

I seasoned the ground beef (the recipe called for 1 lb of ground beef to make 2 burgers—I tripled it so I would have 6 burgers—with the Worcestershire sauce, salt and (garlic) pepper, and formed them into 12 balls.

I flattened them into patties and made little wells in the bottom patties for the cheddar cheese to sit in:

Then I covered the bottom patty with the top patty, pinching the sides to ensure they stayed together and the cheese didn’t leak out. (A few of them still separated upon cooking, so you really need to make the seam…seamless.)

The result were giant hamburger patties. They took FOREVER to cook. Hubby made them in his cast iron skillet—it might have been faster to grill, but if they had fallen apart, it might have been messier. Still, the burgers came out nice and juicy-looking:

Because I was skeptical about the Juicy Lucy’s taste, I wanted to ensure our meal would have something tried and true. I made air fried potato chips with olive oil, salt, pepper, and garlic as well: 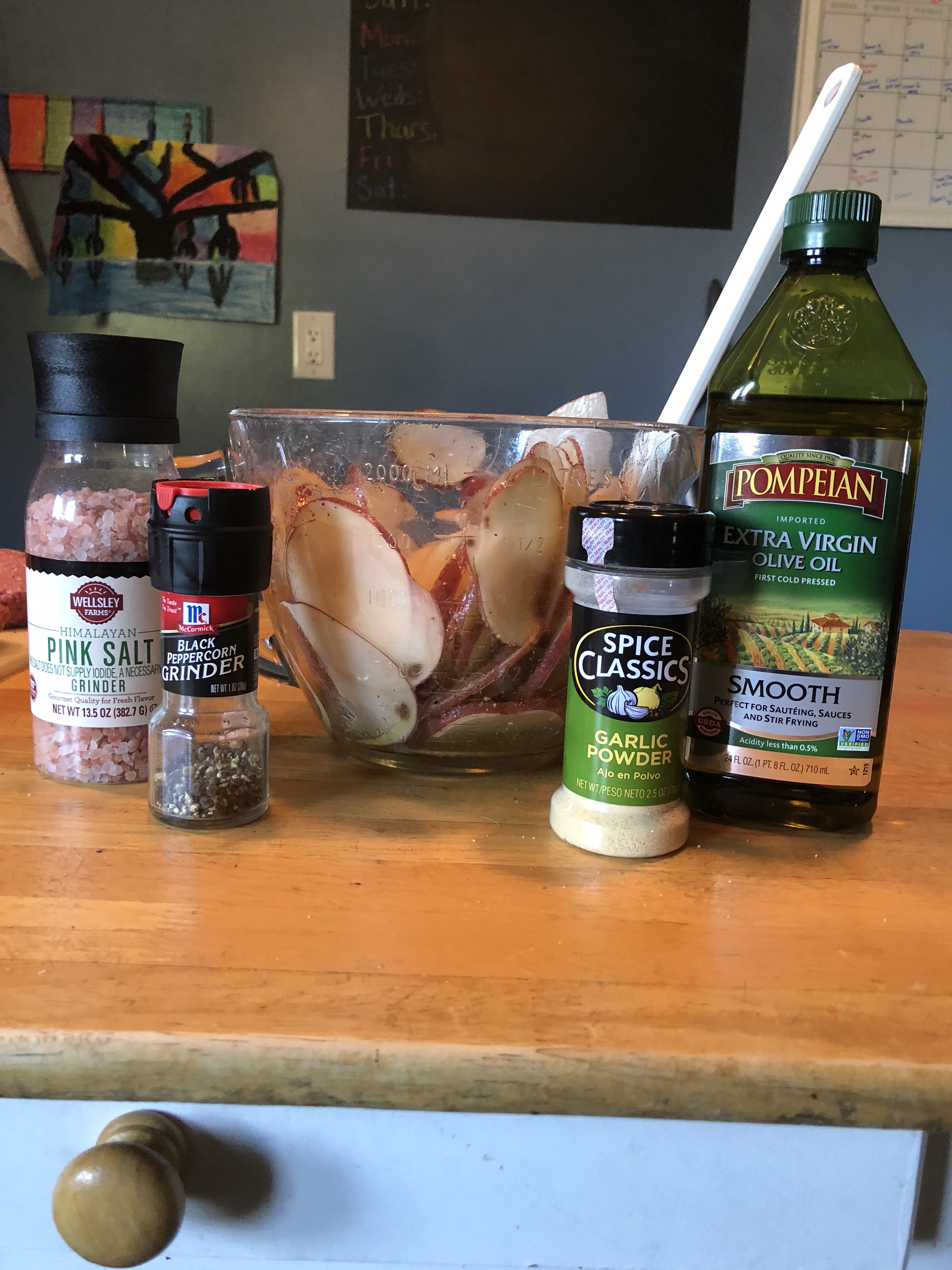 Throw in some coleslaw, you’ve got a meal. Believe me…you want to try these Juicy Lucy Burgers. Pin It Now

Surprisingly, the burgers were delicious and DEFINITELY juicy. The cheese can be very hot, so be careful. It didn’t even need more than a squirt of ketchup for flavor, either.

We will certainly add The Juicy Lucy to our meal rotation in the future. We might experiment with other cheeses, and will make the burgers smaller for sure to cut down on cooking time.

Try one yourself—I doubt you’ll be disappointed! (Nor will you care which bar created them!)