Skip to content
Parenting Humor
By January 24, 2014April 1, 2019
FYI...my posts may contain affiliate links. This means that if you click on those links and make a purchase, I will receive a small commission at no cost to you. And those commissions are what makes it possible for me to blog. Thank you!

I’m looking around the house and it’s making me sad. I’m convinced I’m never going to have nice things. Oh sure, I can afford to go out and get nice things but that doesn’t seem to matter. Because once the things come into my house, they’re never nice again.

The kids are almost 9 and 13 and I have finally gotten to the point where I buy something, I show it to them with the caveat, please do not touch, break, destroy, etc. etc. and I have about a 50% chance that they will honor this request. I feel that percentage is likely to go up in the next few years (besides,of course, anything pertaining to the car).

But it is not the children who are responsible for the majority of the destruction in our humble abode any longer. It is in fact, a furry, four legged resident that is slowly reducing my home to rubble.

Ever since we got married (17 loooooong years ago) we had cats. In fact, we STILL have one of those cats. Cats are notorious for clawing your crap. We discovered this the hard way by coming home one evening to find two of our cats hanging from the curtains like it was an amusement park ride.

Yeah, yeah, yeah…please don’t give me the bleeding heart inhumane speech. I’ve heard it. What the cats did to my curtains was inhumane. Besides the fact all of our cats have been indoor ones and they have no need for claws.

Cats also spew bodily fluids on places bodily fluids should not be. They pee on carpets when they are upset about something and hack up hair balls in your slippers (yes, I have slid my foot into a hairball lined slipper in the middle of the night). We had one cat who had explosive diarrhea and would completely miss the litter box 90% of the time.

Yet, for all their faults, cats cannot even BEGIN to scratch the surface on destruction like our newest addition to our family.

Colt is a 3 year old German Shepherd. In those three years, he has wrecked more havoc on our home than all our cats, our other dog and every child who has ever visited our house, combined. In fact, he probably broke that record in his first six months of life.

Colt is not an aggressive or vicious dog. He is a VERY happy dog. But he is also a BIG boy. He is almost 100 pounds and greets you with HIS ENTIRE BODY. He lumbers towards you full force, tail wagging, thrilled to death to see you. He loves you…he doesn’t care if he just met you, he can smell that he loves you from across the room.

He will land on you and it doesn’t matter if you are a 400 pound body builder with the balance of a yoga instructor. He will flatten you. And then he will sniff your orifices with sheer olfactory delight. All of them.

When we first got him, he was very timid, scared to go up and down steps and scrawny and malnourished. He never chewed a thing and was on his best behavior…other than peeing and crapping 87 times a day in the kitchen.

I remember being on my hands and knees scrubbing the grout in the floor with bleach at dawn…crying,”WHY have I done this to myself?” I cursed my moment of weakness when the children and the hubby batted their eyelashes at me and SWORE they would take care of him. For the record, apart from occasionally letting him outside, none of them have honored that promise. But it doesn’t matter, Colt only wants mommy to take care of him anyway. *sigh*

Colt is very needy. He’s whiny like a toddler and follows me around (nose literally up my a$$) like a hemorrhoid all day long. He scratches at the door and cries if I try to change my clothes alone in the bedroom and he waits for me at the bathroom door. He will bark at me and nudge persistently if I try to sit down on the couch and relax. No mommy, no break for you, chase me around the kitchen table!

He lays ON me at night only to wake me up at 3 am to chase neighbor cats around our backyard. ( He’s very insistent about this…standing next to me and woofing quietly to wake me. He wouldn’t DREAM of waking up Daddy).
But I can put up with that. It’s the destruction I can’t take.

We had a tiny hole in the couch cushion, about the size of the point to a toy sword (hmmmm, suspicious). One day, I was getting dressed for work and I came downstairs to discover that tiny hole became a hole big enough to fit a person in. And, what’s more, the other two cushions were also people sized holes. The puppy, thrilled with the new toy he had created of cushion stuffing leapt around the living room, tossing that stuffing in the air. He had EATEN THE COUCH. We found the pooped out foam around the backyard for weeks.

Okay, okay, we learned our lesson, right? Nope. A few weeks later, on a beautiful 60 degree spring day, we left him outside with the other dog for an hour or so. He barked. He whined. He begged to come in. There was no reason for it, so we ignored him. Stupid us. I poked my head out the window sometime later and saw him trotting around the yard with what looked like a piece of siding. Yup…he ate the siding off the house.

He has chewed more shoes and boots than I care to think about and he has also munched his way through three or four comforters, countless stuffed animals and pillow. He has helped himself to a variety of garbage can cuisine including entire chicken carcasses and empty peanut butter jars.

He has LITERALLY eaten my daughter’s homework on more than one occasion. He ate my husband’s brand new Cowboys hat that he never even wore once. Yesterday, my husband caught him with my eyeglasses. There is no rhyme or reason to his madness. He could ignore a pair of socks laying right next to him on the floor to go and take a library book off the kitchen table to snack on.

He’s lying on my new couch right now, smashing in the top cushion. It’s ruined. It’s never going back to the way it was. The sun is streaming in the window and I can clearly see his nose art all over the front window that I JUST cleaned. I just discovered a pair of my underwear that he took out of my hamper, all chewed up in a ball.

He’s three and it’s not getting better. Everyone keeps telling me, “they grow out of it”. But I’ve resigned the fact that I have a perpetual toddler on my hands and…I’m never going to have anything nice again. 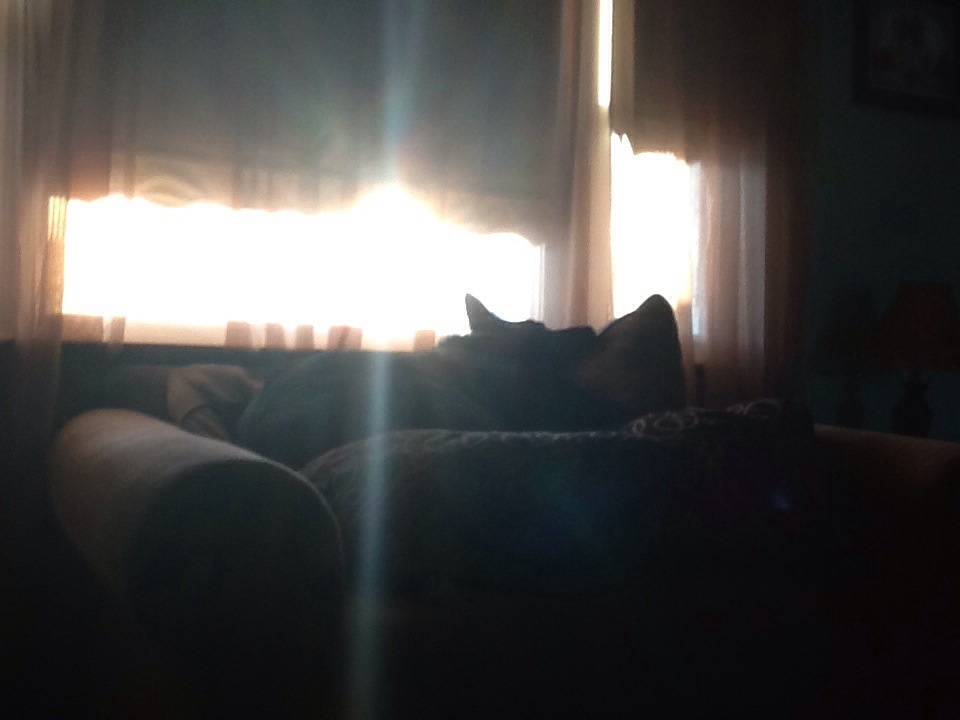