Skip to content
The Bad Mommy Cooks the USA
By Badmommy February 18, 2018April 18, 2019
FYI...my posts may contain affiliate links. This means that if you click on those links and make a purchase, I will receive a small commission at no cost to you. And those commissions are what makes it possible for me to blog. Thank you!

This week’s pick was Wyoming. From my research I discovered that Wyomingians (Wyomingites?) love wild game. It seems a lot of the Western/Northern states do—this isn’t the first time bison or elk has been suggested as our state food. Which I’m sure is because it is in abundance in those states. New Jersey? Not so much.

Hence the dilemma we found ourselves in last weekend after pulling Wyoming out of the hat (confession…it’s not actually a hat…it’s an e.l.f. make-up bag). Sure we’d like to try elk, but where were we going to get it from?

I scoured the internet for companies that sold elk steak and I found a couple of places (one from Jackson Hole, Wyoming in fact). The problem was, the elk steaks were not only crazy expensive ($80 on one site!), the shipping costs were astronomical. One company wouldn’t even ship the order unless you ordered at least $50 worth of products. Not that we wouldn’t normally eat $50 worth of steak…but we had no idea if we were even going to like the elk—we didn’t want to get too much of it and it went to waste, you know?

I found one place that the steaks were a decent price…$25 for 4 minuscule pieces, but the shipping costs were more than twice that! I almost gave up at that point until I noticed that place was in New Jersey. Further research revealed that it had a retail store that was only about an hour away in Boonton.

It was a rainy, miserable afternoon. I had just spent most of the day cleaning and all I wanted to do was take a nap. But the place closed in an hour and a half and wouldn’t be open the next day. It was now or never. I sucked it up and we took a ride. An hour there. An hour back. In a torrential downpour. Risking life and limb. To get elk.

The whole time we were driving there, I was a little nervous about the elk, to be honest with you. I was nervous about the bison, too, when we had it. I don’t know why. In my head, I can eat beef, chicken and pork. Even though most of the other meats resemble and taste like beef, chicken, or pork, I still expect them to taste completely foreign to me. Trying something new is difficult. I probably would be okay with eating an “exotic” meat if I didn’t know it wasn’t beef, chicken, or pork to begin with.

FYI, if you’re in the New Jersey area and you’re looking for “exotic meats”, this place (Fossil Farms) has a ton of crazy things for a small store, elk, bison, kangaroo, camel, to name a few. And in various forms as well: steaks, jerkys, burgers…

They also have a selection of healthy pet foods and since our dog is currently on a raw diet for his skin allergies, I picked up some elk meat for him too (much to hubby’s dismay—he’s convinced the dog eats better than he does…totally not true). 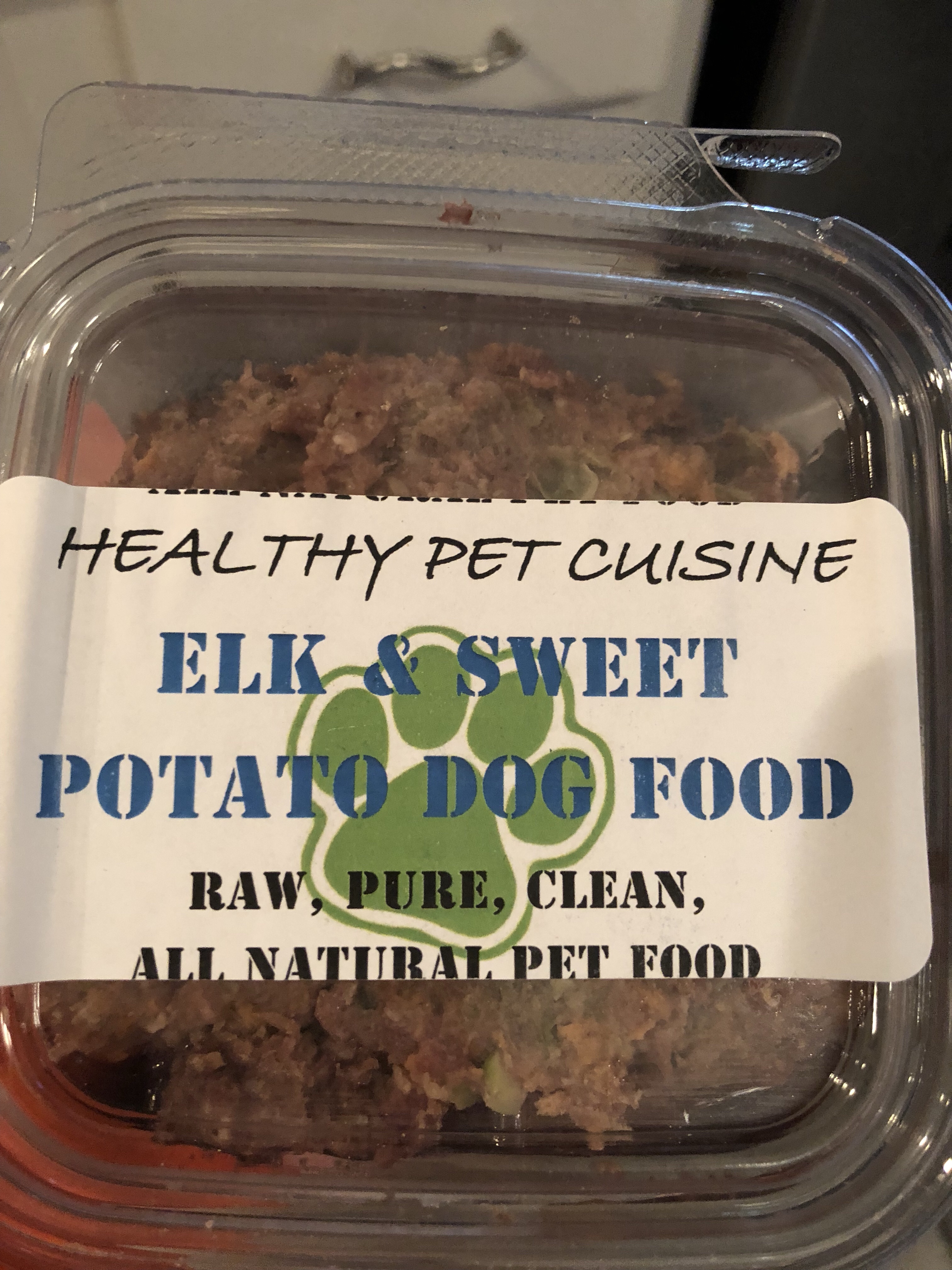 The dog loved his elk, by the way. Still, not enough to convince me that I would love the elk. The dog has been known to eat his own regurgitated meals, you know?

So, Hubby made the elk last night. Why are you surprised? Did you think I was going to cook it at $25 a pound???? No way he was going to let me have the chance to completely wreck this meal. These are the pre-cooked steaks (with my hand as a comparison): 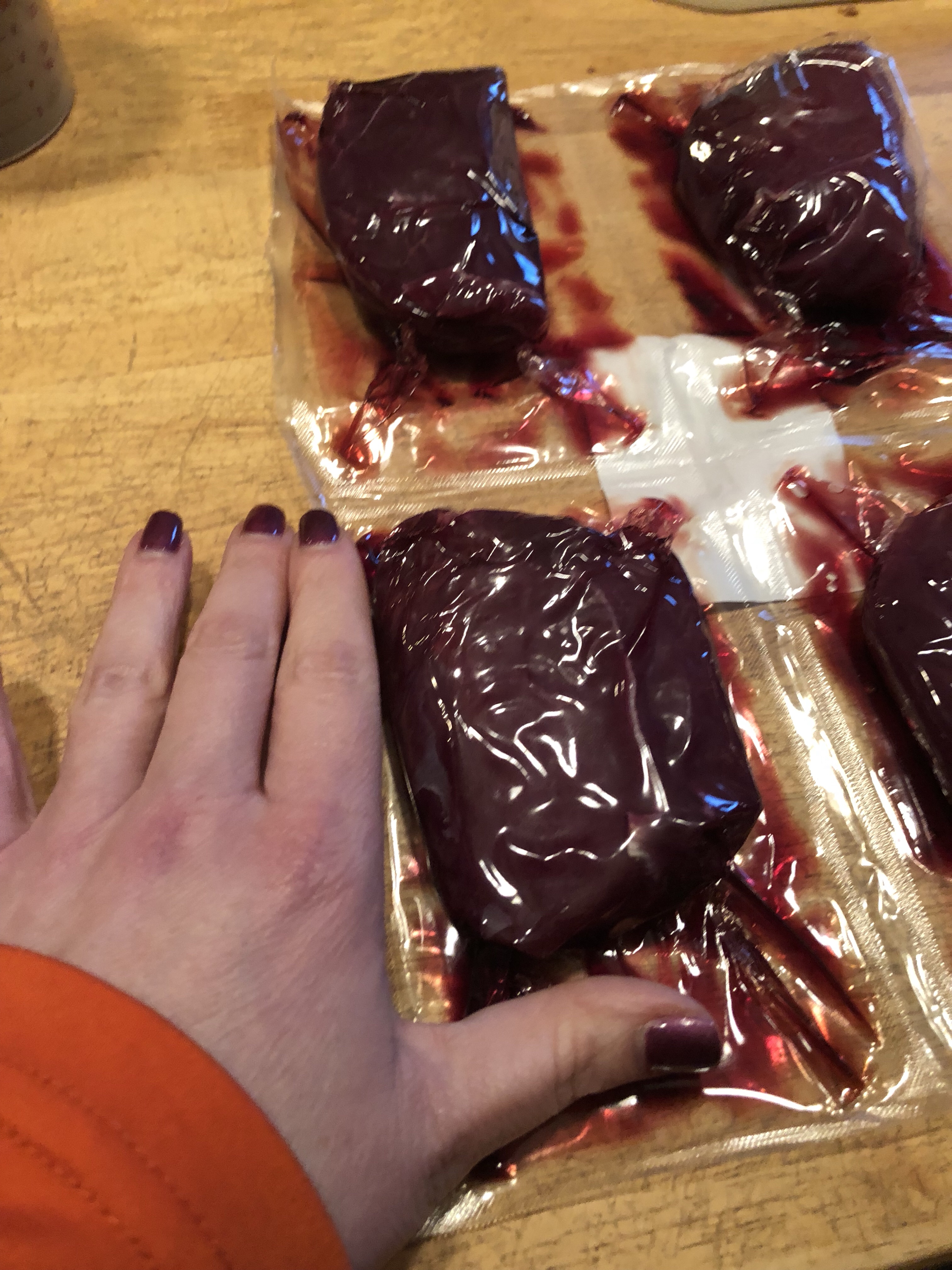 This meal needed to be treated with care. It would be very easy to ruin it and then we would have no elk and we’d have to drive two hours for more. Hubby found some hoity-toity, fancy-schmancy elk medallion with blackberry port reduction recipe. He also sauteed Brussel sprouts and made garlic-rosemary oven-roasted potatoes. Here he is, hard at work:

There really isn’t much to say about the cooking process. Nothing got burnt or undercooked. No smoke alarms went off and no curtains were lit on fire. I know you’re disappointed, but that’s what happens when hubby cooks.

It was very good—especially his blackberry sauce. The meat did taste a lot like London broil (while in the back of my head I knew it wasn’t London broil and was kind of wishing that it was London broil so I could enjoy the damn meat without thinking I was eating something weird). It wasn’t chewy or gamey like I expected at all. It did have a little bit of a odd flavor to it, but I can’t put my finger on what it was (maybe it was the blackberry port wine reduction—maybe elk isn’t that fancy and shouldn’t have such hoity toity sauces on the side).

Would we try elk again? Maybe. Probably. But only after I get a hunk of cow steak and mix it in so I don’t know which is which.

One thought on “Wyoming Elk Steaks”