Skip to content
The Bad Mommy Cooks the USA
By Badmommy December 13, 2017April 18, 2019
FYI...my posts may contain affiliate links. This means that if you click on those links and make a purchase, I will receive a small commission at no cost to you. And those commissions are what makes it possible for me to blog. Thank you!

Hallelujah, I’ve redeemed myself after my Boston Cream massacre. Arizona was the state we pulled from the hat this week—I should be able to cook a decent meal from Arizona. After all, I lived there for three months.

Yes, you read that correctly. Back in ’99, we wanted to try something different before we settled down and bought a house. Travel nursing beckoned me. In theory, it was a fabulous way to see the country and get paid to do it. I would be able to beef up my resume and get experience as a nurse at the same time.

In theory it was a great idea. In reality, it led us to Arizona. In June. July. And August. Otherwise known as THE SURFACE OF THE FREAKING SUN. I thought nothing could be worse than growing up in the humid swamp of New Jersey in the middle of the summer. After all, Arizona is a dry heat. Ha! If I had a dollar for every time I heard that.

Let me tell you something…heat is heat. When it’s literally 120 degrees and you can fry an egg on the sidewalk (we actually watched them do this in downtown Oatman), it doesn’t matter a fart if it’s a dry heat—you’re dying either way.

Seriously, we had to bring a cooler to go to the grocery store or our ice cream would melt (IN THE AIR CONDITIONED CAR!!!) on the way home.

The place we lived, Bullhead City, was virtually unheard of and barely inhabited at the time. 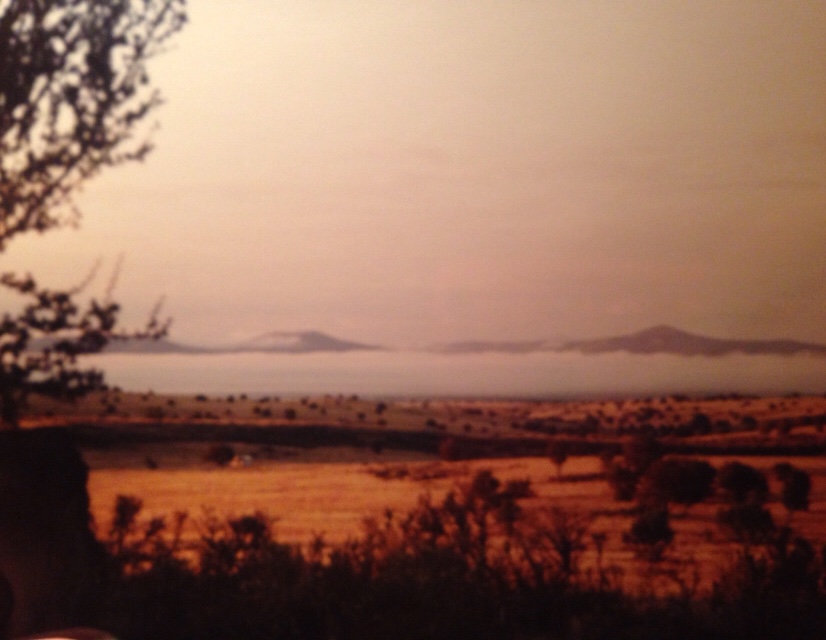 This was actually the view from our bedroom window. That grocery store we had to drive to? Yeah, that was 17 minutes away. There wasn’t much around except lizards and tumbleweeds.

When you come from a built up area like we do, that’s a bitter pill to swallow. Within a week, we had already gone to the lake and the river and were bored and homesick.

Not only were restaurants for us to frequent in short supply (except McDonald’s), we were dirt poor and couldn’t have afforded to eat in a restaurant anyway. So we cooked a lot out there.

Obviously with its close proximity to Mexico, Mexican food is pretty popular in Arizona. Maybe this is why when I cook Mexican/ TexMex food, I do pretty well. I must have absorbed Mexican cooking knowledge as I slept so close to the border or something.

However, I had never made chimichangas, a classic Mexican dish. I decided to attempt it after the disastrous Massachusetts dessert last week. To make it even more authentic, I had hubby whip up his world-famous guacamole. Ok, maybe I was craving it and I claimed it was necessary for the meal. Hey, he fell for it. 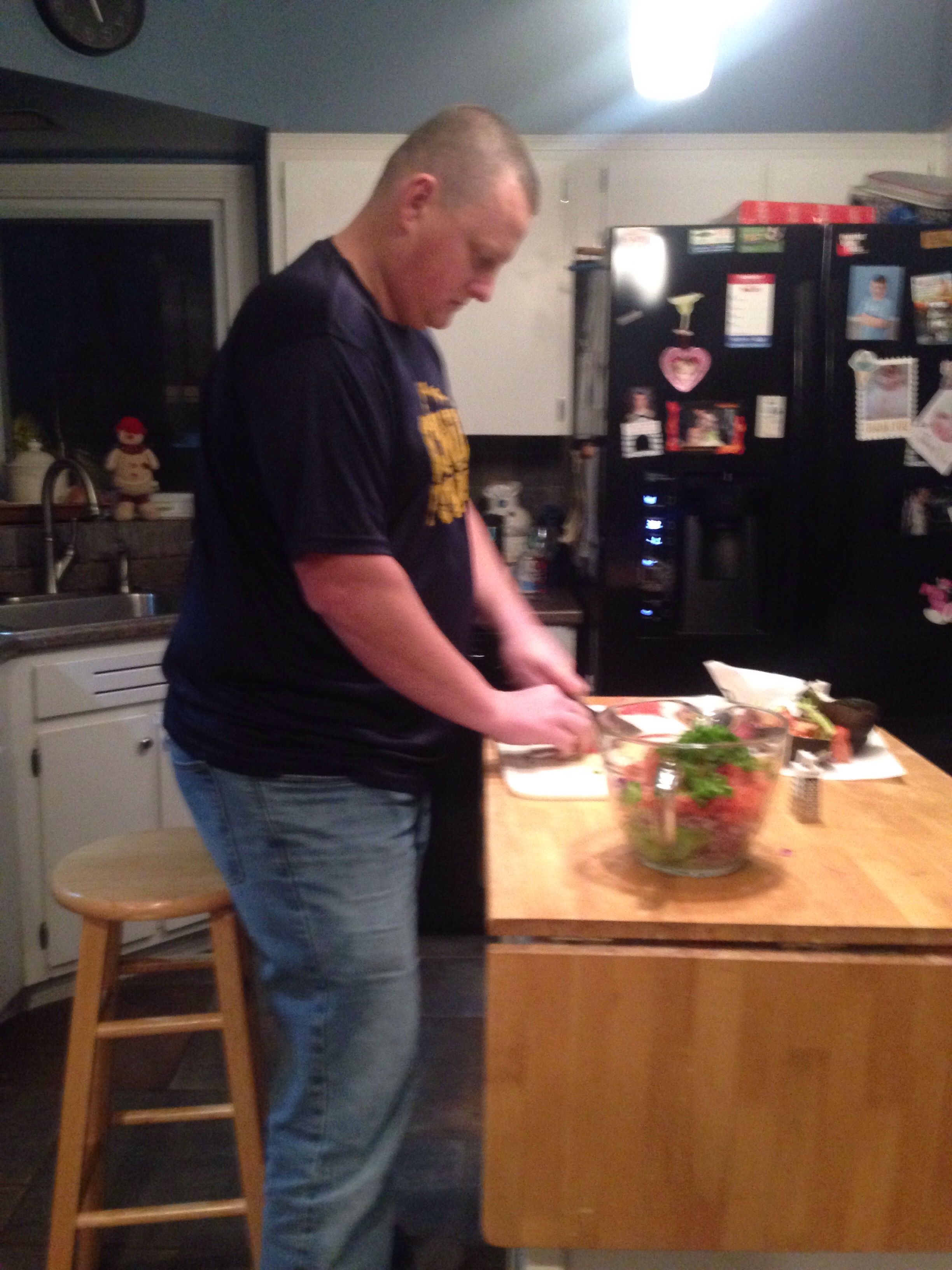 The chimichangas weren’t too complicated either. We decided on beef, but you can make pork or chicken as well. First you brown the beef and add minced onions: 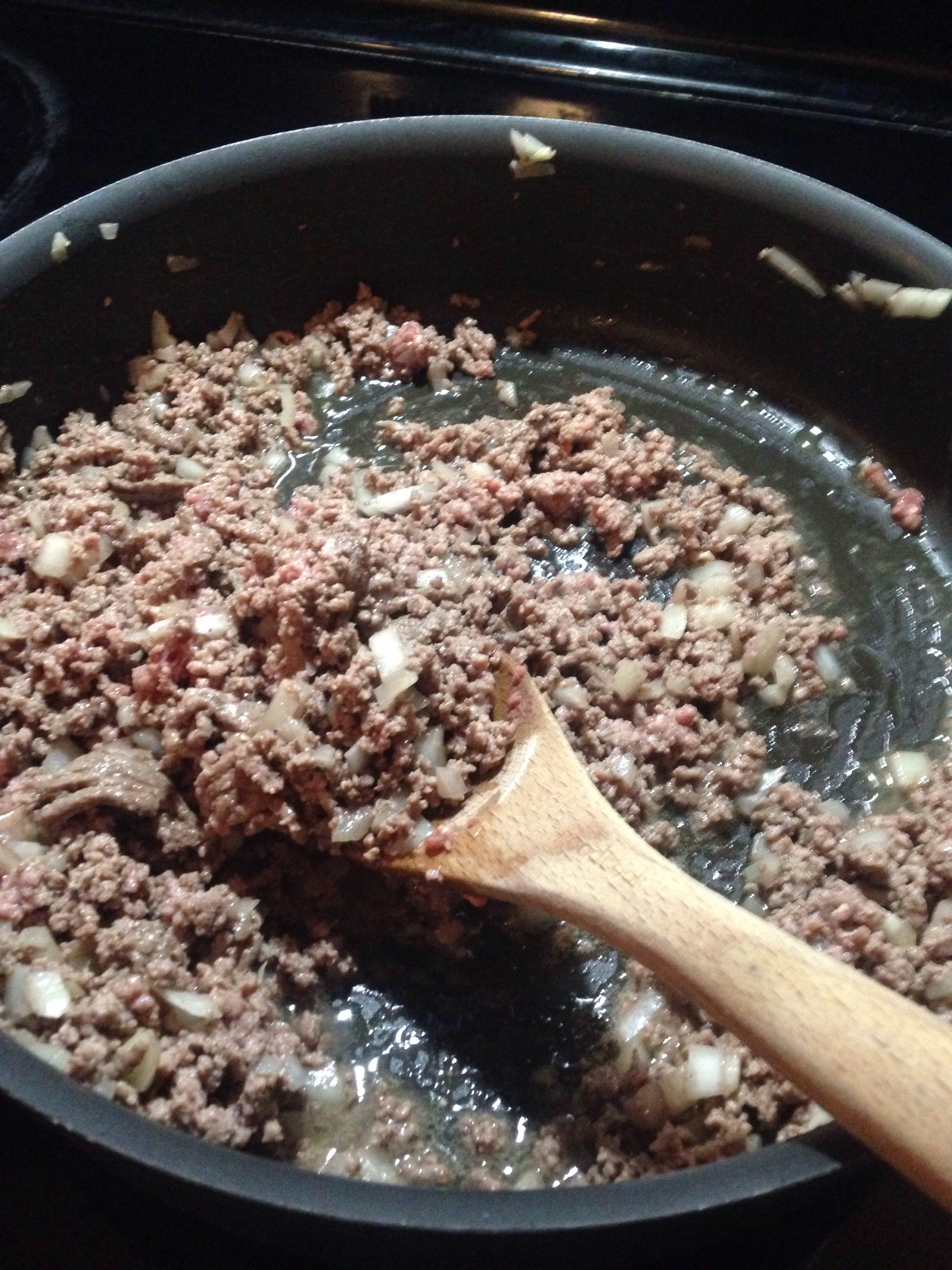 Then you add the spices (oregano, cumin, chili powder) and garlic. I was nervous that it wouldn’t have much flavor because hubby used up the last garlic clove making the guac (which is now repeating on me as I type this), so I put extra chili powder and added garlic powder.

A LOT of garlic powder. I tasted it and it still was kind of blah, so I added a lot more chili powder.

Then I proceeded to get a clump of the chili powder in my mouth as I tasted the beef. Yikes.

Then you add tomato sauce and refried bean. I wanted to add the beans, but I was outnumbered. If you make this and use refried beans, send me some so I can taste it the way it was meant to be tasted.

Next you roll the beef into the tortillas and toothpick them in place. (Be sure to remove said toothpicks from the tortilla after it’s fried…it hurts the roof of your mouth big time when you bite into that.) 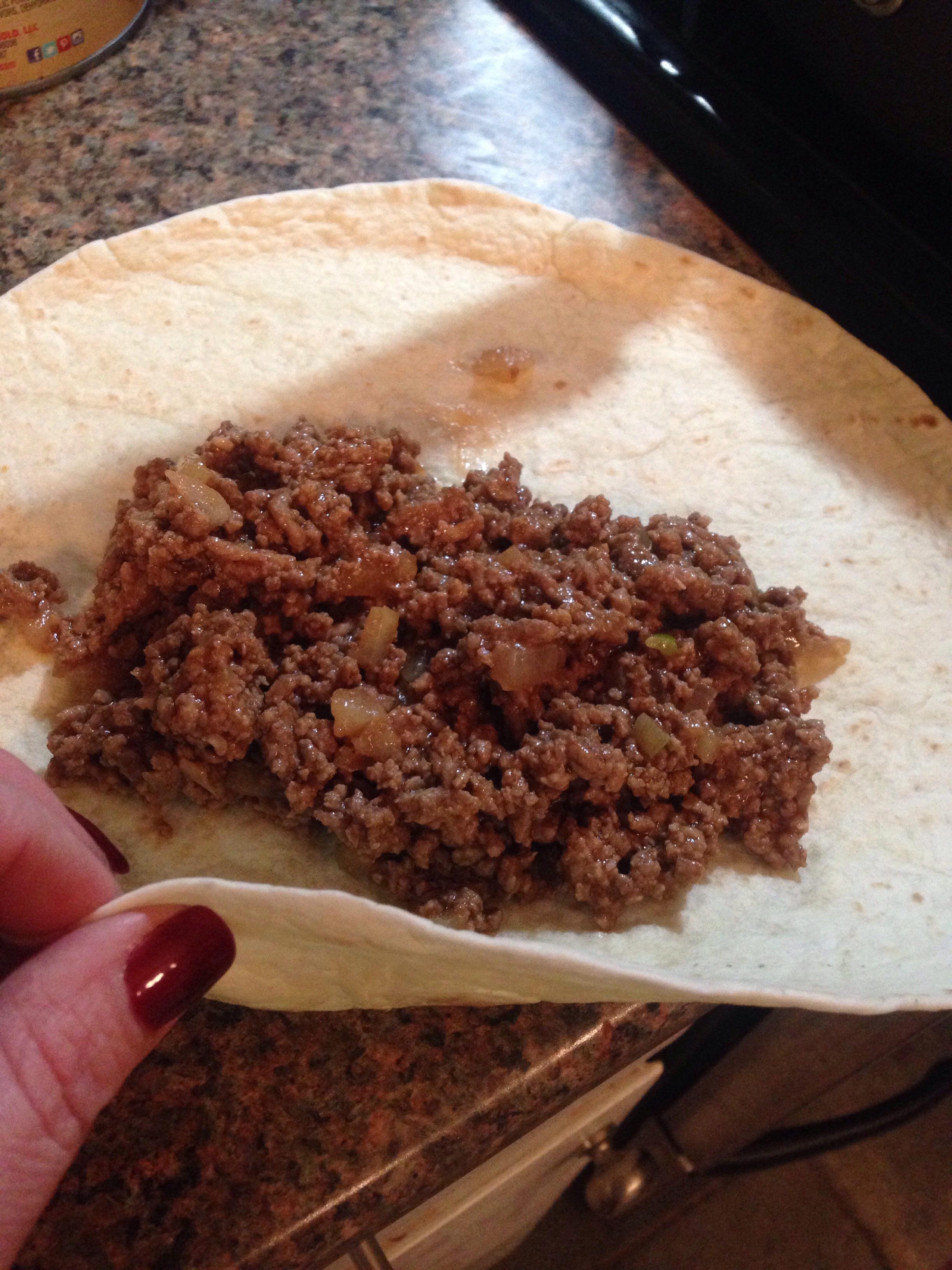 You can fry on the stove, but we have a deep fryer, so we used that. (What’s one more mess to clean up???) 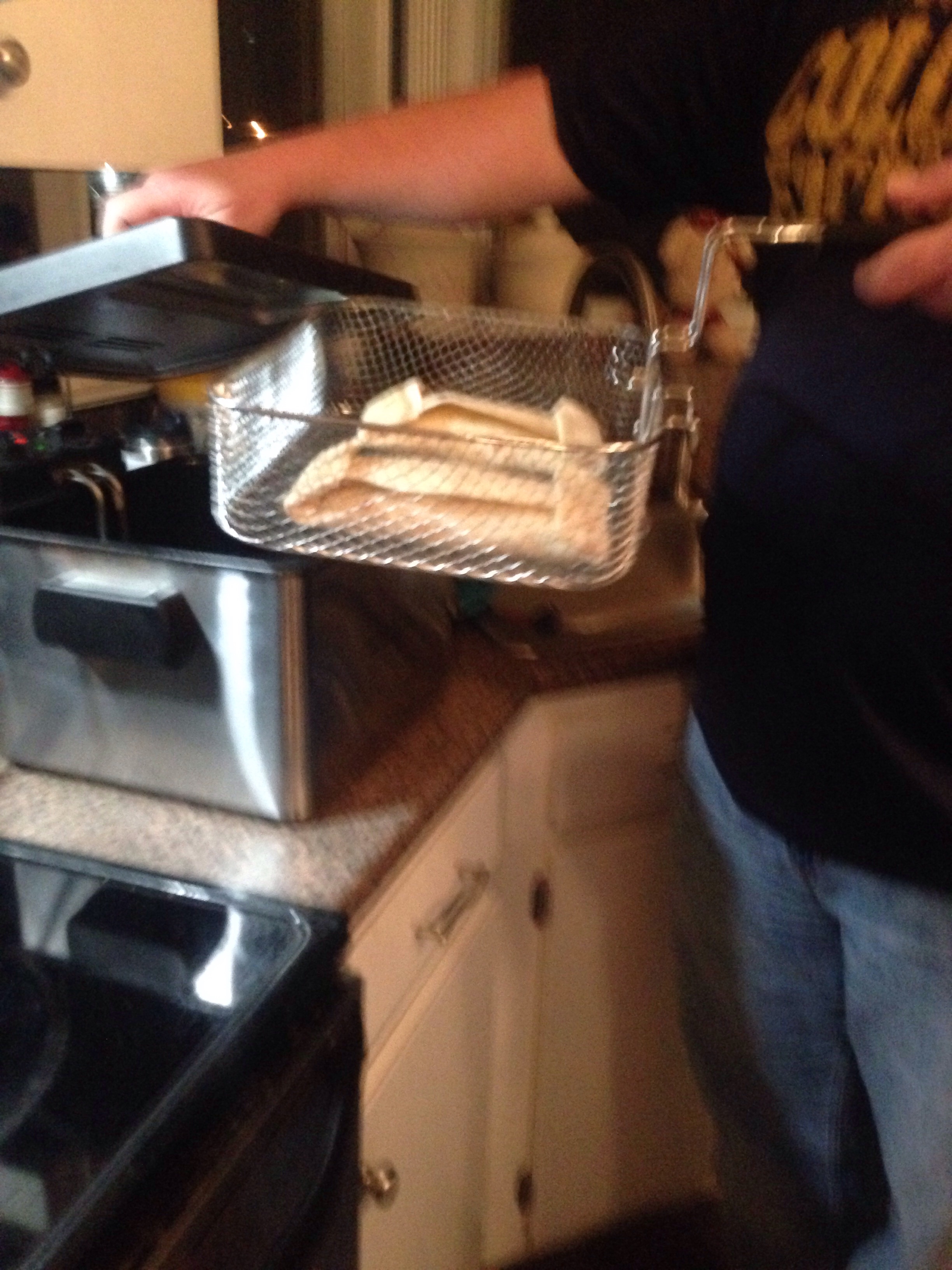 While that fried up, I made the sauce to go on top—tomato sauce with jalepenos and diced green chiles. Hubby diced everything since he’s much faster at it than I am and doesn’t cut himself like I do.

When the rolled up tortillas come out of the fryer, top them with shredded Monterey jack/cheddar, the sauce, shredded lettuce and a dollop of cream cheese. 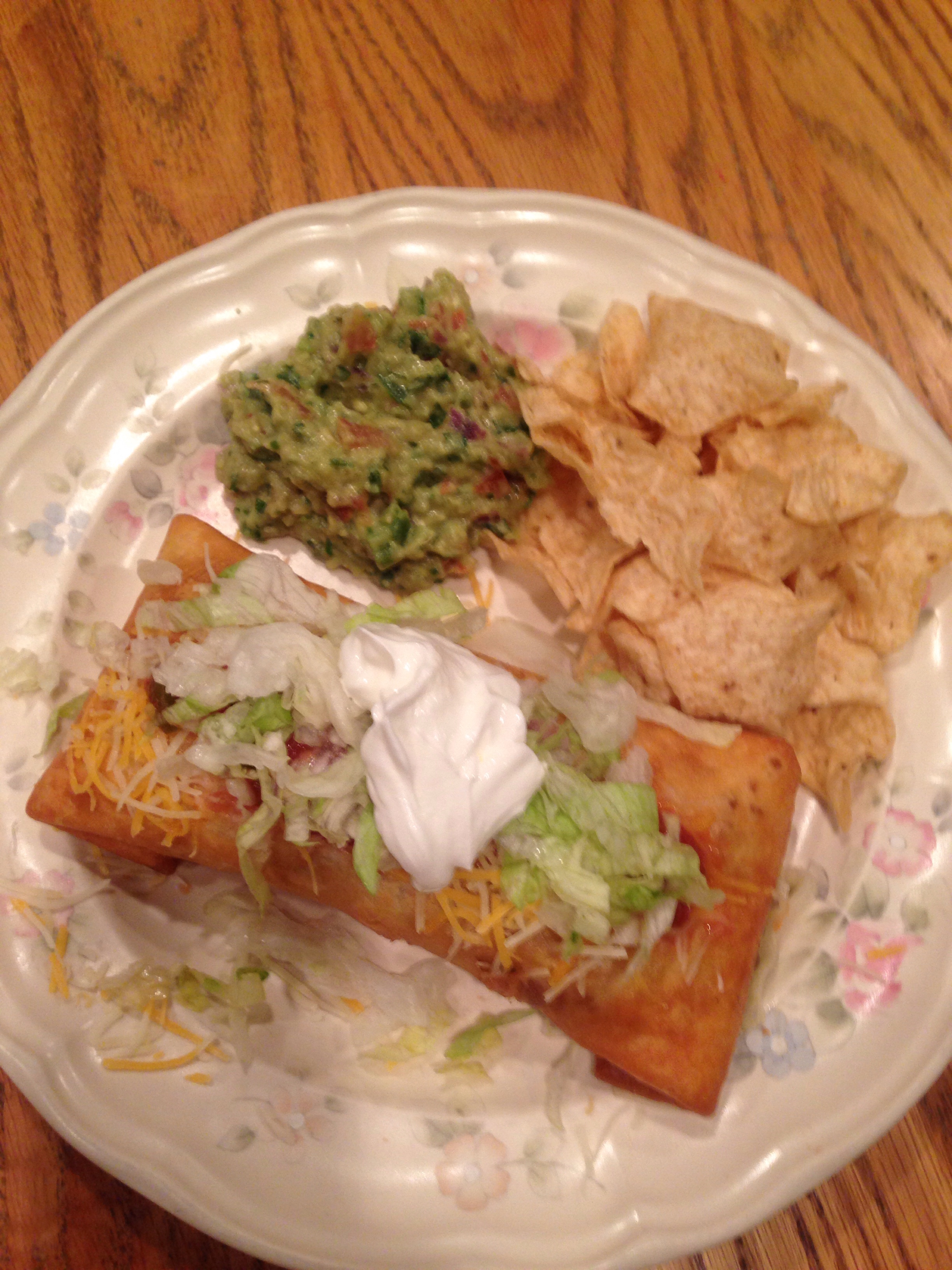 Here’s an inside view: 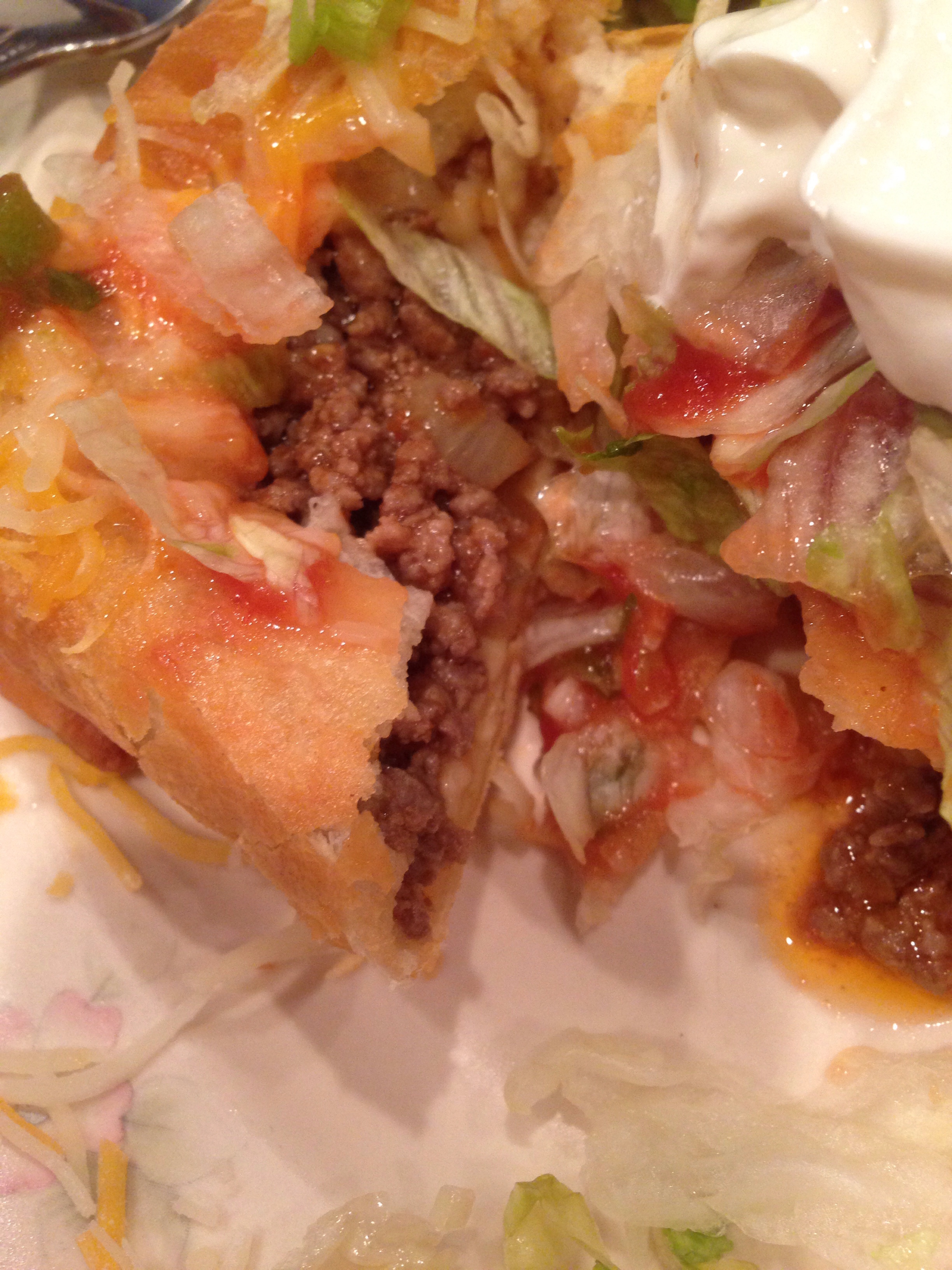 They were really filling—we could only eat one apiece so we had two left over. I’m not sure that they’ll warm up well though. At any rate, the meal got three thumbs up (the fourth thumb is at work again) and I got the go ahead to make them again in the future!

Maybe I’ll try the pork next time—y’all know how I feel about pulled pork.