Skip to content
The Bad Mommy Cooks
By Badmommy July 30, 2017April 19, 2019
FYI...my posts may contain affiliate links. This means that if you click on those links and make a purchase, I will receive a small commission at no cost to you. And those commissions are what makes it possible for me to blog. Thank you!

As you all must know by know, I’m a crap cook. I once had to be taught how to make Ramen noddles by my eleven year old daughter (in my defense, I lived at home in college and never had to have a Ramen noddle/hotdog dinner).

But still, I keep trying. Mostly because we have to eat or we will die. We eat out a lot. I’ve gotten a lot of flak from friends and family for that. Not that they come over to help plan a meal and shop for a meal and clean up from a meal after it catches fire and the damn picky kids refuse to eat it…but I digress. It’s very difficult for me (as I’m sure it is for many of us) to execute a decent dinner without a hitch. So what to do?

I’ve become a Pinterest whore, pinning nearly every recipe that makes me drool and rarely making them. And when I do…well, you’ve seen “Pinterest fails”, haven’t you?

I’ve signed up for every meal delivery service known to man, hoping that somehow, someway, the boxes that come to the house will magically transform me into Chef Mommy (or include an actual chef to cook me dinner)

I’ve invested in an idiot proof crock pot that guarantees fantastic meals and still…I manage to mess it up. It’s depressing screwing up so much. I’ve lost the will to go on. Cooking wise, that is.

UNLESS…there’s a challenge involved. I do love challenges almost as much as I despise cooking. Whenever our family has faced a “food challenge”, we’ve overcome it…like the month I forbade us to eat out at restaurants (See The Great Cooking Experiment ).

Last week as I was scrolling through the endless emails that those meal delivery service companies still send me (gotta give them points for trying—they don’t realize I’m hopeless at cooking), my mouth began to water at the pictures of food. It was around lunchtime and that’s when I’m particularly vulnerable to food pictures and the notion that I can cook. It must have something to do with a drop in blood sugar.

Anyway…the menu was already there. One of the biggest challenges for me when planning meals is figuring out WHAT to cook (and who has practice and when will we be able to all sit down at the same time…), and with this menu, it was already figured out for me.

Along with that week’s menu was an article from a news outlet stating that this particular meal delivery service was “cheaper and easier than the grocery store”. I eyeballed those words and said “Challenge accepted”. Already it was Heather 1, Meal Plan Company (MPC) 0, how could I go wrong?

For some reason, the meal delivery service companies actually allow you to download the recipe and print it out…even if you don’t purchase food that week. Suckers. So I did just that and headed to the grocery store to purchase everything I needed.

Going to the grocery store was no big deal—even when we had the meals delivered, I still had to go to the grocery store for other meals. After all, we didn’t just eat three meals a week. Anyone who says it saved them from going to the store is either lying or doesn’t live with Walking Metabolism Man and Son. Heather 2, Meal Plan Company 0.

At the grocery store, I realized the pitfall to picking up your own ingredients was the fact that the meal plan company slips one IMPOSSIBLE TO FIND ingredient in each recipe. Like Chihuahua cheese. Which I am happy to report, does NOT come from actual Chihuahuas (long story…).

No matter, I’m up for the challenge. I have Google and I’m not afraid to use it. Almost every ingredient can be replaced with something similar. Not like my kids’ palates are so refined that they’re going to notice the difference between red chiles and jalapenos anyway.

And by going to the store I got to get MORE of the ingredients. Instead of the sliver of steak that the meal plan company sent last time (and the kids tried to stab each other with steak knives over it), I got three times as much. That’s now Heather 4, MPC 0. Yup…bonus points.

I got everything home and discovered that it was all just as stupid and confusing to cook as it was when they sent me the ingredients. I nearly set the stove on fire countless times and actually burnt the corn for one recipe.

Oh, but I did learn that we HAVE a broiler on the oven. My husband looked at me like I was mental. How was I supposed to know it was a broiler? We’ve only had that oven for twelve years.

While cooking, though, I realized that the only thing that MIGHT have been helpful was the pre-measured ingredients. That would have saved me some agonizing over how much milk I needed if I couldn’t actually find a measuring cup. And chopping stuff. I do hate chopping stuff. So now it was Heather 4, MPC 1.

The first recipe was a Mexican street corn flatbread. Hubby and I really liked it, although I did end up putting too much milk in it. The homemade guacamole (not included in MP) and sangria (DEFINITELY not included) certainly helped.

Kids balked at the sight of the flatbreads and each took bird-like bites and then threw themselves on the floor like I had fed them dog poop fresh from the backyard. Pretty sure they would have done that if the MPC delivered the food as well. So no score change on that one. 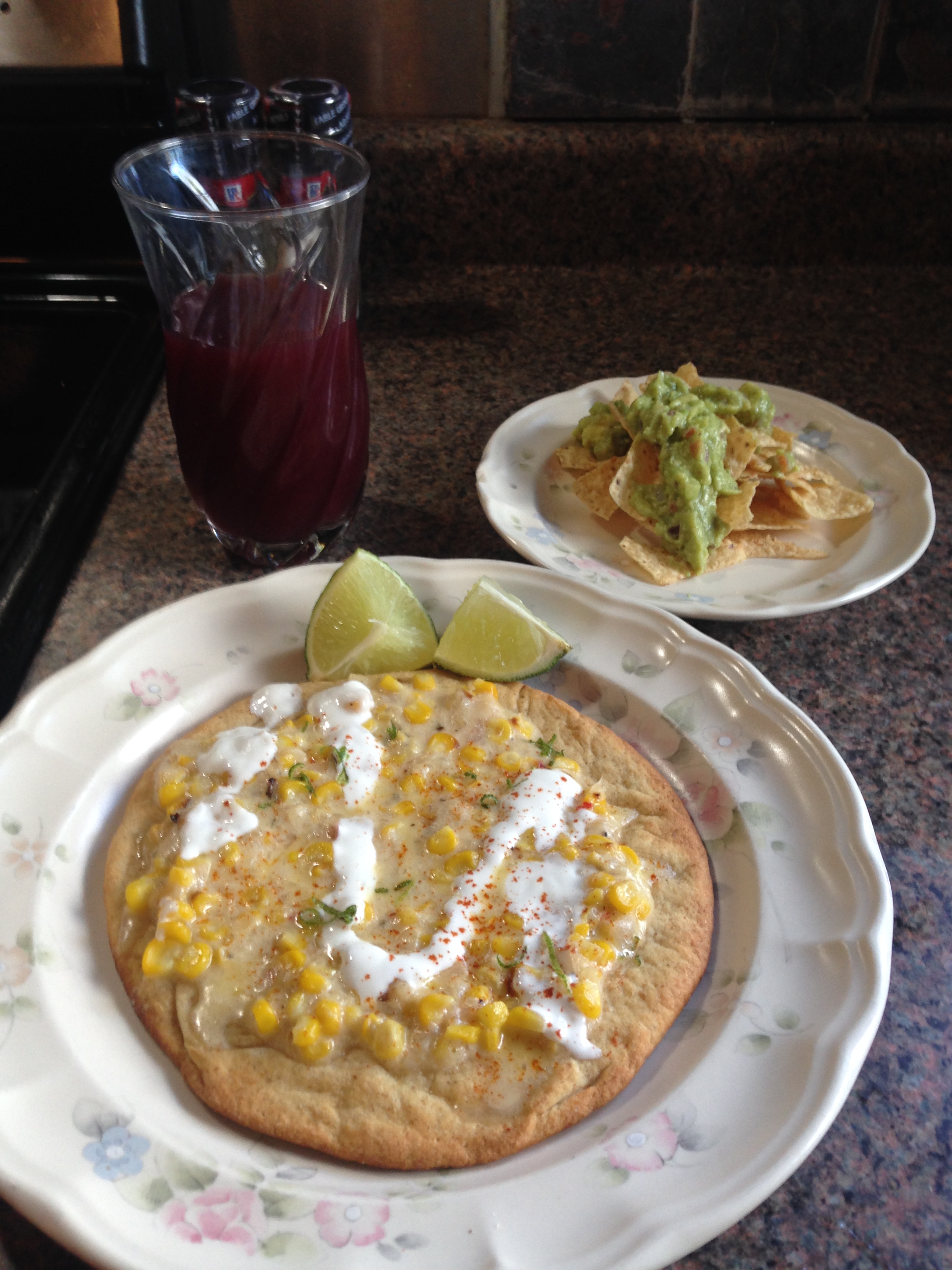 Meal two was even tougher. Steak with Robert sauce. It was essentially flank steak with sides of sautéed green beans and blue cheese mashed cauliflowers. Sounds fancy, but it was rated “easy”.  (I love how the recipe cards rate them all as “easy”. Easy for who? Gordon Ramsey???).

Hubby had to help or I really would have had to call the fire department since the recipe called for me to saute green beans and flank steak at the same time in separate pans. I can’t even reach for the salt and stir a pot at the same time. Here’s a pic of the finished product: 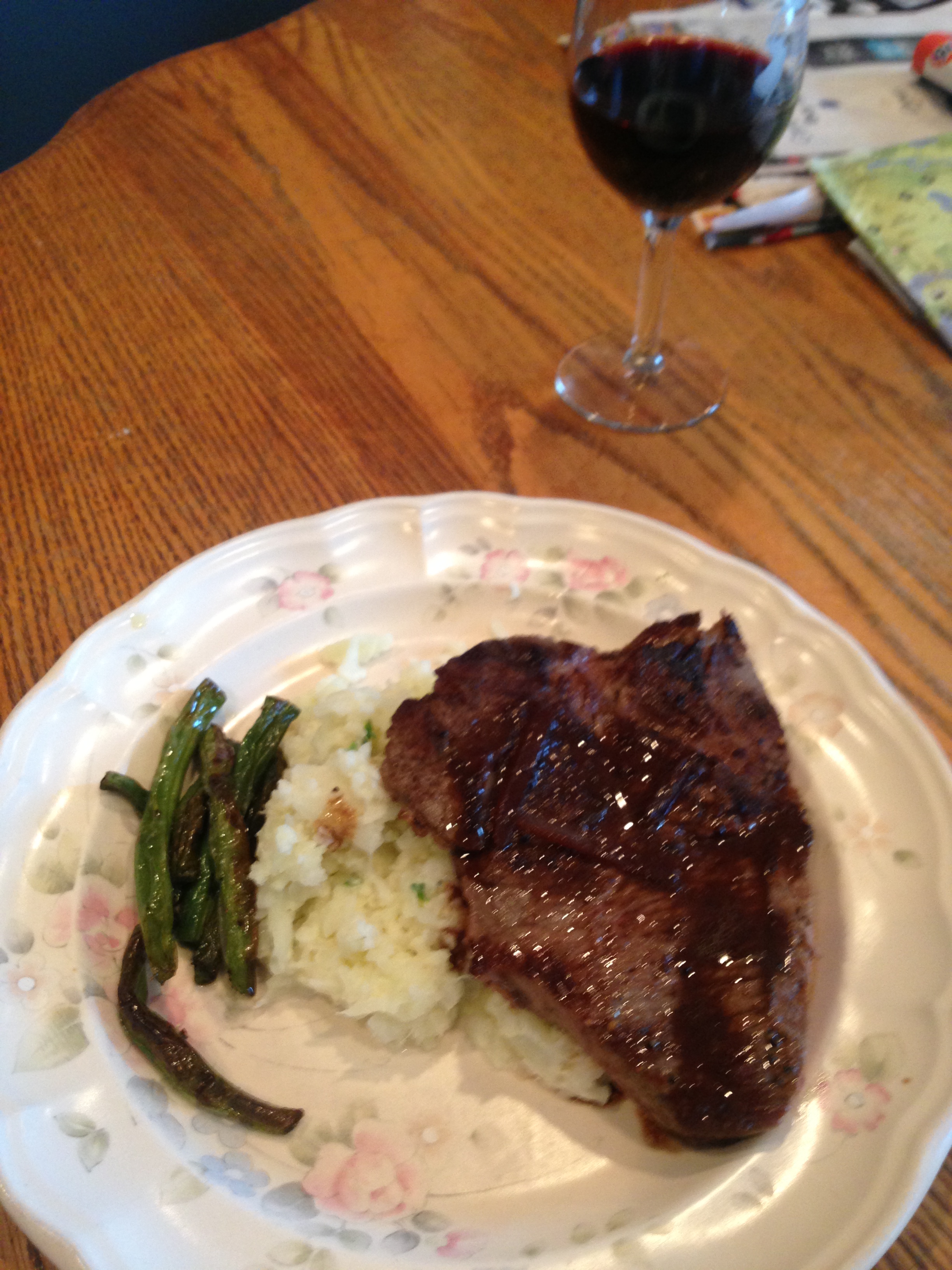 The steak was really good, but that was all hubby’s doing. Although I did pick some nice pieces. And everyone was definitely happier with portion sizes this time. All steak knives were used appropriately. The wine was delightful, but once again…not included in the meal plan company’s version.

The green beans were okay and the mashed cauliflower…well, that’s my third time attempting mashed cauliflower. Three strikes you’re out, right? At least the dog liked it. I’m giving myself a point for this one. Heather 5, MPC 1.

The last recipe was Carolina BBQ pork medallions. It had a coleslaw side, but nothing else. I love BBQ pork so I figured this would be a great one despite the lack of sustenance.

Well, it wasn’t. I forgot to season the pork before browning it. And I didn’t have the right “Dijon mustard dressing”. And my daughter ate all the peanuts for the coleslaw before I could make it. And I put too much of the jalepenos in the coleslaw. Oh and “ewwww why does this coleslaw have vinegar in it? I only like coleslaw with mayo in it.”

Yeah. Pretty much a disaster. I think we all had ice cream for dinner that night. At least it looked pretty. Heather 5, MPC 2. 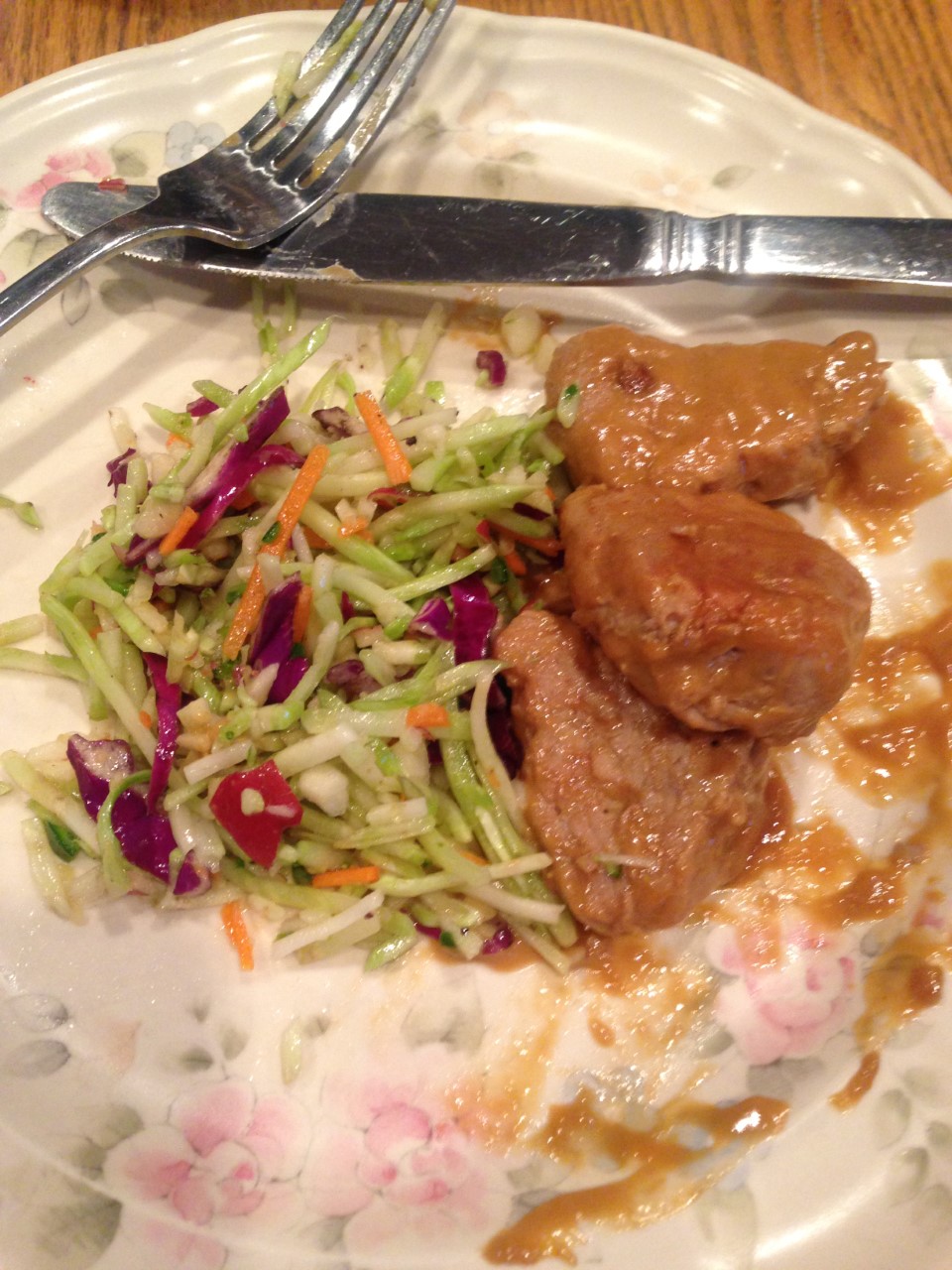 Total cost of all meals? About $47. (Not including wine and guacamole ingredients). It would have cost me $119 if I went with the meal plan company for almost the exact same meals.

Verdict? It’s NOT cheaper than the grocery store…not by a long shot. Especially not if you end up chucking one whole meal. Final score: Heather 6, MPC 2.

However, the meal plans aren’t without merit. It was good to go out of our comfort zone and try new things…things I wouldn’t have thought of on my own. Don’t take my word for it though. Check out one of the sites and try the challenge yourself.

One thought on “Meal Plan Challenge”