Skip to content
Parenting Humor
By Badmommy July 23, 2017April 19, 2019
FYI...my posts may contain affiliate links. This means that if you click on those links and make a purchase, I will receive a small commission at no cost to you. And those commissions are what makes it possible for me to blog. Thank you!

With the dawn of Social media, we’ve really gotten to know our neighbors. Well, maybe not completely since people pick and chose what they WANT us to know about them, but often, even as people try to curb their reality, we discover a lot about them. what I’ve discovered about many of my Facebook friends and acquaintances is that they’re Disney Freaks.

Now, I love Tinkerbell as much as the next girl. I’ve been to Disney World a few times. I even have a Tinkerbell hat. And a couple of mugs. But that’s where it ends for me. If Disney World goes belly up tomorrow, I’ll just shrug and wonder how it’ll affect the stock market (well, no, I probably won’t even wonder that).

But many people around me would be devastated. They would probably crawl into an underground Alice in Wonderland rabbit hole and die. With all the Disney craze around me, I couldn’t help but wonder if perhaps I wasn’t missing out on some vital piece of my existence, something that would complete me in the way only a margarita on the shores of Turks and Caicos has in the past.

So on a trip to the west coast, I decided to suck it up and visit Disneyland—mini Disney World for those who aren’t ready for the big time yet, those who haven’t immersed themselves completely in the Disney culture.

And indeed I did. I was wowed by the prices (over $300 for me and my daughter to spend six hours at the park and go on a grand total of THREE rides). I was dazzled by the heat and the fact that I felt like I was going to melt while waiting for aforementioned rides. And I didn’t have to wonder what hit me…it was anti-Disney mania at its finest.

I am confidently stating that I never need to go to Disney again.

Yes, Disney Freaks, you heard me correctly. I. Am. Not. Going. To. Disney. Again.

But Heather, you are saying, you can’t MEAN that! The reason you didn’t have a good experience is because you didn’t do Disney right! You went in the summer at the height of tourist season! You didn’t get your fast pass and you didn’t go at the right time and you didn’t plan your rides and attractions for maximum benefit. You can’t expect to have fun like that!

You’re right. I didn’t. You want to know why??? I went to Disney with three other adults and SEVEN children. That’s roughly two kids per adult. Oh, and did I mention that the kids ages ranged from 22 months to 13 years??? Yeah, let me know how you would maximize that experience, Disney Freak. You would need a lot of kiddie leashes.

We only had one leash and seven that needed to be on a leash. We had seven kids who were all hungry but couldn’t decide what they wanted to eat. We had seven kids whose reactions to the characters ranged from “Get that %^&$ character away from me!” to “Please can we wait on line for nine hours to hug Mickey?”.

We had one kid have an allergic reaction to apples of all things and got to see the inside of the first aid building as an added bonus. We had one kid (mine) have a giant anxiety attack when she got to the front of the Matterhorn line after waiting for well over an hour. We had the same kid walk away from her cousin who had the only cell phone. We had the cousin with the cell phone frantically calling me on MY cell phone just as I was being pushed away from the dock on “It’s a Small World”, helpless to do anything for my child, causing me to spend the entire ride absolutely frantic that she was going to get lost in Disneyland. (She didn’t, thank God).

We (literally) bumped into people with “Just Married” shirts on and ran over childless couples with our strollers. We had four adults looking at each other in misery, marveling at the idea that people COME HERE VOLUNTARILY!!!

We had seven kids who wanted to “just go home” but couldn’t because we were trapped on Main Street while the Oh My God Could It Be Any Louder parade went by. We had six kids who couldn’t have cared less about the parade (and one that was happy that Mickey waved to him—the same one who didn’t want Mickey anywhere near him before).

We had seven kids that were overjoyed to be let loose in the Souvenir Shoppe while the adults tried to catch their breath and scrape together our change to buy stuffed animals that cost as much as a steak dinner. We had one kid cry when his balloon blew away. We had another kid cry when she couldn’t get everything she wanted in the shop.

We had four exhausted adults drag themselves to the cars, dreaming of a cold shower and colder beer, only to be meet by choruses of “Can we go in the pool when we get home?”

So yes, Disney Freak, I’m not kidding when I say I. Hope. I. Never. Have. To. Go. To. Disney. Again. I’ll be at the pool relaxing instead. That shouldn’t upset you, though…it’s more Disney for you. 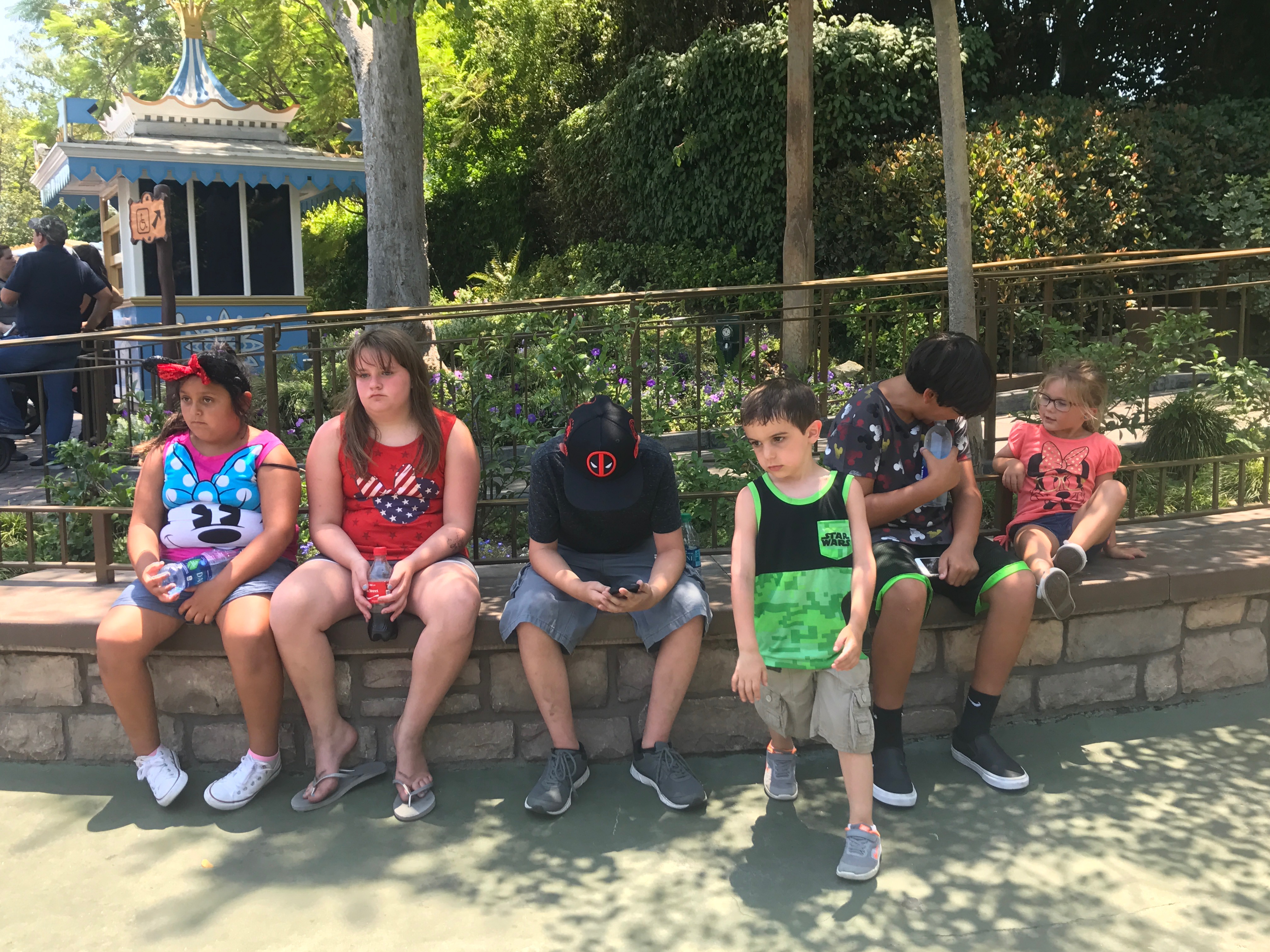 The kids in Disneyland…don’t they look thrilled?!?!?!?