Skip to content
The Bad Mommy Cooks the USA
By Badmommy August 12, 2018April 17, 2019
FYI...my posts may contain affiliate links. This means that if you click on those links and make a purchase, I will receive a small commission at no cost to you. And those commissions are what makes it possible for me to blog. Thank you!

Ah, Connecticut. Connecticut was another state that Hubby and I lived in pre-children, when I worked as a traveling nurse. Unlike Arizona, we enjoyed Connecticut a lot—probably because we were within driving distance from friends and family and were able to go home often. Connecticut was beautiful when we were there (fall and early winter)—the perfect time of year.

There were great restaurants, a million places to shop, amazing foliage and nature, and Yale (I worked at Yale/New Haven Hospital…I enjoyed telling people I worked at Yale 🤣). The hospital I worked at was fabulous and I even made some friends, unlike when we lived on the center of the sun in Arizona.

We might even have chosen to live there had it not been so crazy expensive for us. Also, it’s difficult to spell Connecticut without spell check. (Do you know how many times spell check has corrected me in this paragraph alone???)

Anyway, Connecticut is apparently well-known for Pepe’s Clam Pizza Pie—pizza with clams on it. I, nor Hubby had ever had the clam pie when we lived there, so we were interested in trying this food that had allegedly put New Haven on the map.

Yup, this iconic restaurant, with its iconic pizza, has been a New Haven staple since 1925—literally a mile from where I worked. And yet, we never ate there. In all fairness, we weren’t exactly the foodies that we are now. I mean, we thought Pizza Hut was gourmet, for God’s sake. Plus, we were pretty much dirt poor, too. Just buying groceries without the credit card was a major accomplishment.

As I sit here trashing my former eating habits, I’m chowing down on English muffin pizzas. With wine. At least I used real mozzarella and chunky sauce instead of American cheese and ketchup. 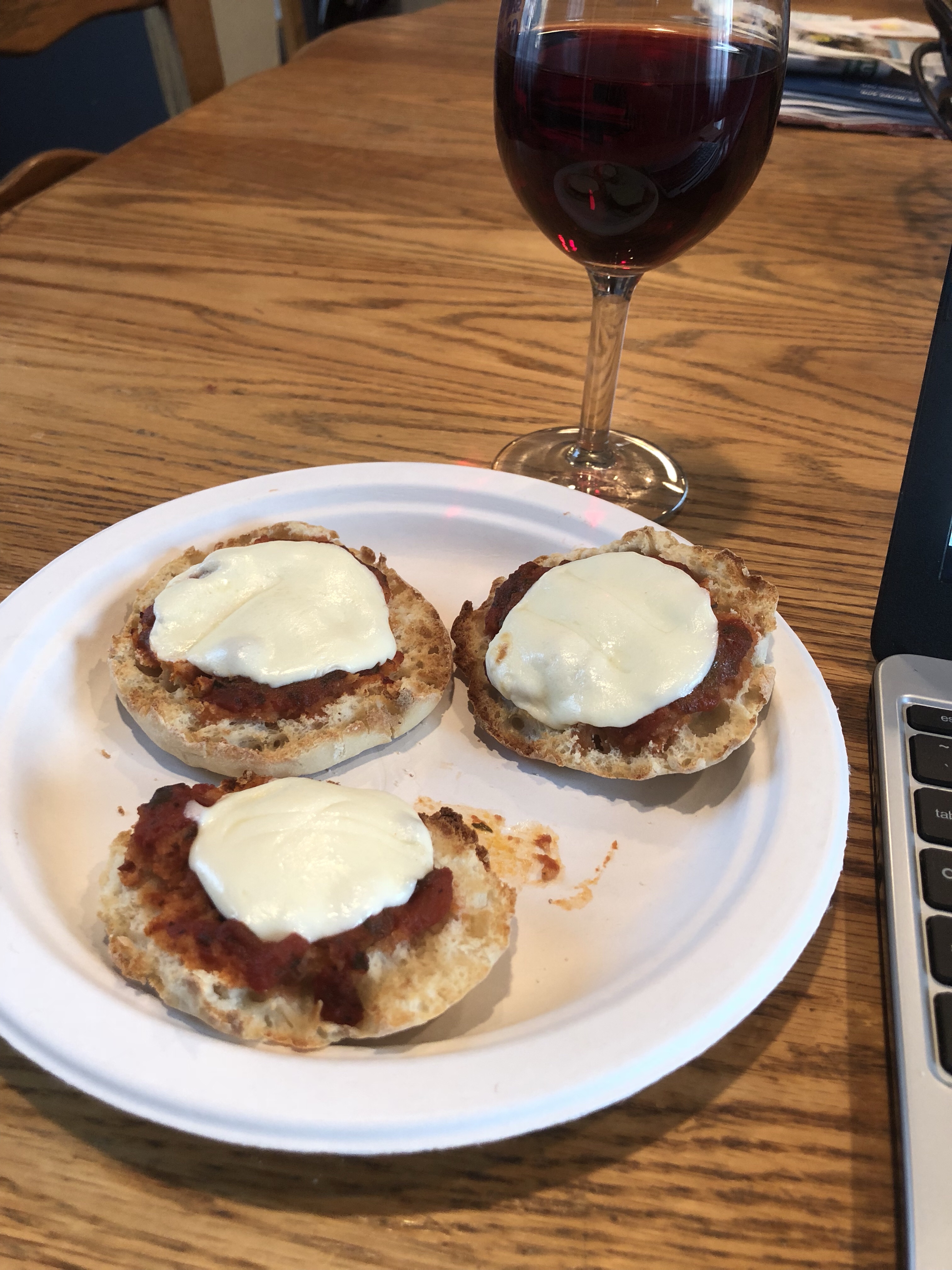 In the NY and NJ area, heavily laden with Italian bred gavones like myself, you don’t have to clarify what you want when you order “a pie”. I had no idea that anyone anywhere else called it anything different. When we moved to Arizona we were in for a rude awakening. We went to the local pizzeria (pizza tasted like cardboard, by the way) and ordered a pie. The girl looked at me in all seriousness and asked if I wanted cherry or apple. 😳

Anyway, I guess in Connecticut they call it something else as well. It’s called apizza (pronounced “abeets”) by the locals. This particular apizza has no tomato sauce or mozzarella (“moots”). Just clams, olive oil, garlic, oregano, and pecorino romano cheese. Impossibly simple.

So how the heck did I mess it up?

Well, I didn’t totally mess it up. It was just a harrowing experience to make. Okay, so maybe I’m being a tad dramatic, but it involved multiple trips to the supermarket, which is not good when the recipe has five ingredients, four of which we have on hand on a regular basis. And surprisingly, we had the FIFTH ingredient (the clams) in the freezer as well. So what went wrong? I shouldn’t have even had to go to the store once, let alone multiple times. The problem was the pizza crust.

You see, I was planning to just grab a ball of dough from my local pizzeria, just like I do when I make pepperoni bread. However, I read the article on the clam pizza a little more closely and it seems that this pizza is thin crust, requiring a different kind of dough…one I would need to make myself. Cue immediate anxiety attack.😬 I was petrified I’d screw the dough up. And if I screwed up the dough, there was little to no chance that the pizza would taste good. There was a lot riding on my dough making ability. (Breathe into paper bag here.)

Stop Being a Baby, Heather

I stopped breathing into the bag and checked out the ingredients for the dough. Immediately, I was relieved to learn that the dough only consisted of yeast, flour, salt, and oil. I went to the store to get the yeast since it was the only thing we didn’t have. After twenty minutes of wandering up and down the baking aisle (and asking the unhelpful customer service girl for help), I left the store yeast-less and defeated.

The next time I was in the store, I went to the baking aisle to try again. Luckily there was a guy stocking shelves, so I asked him where the yeast was. He replied that oddly enough, the yeast was kept by the hot dogs. Weird. But I was thrilled I found the yeast and was determined to make the dough that night.

Until I got home that night and read the recipe again. Yup, I got the wrong yeast. I needed instant yeast and I got regular. (Who knew there is different kinds of yeast???) Back to the store I went. Sigh. This wouldn’t be a Bad Mommy meal if it didn’t cause me agita, right?

Armed with the instant yeast, I began the prep the dough, which needed to be made the day before the clam pizza because it needs to sit in the fridge in a bowl overnight. I won’t bore you with the details of this whole process—while the ingredients were simple, the steps were a little complex. If you want to know how to make the dough, you can read the recipe at the end.

Get to the Pizza Already!

The next day come hell or high water, we were having this pizza. High water actually happened—we made this pizza in the middle of one of the many thunderstorms we’ve been having lately. Friends of ours stopped by mid pizza making and were subjected to our cooking and cooking arguments as they were unable to leave safely during the storm.

There were many tears during this meal prep (mainly from me), a lot of yelling (both me and Hubby), and burnt fingers (Hubby). The dough actually did what it was supposed to in the fridge. Once I got it out and tried to roll it, well, that was a different story. I have some sort of defect when it comes to rolling out pizza dough—3 of my uncles worked in pizzerias, I’m pretty sure they would be mortified if they knew I not only cannot toss dough up in the air, I can’t even roll it out with a rolling pin. 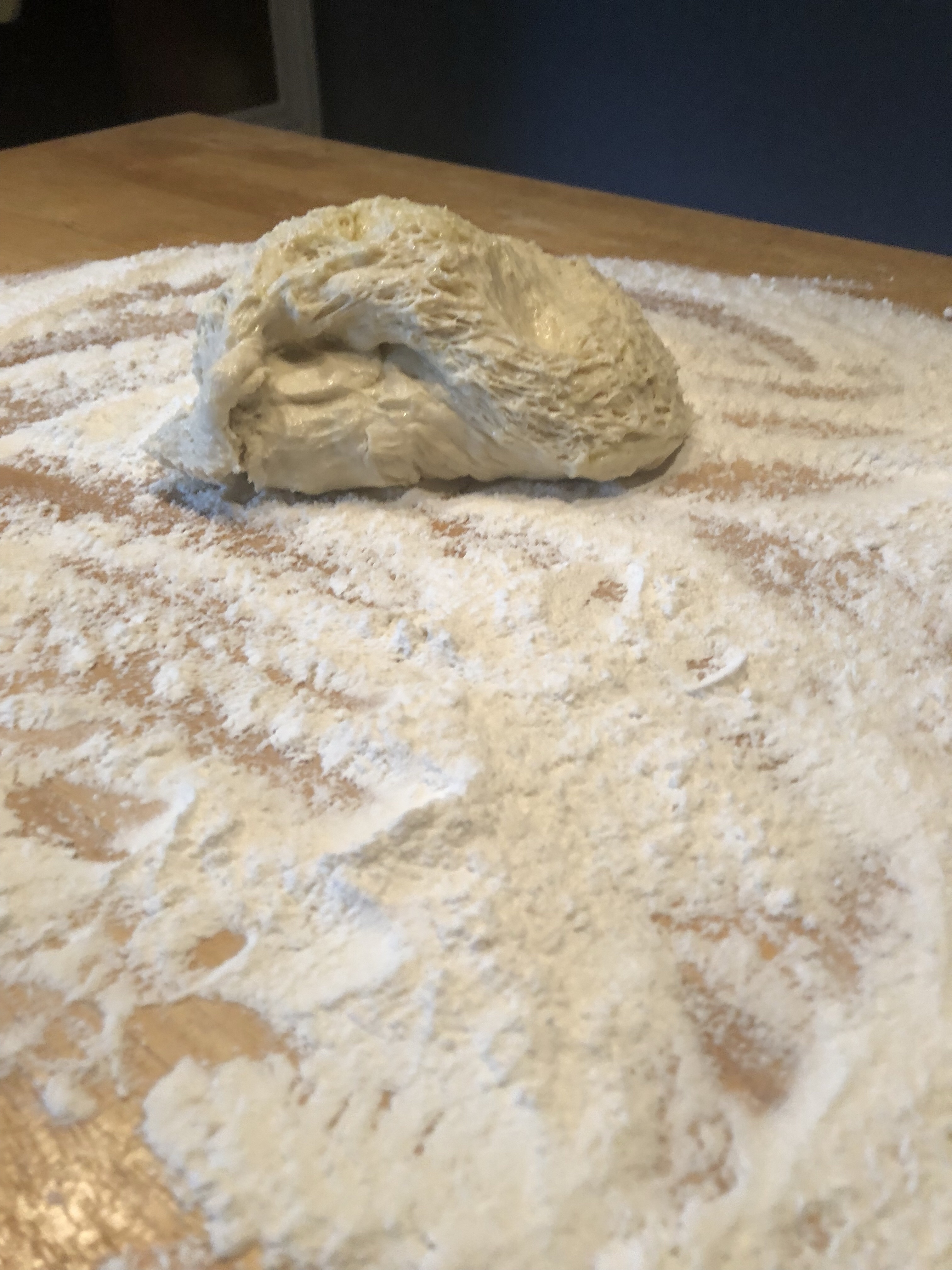 After about 20 minutes of trying to roll this dough out, I succeeded in actually making the dough in the shape of Connecticut. This was not intentional. I wanted round like normal pizza.

Hence the tears. That’s when Hubby stepped in and discovered it’s not so easy:

He used my second ball of dough so that the crust wouldn’t be tough from me manhandling it for almost a half an hour—the dough recipe yielded two balls of dough.

There were holes and it wasn’t round, but it was rounder than mine. It would have to suffice.

You see, in reading the directions, we discovered that we had no idea what a “peel” was…we only knew that we didn’t have one, whatever it was. Hubby yelled at me to Google it quickly. I yelled at Siri when she refused to cooperate. Hubby yelled at me and told me to type it in and stop relying on Siri. I yelled back that my hands were full of dough. And so on and so on. You get the picture.

Turns out that a “peel” is that huge wooden spatula thing they use in pizzerias to get the pies in and out of the oven. We would have to create a makeshift one to get the pizza on the stone (which was warming in the oven, per the directions of the recipe).

First though, we added the clams, garlic, olive oil, Pecorino Romano, and oregano without incident. Hubby got to use his squeeze bottle that he bought at the kitchen supply store. (It’s the little things that excite him…)

Then it was time for the oven. There was more yelling and burnt hands. 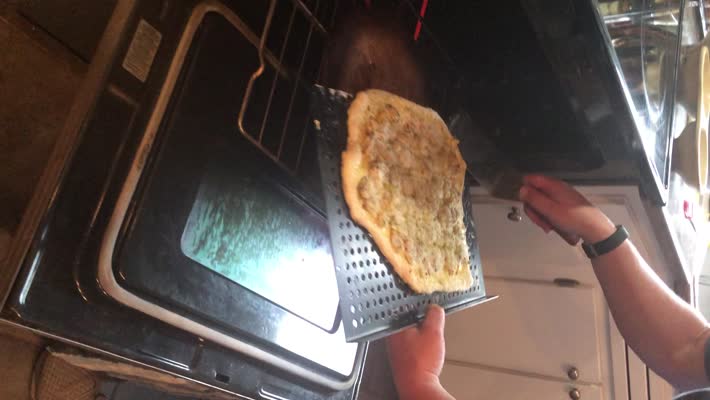 But it was still CHAOS

Since our oven is craptastic, the smoke detector was wailing during most of the cooking process. And it was pouring out, so we couldn’t open a window—we had the kids on “smoke detector fanning duty” for most of the time the pizza was cooking. Talk about stressful cooking!

After all that work, I was ready for complaints from the kids. It was clam pizza after all. I didn’t expect them to eat it, even though it came out smelling and looking delicious. The garlic smell permeated the house, making my mouth water. 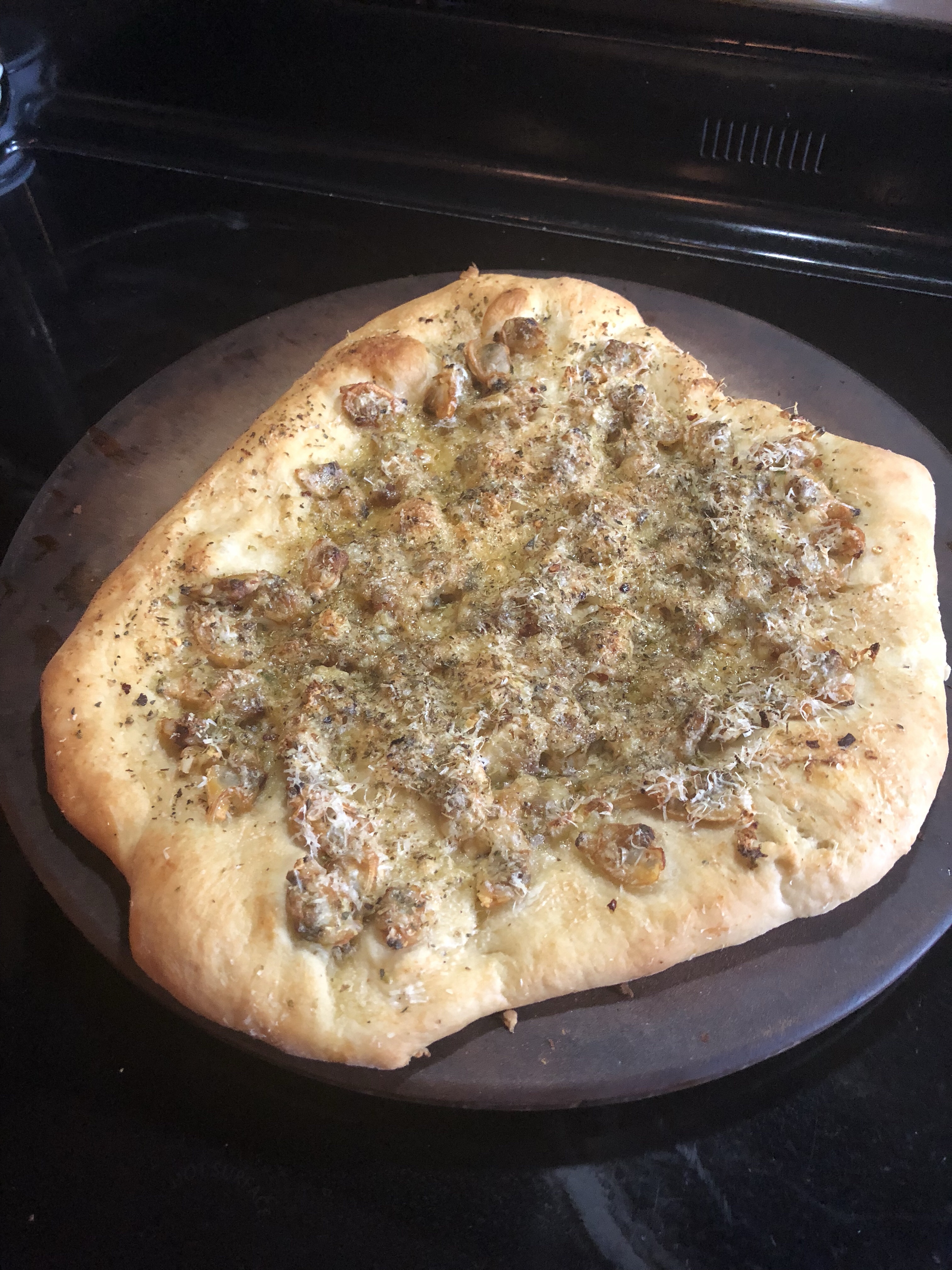 Surprisingly, it was well received and everyone was looking for more pizza, making me wish that I hadn’t manhandled the first ball of dough so badly that it was unusable. But at least we have a new meal to make—hopefully I eventually learn how to toss pizza dough. 🤪 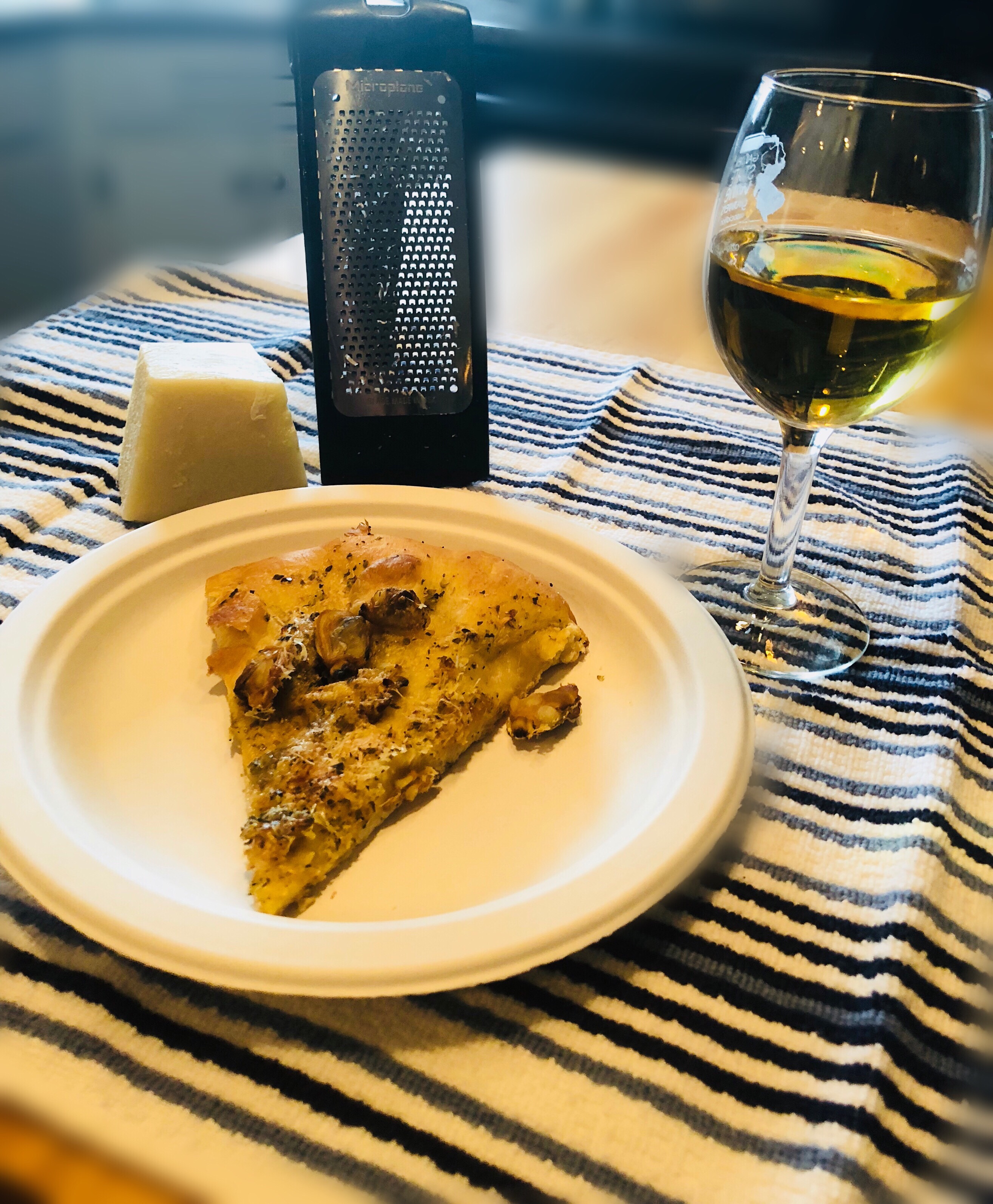 Want to try this? Pin it Here!