Skip to content
The Better Me Project
By Badmommy April 3, 2018April 18, 2019
FYI...my posts may contain affiliate links. This means that if you click on those links and make a purchase, I will receive a small commission at no cost to you. And those commissions are what makes it possible for me to blog. Thank you!

Have a vision. Or in other words, create a Vision Board.

No, I’m not kidding. I haven’t lost my mind. A vision board is a powerful way to visualize your goals and make you more focused on them, thus more likely to actually achieve those goals.

I have to confess…I didn’t create my vision board on Day 3. I created it almost at the end of the project, Day 20 something or other.

In retrospect, I should have created it much sooner. In fact, it should have been my Day 1 project. I admit, I kind of scoffed at the idea. Just like meditation, it sounded way too new age and hippy-dippy for me.

Not only did the “Badass” book tout the benefits of a vision board, my yoga instructors have actually held Vision Board Workshops. Still, I didn’t think I needed to go as far as sitting down and cutting pictures out of a magazine and gluing them to poster board to get the benefits of a vision board. I would just sit right at my desk and think about my goals. I’d write them down, too. Words are just as powerful as pictures, aren’t they?

Turns out, I’m a bit of a visual learner. Sure, I had my notecards that I made for my Better Me Project and I wrote down my goals and all that, but I really did need a tangible object in my visual field on a daily basis to remind me of where I wanted to be heading.

I was still not sold on the gluing pictures on a piece of cardboard. (And besides, we don’t get any magazines in this house other than firefighting magazines…what should I do, cut out a picture of a stove on fire and put an X through it?)

So instead, I made a “Vision Board” board on Pinterest: 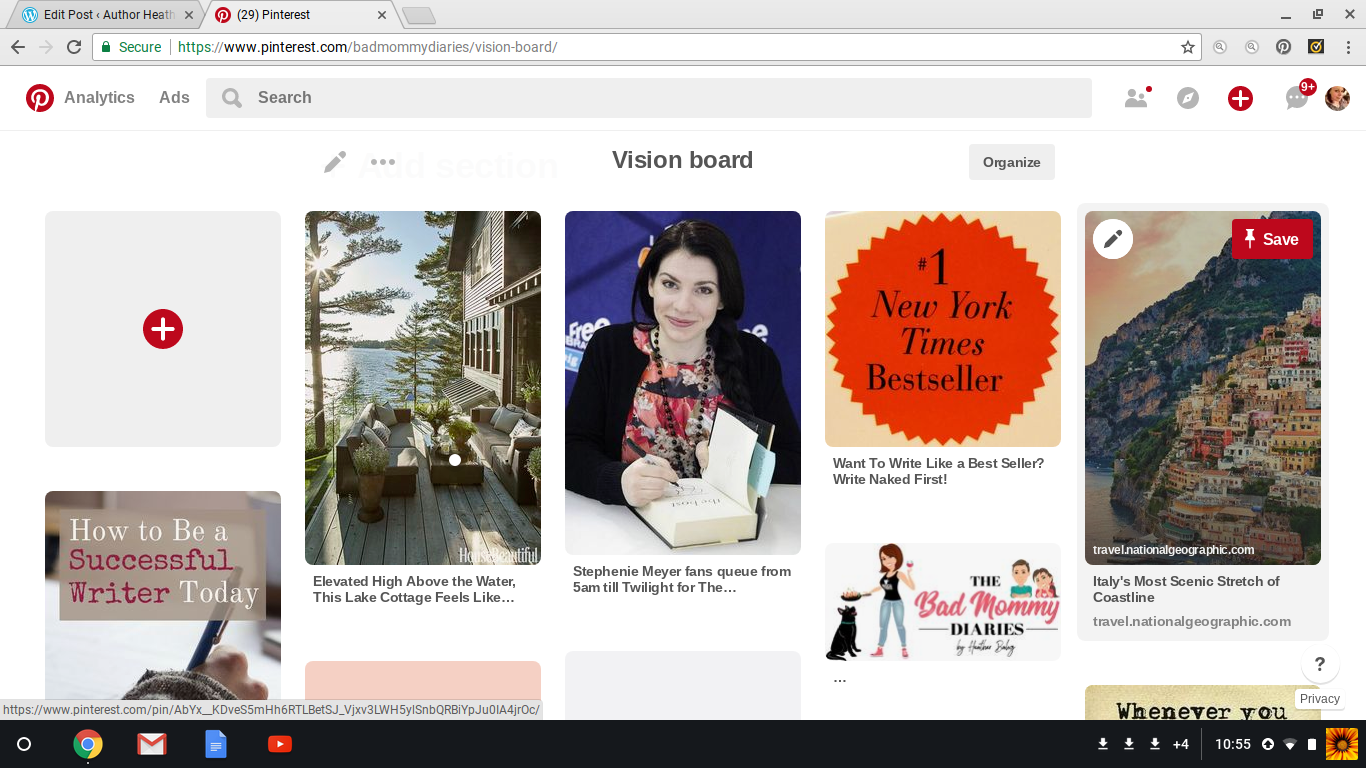 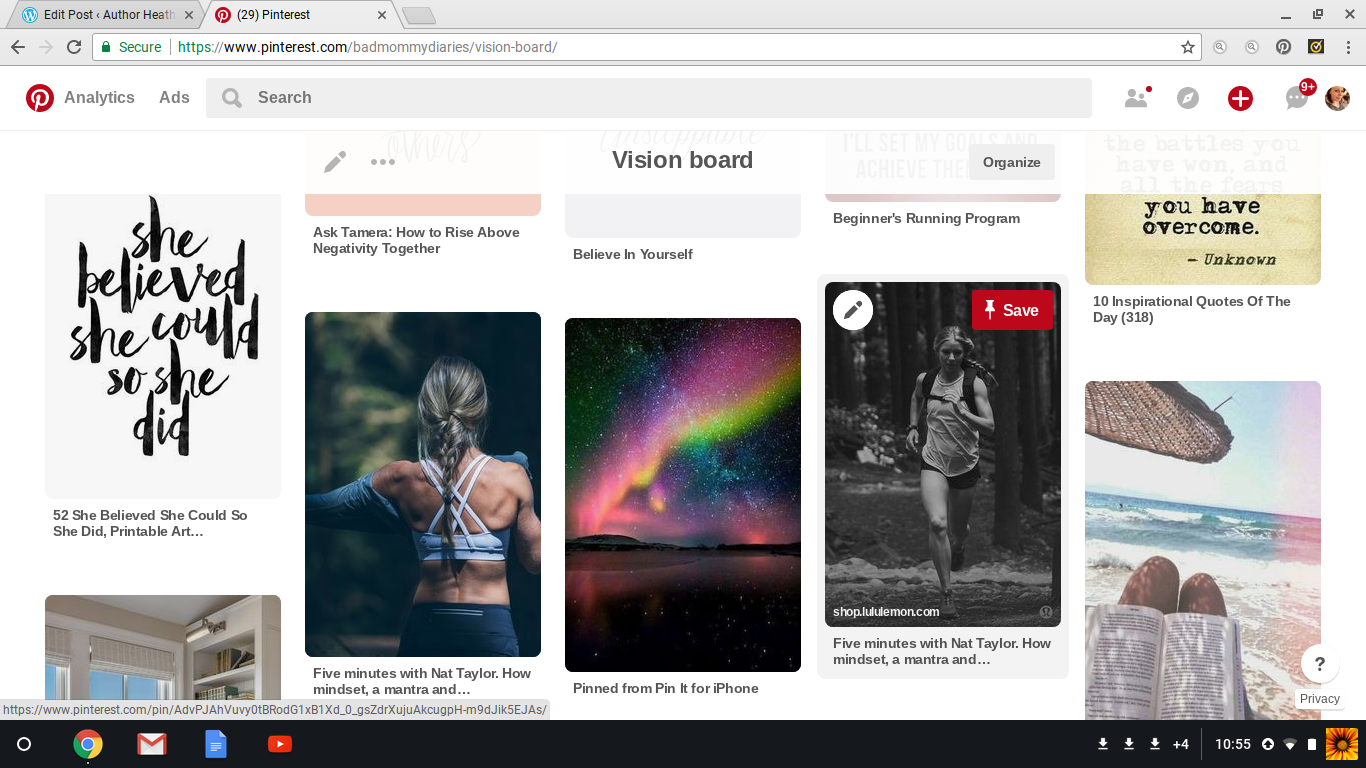 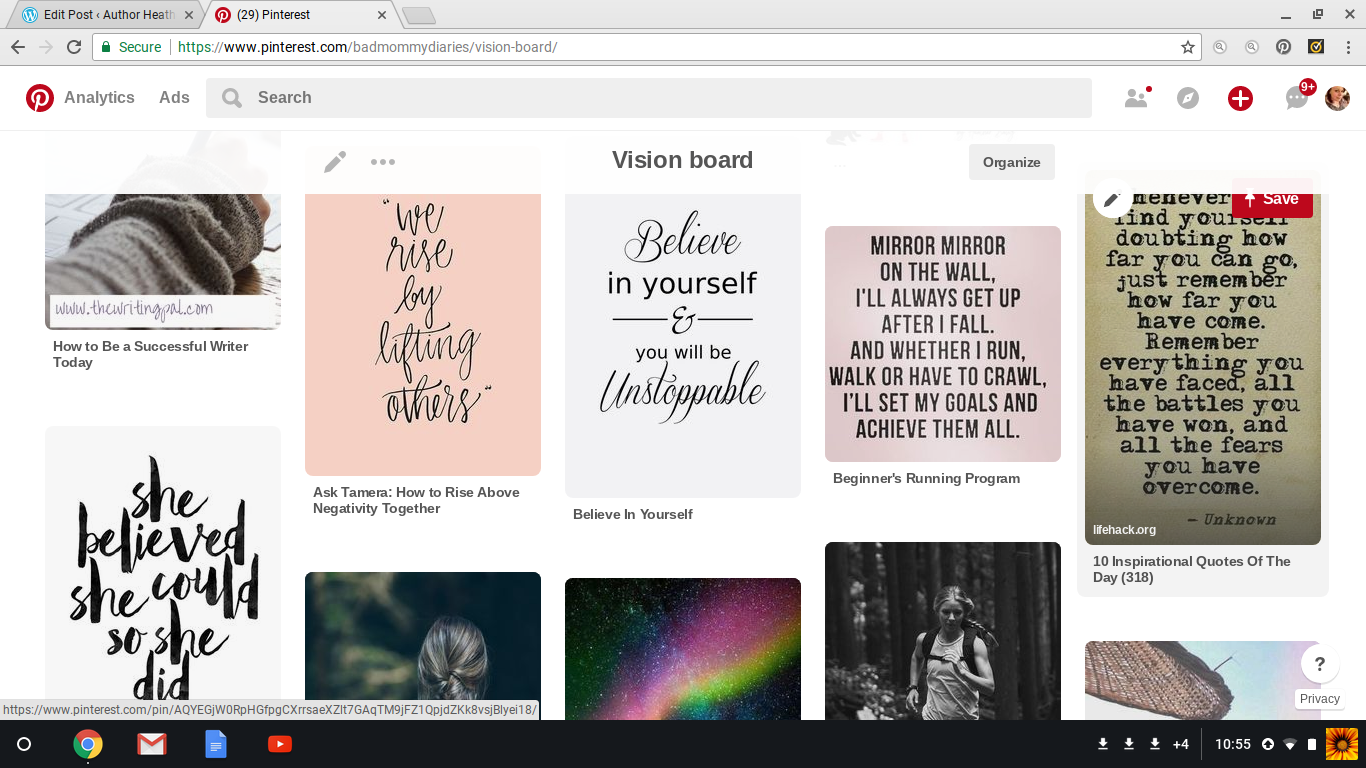 It’s kind of all over the place and impossible to look at in its entirety. Plus, I have to pull it up on my phone or the computer. It’s not out there, in my face like an actual vision board that I put on that darn poster paper would be.

Sighing heavily, I realized that this project would be next to impossible if I didn’t make the &*%$ vision board. Since we didn’t have magazines to cut out pictures from, I spent a ridiculous amount of time on the computer googling the exact pictures I wanted.

Do you have any idea how hard it is to find pictures of places or concepts that only seem to exist in your mind???? I needed pictures that expressed my goals, places I wanted to visit, and the feelings I wanted to have when I looked at my vision board.

I apparently spent so much time on the computer that hubby began to sulk and claim I was interfering with his computer time. Oh, and I that I broke his chair. (The chair has been broken for a month, but Mr. Cheapo won’t buy a new one because it would take him forever to get his butt imprint the way he wants it on a new chair.)

Anyway, after about three hours, I had a quite a few pictures. I couldn’t find everything I wanted, but this board, like the whole project, is a work in progress.

I found pictures of Aurora Borealis because I really want to experience that. I included pictures of Italy, too, because I’ve always wanted to go there. While there are plenty of other places I want to visit, those two were the most important to include because the pictures themselves were very inspiring.

I included some inspirational quotes—a lot of them were dorky, but a few spoke to me and my feelings about success and achieving my dreams.

I printed out pictures of places I’d feel relaxed reading and writing, to remind me that a writing life could be mine if work hard. I also cut out pictures of strong, kick ass women, running and lifting weights to remind myself that I have to be strong to not give up on my goals.

While these pictures were not all inclusive, I know I can add to it or take away any of the pictures as my goals and visions change. So instead of gluing my pictures to poster board, I used the pretty cork picture board in our living room. Yup, that’s right. Not only is my vision board where I can see it every day, it’s on display for everyone.

The kids immediately began to mock me, but I’m not bothered by them. I can’t be embarrassed by my vision board…it’s me…it’s who I want to be. And it’s who I will be with some sweat, blood and tears. 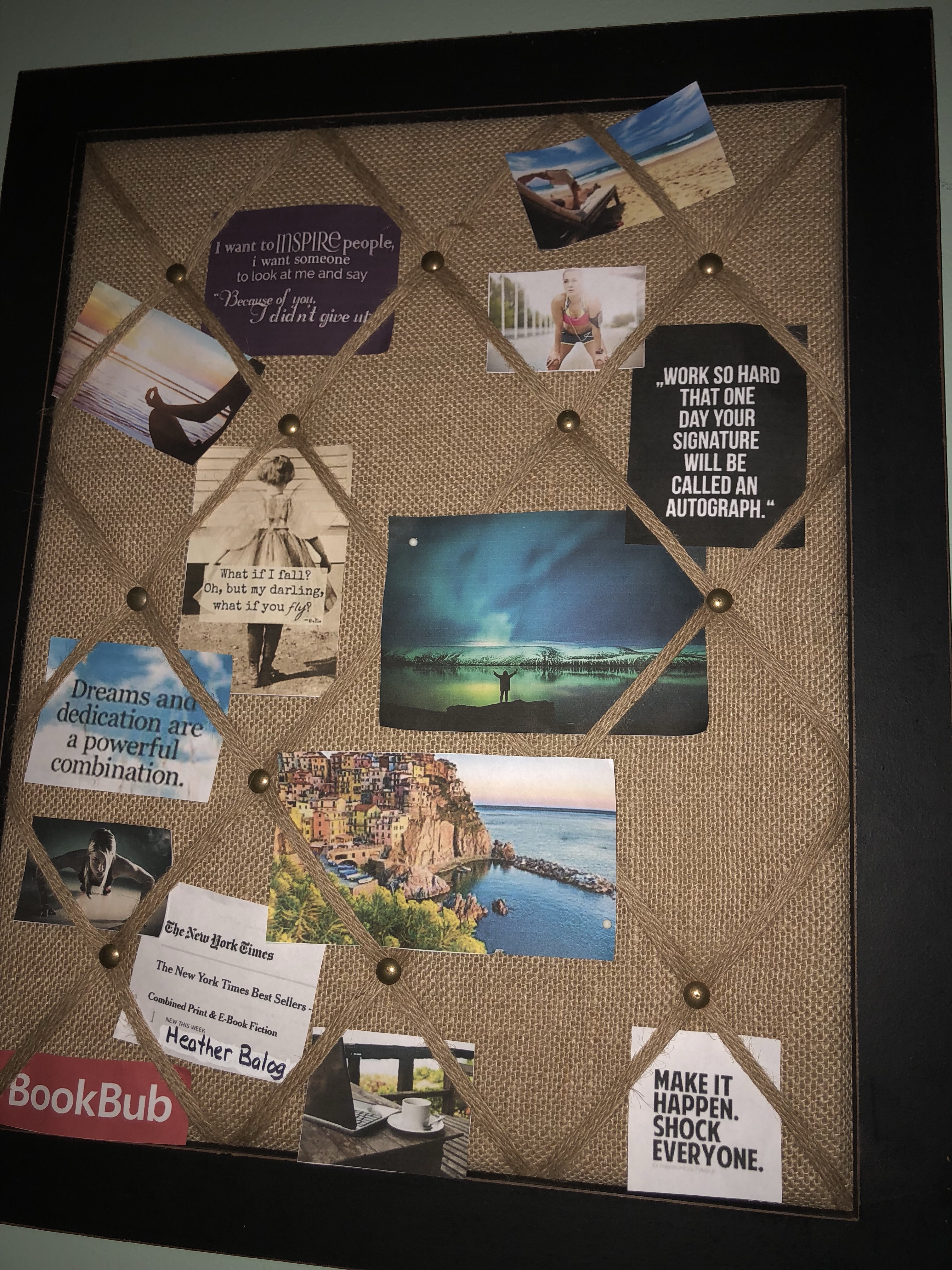