Skip to content
The Bad Mommy Cooks the USA
By Badmommy April 3, 2018April 18, 2019
FYI...my posts may contain affiliate links. This means that if you click on those links and make a purchase, I will receive a small commission at no cost to you. And those commissions are what makes it possible for me to blog. Thank you!

When we pulled Ohio, nothing came to mind as far as cuisine was concerned. After a little research I discovered that Ohio is known for one really common food item—Cincinnati style chili. There’s even a restaurant chain called the Skyline that specializes in this chili. From what I could tell, it seems to be a dietary staple in Ohio.

Texas chili (or chili con carne) is beef (I use ground beef) in a tomato based sauce with chili spices. We like our chili mixed with corn and elbow pasta. The kids and I are divided on beans vs. no beans so we usually alternate with the beans. Hubby hates beans of all kinds and refuses to eat the chili I make (hence why I usually make it when he’s working). It’s really difficult to get the kids to change things up as well. They all made gagging noises when they discovered there was cinnamon in Cincinnati Style Chili. The kids are also married to the elbow pasta that usually accompanies my chili and they made faces when I told them this chili is served with spaghetti. Cincinnati Style Chili was going to be a hard sell.

Anyone Want a Three-Way?

I did my best to recreate the Skyline Cincinnati Style Chili classic.

Heat 1 TBSP oil in sauce pot over medium-high heat. (I used my Pampered Chef rock crock). Then add onions (from one finely chopped sweet onion) and cook until they are tender.

Stir for about a minute and then add 2 cups of chicken broth, 16 oz of tomato sauce, 2 TBSP of apple cider vinegar, 2 TBSP of tomato paste, 2 tsp of brown sugar, and 2 tsp of Worcestershire sauce. Sprinkle in some salt and pepper, too. 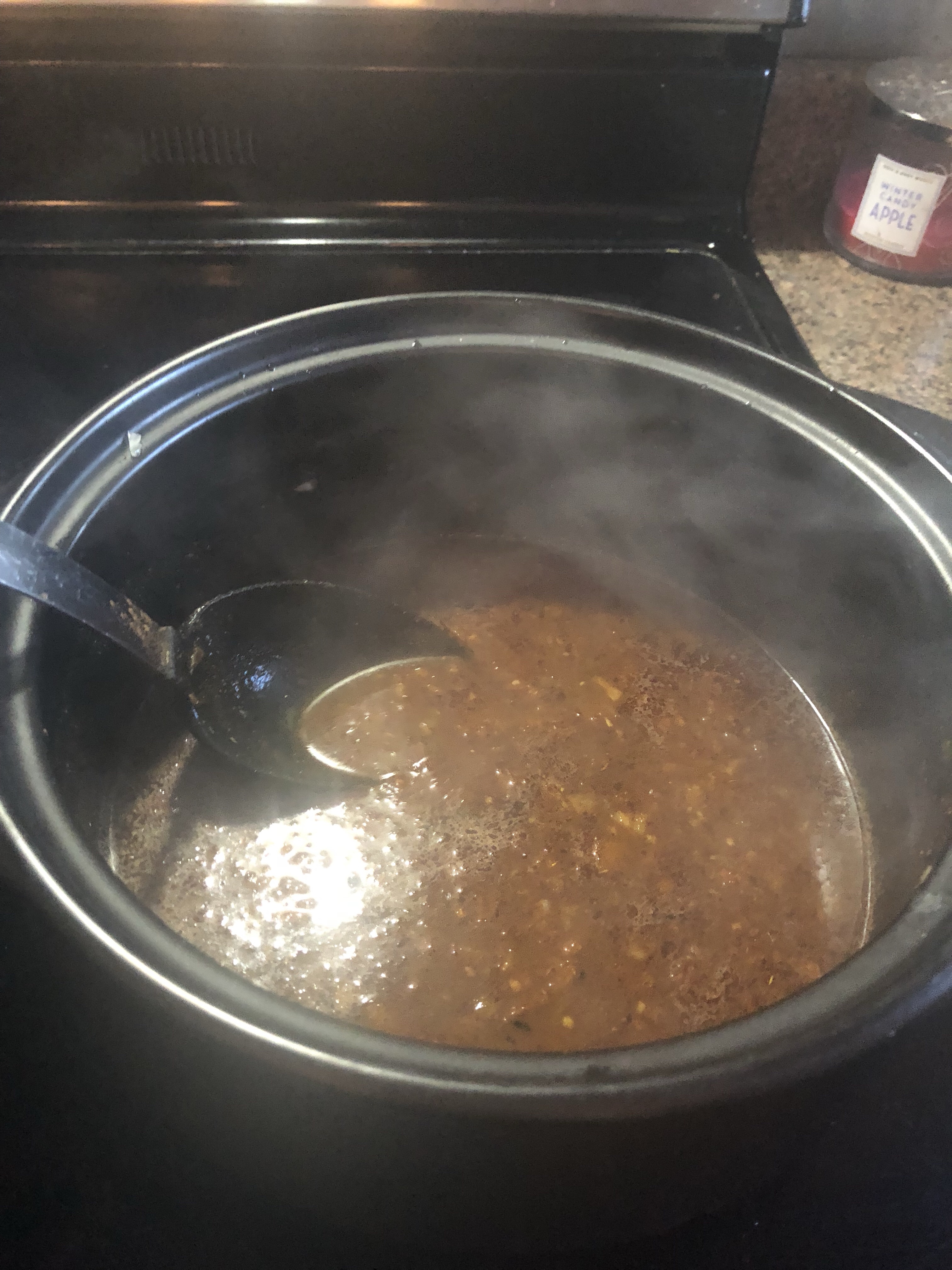 It was smelling pretty awesome at this point.

At least to me. The kids wandered in and scrunched up their faces asking “What is that awful smell?” They were still focused on the cinnamon and the fact they didn’t believe it could possibly taste good in chili.

I Got a Little Worried though…

Anyway, the recipe instructed me to add the 2 lbs of ground beef at this point in time, so I scrolled back to the top, frantically searching for the point where I was supposed to brown this beef…did I miss that part? I reread the whole recipe…I couldn’t find it anywhere! Did that mean I was supposed to add this raw meat to the sauce?

I was really nervous about this. Usually I brown my beef and then add the sauce, but heck, this was a different style. If they said add the beef, I was adding the beef: 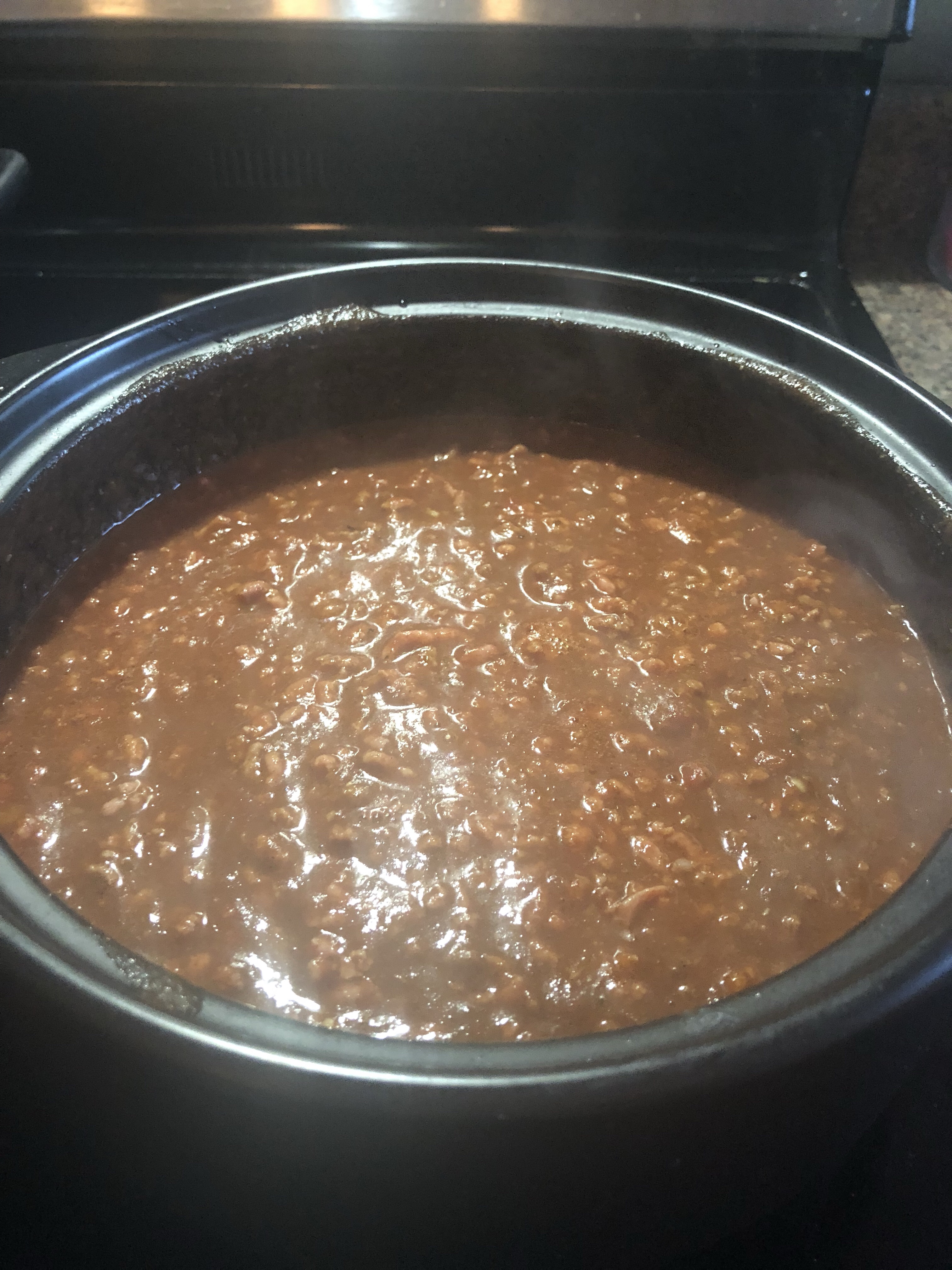 Bring the chili to a boil and then reduce it to a simmer for an additional 15 minutes. Voila! This was a quick recipe to whip up for a weeknight. After it was cooked, I set out the toppings: 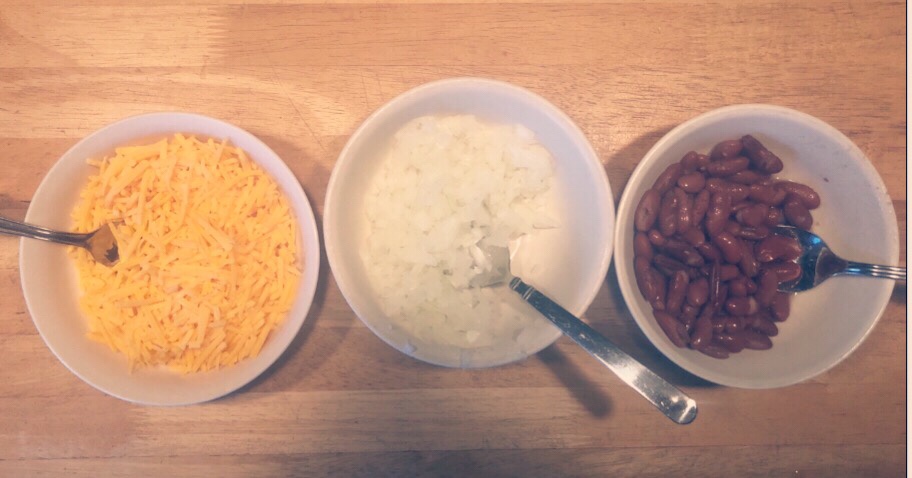 and called in the family for quick instructions on how to eat this chili. They mostly ignored me and made it any way they wanted.

That was mine, hubby’s, and my daughter’s. My son ate the chili and spaghetti separately so that doesn’t even count and was definitely not photo-worthy.

The reviews of the Cincinnati Style Chili were mixed.

I really loved it. It was a different take on a meal I love anyway. My daughter also liked it a lot, but my son was so annoyed by the spaghetti that he couldn’t get past it to enjoy the meal. Hubby was also not a big fan, but like I said, he’s not really a chili person to begin with.

This one will have to go in the “meals to make when it’s just me & my daughter” category. I’ll have to cut the recipe in half the next time I make it. Even though I had this for lunch a few days later, I still ended up throwing out a ton of it. (Plus spaghetti does NOT taste good warmed up). If you like chili, I would definitely give this Cincinnati Style Chili a try.

One thought on “Cincinnati Style Chili”