Skip to content
The Bad Mommy Cooks The Bad Mommy Cooks the USA
By Badmommy November 4, 2018April 18, 2019
FYI...my posts may contain affiliate links. This means that if you click on those links and make a purchase, I will receive a small commission at no cost to you. And those commissions are what makes it possible for me to blog. Thank you!

Seven states left in our USA cuisine tour—state number 43 is Colorado. For our Colorado meal, we made some Chile Colorado. Actually…

I Really Messed This One Up…State Food Wise

So when I looked up Colorado cuisine of course I saw that chili was popular in this state…you know because of cowboys needing to throw things in a pot and heat it up over a campfire and all that.

Somewhere along the line, I latched onto a Chile Colorado recipe because”Colorado” and “chile” were both in the name. In case you were wondering, where the “Colorado” part comes from isn’t completely know. It could be named after a type of RED pepper…grown in Mexico, NOT Colorado, the state. (Insert face palm here) The actual type of Chili that is popular in Colorado (chili with an I), is a green chili. (Chile usually describes the pepper and chili is the meal.)

At this point in time, I’ve done so much research on foods that can you really blame me if things get kind of muddled in my head? You’ve only read three paragraphs about chili and chile and you’re already confused, aren’t you? Go ahead, Google “Colorado Chili”. I’ll wait…yeah, all those chile Colorado recipes come up, don’t they?

In addition, I had gotten all the ingredients for a “Chile Colorado Slow Cooker Beef”, not even Chile Colorado itself. It was a royal disaster—as far as the state tour was concerned. By the time I realized my mistake, I was already prepping the meal.

I Forged Ahead Anyway

Honestly, what was I going to do? Waste a perfectly good piece of beef? I had spent a half hour looking for the canned red chile sauce in my grocery store and ended up making my OWN. I had to dehydrate chiles and then re-hydrate them. And then blend the chiles with spices in the Ninja and then cook it on the stove.

This was all before actually making the beef in the slow cooker. Yeah, you better believe I was making this Chile Colorado. Besides, what were we going to have for our Colorado meal if we didn’t have Chile Colorado? Rocky Mountain Oysters? By the way…new discovery…those aren’t actually oysters. They’re bull testicles. (Vomit here) Why is everything misnamed in Colorado? It’s confusing me.

And why are there so many different types of chili? We made Cincinnati Chili for our Ohio meal, and I know a different kind of chili is popular in Texas (probably closer to the type of chili that’s popular in Colorado). Why do the chili people need to confuse things????

On To the Chile Colorado Sauce

The chile sauce was, of course, the star of this meal. So therefore, if I couldn’t find the sauce, we couldn’t have this meal. I was determined to make Chile Colorado, come hell or high water. This was before I realized I was making the wrong thing, of course.

I stood in the Hispanic foods section of my grocery store in tears, traumatized by the fact that there were seven billion different sauces and none of them were the sauce I needed for this meal. I went up and down that aisle ten times…no luck. But I wasn’t going to admit defeat (even though if I had admitted defeat, I could have made something else…like a Denver omelet or something like that…live and learn).

So I quickly googled a recipe for red chile sauce on my phone and started to gather the ingredients for that. The only problem was…I had bad service in the store so my phone kept shutting down. And I had to keep reopening the recipe. Except, I might have opened several DIFFERENT recipes instead of the same one.

(Listen, it’s been a stressful month…my brain feels pickled.) I gathered my multi-recipe ingredients and left the store in the middle of a Nor’Ester in order to make this Chile Colorado, people. So what if it wasn’t the right thing. 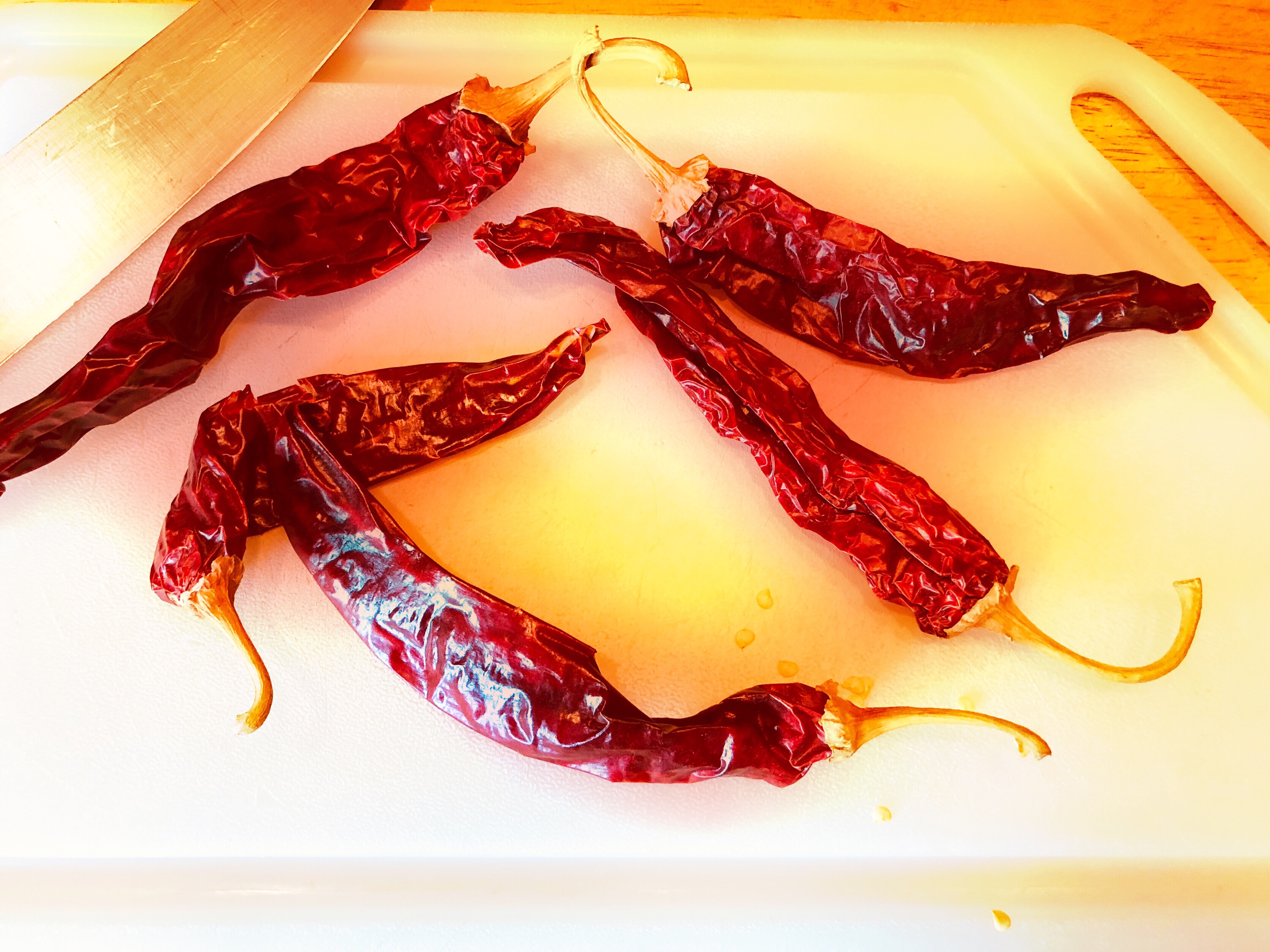 Considering that it’s a green chili that’s popular in Colorado that is… Anyway, like I mentioned before, you have to further dehydrate these chiles after you remove the stems and seeds (the seeds just fall out when you shake the chiles), by placing them single layer on a baking sheet and baking them in the oven at 375 for 3 minutes. You will smell a sweet aroma from the oven—it’s pretty delightful, actually.

Then soak the chiles in a bowl of warm water for about a half hour. Take the peppers and soaking water and blend them with garlic, cumin, and chili powder. Try the Ninja for this–it works so well! Then stir flour into the oil over medium heat to create a roux. Add the blended chile mixture. Simmer for about ten minutes.

Now On To the Slow Cooker

Put the chuck roast in the slow cooker and pour on the chile sauce. Add bouillon, chili powder, cumin, onions, garlic, oregano, and red pepper. Cover and cook for 5 hours. The meat should pull apart easily with forks. This is very similar to the Mississippi River Roast that I make. 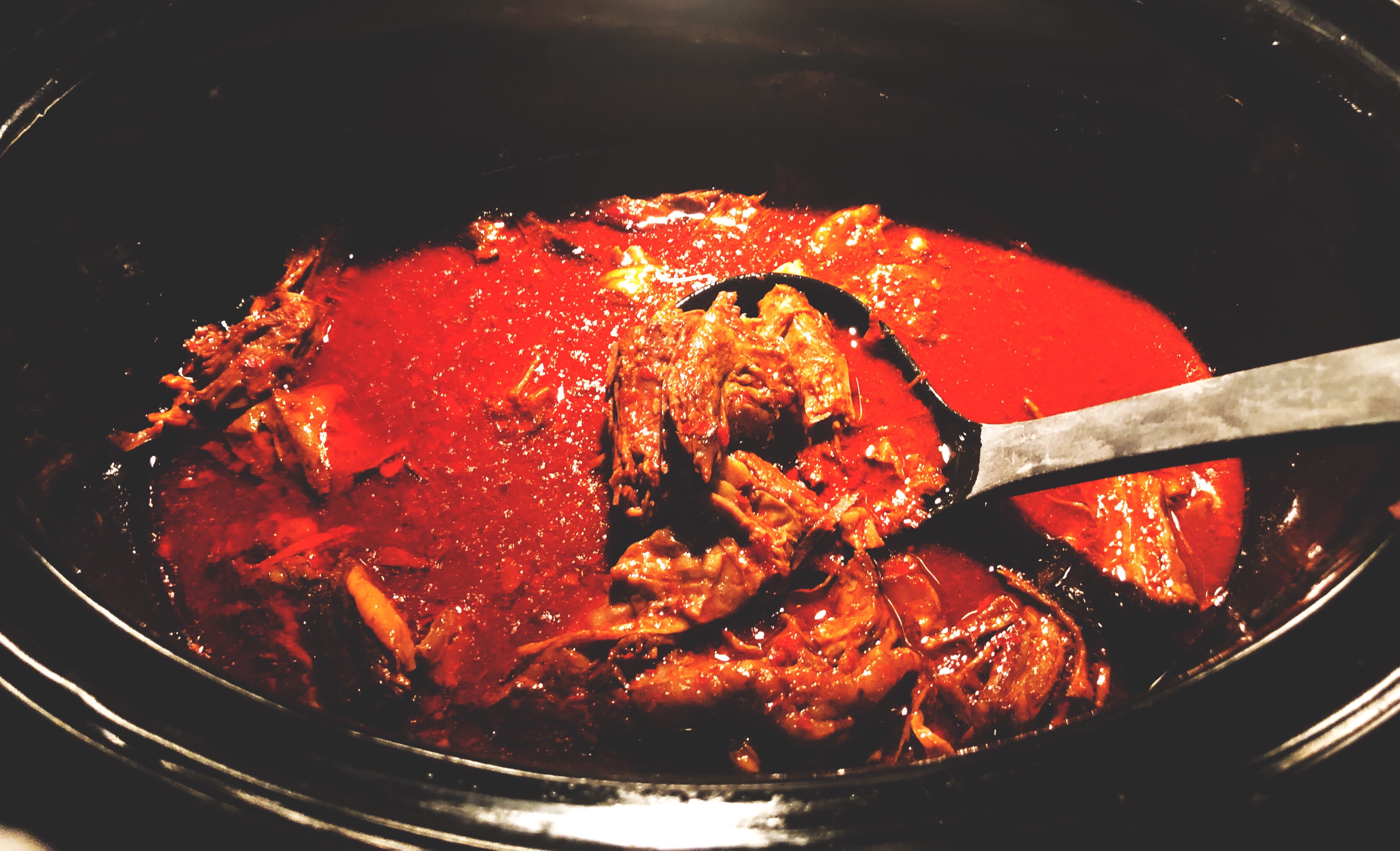 Yup. That’s it. Looking for the sauce and then making my own was the most difficult part of this recipe. One of the great things about this recipe is you can eat it a variety of ways—in burritos, in tacos, over rice, or even by itself. We had it over rice, mixed with some broccoli, ‘cuz that’s how we roll.

I also sprinkled some more chili powder over the top. It was quite delicious. You can add more chili powder to the slow cooker as it cooks as well, if you like it more flavorful. Enjoy it any way you’d like…just know if you go to a restaurant in Colorado…they most likely won’t have this Chile Colorado on the menu. 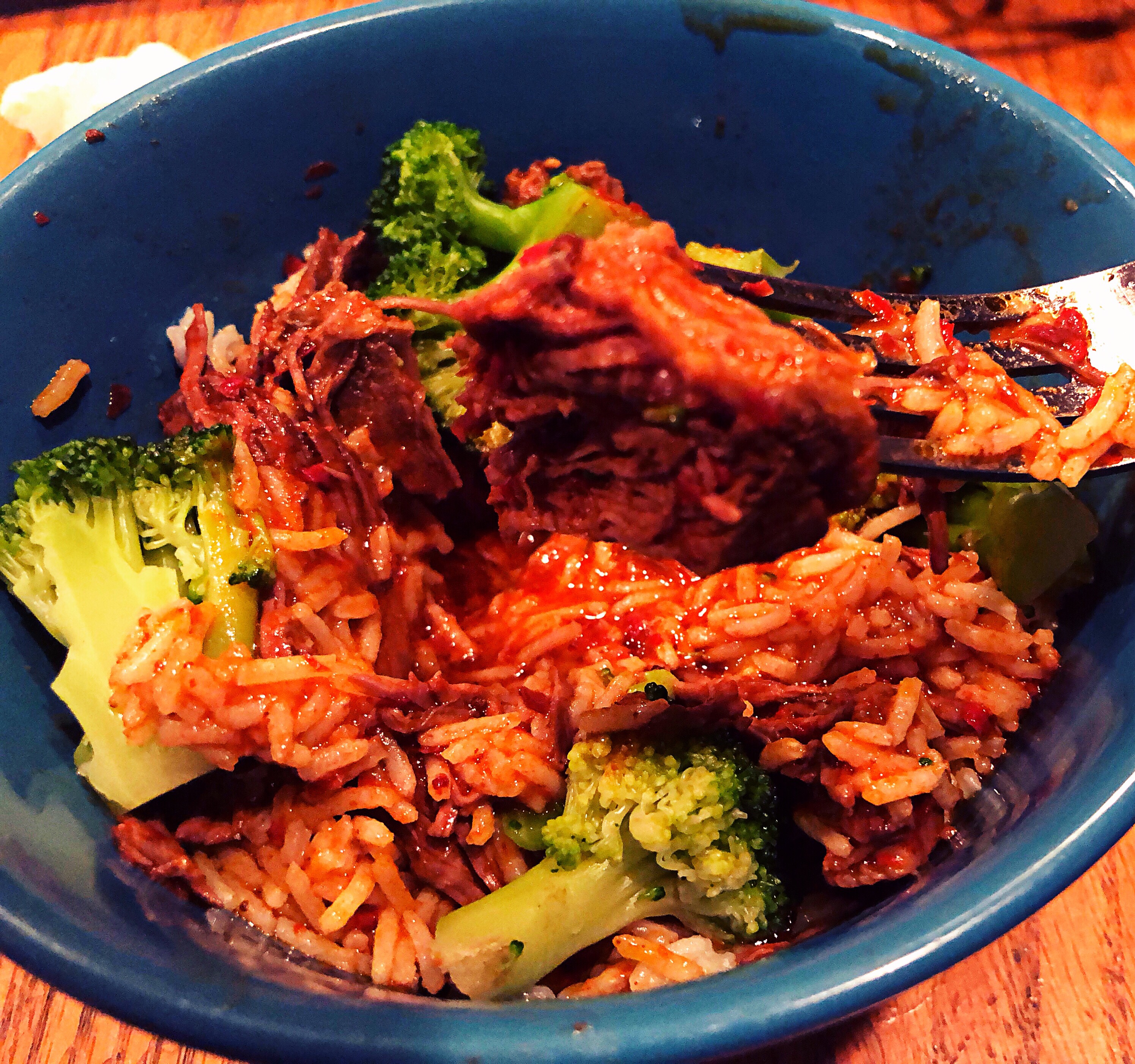