Skip to content
The Bad Mommy Cooks the USA
By Badmommy April 19, 2018April 17, 2019
FYI...my posts may contain affiliate links. This means that if you click on those links and make a purchase, I will receive a small commission at no cost to you. And those commissions are what makes it possible for me to blog. Thank you!

First, a warning. This blog post about Louisiana Gumbo will be long. Between talking about Louisiana and the actual making of this meal, I’ve got a lot to say. But I assure you that it’ll be worth it.

While every state has some rich history, there are not too many with such deep rooted FOOD histories as Louisiana’s. The main cuisines of Louisiana are Creole and Cajun…a combination of French, Spanish, West African, Native American, German, Haitian, and Italian influences, in addition to Southern US influences. Louisiana was founded by the French, hence the slow and complex cooking found in Louisiana cuisine.

I’ve discovered that the main difference between Creole and Cajun cooking is that Creole uses a tomato base, while Cajun does not, and that Creole is considered a little more “high brow-city food” while Cajun is more “country food”. Here’s a handy Pin that outlines the differences.

Full disclosure: Hubby went through an “I Love Emeril” phase quite a few years back. At that point in time, despite the fact that visiting New Orleans has been a bucket list item for me for quite some time (I had a teacher in 5th grade describe the above ground graves and I was instantly morbidly fascinated), I did not share his enthusiasm for New Orleans cooking.  I wasn’t big on trying new things. I wasn’t big on spices. That was the old me. New me wants to shake old me and tell her not to be such a weenie and try new foods!

Don’t Be a Weenie

The purpose of this State Food Tour is to experience the cuisine of other states and try new things. Sometimes it’s difficult to find a meal that we want to try and that we haven’t really had before. Not with Louisiana. There was soooooo much to choose from when we had to pick what we were making for this state. Did we want Jumbalaya? Crawfish? Gumbo? Etouffee? Shrimp Po’Boys?

There aren’t too many other states with such an overwhelming selection of choices. Even though I really wanted a Shrimp Po’boy (soooo good) we decided to go with a Cajun Gumbo…one that was loosely based on a recipe by the Great Emeril himself (we made some changes based on preferences and availability of supplies).

Gumbo is a bit complicated…

After pinning a few recipes and reviewing them, I realized that the gumbo was going to be a little more complicated than I’m comfortable with. Over the course of this project I’ve come to learn a thing or two about cooking, and I would even dare to say that I’m actually improving.

That’s not to say that cooking doesn’t scare me. Complex and time consuming recipes paralyze me with anxiety. I’m always afraid I’ll ruin the meal or have to perform too many steps at a time and I’ll get overwhelmed by that. I didn’t have to twist Hubby’s arm to get him to do most of the work with this recipe. This is him enthusiastically watching a You Tube video about making a roux: 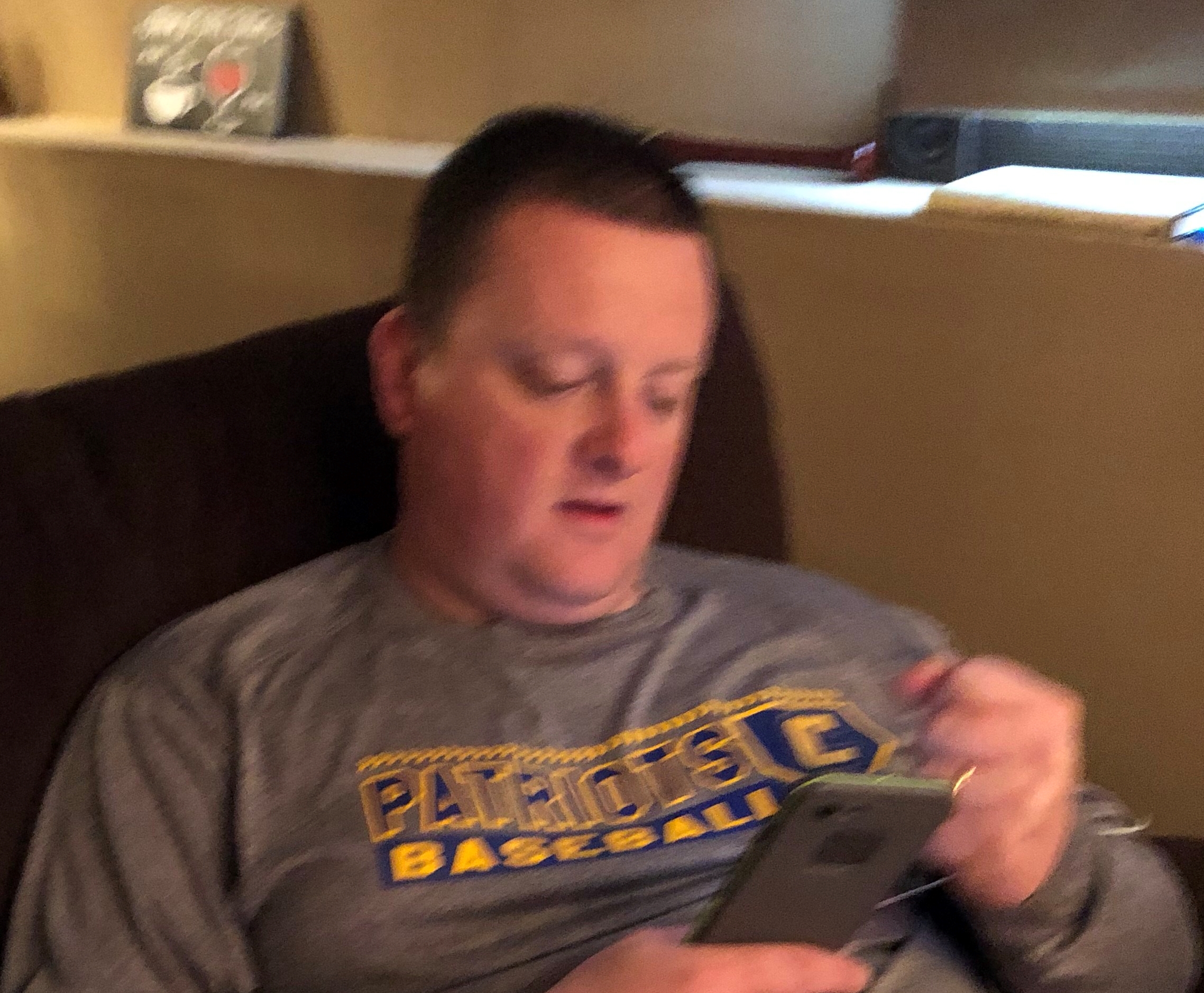 While the idea of stirring a pot of flour and oil for an hour overwhelmed me, it excited him. Weirdo.

Anyway…on to the roux. Apparently another difference between Cajun and Creole is the way the roux is made—Creole uses butter, Cajun, uses vegetable oil. You need to heat it over low heat and stir in the flour it until it turns a chocolate brown color. It LITERALLY needs to be stirred CONTINUOUSLY for an hour. Like you can’t do anything else at all. Because you’ll burn the roux and then you’ll have to start over. Seriously…you can’t even scratch your nose.

Hubby set up the roux and we took turns stirring it—I had to stir while he chopped up the onions, pepper, and celery for the gumbo. If there’s anything I dislike more than stirring a roux, it’s chopping up onions. (Really, how do people do it without crying?) He stirred while I used the garlic press to squeeze and entire bulb of garlic in order to get the 3 TABLESPOONS of garlic. And then I wondered why my hands were sore the next day.

Here is our roux in stages:

See the chocolate color in the last picture? Hubby was practically swooning when he saw that. These were taken at 10 min intervals—it turns out that we only had to stir for about 40 minutes because we had 1 cup of flour and oil instead of 2.

If you ever want to make this recipe, I would highly suggest watching one of those roux making You Tube videos to help you out.

The roux was the most difficult part of the whole recipe. I’m glad Hubs did most of that because I probably would have had a nervous breakdown worrying about messing it up. Now that I know how to do it, I would feel comfortable doing it on my own. The only problem would be if I had to go to the bathroom. I guess I can’t drink any water before making a roux by myself.

Once the roux was the right color, the veggies, garlic, sausage, and cayenne pepper were added and cooked while stirring for about 5 minutes until the veggies were soft. The chicken stock was added directly to this pot, along with salt, pepper, and a bay leaf. Then the pot was reduced to a simmer for about 2 hours. (During that time you have to check the pot to skim the excess oil off the top every once in awhile.)

After that, we added shrimp*, green onions (yuck), and parsley to the pot and allowed it to simmer until the shrimp was cooked, about 20 minutes. We served it over rice with a sprinkle of file powder**.

*Shrimp was a deviation from the original recipe—Cajun cooking more commonly includes Crawfish, while Creole tends to use shrimp. Crawfish is a little harder to come by around these parts.

**This was fun to find. Two different grocery stores on a Sunday afternoon in search of a tiny little bottle of powder. When I told Hubby that the powder was an optional garnish, he didn’t seem to care and still insisted on having it. Ugh.