Skip to content
The Bad Mommy Cooks the USA
By Badmommy April 22, 2018April 17, 2019
FYI...my posts may contain affiliate links. This means that if you click on those links and make a purchase, I will receive a small commission at no cost to you. And those commissions are what makes it possible for me to blog. Thank you!

I cringed last week as Hubby pulled another middle of the country state. To me, Nebraska was equivalent to farmers, football, and amber waves of grain. I would have never dreamed that one of my favorite foods actually originated in Nebraska. The Reuben Sandwich.

Reuben Kulakofsky, a Jewish grocer from Omaha, Nebraska is credited with inventing a sandwich for his weekly poker game at the Blackstone Hotel sometime in 1920. The owner of the hotel was so impressed with this sandwich, he put on the hotel menu.

According to sources like Wikipedia, that sandwich was the first Reuben sandwich, born not out of New York or New Jersey as one would expect, but out of a hotel in Nebraska. Nebraska! Nebraska-ians (?) love their Reubens. In fact, March 14 isn’t just Pi Day in Omaha—it’s Reuben sandwich day.

Or, It Could Have Happened This Way…

Unfortunately, no one knows if that story is completely true because there are many other “Reuben” sandwich origin stories, including one that claims the Reuben originated from a deli in New York City called Reuben’s Delicatessen. Supposedly, it included “Reuben’s Special” on its menu as early as 1914. The earliest references to the sandwich in print are from the mid-20s and are New York based. There’s also speculation to whether the sandwich was invented for an actress or something just whipped up by the cook. So, not so clear.

What’s Even Less Clear is What’s on the Sandwich

The “classic” Reuben has corned beef, Swiss cheese, sauerkraut, and Thousand Island dressing on rye bread. There are many variations on this recipe, including pastrami in substitution of the corned beef (Hubby and I argued about this one—they’re PRACTICALLY the same thing), Russian dressing or mustard in lieu of the Thousand Island, and coleslaw instead of sauerkraut.

Some people even use turkey instead of corned beef or pastrami. Anyway you slice it, people call this sloppy sandwich a Reuben. (In NJ sometimes a similar sandwich is called a “Sloppy Joe”—turkey, roast beef, coleslaw and Thousand Island dressing.)

Any way you slice it, the point is, Reubens are really popular in Nebraska, so that’s what we had for our Nebraska meal. There was a collection of groans when I announced this fact. (Notice that no one else does the state research so I ALWAYS have to be the person who picks and I ALWAYS have to deal with the moaning and groaning from the members of my family who are unhappy with my decision.)

But I ignored them. I like Reubens. Child #2 likes them, too. She gets a Reuben panini whenever we get subs. TFB if Hubby and Child #1 aren’t fans. After our very labor intensive Louisiana meal, a Reuben sandwich that could be whipped up on a busy weeknight was perfect.

The only way I could get Hubs to agree to eat a Reuben was to let him make it with pastrami. *Sigh* Although corned beef and pastrami taste almost exactly the same, a Reuben with pastrami is actually called a “Rachel”.

But whatever. Let him eat the pastrami. At least he was trying something new. Warm up the meat on the griddle while the sauerkraut warms up in a pot on the stove: 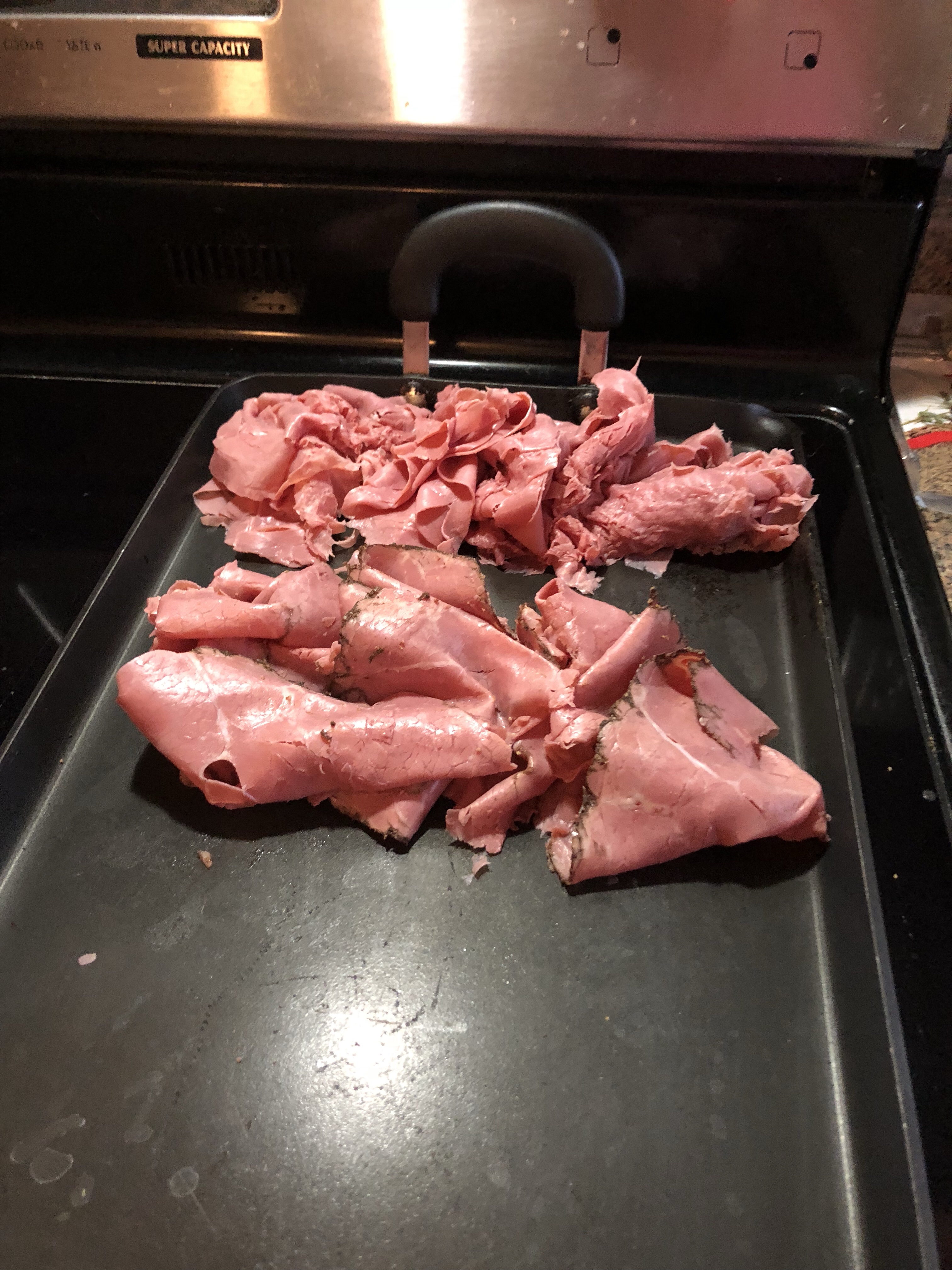 You butter the rye bread* and toast the one side and put Thousand Island dressing on the other: *Seedless rye—Rye bread with seeds is the devil. I hate biting into one of those seeds. Yuck. Whenever I got a Reuben in a diner, I would order it on a roll because I hated the seeds. Until I discovered seedless rye…GAME CHANGER! 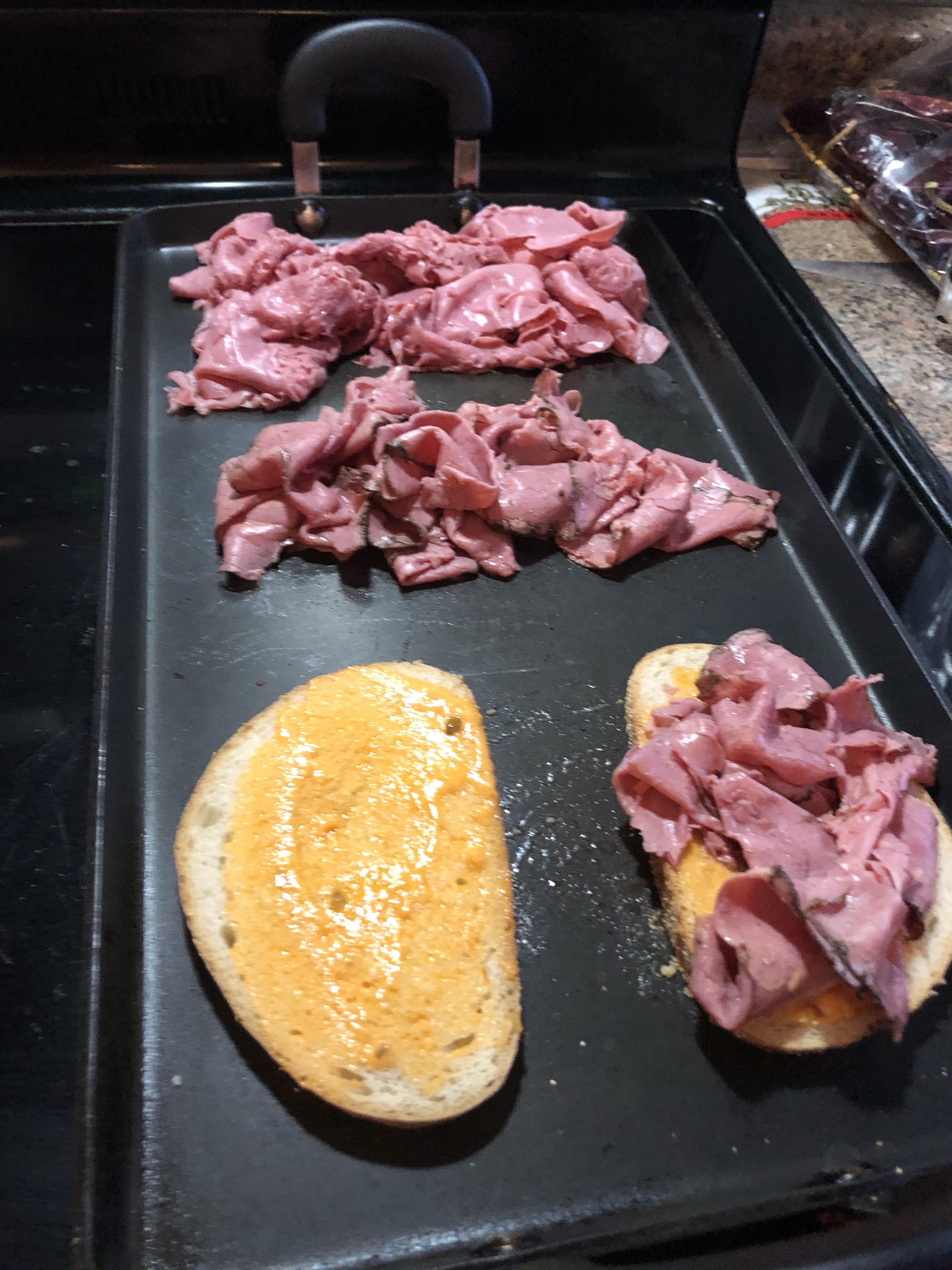 Then top with the meat, Swiss cheese, and sauerkraut: 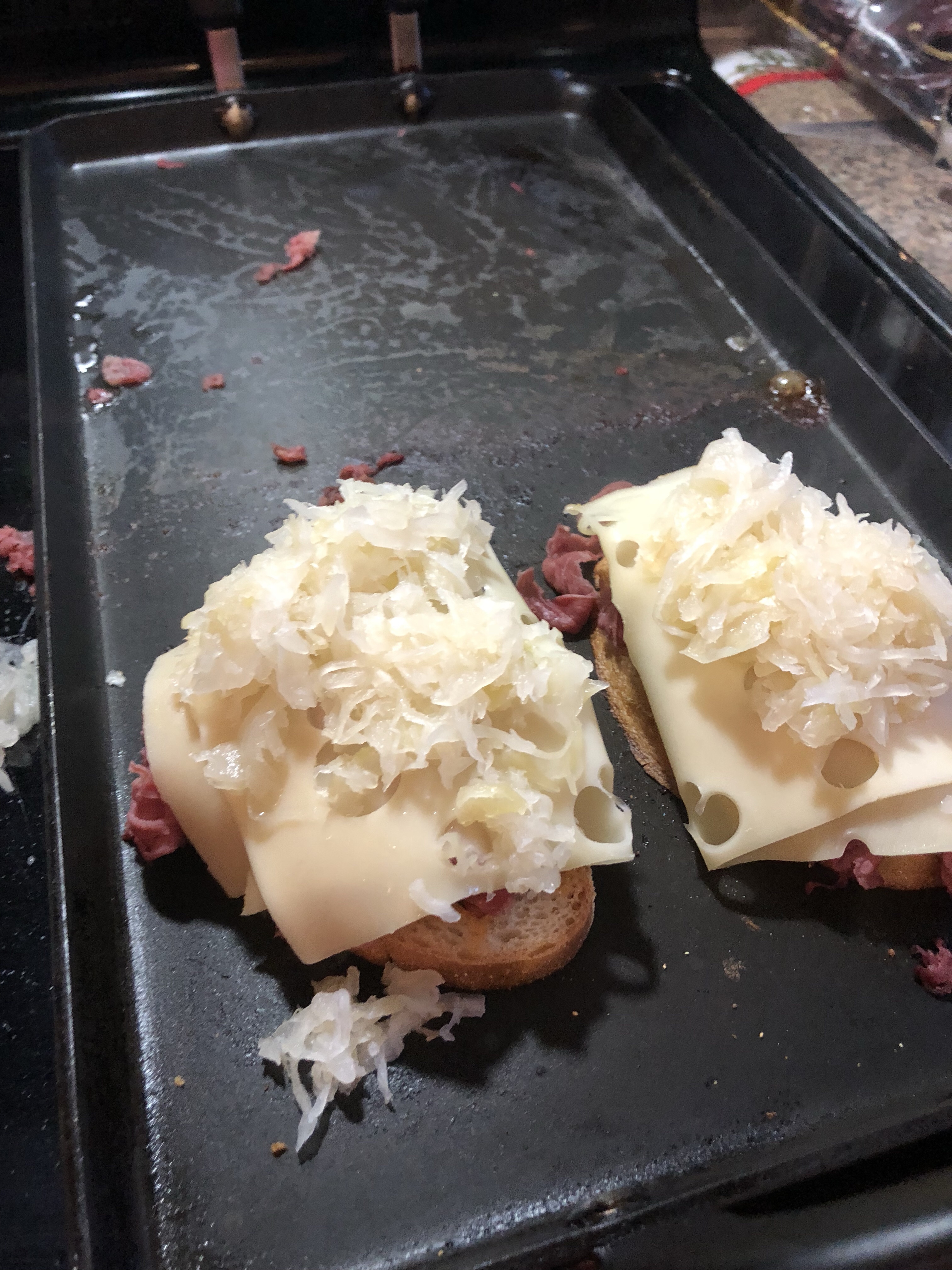 Cover with a second piece of toasted bread (with Thousand Island dressing spread on the one side). Grill both sides like you would for grilled cheese. Serve when cheese is melted and meat is warmed throughout: 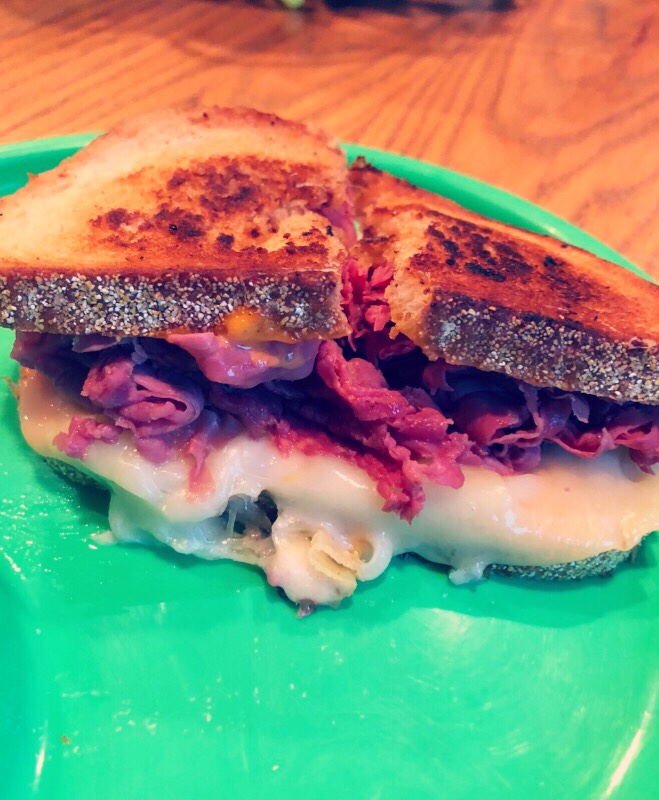 While the sandwich was messy as it always is, I added less meat than they would in a diner or deli, so it was more manageable. The sandwich was delicious and I enjoyed it. Child #2 was pleased with it as well.

The other two grumbled, but ate the sandwich because they knew they weren’t getting anything else to eat for dinner. I would definitely make a homemade Reuben again in the future…just maybe not when the Reuben-haters are home.