Skip to content
The Bad Mommy Cooks the USA
By Badmommy October 15, 2017April 18, 2019
FYI...my posts may contain affiliate links. This means that if you click on those links and make a purchase, I will receive a small commission at no cost to you. And those commissions are what makes it possible for me to blog. Thank you!

I have a confession—we didn’t actually pull New Mexico out of the hat. Please don’t stone me for not sticking to the rules like my daughter wanted to. The thing was, I found some Game Day Recipes on Pinterest—damn Pinterest sucks me in like the ringing of slot machines suck in a gambler.

I saw a recipe for “Pork Taquitos”, something we had never had, but made from…yup, pulled pork. Have I mentioned I love pulled pork?

Anyway, I decided to make the taquitos and at the same time, I realized we hadn’t made any “state” food this week. So I looked it up and low and behold, taquitos are part of New Mexico’s cuisine :). Awesome sauce. Two birds, one stone. As I’ve said before, I’m kind of an expert with all thinks involving pulled pork (we can just forget about the disastrous Hawaii meal, right?), so I was definitely hoping to add a plus in my scoring column.

The Steps to Making Pork Taquitos Are a Little Intense

The only thing I wasn’t anticipating was how utterly time consuming the endeavor of making pork taquitos would actually be. The steps take you through making pulled pork, and THEN making carnitas, and THEN making the taquitos from that. And they have the nerve to classify it as a “Fast” food.

I’m not kidding—for a “fast” food, this was a very involved recipe, from making the wet rub all the way to pulling the pork and tossing it in the homemade BBQ sauce. This recipe also included a yummy homemade chipotle ranch dipping sauce which I caught my son spooning directly into his mouth.

And the Flavor is Even More Intense

So my husband’s biggest complaint when I cook is that the food doesn’t have enough flavor. Well, with a wet rub consisting of garlic powder, onion powder, cumin, liquid smoke, smoked paprika, chili powder and brown sugar, and topped with a sauce made from orange juice, lime juice, jalapenos, and onions, there was no way this pork could be anything but bursting with flavor.

And the house smelled AMAZING. The BBQ sauce started out as a store brought bottle sauce. I then mixed it with cream cheese, sour cream and cheddar cheese—are you drooling yet? I was. In fact, I sampled so much during the prep process that I could only eat one whole taquito. I did have a leftover taquito the next day for lunch and it was just as delicious.

The Pork Was So Easy to Pull

Because the pork needed to be seared before putting it in the crock pot, I think it led to the pork literally falling off the bone in the crock pot. (I used a pork shoulder). There was actually no “pulling” involved. That delighted me to no end because I usually end up burning the crap out of my finger pads trying to pull the pork. Never again will I suffer for my craft—searing all the way!

All the members of the family also were surprised at how good this meal was. Initially they were turning their noses up at the idea). Here’s a picture, although it does not do the flavor of this meal any justice. You’ll just have to make it for yourself to experience that. 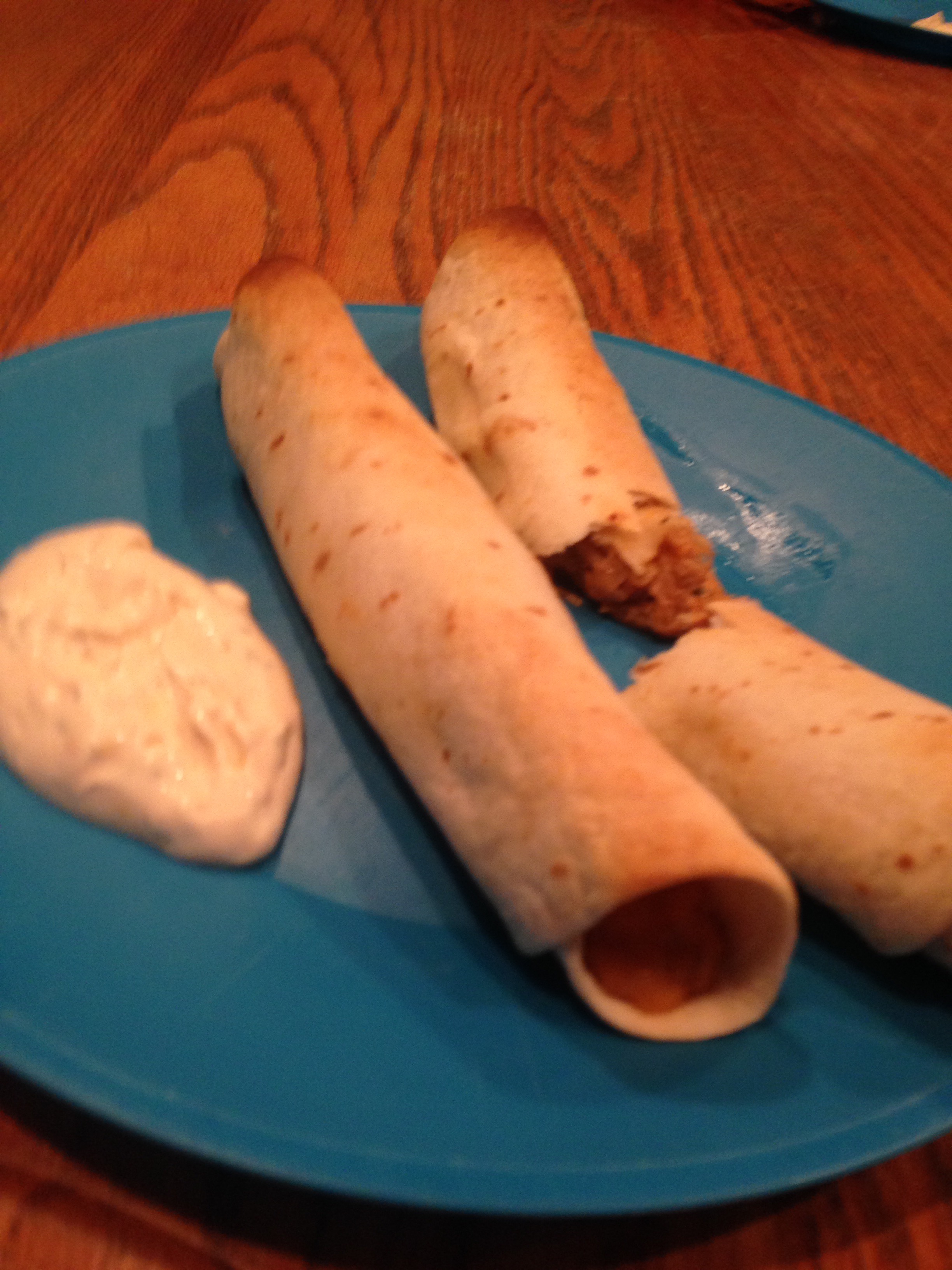