Skip to content
The Bad Mommy Cooks the USA
By Badmommy September 4, 2017April 18, 2019
FYI...my posts may contain affiliate links. This means that if you click on those links and make a purchase, I will receive a small commission at no cost to you. And those commissions are what makes it possible for me to blog. Thank you!

At the end of July, we were eating dinner and my daughter came up with this brilliant idea that for our next Family Food Challenge, we should cook a meal from each of the fifty states over the course of a year (50 states, 52 weeks…a coincidence???).

So we scoured the internet and asked for advice from Facebook in order to compile a list of meals from all 50 states. And now it’s September and we are finally getting to our first meal.

There are a couple of reasons for the delay, and most of them have to do with my family’s picky nature. When we organized the list, we discovered Alabama was first alphabetically. Not much of a shocker there, but the fact that we had fried catfish as the “Alabama” meal, caused my family’s fur to prickle. In our house, salmon is about the only fish that makes it through our front door.

Upon the “Catfish discovery”, the children (and hubby) made various gagging noises and raised complaints. I still didn’t budge. When hubby said our local grocery store wouldn’t have catfish, I proved him wrong. I came home with catfish. A victory? Nope.

That catfish literally sat in our fridge for 9 days before I acquiesced and sent it on its way to the giant garbage can in the sky. Every single day that I had planned to make the catfish, something mysteriously came up…doctor’s appointments, birthday parties, late afternoons at the beach…

Our Food Challenge was stalled for almost two weeks simply over catfish. I told them resistance was futile—we had to have catfish to start.

Then the brilliant child came up with a plan to get around the catfish (for now). She wrote down all the states and put them in a hat. We waited with bated breath to see what she would draw out of the hat. Luckily, she pulled out good one…Hawaii. 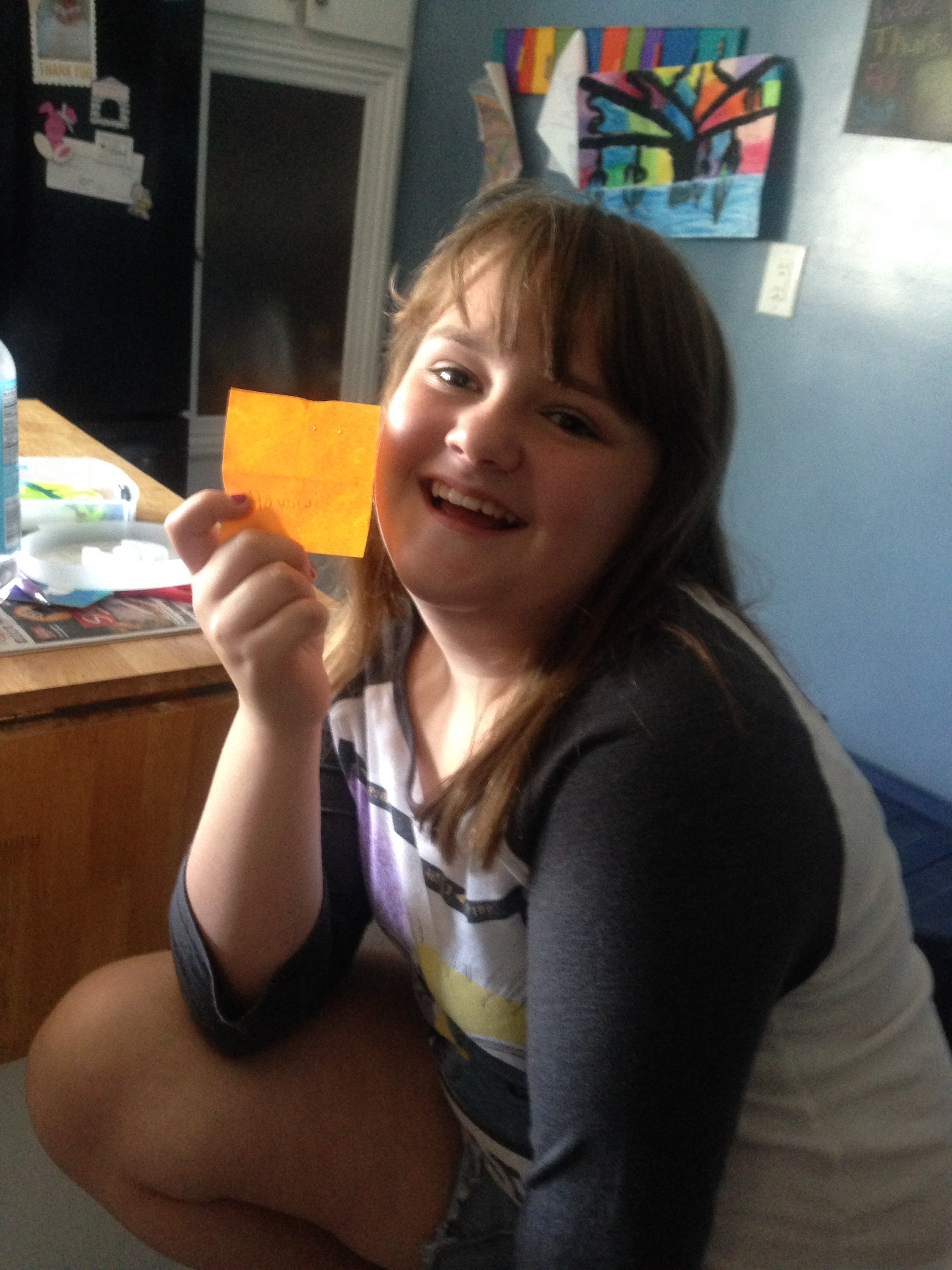 Hawaii was initially “Spam”, but with a little research, I found a recipe for Kulua Pig. This called for a pig roasted over a spit…not happening, but there was a “cheat” recipe where you could make it in the oven. Winner, winner, chicken, er, pig dinner! (There was also a crock pot recipe but that was too close to my normal pulled pork recipe…this experiment is about trying new things.)

Everyone was satisfied with the choice. You would think that would have meant we had the Kulua Pig the next day, right? Wrong. You obviously don’t understand how my family works and how difficult dinner really is in our house.

First, it was finding the right cut and size. The recipe fed 20. My kids eat a lot, but not even my teenager can eat for 20. So I got a smaller cut (keep this in mind, it is relevant later).

Then the pork butt sat in my fridge for 5 days while life got in the way. Since the recipe said the pork needed to cook for 4 hours and change, we had to make it on a day when we would be home all afternoon. That’s not an easy feat. The pork butt went into the freezer.

A few days later, the pork butt came out of the freezer and I tried again. Wednesday we were supposed to have the pork butt. I had to work and forgot to tell the hubby to put it in the oven—pork butt sat in the fridge and we went to Chili’s.

Thursday, hubby worked and it’s not worth it to cook elaborate meals for just the kids—pork butt sat in the fridge.

Friday, we had lunch too late and no one felt like eating dinner—pork butt sat in the fridge.

Saturday I threatened to cut the WiFi if we did not have the Damn Kulua Pig because it was going to have to get thrown out if we didn’t eat it tonight!!!!

Hubby then informed me of a BBQ that he forgot to write on the calendar. (He claims he TOLD me about it but he did not, and if it’s not on the calendar it doesn’t happen.) I threatened his manhood if he didn’t come home to eat the Damn Kulua Pig. He promised he would be home as he sheepishly bowed out.

As I was gathering the ingredients, I realized I read the recipe wrong (the font on my phone seems to be shrinking…). I needed banana LEAVES to wrap the Damn Kulua Pig in. Yeah, I don’t have banana leaves, nor do I have any idea where to get them—actual bananas were going to have to do.

But of course, when I cook, ONE problem isn’t enough. Remember I got a smaller cut of pork? Well after hubby rubbed it with sea salt and liquid smoke and as I was preparing to put it in the oven, I realized that crap…it wouldn’t need a whole 4 hours to cooks. But then, our oven is messed up—sometimes it’s off by 50 degrees in either direction so it’s a game to figure out how long stuff will take to cook to begin with—so I wasn’t sure what to do.

Should I cut everything by half, temp AND time wise? Math is not my strong suit, so soon, the only smoke was coming from my ears. So I stuck it in the oven and crossed my fingers, hoping for the best. At 2 hours in, I realized I burnt the bananas.​

I kicked the oven up a few hundred notches and proceeded to dry the whole thing out within minutes.

Hubby made a face and said he was going back to the BBQ for “Real food”. Children turned up their noses at the pork and followed their father out the door with promises of “Real food”. This is me…eating all by my lonesome: 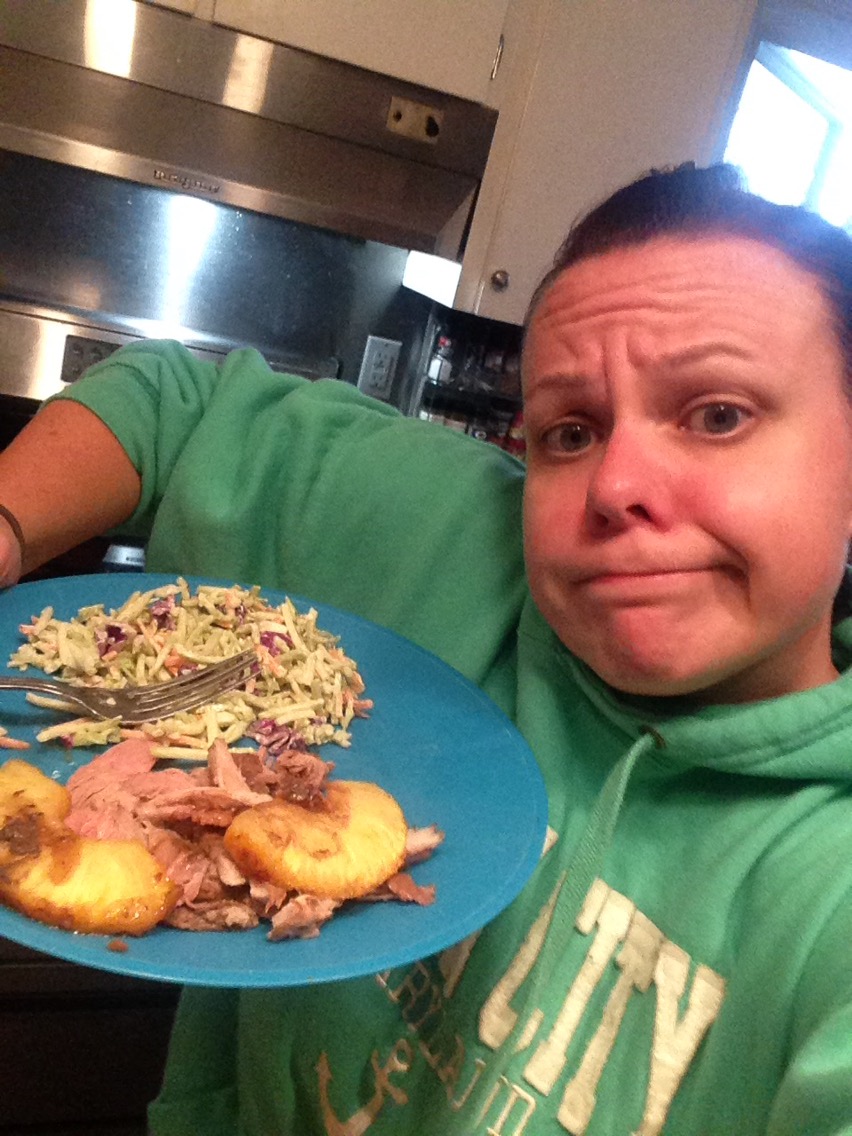