Skip to content
The Bad Mommy Cooks
By Badmommy October 4, 2018April 16, 2019
FYI...my posts may contain affiliate links. This means that if you click on those links and make a purchase, I will receive a small commission at no cost to you. And those commissions are what makes it possible for me to blog. Thank you!

Today is National Taco Day, a day I can certainly get behind! Who doesn’t love a good taco? It doesn’t matter what your food preference is, tacos have it all. Crispy shells or soft tortillas, ground beef or chicken, cheese or sour cream…there is no wrong way to eat a taco. In honor of this momentous holiday, I made shrimp tacos and I’m going to share the recipe with you! Aren’t you lucky?

But honestly, these shrimp tacos were soooooooo easy and even more delicious than they were easy…if that’s humanly possible. They’re no problem to whip up on a weeknight, even if you’re pressed for time.

If you really only have a few minutes, make the avocado sauce beforehand (it’ll keep nicely in the fridge for quite a few days…and tastes great on salad if you have any leftover!) and it will seriously only take you about five minutes to make the shrimp tacos.

The key is the Avocado Cilantro Lime Sauce.

Avocados are amazing—besides all the great health benefits from avocados, they taste delicious and can be incorporated into so many different recipes. I could probably do blogs just on avocado recipes. The crazy part is, I never even had an avocado until about 4 or 5 years ago when Hubby took this cooking class and they made homemade guacamole. I had never even had guac at this point in time—I know, crazy!

But guacamole includes a whole lot of ingredients that I’m not a fan of. (Like onions.) Yet, when they’re all nicely blended together in this amazing guac, I don’t even taste those things that I don’t like.

Anyway, off on a tangent as usual…

The avocado lime cilantro sauce is really tasty (and I’m not a cilantro fan at all). It’s incredibly simple to make—just toss the avocados, milk, Greek yogurt, jalepeno, cilantro, and lime juice in the blender and blend for a minute until smooth. I tossed everything in my Ninja, which I HIGHLY recommend. I like it so much better than any other blender I’ve had in the past—no chunks or unblended pieces.

The Coleslaw Adds a Delightful Crunch

You can chop up the cabbage for the slaw in no time. I used my Pampered Chef chopper for this task. The chopper is seriously one of my favorite tools because I can chop up anything from apples to onions (so I don’t have to touch them). I used it for the mango as well.

Look how beautiful that slaw is! Add some cilantro and a drizzle of lime juice to the slaw to give it a little more flavor.

Throw the Shrimp in a Skillet and BAM…Dinner is Done

Take the tails and shells off the shrimp and dump them in a bowl. Season them with chili powder, cayenne pepper, cumin, salt, and pepper and toss until coated. Heat oil in the skillet and cook shrimp.

When shrimp is cooked, squeeze some lime juice over the top and call in the family to assemble their own tacos. (Many recipes will give you “instructions” to assemble the tacos, but like I said earlier…there’s no wrong way to eat a taco.)

Let everyone put together their own shrimp tacos. Plus, you cooked the meal…let them do a little work, too. 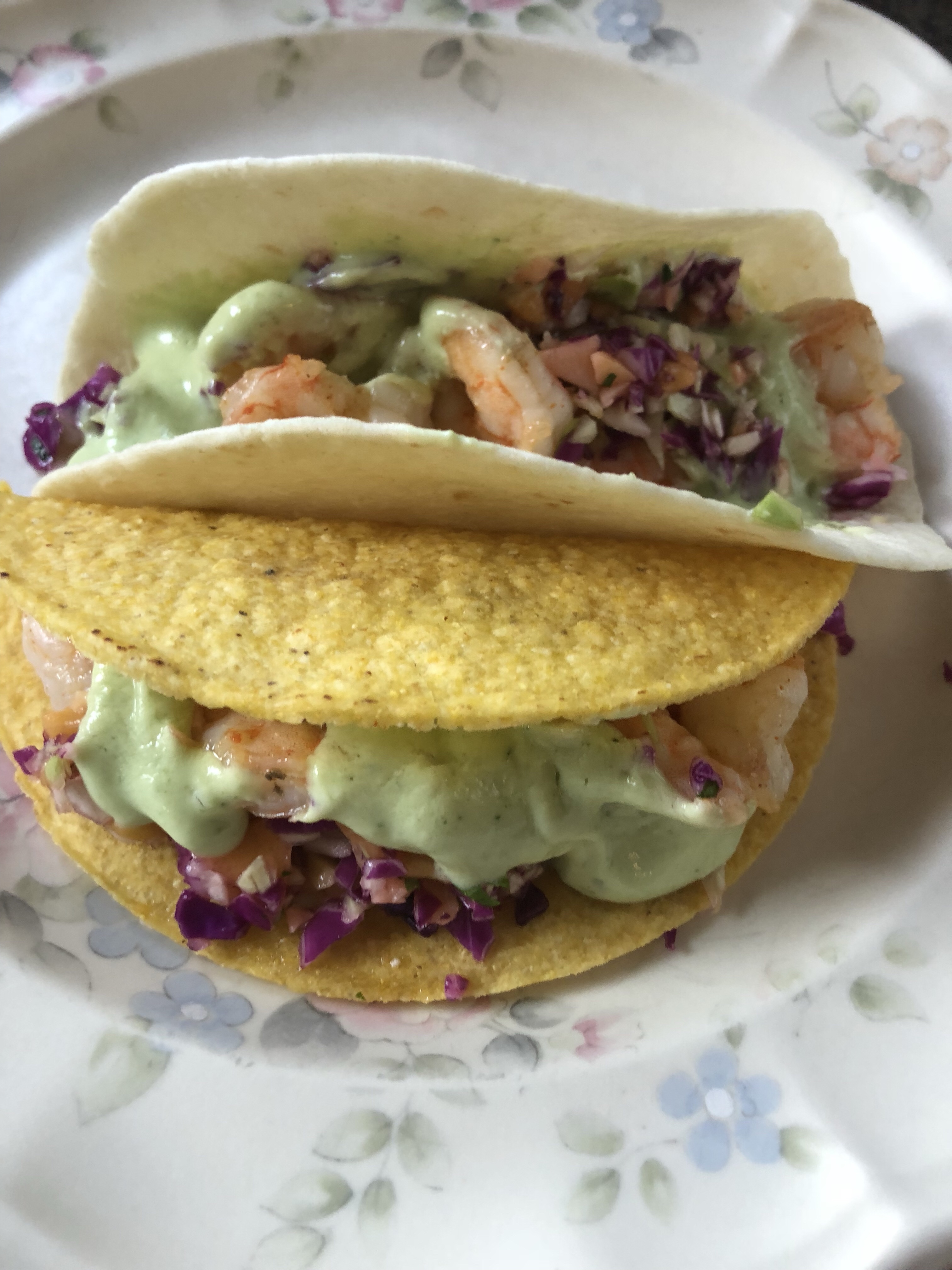