Skip to content
The Bad Mommy Cooks the USA
By Badmommy January 7, 2018April 18, 2019
FYI...my posts may contain affiliate links. This means that if you click on those links and make a purchase, I will receive a small commission at no cost to you. And those commissions are what makes it possible for me to blog. Thank you!

“Are you from Tennessee? Cuz you’re the only Ten I See.” Cue the cheesy laugh track.

Hubby taught my son this pick up line when he was like 8 or something ridiculous like that. Actually, I don’t know what’s more ridiculous…an 8 year old with a pick up line or a grown man who’s never used one in his life teaching it to him.

Anyhoo, we pulled Tennessee out of the hat so I braced myself for the onslaught of Ten I See jokes from the fam. They did not disappoint. Insert eyeroll here. They really need some new material.

They did not disappoint me with their predictability and therefore I didn’t disappoint them with mine. Yup. After a good meal or two from me, old Bad Mommy cook was back. I had a lot of trouble with this one. *Sigh*

I think it’s because I try too hard. I know that doesn’t seem to make sense, but neither does the fact that a woman who has been cooking for over 20 years can’t seem to get more consistent with her meals.

By “trying too hard” I mean that I don’t just take the easy way out and I end up setting myself up for failure almost every time.

Case in point…the Tennessee meal. Tennessee is known for BBQ and of Jack Daniels. (Side note: Jack Daniels is made in Lynchburg. Which I didn’t know. Which is why hubby laughed at me for five minutes straight when I said “Ooooo, now I know why they call it Lynchburg lemonade”.)

So what would one do to represent the beautiful state of Tennessee? Combine the two, of course. Ribs with Jack Daniel’s BBQ sauce. Sounds delicious, right? Who can resist ribs? Certainly not my family. And I can’t resist the urge to make this even more difficult on myself.

Just ribs aren’t a meal, right? You have to have a side! How about I add the most complicated side that I’ve never made before and will never make again, Onion Rings.

How was I to know this awesome storm would make it impossible to cook on the grill and I would have to make this in the craptastic oven instead?

I know what you’re thinking: “How hard can it be? You have a fryer for the onion rings and geez…the ribs cook themselves! You’d have to be an idiot to mess this up! You’ve got this!” Right?

Obviously you don’t know me very well. Or…I’m just an idiot because this meal caused a mental breakdown. By the time hubby came home from shoveling, I was crying and flinging spatulas at the wall (don’t remember what I was using the spatula for, though—that could be part of the problem).

And before you ask, no, I hadn’t been sampling the Jack Daniels, although afterward I wanted to pour the whole damn bottle down my gullet.

I started out okay. I prepared a time line in my head. I rub some spices the ribs, soak them in the Jack and apple juice, and pop them in our horrible oven. (I asked for a new oven again yesterday—Scrooge McDuck denied me again.) 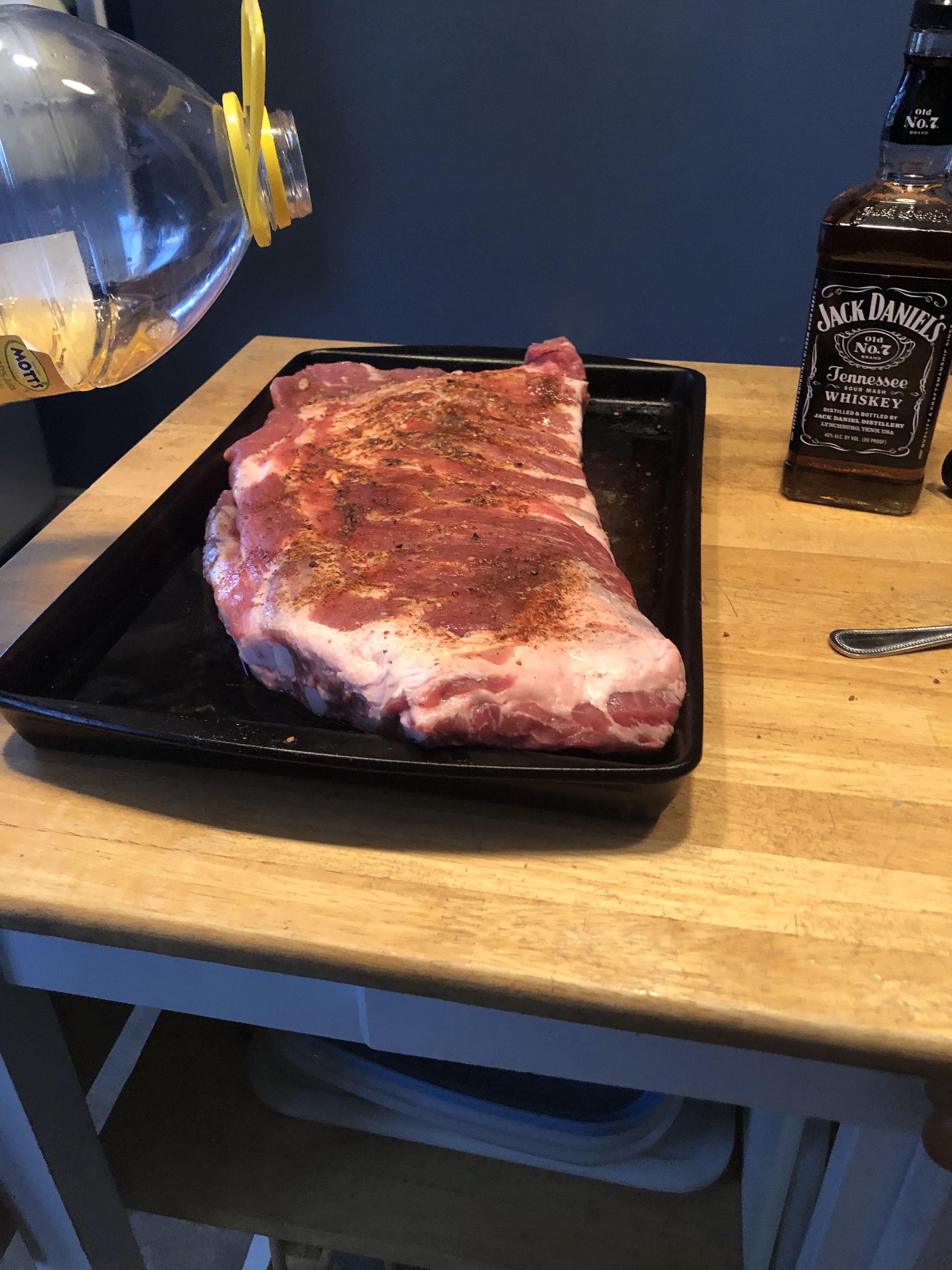 Then I would heat the oil when I was halfway through breading the onion rings. I would make the BBQ sauce after the onion rings were done being breaded. I’d take the ribs out, baste them with the sauce, pop them back in, make the onion rings and everything would be ready at the same time. Easy peasy lemon squeezy, right? WRONG.

First off, do any of you know how long it actually takes to bread the rings from ONE FRICKING ONION (while trying not to actually touch the onion with your fingers?)??? I think I could have watched the entire Godfather trilogy in the time it took me to do that. 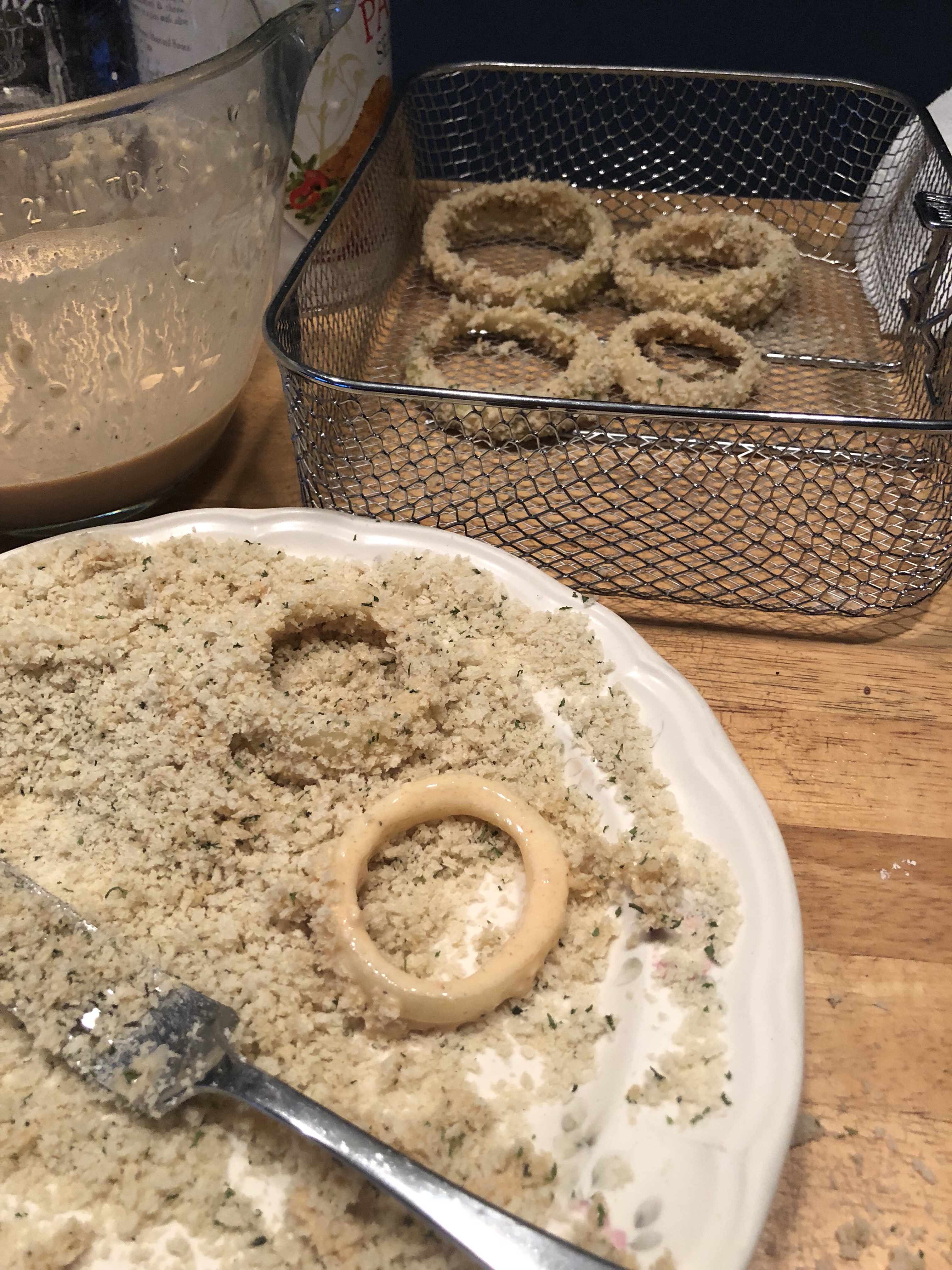 Meanwhile, I was trying to heat the oil in the fryer, but because of Christmas Eve, we had minimal oil left…like not even enough to get to the minimum line. I was all alone cooking this meal. I couldn’t run out to the store for more oil and chances were, stores would be closed because of the stupid Bomb Cyclone nonsense.

The onion prepping literally had me in tears. I’ve heard onions do that, but I seriously hate onions with such a passion that I’ve never really cut them up so I haven’t been privy to this experience before. Why are you making onion rings then, you ask? Good question. It’s for my loving family who truly does not appreciate the culinary sacrifices I make for them.

Meanwhile, I was trying to make the BBQ sauce when I realized that the sauce required 3 tablespoons of bacon grease. Yes, you read that correctly. BACON GREASE. Guess what I needed to do? Yup, make bacon in the middle of this already greasy and messy debacle.

And how much bacon does one need to make to yield 3 tablespoons of grease? Is it 1 tablespoon per strip? I had no idea, so I just stuck 4 strips in the microwave to be done with it. I think I got a few tablespoon fulls—I didn’t really measure. Accuracy is only important in baking, right?

So the ribs are now taking twice as long as they should because of the craptastic oven, which was a blessing in disguise because I would have had my nervous breakdown loooong before hubby came home to discover the lack of oil in the fryer, the fact that the ketchup in the BBQ sauce had clumped together because I hadn’t “whisked” hard enough (whatever THAT means)  and oh, the fact that I hadn’t even put the fryer together correctly.

He offered to take oven the frying and I believe I accused of him of being a saboteur to all my cooking efforts and cursed him off. This is the part where I also flung spatulas. Sorry honey.

Somehow…and I still don’t know how this happened, the ribs turned out okay. I also heard the onion rings turned out pretty good as well, but since onions are the devil, I don’t know anything about that.

And of course hubby had to tell me how I could have made the meal better, which I never appreciate (I’m not looking for constructive criticism here, pal).

The bbq sauce was very tasty, and I’d highly recommend it (Get recipe here.) In fact, I’m planning to use it on wings tonight. And if you can’t find any meat to put it on, it works well right off the spoon…not that I did that or anything. 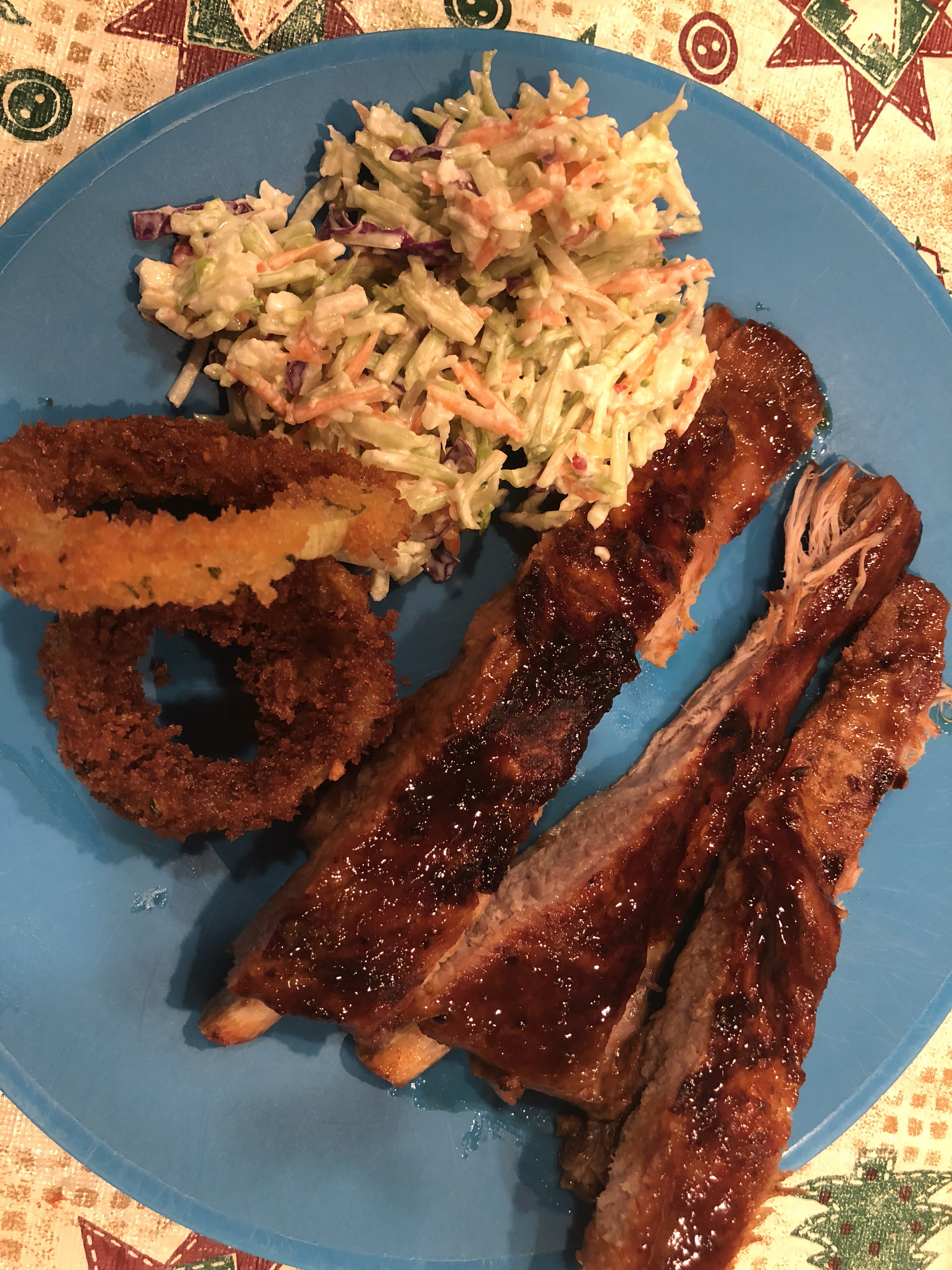