Skip to content
The Bad Mommy Cooks
By Badmommy May 28, 2018April 17, 2019
FYI...my posts may contain affiliate links. This means that if you click on those links and make a purchase, I will receive a small commission at no cost to you. And those commissions are what makes it possible for me to blog. Thank you!

Well, I hate to admit it, but we haven’t cooked a meal in two weeks It’s been night after night of take-out, restaurants, cereal for dinner, and even a night or two where we completely forgot to eat dinner. Welcome to baseball season at our house—the season of never knowing when we will be home for dinner!

The first few years my son played baseball I seriously tried to organize meals, but games would get rescheduled, rained out, and rescheduled again…always at the last minute. Some games would last an hour, while others would go three hours. I finally gave up trying to feed my family sometime in his sophomore year of high school. We just never seem to have time to pull together a meal.

Which is why I love this Steam Pot meal. While it’s not actually a Steam Pot, that’s what the kids call it when I make this particular dish.

When we go to seafood restaurants, we all like the Steam Pot meals with the shrimp, sausage, corn and crab legs. They’re so easy and quick to recreate at home. The best part is you don’t even need the pots— The dish consists of uncooked shrimp, Andouille sausage, corn, and red skin potatoes.

You basically cut the potatoes and sausage into cubes, quarter the corn, defrost the shrimp, dump them all on a sheet of heavy duty foil, season with Old Bay, and top with several TBSP of butter for good measure. That’s it.

Since the sausage is precooked, you don’t even have to precook anything…although I would recommend sticking the potatoes in the microwave for about 5 minutes before you cut them up and add to the foil since they tend to come out too hard if you skip this step. 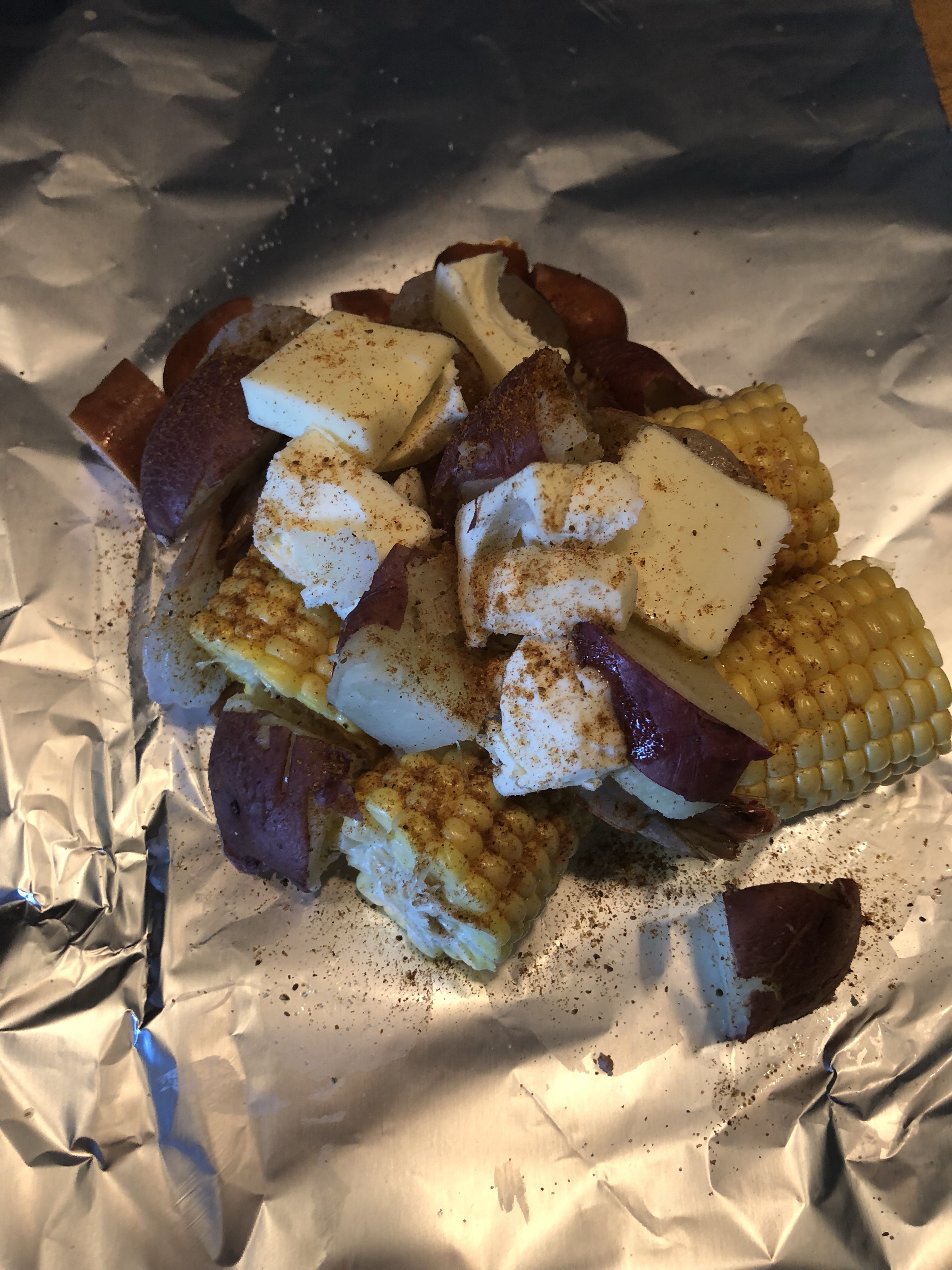 We didn’t have crab legs this time, but you can easily add them to the mix. (Make sure you use the heavy foil since the crab legs tend to rip through.) We had a little disagreement about how long the foil packets should stay on the grill. I took them off after 10 minutes (5 minutes on each side) because I ended up spilling part of the packet. I forgot to make sure to close the foil on the SIDE, not the top or bottom, when I wrapped them. This may cause the packet to open up if you flip it over on the grill too rapidly. 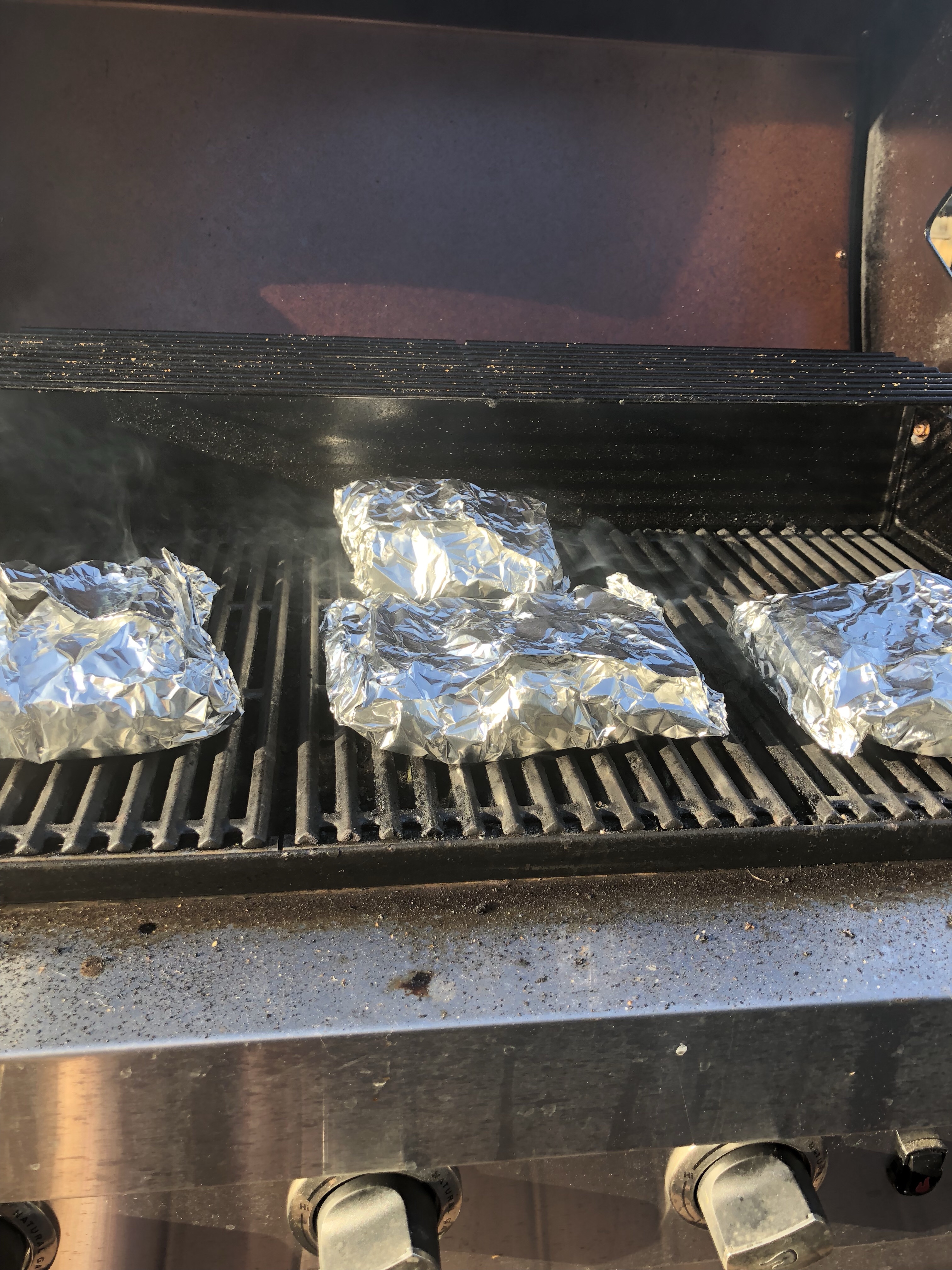 See? I should have put them on the side. Since I didn’t, one of the packets opened up and I had to rewrap it and the grill started smoking because of the butter dripping and I got frustrated and nervous about all the smoke and took all the packets off the grill even though they weren’t done. (I’m sure you’re elated to know I can mess up even the simplest of meals.)

Anyhoo, they went back on the grill for another five minutes or so and they turned out perfect in the end: 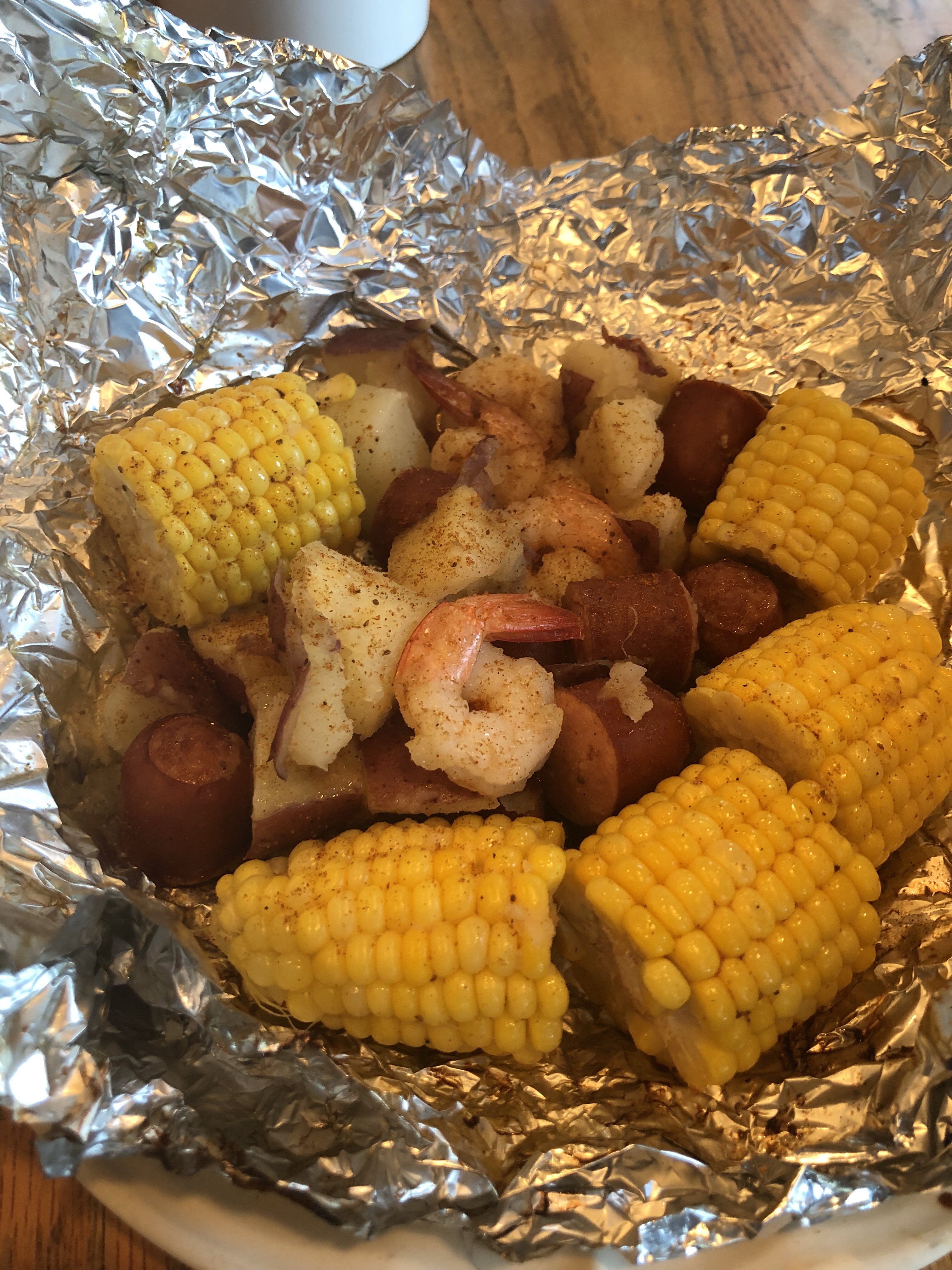 There were no leftovers…next time I will make a 5th packet so that we can all have some extras. I’m sure you can wrap each item up individually and cook it as well, but I think the flavor created from mixing everything together is part of this dish’s charm.

So if you’re short on time this grill season, whip up a couple steampots for your family. It’s quick and so easy that even I can do it.