Skip to content
The Bad Mommy Cooks the USA
By Badmommy June 3, 2018April 17, 2019
FYI...my posts may contain affiliate links. This means that if you click on those links and make a purchase, I will receive a small commission at no cost to you. And those commissions are what makes it possible for me to blog. Thank you!

While not the first official state (that’s Delaware), Virginia was the first colony and the site of the first English settlement, Jamestown, in 1607. (That’s the settlement that didn’t disappear, by the way.)

In fact, in 1584 the Queen at the time gave the name “Virginia” to all the land being explored by Sir Walter Raleigh. This land actually stretched from present day Maine all the way down to South Carolina. The beginnings of America started in Virginia and therefore, our Virginia meal reflected that.

It really wasn’t difficult to choose the components of this state meal. Of course we had to make Virginia ham—the state’s name is in the food for crying out loud! But what to make with it that screamed “Americana”???? None other than mashed potatoes, broccoli, and Apple pie. Is there anything more American than apple pie?

We had a ham in our freezer that has probably been there since last Easter. Our supermarket gives us gifts like a “free” ham or turkey at holiday times after we spend a certain amount in the store. I think it’s something like five million dollars—steep, but somehow we seem to earn the “free” meat product every time. (They used to give us 10, 20, or 30% off coupons…man, I miss those days…instead now I get an 11 pound ham 🙄.)

Eleven pounds of ham is a bit much for three people (yup, Mister Picky Teenage Boy who is living on McDonald’s and Coco Puffs will not eat ham) so you can understand my reluctance to make it the ham before pulling Virginia out of the hat.

Oh, by the way, my daughter wrote out the states back in August and until we pulled “Virginia” we didn’t know that she had spelled it completely wrong…yup…we pulled “the state of female anatomy” out of the hat. Cue inappropriate jokes from Hubby. 🤦🏻‍♀️

Hubby also refused to help me cook this ham. I’ve never made a ham and the sheer size of it terrified me. Go ahead, make your own inappropriate jokes…I’ll wait. 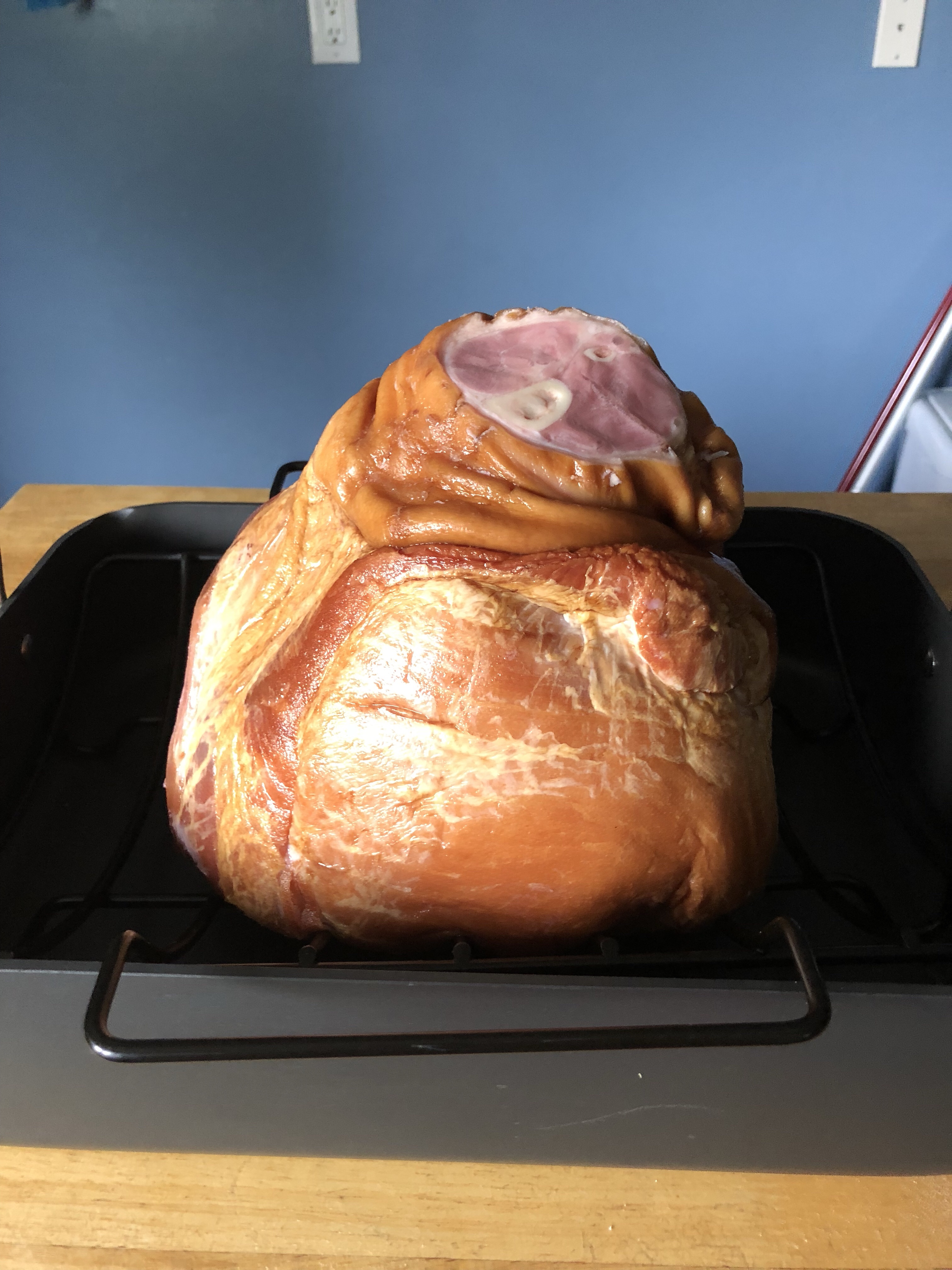 Of course I had to google how to make the stupid thing and I panicked when I realized I didn’t have anything to make a glaze. Until I discovered a bottle of Pampered Chef Pineapple Rum glaze in the cabinet that was even older than the ham. The whole bottle fit nicely on the whole thing: 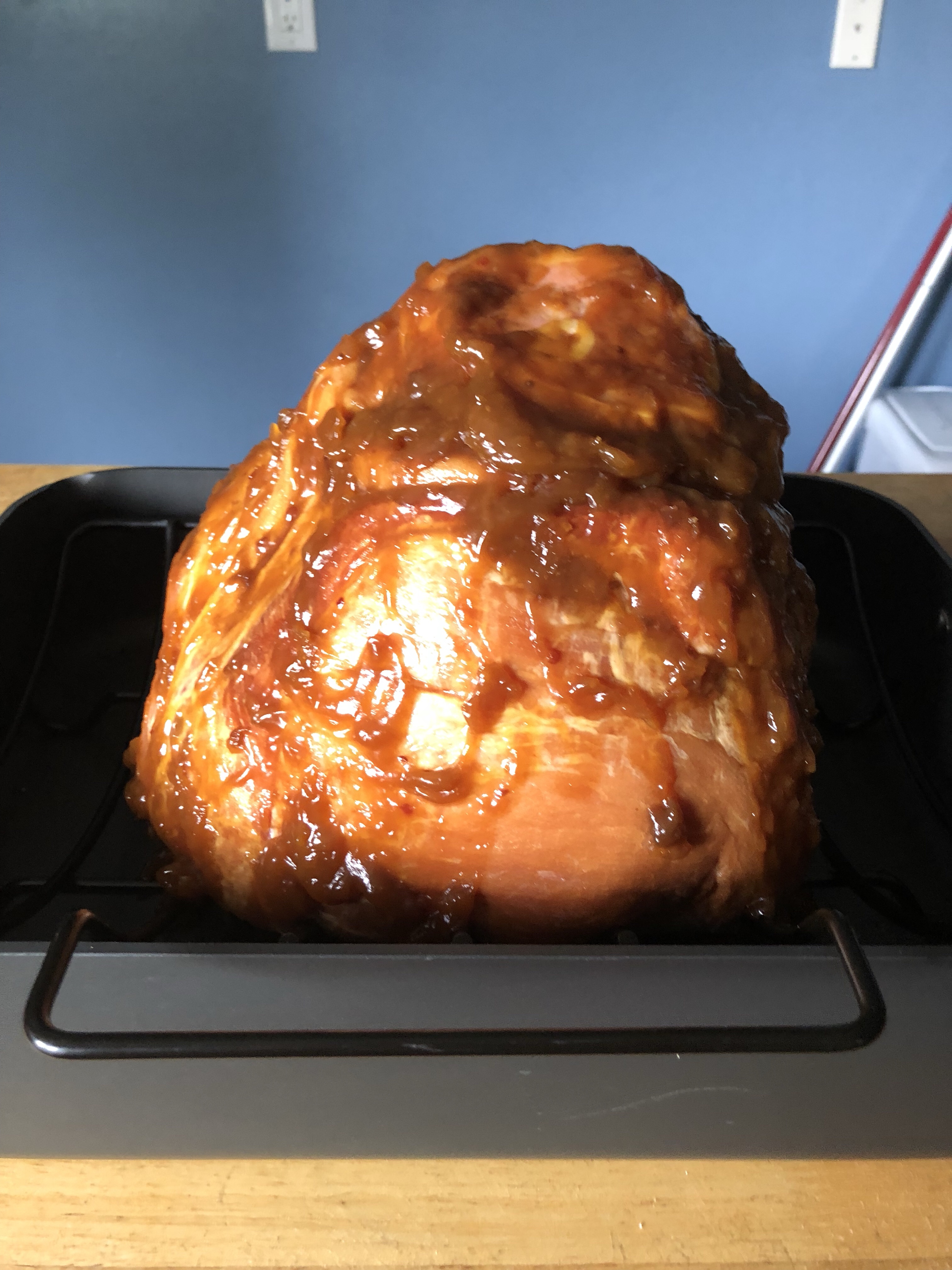 As soon as I dumped it on the ham, hubby surfaced from his basement lair and informed me that I should have taken the skin off the ham. I gave him the finger and told him to bite me. I know, I know…so mature. 🤷🏻‍♀️

Anyway, the ham went into the Craptastic Oven from Hell at 430 degrees since the recipe online said to cook it at 375 and the oven is off by 55 degrees. I set the timer for 2 hours and 45 minutes since it needed to cook for 15 minutes per pound. The whole thing seemed like a word problem you’d find in a third grader’s homework 🤯 (I hate math).

Meanwhile I peeled the potatoes for the mashed potatoes and cut them up. Kind of off topic, but does anyone else shudder when they read a recipe and discover you need to “cube” roundish objects like potatoes? Seriously, how does one actually accomplish this? 🤔 I usually end up in tears because there is no way possible to cube all the potatoes into squares that are the same size. It just is geometrically impossible.

I have to confess, I love apple pie, but I haven’t had it in years because it always reminds me of that scene in American Pie. You know the one I’m talking about. Wow, Virginia really does bring out the inappropriateness in people, doesn’t it? Oh well, Virginia is for lovers after all. 😏

So…anyway…the pie. I realized after I bought frozen pie crust that I’ve used for pies in the past, that I needed the refrigerated crust so I could have bottom and top to the pie. Back to the store I went. Oh and I had to get apples anyway. Apples are kind of the star of an apple pie. 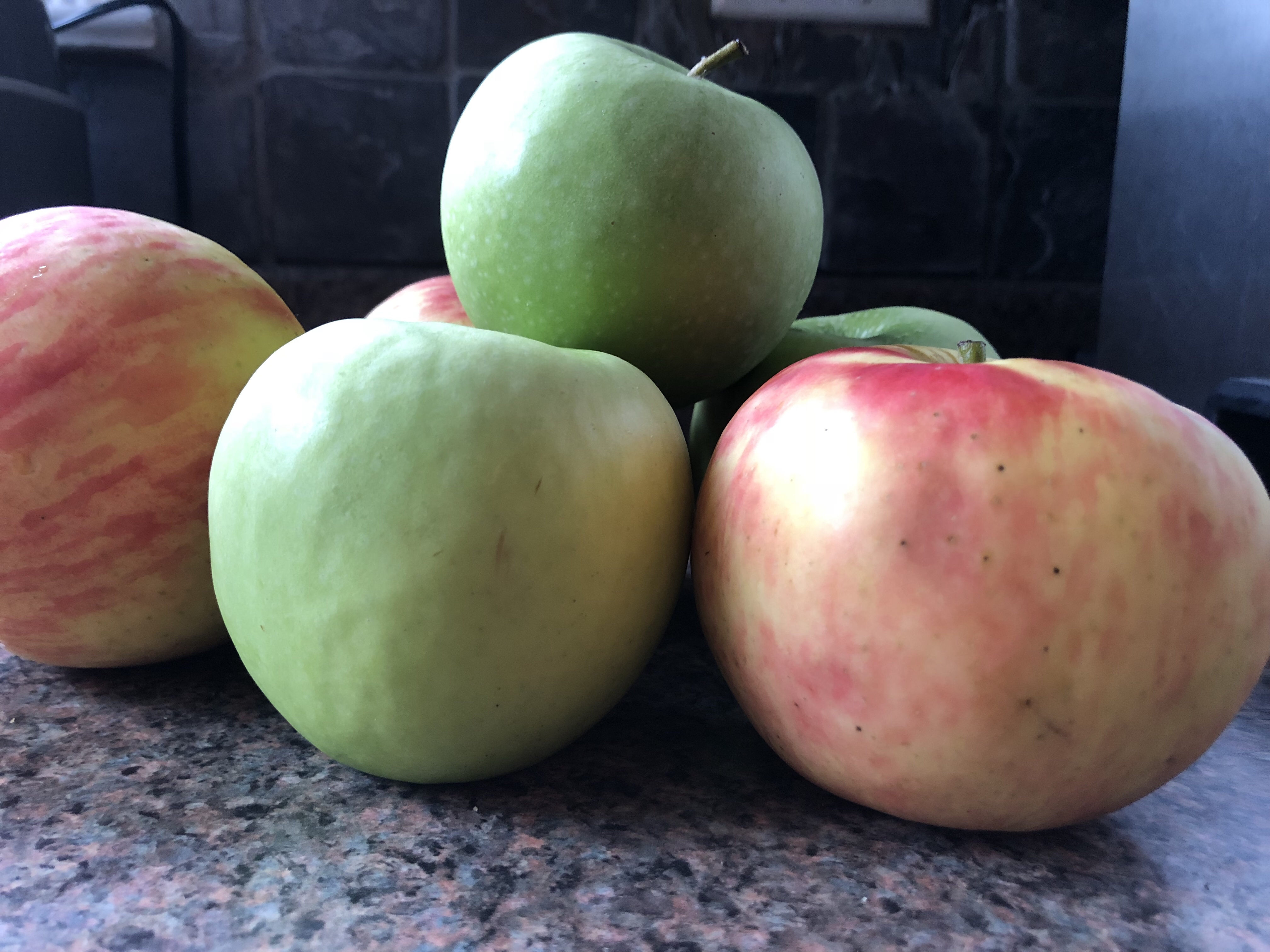 I like a medley of apple flavors so I used Granny Smith and Honeycrisp. The Honeycrisp is sweeter and the Granny Smith is tarter. I had a bit of a nervous breakdown because the apple-peeler-corer-slicer that I’ve had for sixteen years decided to crap out on me right then and there…just when I needed it the most…just when I was making my first apple pie.

I got over it and peeled and sliced the apples myself, all the while bitching about how much easier it would have been with the apple-peeler-corer-slicer. And while sticking to the floor because the juice was going everywhere. The rest of the ingredients were simple: 3/4 c. sugar, 1/4 tsp salt, 1 tsp cinnamon, 1/2 tsp nutmeg, 2 TBSP all purpose flour, 1 tsp lemon juice: 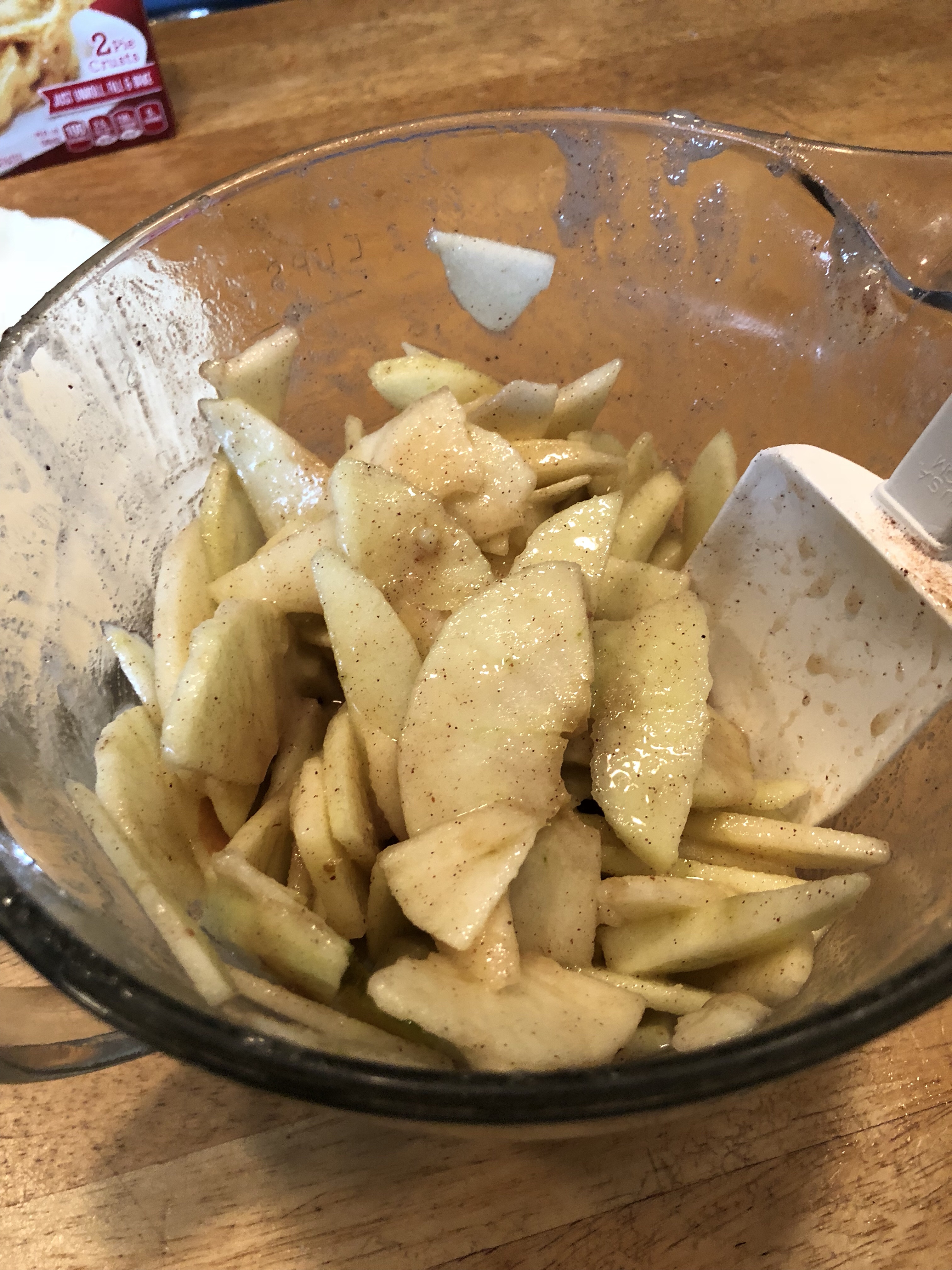 Add to pie crust and cover with second crust:

As you can see from the last picture, I tried to get fancy with the cut-outs on the crust but I’m not really up to that level yet, you know? The pie went into the oven at 455 (55 degrees off, remember?) for 40 minutes. There was nothing left to do but cross my fingers.
So let’s put a pin in the pie saga and return to the ham which was now finished. Hubby caved to my commands and cut the ham for me: 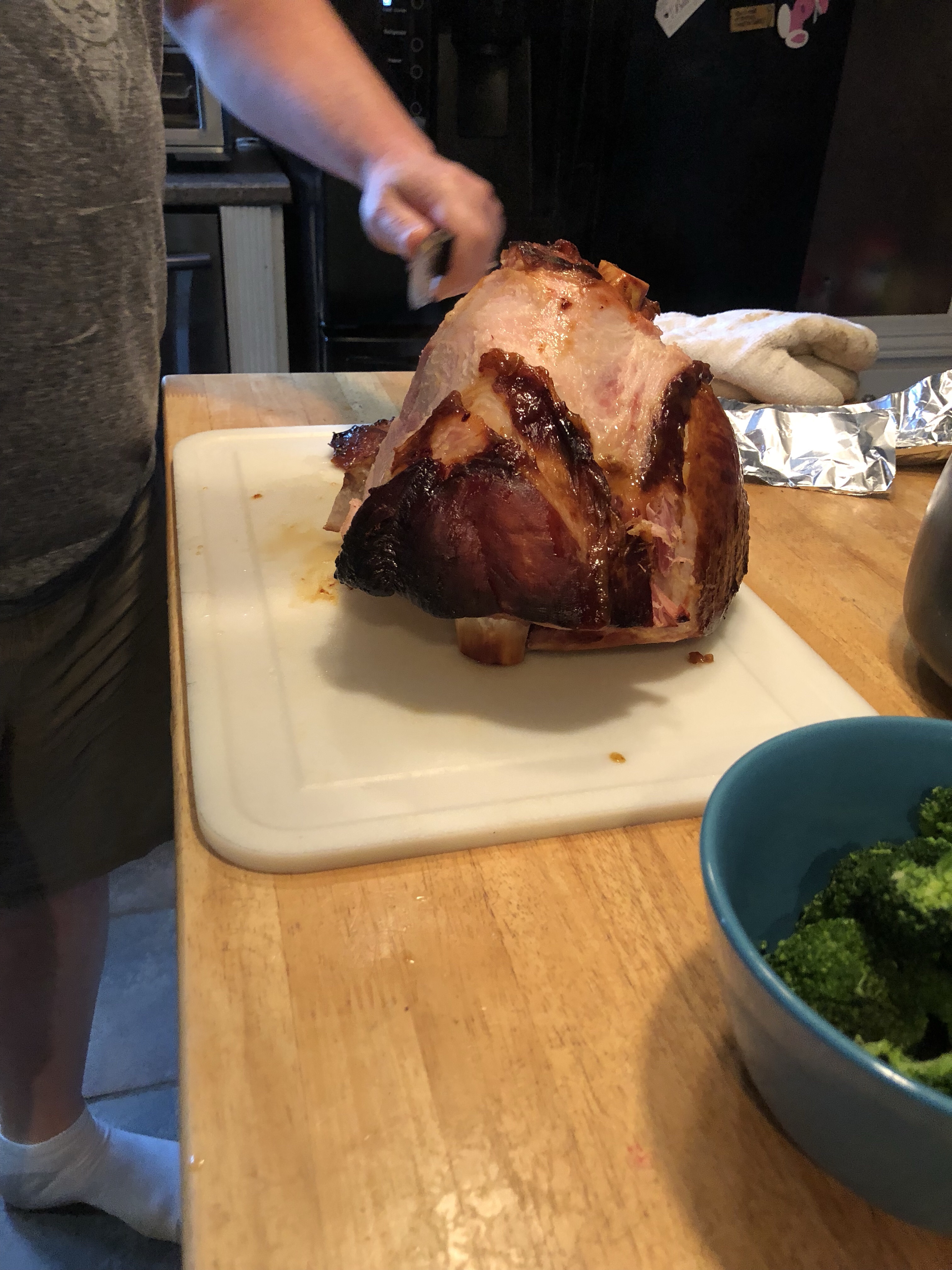 It came out perfect with a nice flavor from the glaze. The mashed potatoes weren’t too shabby either: 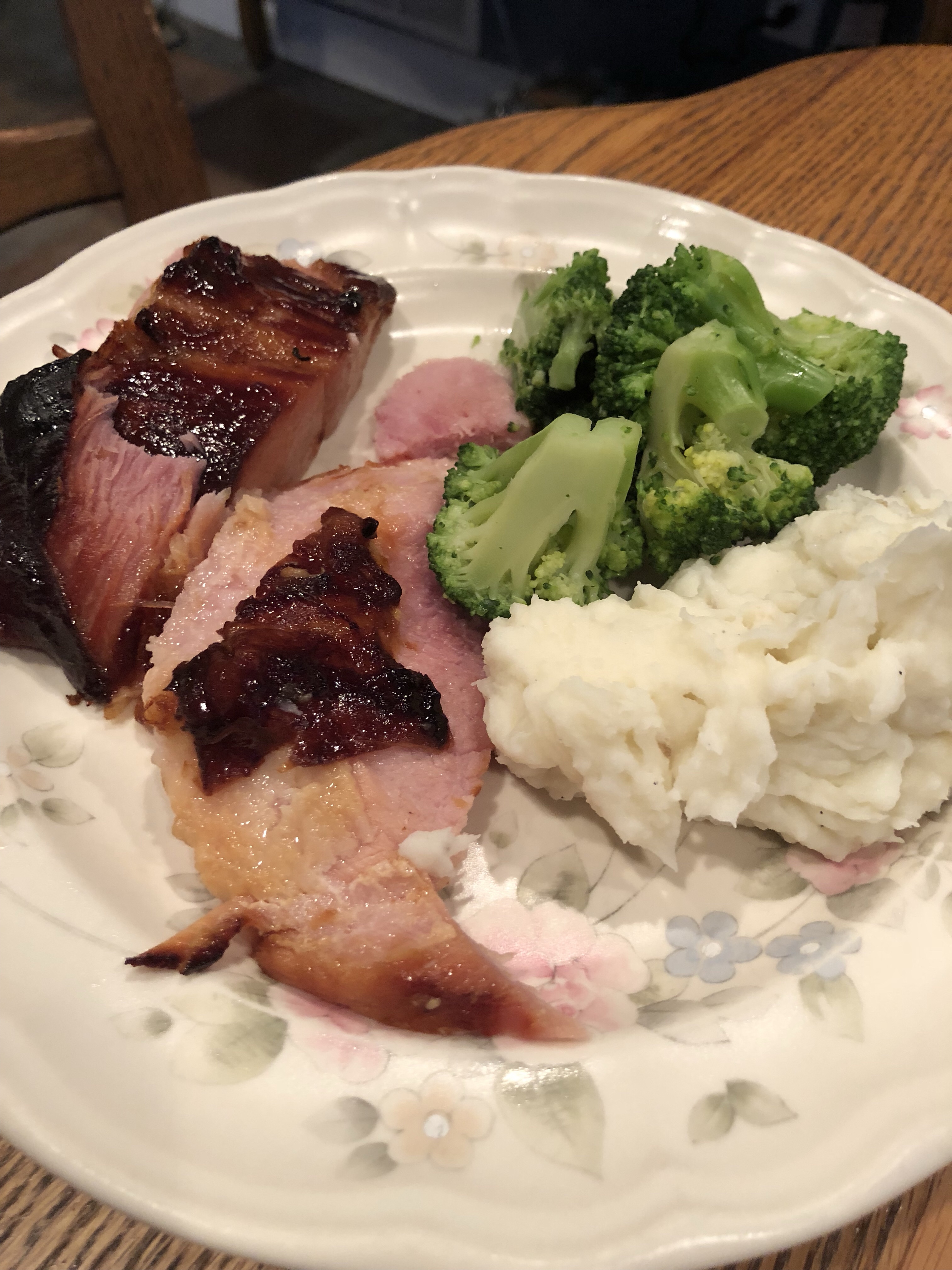 (Even the dog loved them) 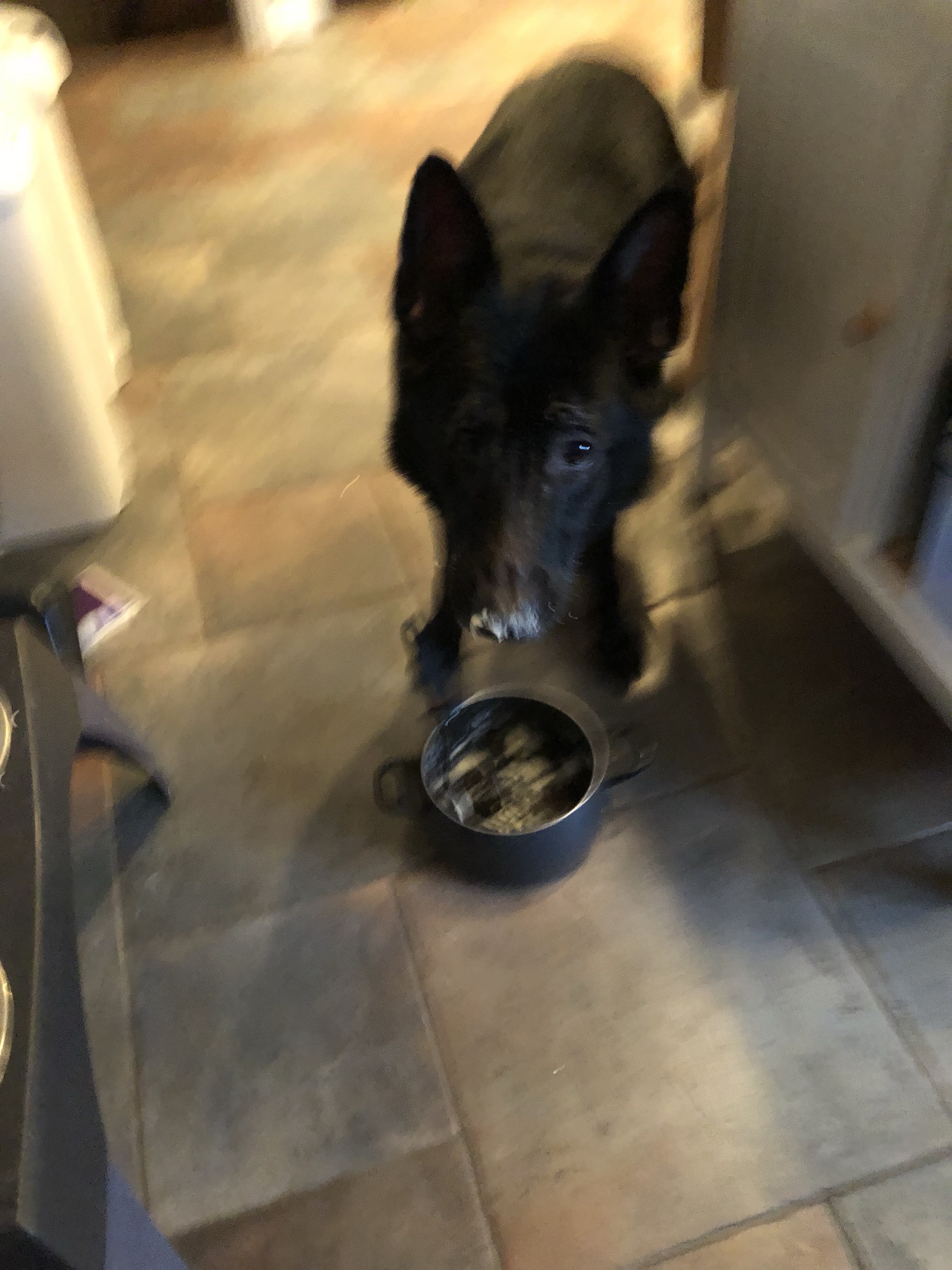 By the time I finished cleaning up dinner, the pie was done. Oh, by the way, in case you ever make apple pie—after about 15 minutes in the oven you should take the pie out and put two inch strips of foil around the edges so they don’t burn. 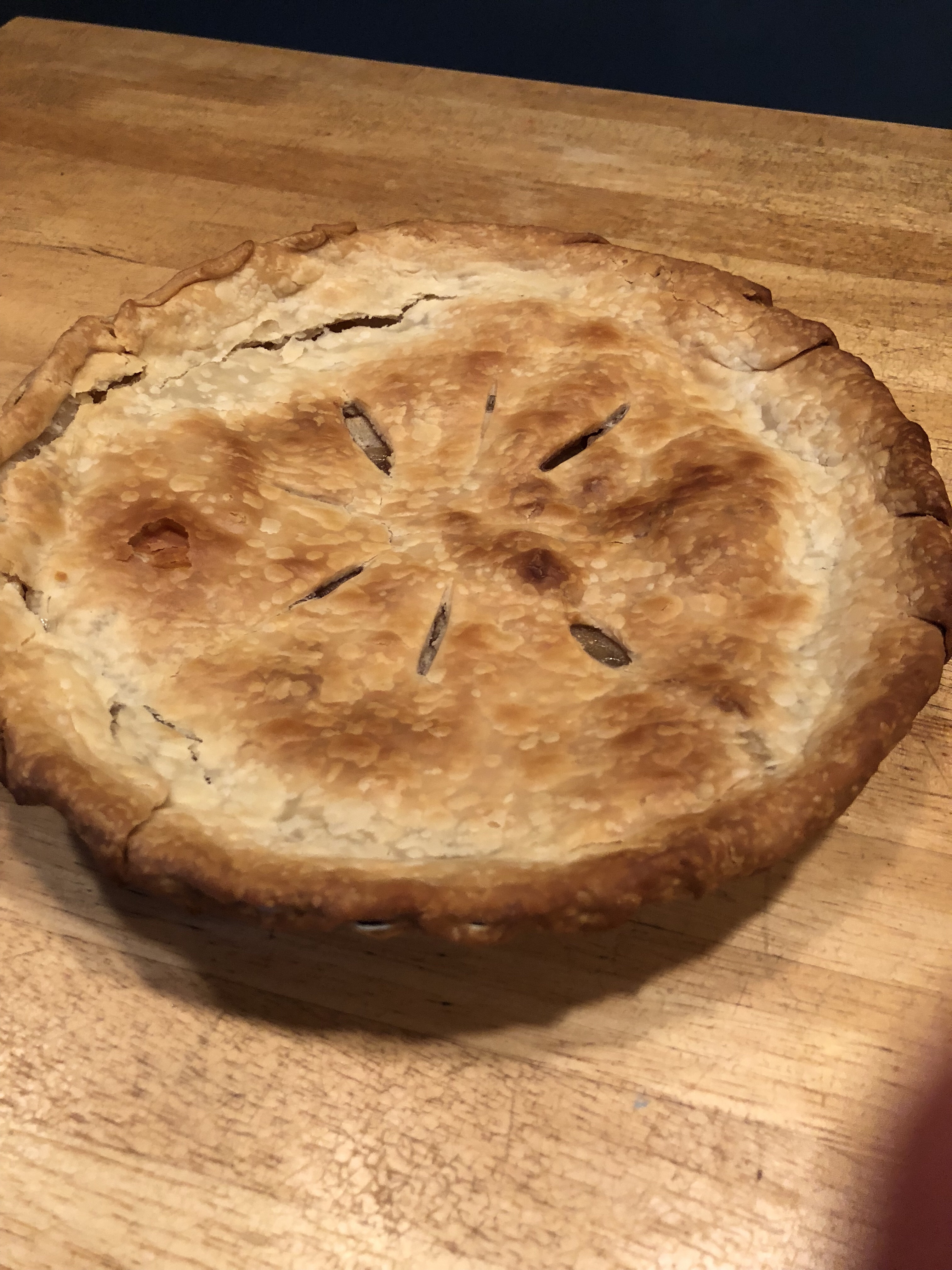 After the broken apple-peeler-corer-slicer ate up two of my apples, I was down to 4 apples when the recipe called for 6. I didn’t think it mattered that much, but apparently it does. Next time I will definitely use 6. And I will also use a little more flour as well. Still, the pie was tasty and warm inside…a slice of Americana: 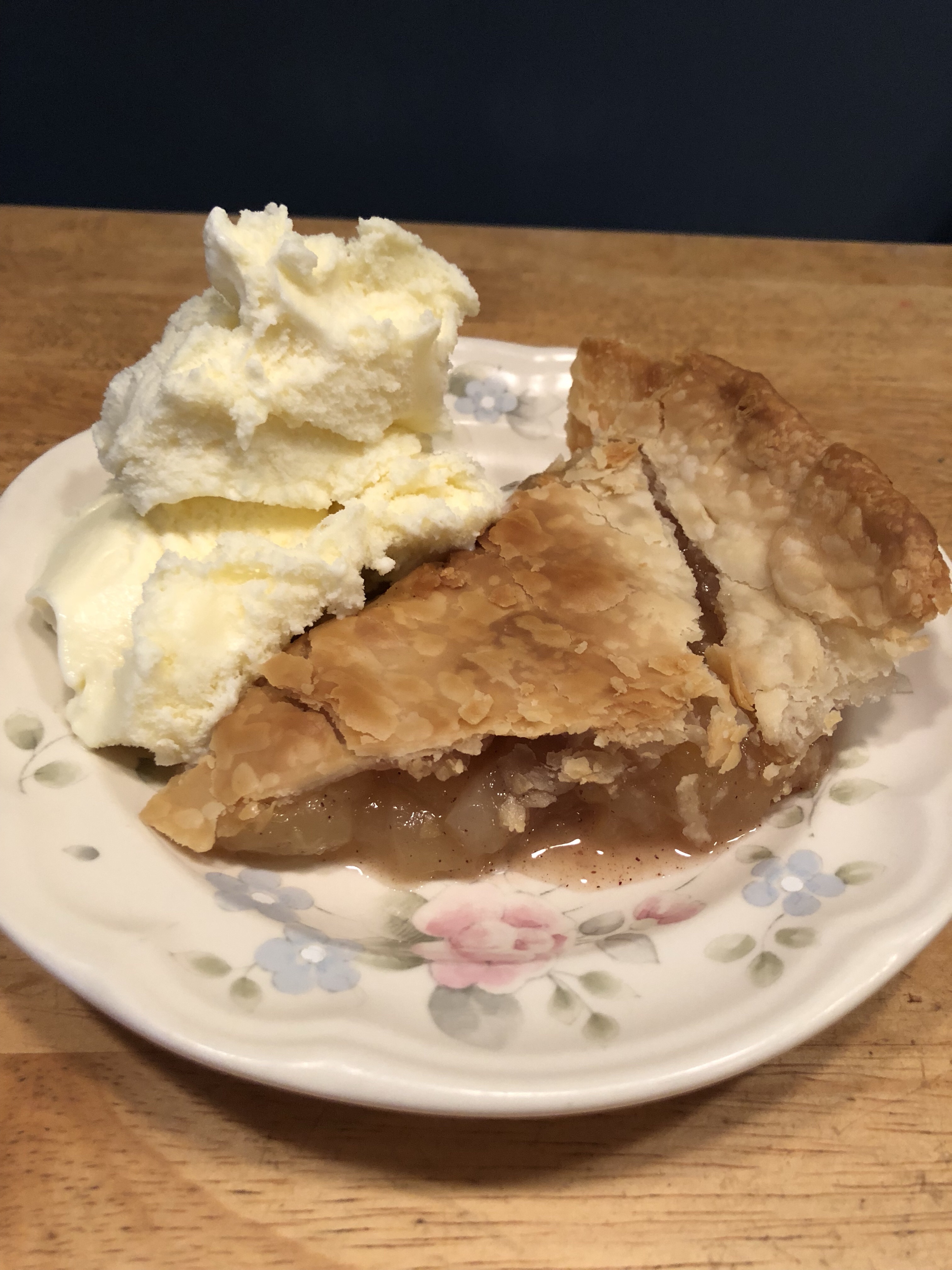 (You can make a joke now…I know you’re dying to.)