Skip to content
Parenting Humor
By Badmommy December 2, 2018April 16, 2019
FYI...my posts may contain affiliate links. This means that if you click on those links and make a purchase, I will receive a small commission at no cost to you. And those commissions are what makes it possible for me to blog. Thank you!

They don’t want to see pictures of the cleverly posed elves invading people’s homes. They think it’s not the “right” way to encourage kids to behave. That kids should be taught to behave and if you can’t get them to do that without threats or bribes, you’re a bad parent.

You know what I say to that? Bah Humbug—get the stick out of your butt. Parenting is really just a series of eighteen (or more) years worth of threats and bribes. When you’re a parent, if something works, you go with it, no matter how crazy it is—and the Elf on the Shelf is crazy, but a lovable kind of crazy (like that aunt everyone has who knits us all toilet paper covers).

***I first published a blog about Why I Love That Creepy Elf on a Shelf in 2013—some things have certainly changed since then—the competition between Pinterest Momsters has risen to an uncomfortable height. Also, the Elf return has gotten earlier and earlier every year, thoroughly stressing out parents everywhere as they struggle to come up with new and exciting hiding places. But I’m still a fan of the elf…even though my kids are way too old for it.

Here are 5 Reasons Why I Still Love the Elf on a Shelf:

5. The Elf does encourage some good behavior.

I worked as a school nurse in an elementary school for 14 years and the 8 weeks or so between Halloween and Christmas are a nightmare of epic proportions. If you’ve never had the pleasure of herding a large group of elementary aged students during the holiday season, you’re probably a lot more sane than the rest of us. (And yes, it is like tending sheep, except sheep are more cooperative, don’t ask you to tie their shoes fifteen times a day, and never comment on the pimple in the middle of your forehead.)

I know some teachers who have used the Elf in their classrooms and they report a slight improvement in behavior because of it. Hey, in the throes of the holiday season, any improvement is good—those kids are practically mainlining sugar for 8 weeks.

Remember the Mogwais turning into Gremlins? Same thing with kids ages 5 through 10 at Christmas time. It also does help at home for kids to think that maybe, just maybe their $hitty behavior could get back to the big guy in the North Pole. Sometimes, this is enough to get them to reconsider hitting their younger sister in the head with a Tonka truck. (My own two children, who made sibling rivalry an Olympic sport—they actually broke into a sweat when hating on each other—snapped to attention the first time they encountered the Elf on a Shelf.)

When I was younger, my grandmother claimed an Elf was hiding in her attic after Thanksgiving and was watching us. It was mainly a ploy to keep us out of the upstairs room where she hid our Christmas presents. But Grandma was definitely ahead of her time. I not only stayed out of that area, I was convinced an Elf had drilled a little hole in the ceiling and was watching me. You better believe I was well behaved at Grandma’s house.

4. The Elf gets everyone out of bed in the morning

When my kids were littler and actually cared about the Elf, they would bound out of bed every morning to see where he had hidden the night before. And I would usually bound out of bed at 4 am when I realized I forgot to hide the Elf the night before because someone gave me such a hard time about going to bed that I practically passed out standing up.

But it made the kids laugh to see where their silly Elf was or what shenanigans he was up to. And that made me smile. As an added bonus, I didn’t have to beg and plead and threaten to get the kids to put their feet on the floor in the morning like I normally do. Sure, the rest of the day was pure chaos, rushing from school and work to dance classes and basketball practice, but there were 5 minutes every morning when the day was simple.

3. He’s fun for the whole family

Sort of. The first couple years I was knocking myself out to move the Elf and not repeat the same spots. This was the only time I was thankful for people posting on social media…I got new Elf ideas on a daily basis. This was pre-Pinterest world, people—the parents nowadays have a lot more options for ideas than I did five years ago. They also have more “keeping up with the Joneses” stress than I ever had.

My friend told me the kids actually discuss the antics of their Elves with the other kids at school. I doubt this is a water cooler like discussion, but more like a Snapchat documented Elf antic forum.

So now the kids are pretty much grown and we still have the Elf on the Shelf. Our Elf lifts weights and hides behind the iceberg lettuce. He ziplines across the living room and makes a mess with the cotton balls. It’s fun to see what the kids will come up and they still look for the Elf when I hide it.

Yeah, we forget to move it all the time. But it’s become a family holiday activity—like making a gingerbread house or baking cookies. And it’s a heck of a lot less stressful than either of those other activities. (See Crazy for Christmas Cookies)

My son actually tried to “kill” our Elf on the Shelf a few years ago by “touching” him. The legend goes that if you touch an Elf, they lose their magic. The boy child was in middle school at the time. If you know anything about middle schoolers, you know that they’re a pretty miserable bunch of hormone-fueled jerks…Christmas time and the other 11 months of the year. So his touching of the Elf was not some red flag that he needed psychiatric help, in case you were wondering.

He touched the Elf and the Elf tumbled to the ground. He did not shatter like the dozen or so hand blown glass ornaments that my children (and dogs) have broken over the years. Sprocket (our Elf) remained intact. Thank God the younger one didn’t see this whole scenario play out in front of her—she would have needed to be hospitalized for dehydration that would undoubtedly ensue from the river of tears she would have cried.

The Elf, due to his indestructible nature, can be hidden in so many places. The tree doesn’t scratch him up. He can be suspended from the ceiling because he’s so lightweight.  He can go in the fridge (to eat the cookie dough I meant to bake…) because he can withstand cold temperatures. He can be tossed behind the couch easily when your child walks in on you hiding him. He can be squished into a mason jar or any other tight space humans cannot fit into.

Over the years, he’s also fallen from his hiding spot and into the jowls of our family dog, Colt. Colt chews on everything that was not meant to be chewed. He has eaten ornaments, shoes, couches (he pooped out foam for a month), and siding. Yes, siding…as in, siding off the side of the house. He however, did not succeed in chewing Sprocket into an early Elf grave.

Maybe it’s because of my next point:

1. The Elf on the Shelf is magical

Some people think the Elf is creepy. “He’s watching you all the time? Spying on you? That’s stalker-ish! Proposterous!” Those same people have apparently forgotten the little ditty about Santa watching you while you’re sleeping and all that other nonsense.

When I was a kid, I thought Santa was this omnipresent being that was watching me take a bath and go to the bathroom. Talk about creepy. At least the Elf is only watching over you while you feed your vegetables to the dog or peek at the Christmas presents under the tree—behaviors any parent wants to curtail anyway.

I don’t think he’s creepy—I think he’s magical. He reminds us of a time when everything was much simpler—behave and your wishes will come true. Santa is real. Christmas is a magical time of year that makes your heart light and air with joy. He reminds me of being a kid…something I don’t often remember being of advanced maternal age and all that.

And being a kid isn’t all that bad of a thing for kids these days to be. They have too many burdens at a young age as it is. Everything in their life is competitive and stressful. They’re constantly being barraged by technology and social media. There is no playing outside in the dirt and building treehouses or playing wiffleball with friends. Those days are gone.

But the one thing that we still have to give our kids is the magic of Christmas. The magic that the Elf on the Shelf brings into our homes. 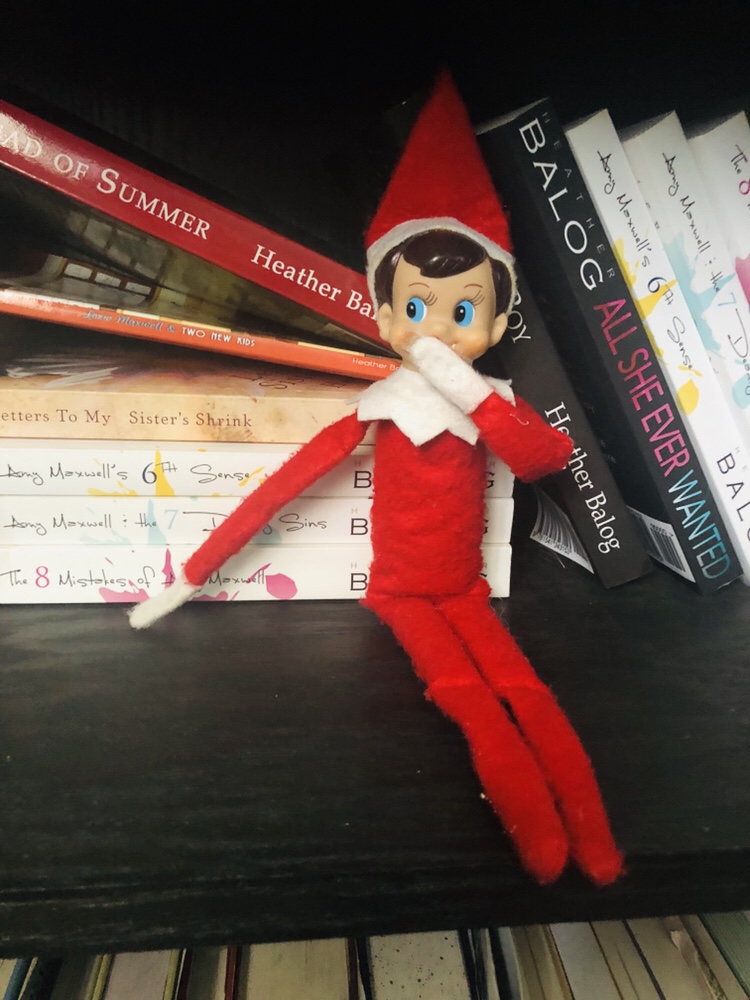 ***Some of my posts include affiliate links, which means, if you click on those links and make a purchase, I may receive a commission***