Skip to content
Parenting Humor
By Badmommy December 18, 2013April 19, 2019
FYI...my posts may contain affiliate links. This means that if you click on those links and make a purchase, I will receive a small commission at no cost to you. And those commissions are what makes it possible for me to blog. Thank you! 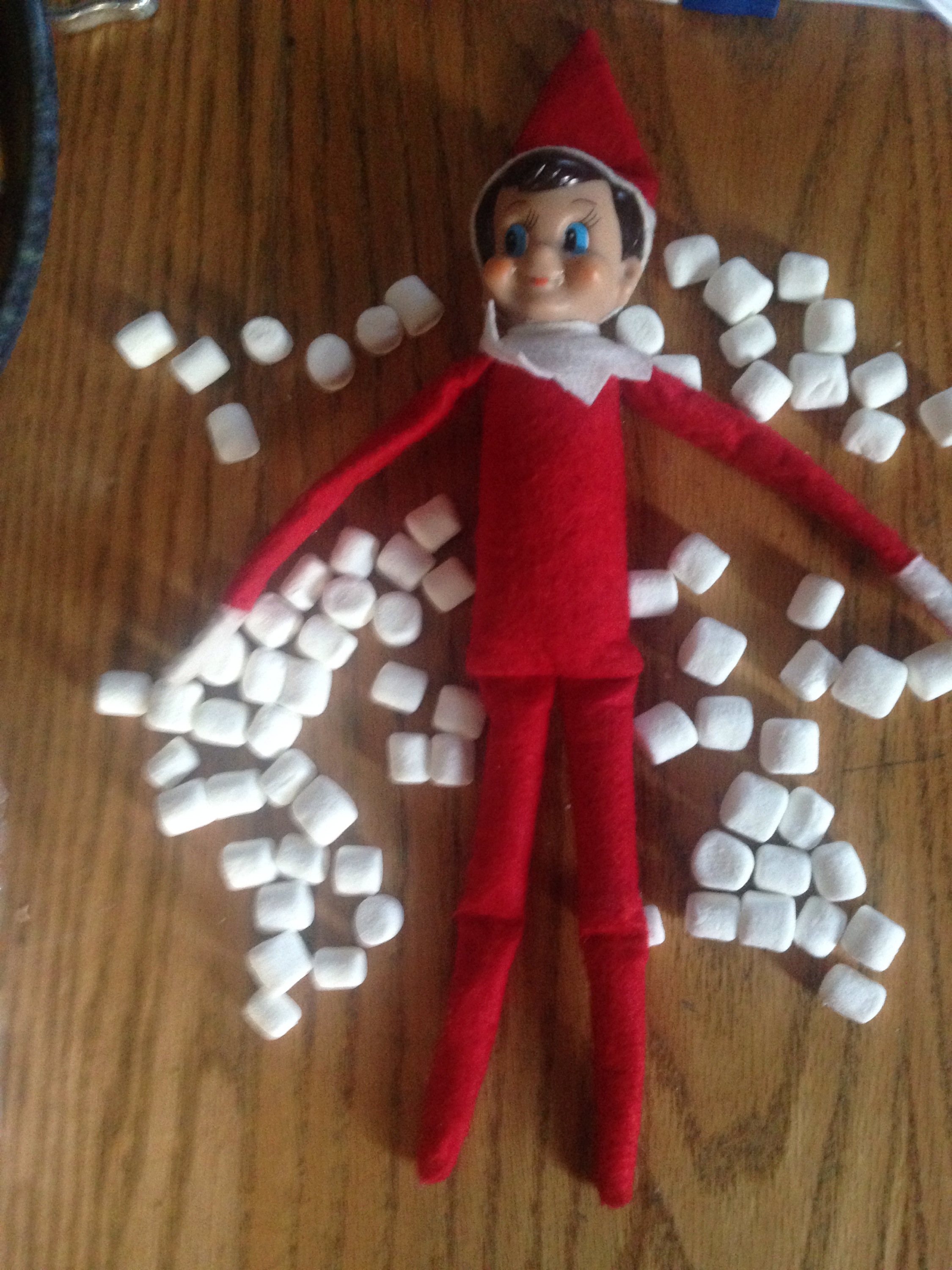 They don’t want to see pictures of the cleverly posed elves invading people’s homes. They think it’s not the “right” way to encourage kids to behave. That kids should be taught to behave and if you can’t get them to do that without threats or bribes, you’re a bad parent. You know what I say to that? Bah Humbug.

Parenting is really just a series of eighteen (or more) years worth of threats and bribes.

You would think around Christmas time, that kids would be walking the straight and narrow and be on their best behavior. Actually, in my experience from working in an elementary school and with my own kids, I’ve found the exact opposite is true.

Kids are demons from the day after Thanksgiving until Christmas Eve. It’s like they’re mainlining sugar when they’re not stuffing candy canes and cookies down their greedy little gullets. Remember the cute little furry mogwais turning into Gremlins? Yeah, that’s it.

Our elf, Sprocket, has been with us for four years now and I confess, I did originally, um…enlist his help when my kids were at the peak of their sibling rivalry squabbles. No amount of begging, pleading or threatening to cancel Christmas, Easter or their birthdays seemed to do the trick with my then nine and five year old.

We did time outs in their rooms; they assaulted each other via air ducts. They were relentlessly beating the crap out of each other on a daily basis, nearly toppling the Christmas tree one morning as they rolled around the living room. That was the day I went out and…um, I mean, called Santa to send me an elf.

When they came home from school, there he was, propped up happily with his plastic face all smiles, on the coffee table. I explained his purpose, read the book and we went online to name him. At first, they stared at him wide eyed, not sure what to make of this little tattletale Santa had sent to spy on them. They practically walked on eggshells and when they started to get rowdy, I would clear my throat and point to the elf and they would get back in line.

It reminded me of how my grandmother used to claim elves were in her attic after Thanksgiving and staring at us through the “hole” in the ceiling. She would show us pictures of some scary little cretins so that way, we were petrified of them and A., wouldn’t go upstairs and B. behave like angels when we were at Grandma’s. I swore up and down one time I saw the elf’s eye pressed against the ceiling.

But the novelty of our elf on the shelf quickly wore off the following Christmas. My older one was in fifth grade and seriously questioning the existence of Santa and his merry henchmen, so it was very difficult to keep him in line with an elf, who according to him, “hadn’t even changed his expression from last year”.

He asked me why the elf hadn’t gotten any wrinkles over the year like I had. I replied that Santa treated his elves out for botox after the Christmas season as a reward for a job well done. The kid looked skeptical and the hubby rolled his eyes. I guess I wasn’t getting botox in my stocking that year either.

The following year was even worse…not only did the older one now not give a flying flip about Santa, he purposely tried to get his sister completely undone by threatening to touch the elf. For those of you who don’t know, touching the elf causes it to lose its magic and he or she can’t fly back to the North Pole and they die laying on the shelf just staring at you from now to eternity.

Of course the thought of Sprocket losing his magic nearly made my daughter lose her shit and soon they were rolling around into the Christmas tree again, her crying and him laughing maniacally. I swore up and down to my husband I was not dealing with the &%*# elf again this year.

You know how many times I woke up in the middle of the night in a cold sweat after I realized I had forgotten to move the elf? Or the nights I strategically planned out the elf’s hiding spots so nothing was repeated? Or the nights I had to stay up till midnight to move the freaking thing because I had some sleepless child wandering around? The elf was causing me to lose my mind. Oh yeah, lazy parenting at its finest.

Well, the elf wasn’t helping anymore, so I felt it was time for him to retire this year. Until…I started seeing the pictures. The cute tea parties the elf was having with the stuffed animals, the elves riding My Little Pony with Barbie clothes on, the elf lifting weights. I thought, hey, maybe I can have fun with the elf this year. And so our elf has graduated from sitting blah on the shelf to ziplining through the living room, sorting out the family’s socks and ballroom dancing with the Disney princess figurines.

My daughter bounds out of bed every morning just to see what antics her elf has been up to overnight. The look of shear JOY on her face, real unadulterated joy that doesn’t come from a video game or TV show, is beyond priceless. She’s probably going to be teetering on the brink of not believing next year. This may be it before she’s a jaded preteen. I almost want to snap a picture of amazement on her face every morning.

Even my son, who now suggests places for the elf to hide, is getting into it. His suggestions thus far, however, have been rather lame and I told him he needs to work on his imagination. He asked if he could get paid to hide the elf and with twenty days left, I’m considering it. Hey, it’s lazy parenting after all…

You may think the elf is stupid or pointless, but I like having this silly little tradition with the kids. Kids are growing up way too fast in this ultra tech savvy, modern world. They’re stressed out and don’t know how to have fun with simple things. Just being able to start their day with a smile and laugh at their ridiculous elf is more than enough to warrant keeping him around for years to come.

Maybe I can find him a Valentine’s Day costume and keep him for another two months? 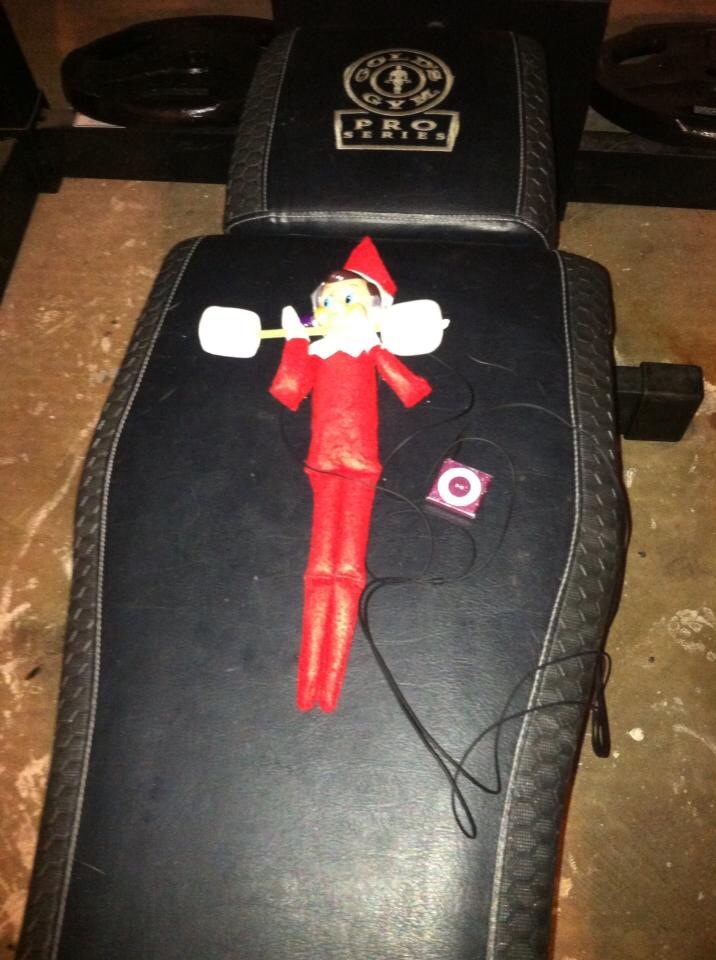 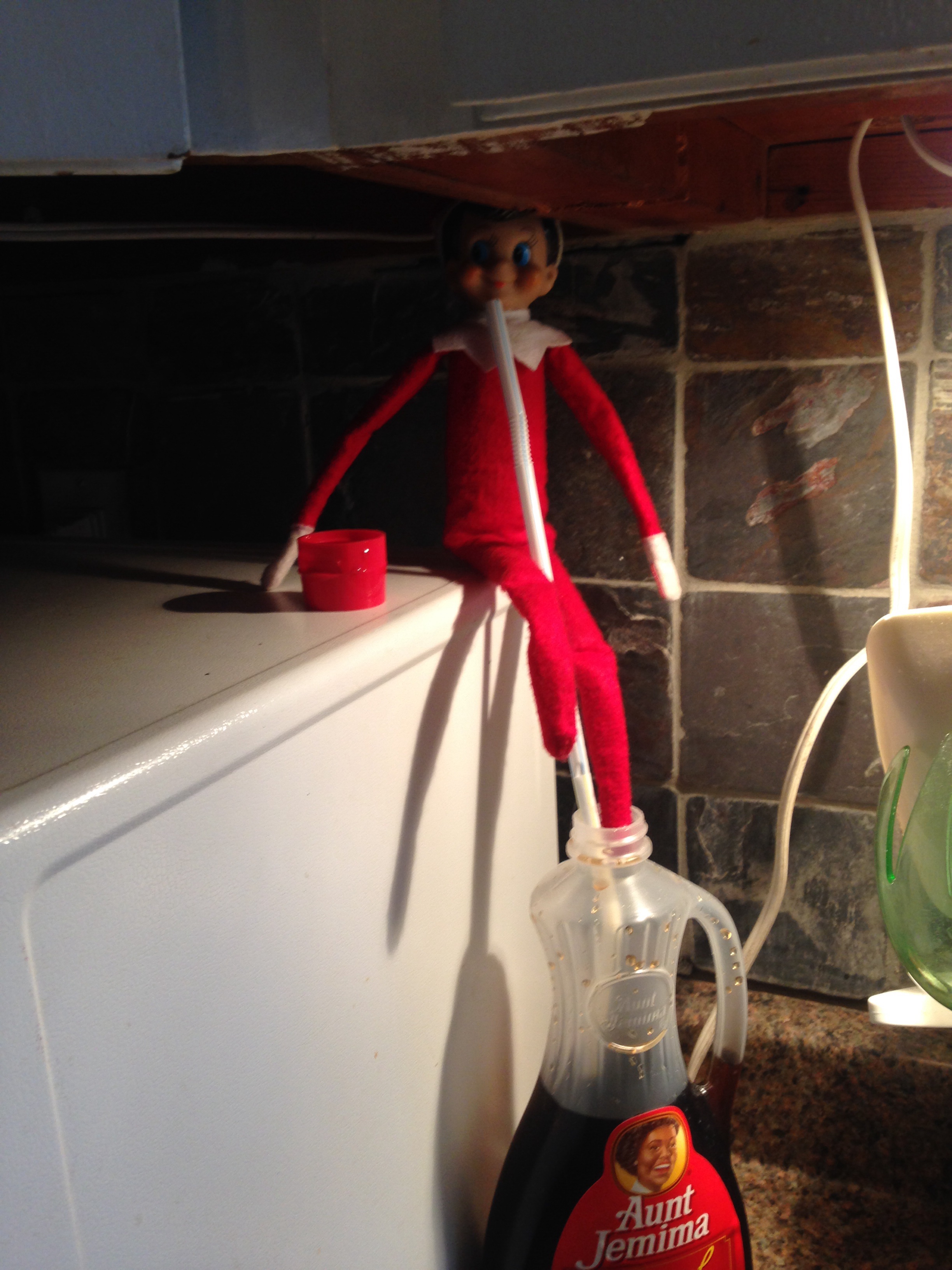