Skip to content
The Bad Mommy Cooks the USA
By Badmommy December 30, 2018April 16, 2019
FYI...my posts may contain affiliate links. This means that if you click on those links and make a purchase, I will receive a small commission at no cost to you. And those commissions are what makes it possible for me to blog. Thank you!

My goodness, the holidays seem to take over everything, don’t they? I haven’t posted a USA meal in what, almost two months? We actually had these New Hampshire Apple Cider Donuts back in November and I am just getting around to posting them now!

We Visited New Hampshire This Summer

So our family went to New Hampshire this summer. The dog came with us on his very first vacation. We rented a beautiful cabin that made me really nervous because our dog, though loyal and sweet, is completely unpredictable. He hates being left alone and tends to be really naughty when we go out (rooting through the garbage, chewing shoes, lately…eating ornaments off the tree…).

So we brought his crate which he hasn’t really used in a few years, but we were so nervous he was going to go crazy in this lovely house when we went out to dinner.

(Yes, I know, we had a nice kitchen to cook in. No, I don’t cook on vacation…I barely cook when we’re not on vacation.)

Turns out, the only thing he chewed when we went out to eat was his crate. Yup…ate a hole right through it. We found him patiently waiting for us when we returned from eating.

Anyway, besides the crate chewing incident, he was really well behaved (he was excellent on the 7 hour car ride—only puked once). We hiked, roasted marshmallows, and played games. We kayaked and swam in the lake. Erm, excuse me, pond. The dog did not swim because he’s a weenie, afraid of water. It was a very relaxing few days in the clean mountain air. 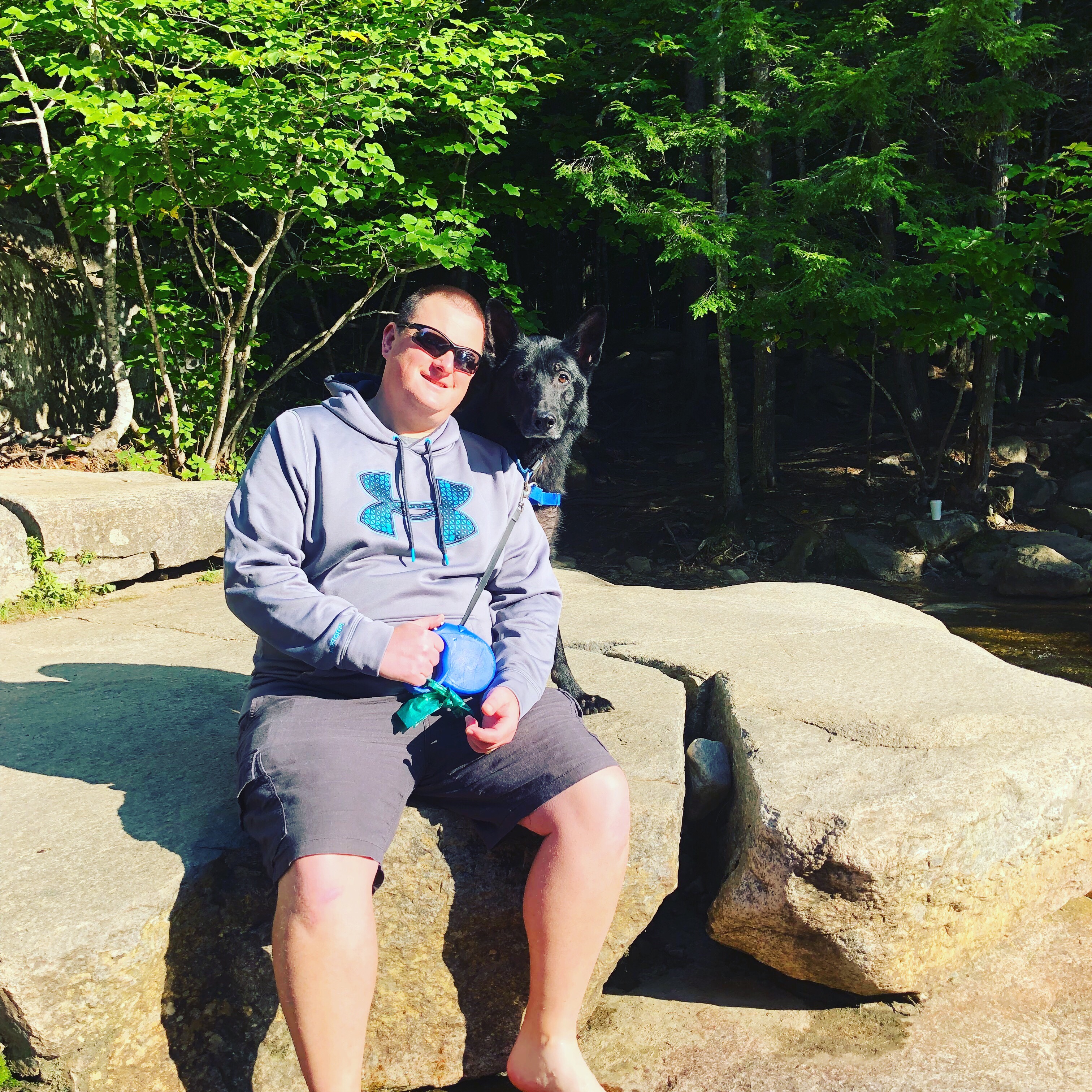 The one thing we did not get to do when we went to New Hampshire was sample their famous apple cider donuts. We tried to. There was a place about a half hour away that sold them, but we just missed their business hours when we got there. We were leaving the next day so we didn’t get another chance.

That’s why I needed to make Apple Cider Donuts for our New Hampshire meal. of course, I picked a very complicated recipe that had multiple steps and would take hours to make. Life would have been a lot easier if we had just gotten to the apple cider donut store earlier when we were in New Hampshire.

A Lot of Steps…So Allow Yourself A Lot of Time

I found a recipe on Pinterest that used the air fryer. I stopped looking. I LOVE my air fryer and I will find any excuse to use it. I thought I was going to whip these apple cider donuts up on Thanksgiving morning for breakfast.

I was wrong. This was largely due to the fact that I usually just skim recipes when I pin them and make sure that I have all ingredients on hand. If I had read this through, well, maybe we would have just opted for the hour trip to Duck Donuts. Seriously…it would have been faster. Consider yourself forewarned.

Start Off With The Cider

Bring the apple cider to a boil. THEN turn down the heat and simmer for about 20 minutes until it reduces to 1/2 cup. THEN put it in the fridge to cool.

I simmered the apple cider for well over 40 minutes and it still did not reduce to 1/2 cup. I poured 1/2 cup into a bowl and stuck it in the fridge. Yeah, yeah, that’s not how you do it, but for heaven’s sake this was taking forever and people were starting to get antsy about breakfast. They were breaking out the cereal boxes to have a pre-breakfast appetizer.

Cream butter and brown sugar until fluffy.
(Make sure the butter is really soft…this was yet another one of my mistakes. I forgot to take the butter out the night before so…well, it was a little difficult to cream.)

Once the Apple Cider is Ready…

Add the eggs one at a time. Then pour in the reduced cider.
Add dry ingredients and mix until well combined. Grate the apple into the dough and mix.  Drop the dough out on a lightly floured surface and knead by hand until it is not sticky anymore. Divide into two balls and wrap each with plastic wrap. 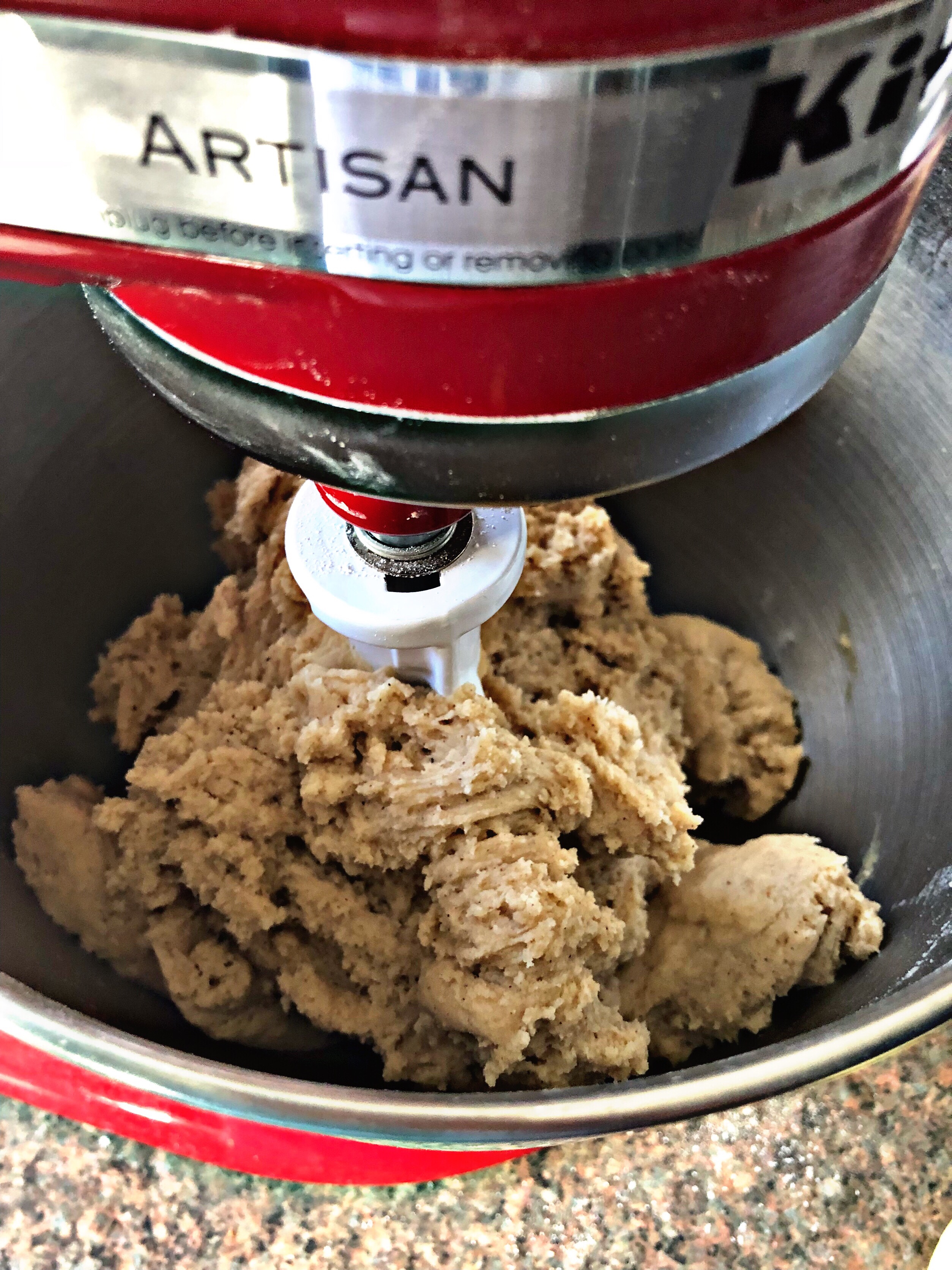 You should be ready to make donuts, right?

This dough needs to be refrigerated for a half an hour. Then you can roll out each ball until it is about an inch thick. Cut out 3 inch circles of dough—I used the rim of a glass. Then cut out a 1 inch circle in the middle—I used a medicine cup for this. You can use the scraps to make donut holes. 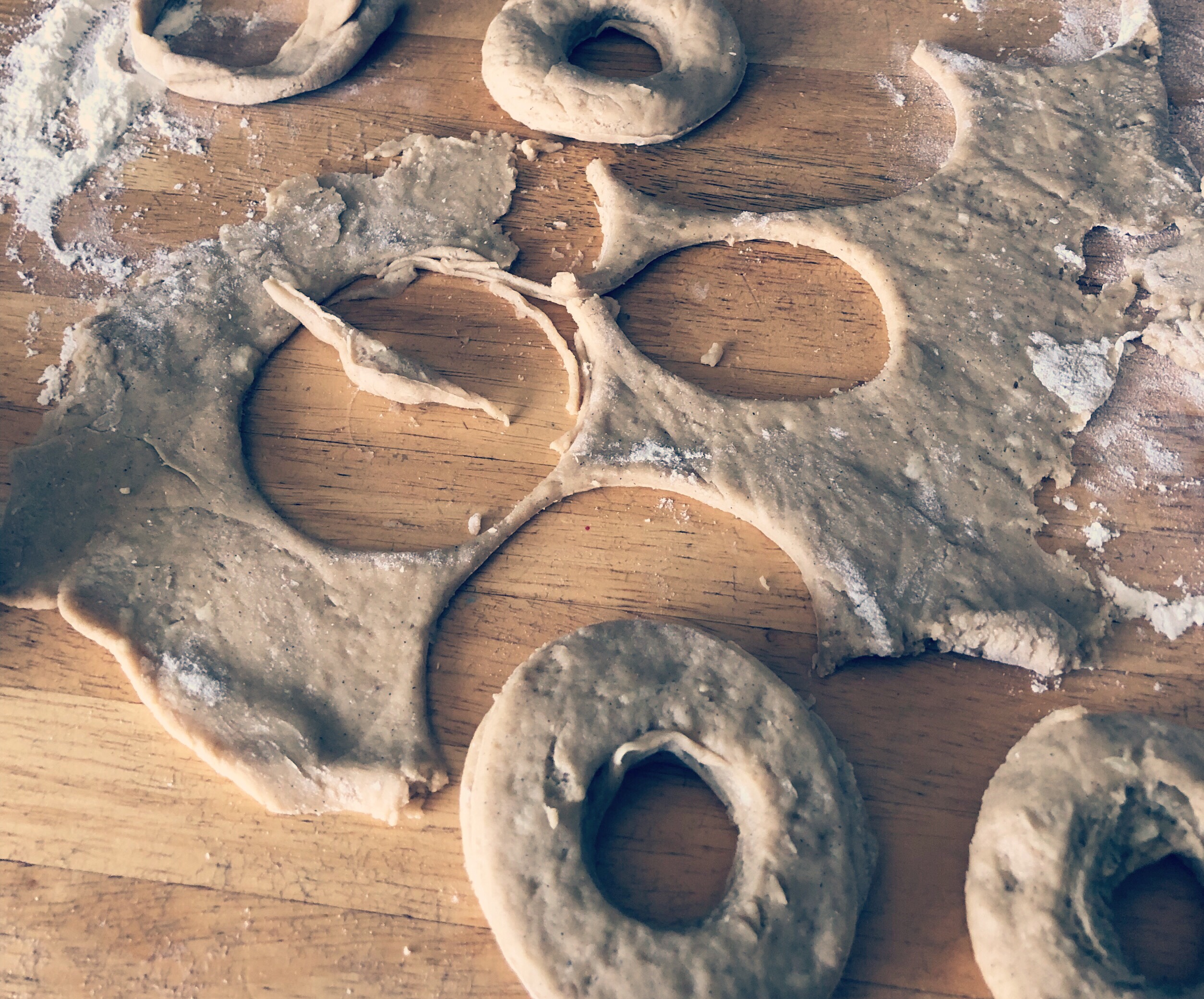 Preheat the air fryer to 350 and spray the bottom of the air fryer basket with non-stick spray. We have the Cuisinart Air Fryer so I just line mine with foil.

Are We Ready to Make Apple Cider Donuts NOW???

Nope. Well, not quite, yet.

Turn off air fryer. Yes, you read this correctly. Place 4 of the dough circles in the air fryer basket and let them rest in the air fryer for 5 minutes. Apparently this is called “proofing”.
(By this time my family was moving on to lunch. I did the “proofing” with one batch and then I had had it.)

Air fry for 5 minutes at 350 degrees, turning halfway through. Combine cinnamon and sugar on a plate. Brush the sides of the donuts with melted butter. Toss in the cinnamon sugar mix.

I also made a glaze with confectioner’s sugar because that’s what Hubby wanted on his donuts: 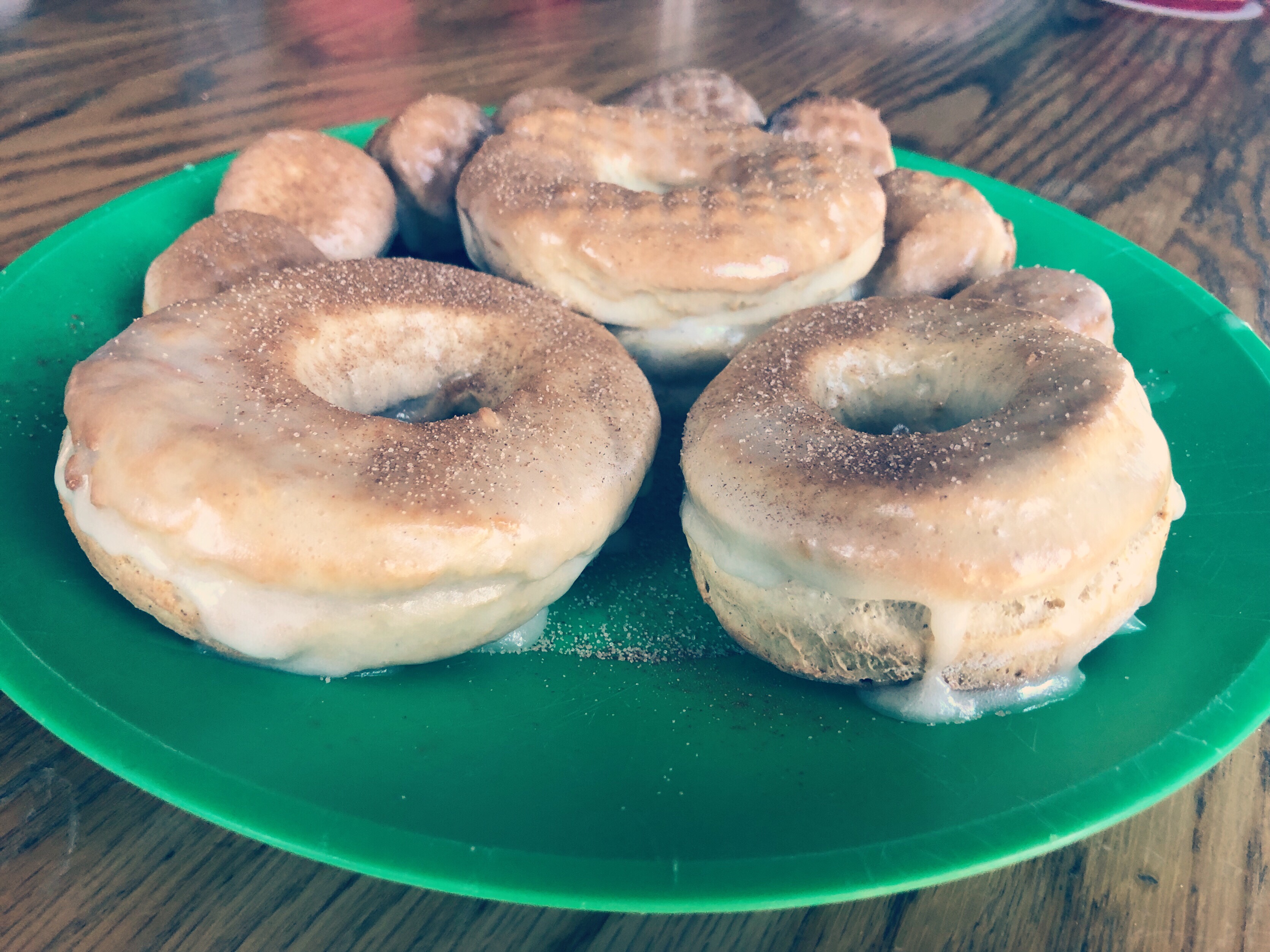 NOW You Can Eat

By this time, my family was gone. Thank goodness, too, because the donuts were pretty dense and nowhere near as light and fluffy as the air fryer apple cider donuts in the picture. Kind of like our Rhode Island Doughboys  Still, they tasted pretty good. Try them for yourself.