Skip to content
The Bad Mommy Cooks the USA
By Badmommy March 4, 2018April 18, 2019
FYI...my posts may contain affiliate links. This means that if you click on those links and make a purchase, I will receive a small commission at no cost to you. And those commissions are what makes it possible for me to blog. Thank you!

Next up, my home state. While not much beats New Jersey food, sometimes it’s rough living in here in the Garden State. People who don’t live here or haven’t spent much time here, have many misconceptions about New Jersey. They think that New Jersey is a New York ripoff, the armpit of the Tri-State area. That we’re uncultured. They think that the state is dirty and the people are rude and that we all talk like we’re on The Sopranos. They resent us because we don’t pump our own gas.

None of that is true (other than the gas part). Okay, maybe us natives can seem a little hostile at times, but that’s only because the 95% of the rest of the country is so darn, freaking polite. Seriously people, sometimes you need to flip the bird at the little old lady driving 10 miles an hour in front of you on the Parkway.

What people don’t understand about Jersey is that it’s far from uncultured—it’s actually an incredibly diverse state, and not just in its makeup of citizens. You can get any kind of authentic cuisine you want in Jersey, Tex-Mex, Chinese, Japanese, Indian, Ethiopian, Italian, you name it. Bagels? Lenders has nothing on our bagels.

There aren’t too many places that you can get kick-ass pizza from the corner pizzeria for dinner, with a side of salad veggies from your own backyard garden (seriously, other than NYC, no one else does pizza right. I feel very sorry for the rest of the country).

Some of us live in busy cities and some of us live on farmland. You can catch a train into the city for a play and take the same train down the shore for some rays. (Like seriously, the same train goes from one end to the other.) The Jets and Giants actually reside in New Jersey, despite their titles, believe it or not. We got some awesome views, too. Want pancakes at 1 am? We’ve got 24 hour diners.

We’ve got a lot of things going for us, including one of our most iconic dishes. I’m almost embarrassed to admit that I’m from New Jersey and that I have never indulged in one of New Jersey’s classic foods. It’s the one food that no one in New Jersey can agree on its proper name—there have actually been maps drawn up to define the dividing line between those who call it pork roll and those who call it Taylor Ham.

Yup, you read that correct. Born and bred in the Garden State and I’ve never had pork roll. It is pork roll for all you Taylor Ham enthusiasts—I worked at Hole in the Wall Bagels for a few years and Taylor Ham, egg, and cheese doesn’t roll off the tongue like pork roll, egg, and cheese does. And despite working in a deli that served up breakfast sandwiches to hungover college students, I had never actually tasted the pork roll.

I’m all for egg sandwiches, but ughhhh, pork roll? How about sausage? Or even bacon? Maybe it’s because pork roll looks gross, kind of like bologna. For those of you who have never seen pork roll, this is what it looks like: 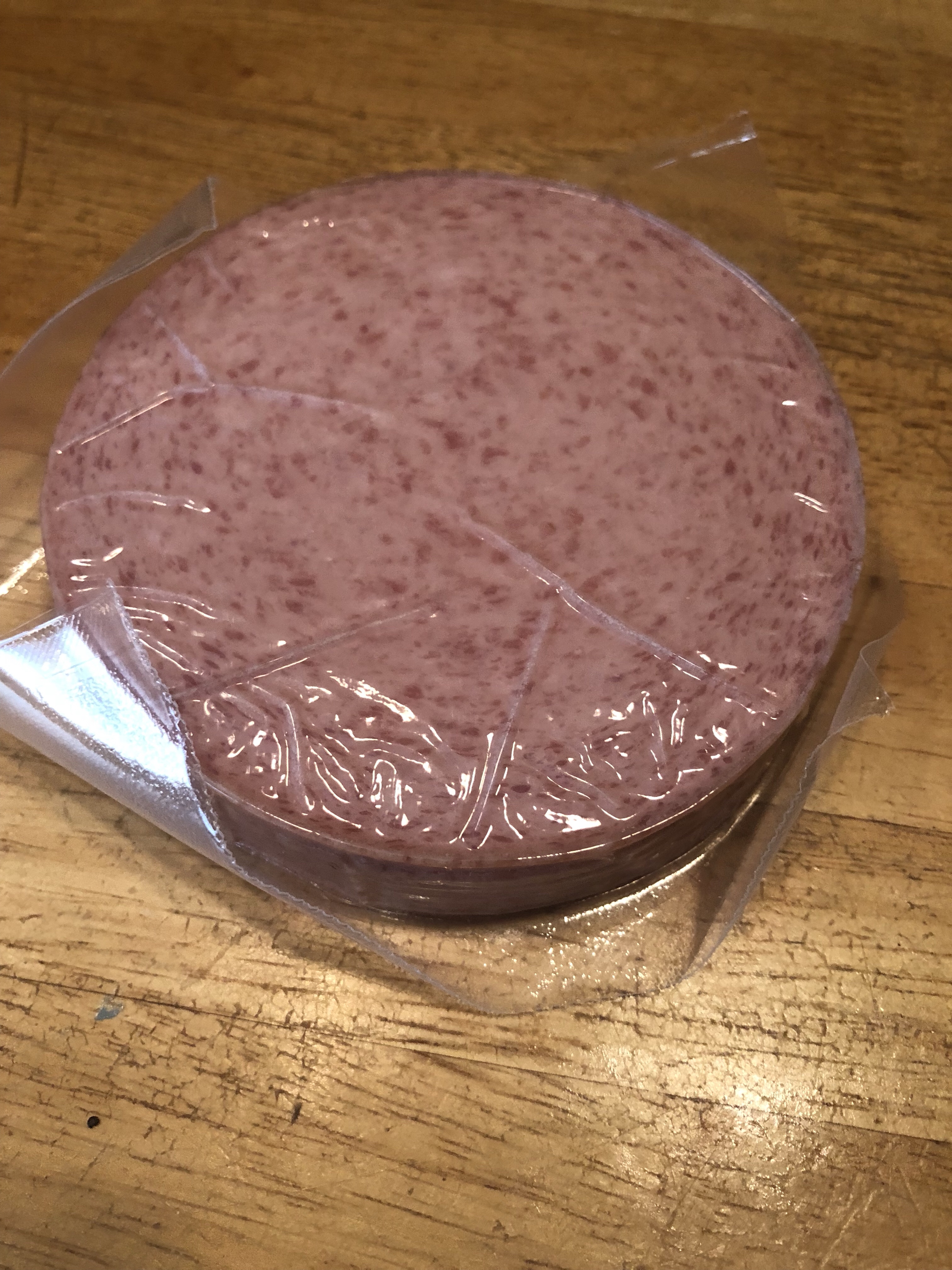 Really not too appetizing, right? Can you really blame me for not trying this sooner? But the hubby and kids love this stuff, so I figured I would buy the ingredients to make them pork roll, egg, and cheese at home. And maybe, just maybe, I would try it.

I woke up at the butt crack of dawn on a school day to make them this breakfast (I’m not sure what was wrong with me). My son has been refusing to eat breakfast before school for years now, and then when he comes home, he eats as if he has been stranded in the desert for a month. Force feeding him breakfast was going to be a challenge, but I had a feeling he wouldn’t be as hungry all day long if he ate.

My daughter usually doesn’t eat breakfast either, but it’s only because getting her out of bed is the challenge. (We have to leave for school at 7:50 and some days she’s just getting up at 7:45…I am not kidding or exaggerating at all.) She’s tired and mopey and listless all morning—I was thinking that not eating could have a lot to do with it, thus my decision to try making breakfast for them.

So I get up bright and early to be a good mother for once and make the kids breakfast. I’ve made eggs and bacon and waffles all the time, but I had to google how to make pork roll. I’m not kidding. What am I supposed to do with this? Eat it raw? Microwave it? This package was useless! Plus it stated that the pork roll was thin sliced—I beg to differ: 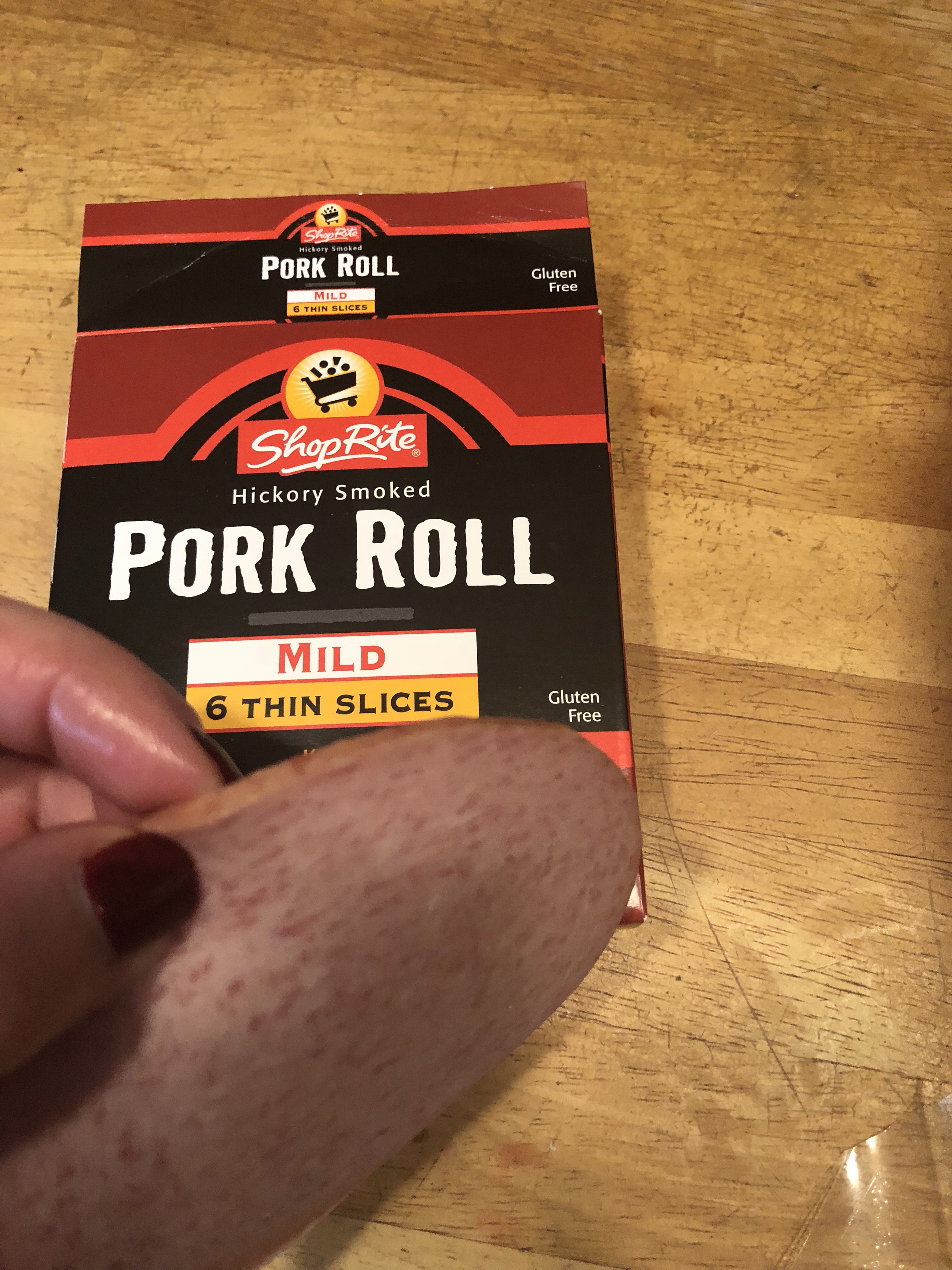 If that looks thin to you we can’t be friends. I like my meat paper thin. I flip out at the deli counter if I can’t see through my cold cuts. THIS was not my definition of thin.

With a little googling, I found an article and a You Tube video on cooking pork roll. The article said to score it on the sides to prevent it from curling up. I had to look up what that meant. Yes, I did, for all you cooks out there rolling your eyes. I am not a cook. I don’t understand basic terminology.

Google laughed at me this particular morning and sent me on a wild goose chase for the answer. “Scores” of articles on the Taylor Ham vs. Pork Roll debate popped up. Seriously, people? This is what I have to scroll through when I’m in a meat crisis at 6:45 in the morning? The clock is ticking! 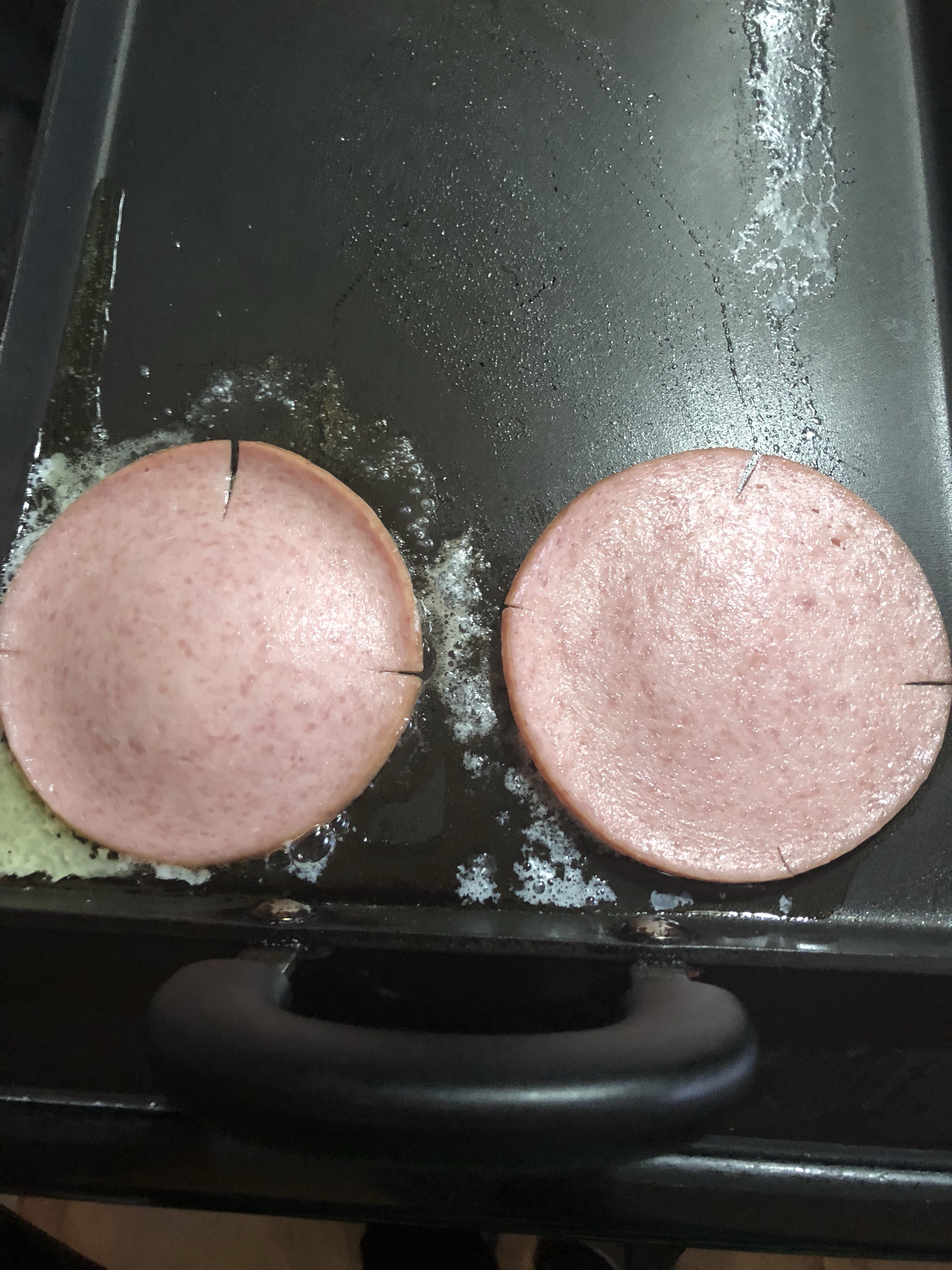 I probably didn’t score it enough because the sides did curl up. And one side burnt. I had to try to scrape the burnt part off and hide it from the kids. They hate anything that is “crispy”. *Sigh*

The eggs didn’t cooperate either. I used my Pampered Chef egg maker microwave thingie, like I do every morning, but instead of sunny side up eggs, I tried to scramble them since the kids don’t like runny eggs (they seem like picky little bastards, don’t they?). 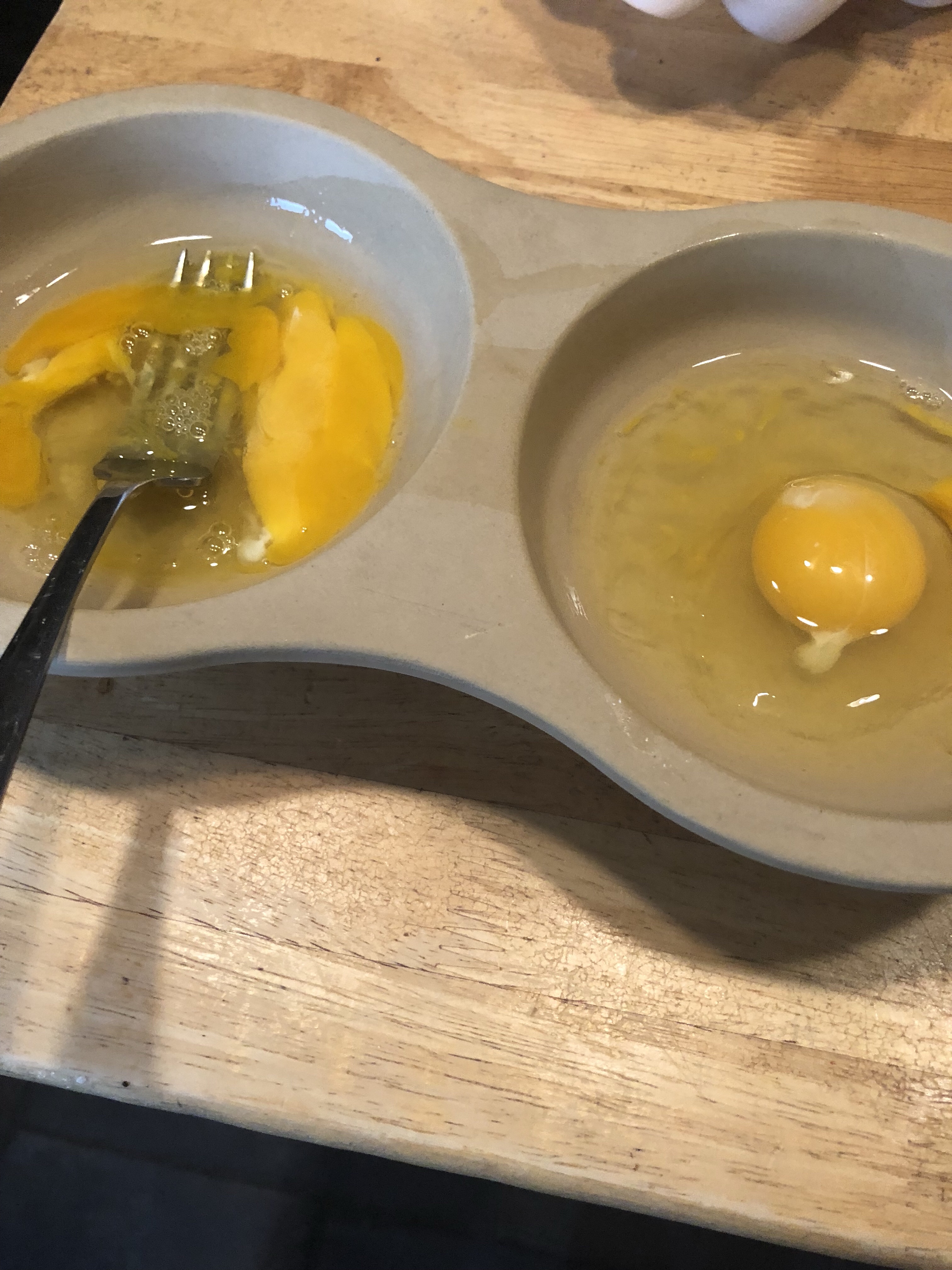 The result was not fluffy scrambled eggs like I anticipated—they were liquid-y on the top and I had to drain them. This became way too complicated for an “pre-coffee” activity.

I guess I should be thankful that I didn’t cut myself with the bread knife or burn myself on the toaster oven. Despite the mishaps, I think the PECs came out pretty good. That’s Pork Roll, Egg and Cheese for you non-deli speak people—some places it’s TEC…Taylor ham, egg and cheese. *Sigh* 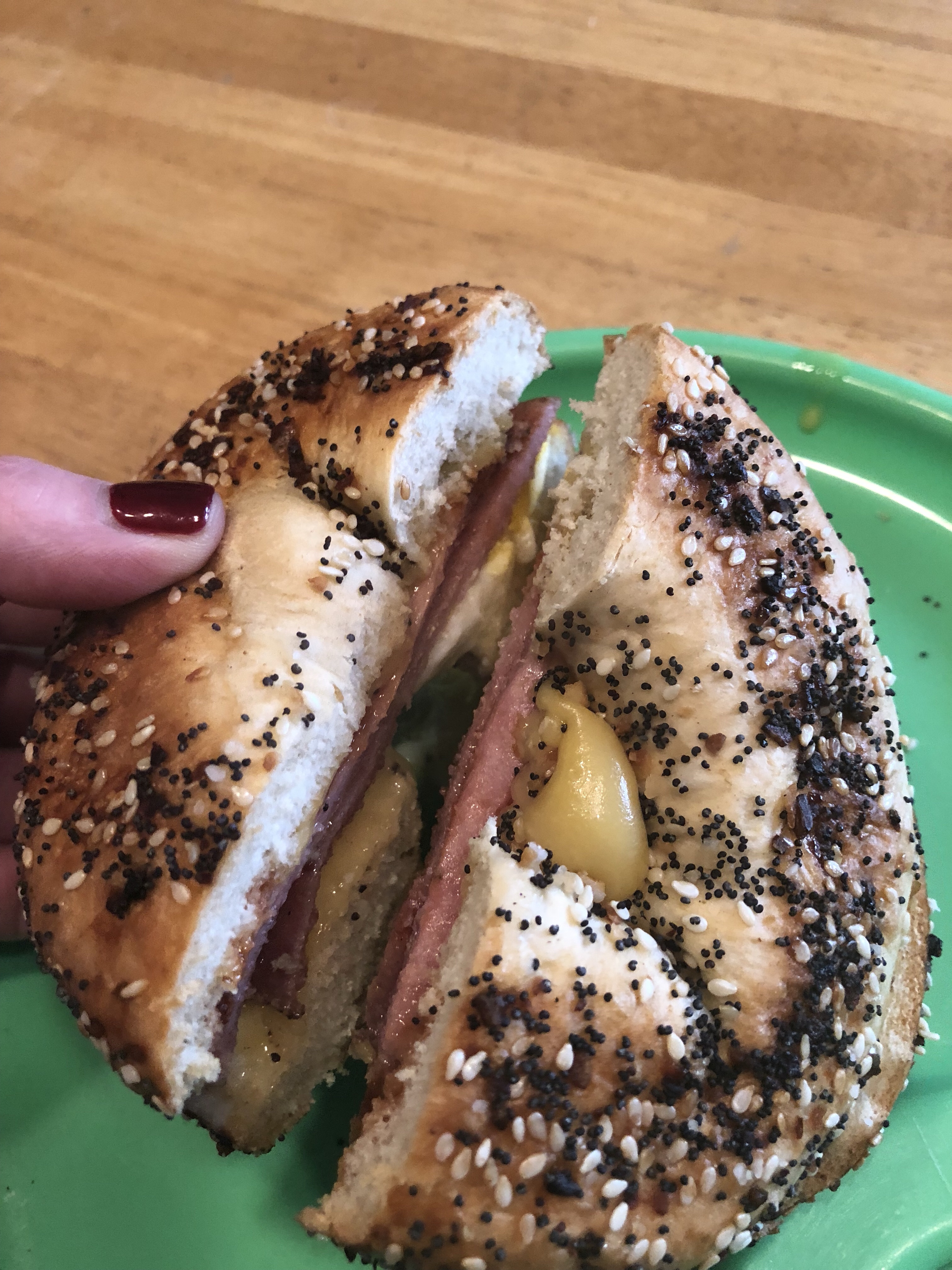 My daughter gobbled the whole thing without a word. The boy poked at his sandwich, complaining about everything under the sun, including the fact that the sun wasn’t actually up yet and it was too early (despite the fact that I literally woke him up 4 minutes earlier than I normally do). The pork roll was too crispy, the bagel was too hard, the eggs were too wet, whatever that means.

He left most of his sandwich looking like it had been the subject of Gordon Ramsey scrutiny. I didn’t have time to make myself a whole sandwich before I had to go to work, so I just ate a random piece of pork roll that my bratty child had discarded. It wasn’t as crispy as I expected (unlike the kids, I like crispy) and it was a little chewy. A cross between bacon and ham, which makes sense, I guess.

Anyway, maybe next time, I’ll get up early enough to make myself a sandwich. In the mean time, you can decide for yourself whether it’s pork roll or Taylor Ham.