Skip to content
Bad Mommy Gets Her Life Together Getting Uncomfortable
By Badmommy February 4, 2019April 16, 2019
FYI...my posts may contain affiliate links. This means that if you click on those links and make a purchase, I will receive a small commission at no cost to you. And those commissions are what makes it possible for me to blog. Thank you!

As I said last week when I weighed in and lost a whooping 4.5 lbs, I’m not going to get too excited just yet. Because I know how this goes. The first week of any “life change” sees big results. The second week, when your body has started to catch on to what you’re doing…not so much.

So knowing this week was going to be an uphill battle, I spent much of it resisting temptation to give in to cravings and lack of desire to work out. I knew my results on the scale were going to be pitiful as it was, I didn’t want to chance gaining weight, even though last week’s results were better than I expected.

And Man…Resisting Temptation Was HARD

A lot of things came up this week that made sticking to my diet and exercise HARD. During the first week, it hadn’t been as difficult to resist temptation because it wasn’t so in my face as it was this week. This week my daughter and I went to the city to see a play AND stayed overnight. That was two days of trying to stick to my eating plan while dining in restaurants, and two days of trying to squeeze in workouts when I had very little time (although the thirty city blocks or so that we walked and the ice skating in Rockefeller Center helped). Still, I stuck to my guns even when I saw there was nothing in the restaurant that we ate dinner in that could even remotely be classified as healthy. I ate a Ruben (I LOVE Rubens!), but I only had half. And I had NO fries and nothing to drink for 2 days but water and coffee. Which was difficult—here we were in Times Square, gorgeous view from our room—37 floors from the ground—and I couldn’t have an indulgent meal and cocktail? And then yesterday was the Super Bowl. The Holy Grail of eating holidays in our house. For heaven’s sake, I’ve even blogged about My 5 Favorite Super Bowl Appetizers. How could I possibly enjoy the game without my favorite foods and the silly drinking games invented by the crazies on the internet???? To get through week 2 was going to be brutal—I knew this going into it. I needed some kind of strategy.

But I Thought About Later Rather Than Now

I didn’t think about that moment when the sandwich was delivered to me. Instead, I visualized the end results. I thought about what my objective was and how sometimes I have to be uncomfortable to get to my goal. A moment or two of being uncomfortable is worth it sometime if a goal is important. In the past, my goal of getting healthier hasn’t been as important as it is to me now. That’s why I’ve failed in the past. When I thought of it in those terms, then it was easier to push away the second half of that sandwich and resist buying a cocktail at the theater (the fact they were $21 apiece didn’t hurt either). As far as the Super Bowl went, I went about my day knowing I was going to make some “not so great” food choices at dinner time. All day, I ate like I normal do, worked out like I normally do. Then I only had SOME of those “not so great” choices later on. Resisting temptation wasn’t as painful as it could have been because I only made a few foods, not a ginormous spread like usual.

My Stomach Probably Shrunk a Bit Which Helped Big Time

In fact, I was only able to stomach a handful of guac and chips before my stomach told me to stop, And as far as the drinking games went, I refrained, relying on the game instead to entertain me. I think I picked the wrong Super Bowl to not play a drinking game during. I’m pretty sure it was the most boring one I’ve ever watched. And the commercials weren’t even that great. What happened to funny commercials? Did the funny people run out of money??? If it wasn’t for Adam Levine ripping his shirt off at halftime, I think I would have fallen asleep.

I Had a Breakthrough Too

Through this difficult week, I realized that much of my eating and enjoyment of cocktails is based on routine and…comfort. It’s all mental—an emotional attachment to the food and drink that leads me to believe I can’t enjoy myself the same way I would if I let myself eat or drink whatever I wanted. I read some articles on emotional eating and they kind of opened my eyes. I never thought of myself as an emotional eater because I didn’t “Eat my feelings”. In the past, I never used food as a comfort when I was stressed or sad, rather, I use food as a backdrop to happiness. Food is, and always has been, the centerpiece of my experiences. Like, Hubby will ask “honey what do you want to do tonight?”. And I’ll respond, “Oh, let’s try that new restaurant!” or “I’ve been dying for a quesadilla.” So I stepped out of my comfort zone this week and tried to enjoy doing things without those foods and drinks around me. I shifted my focus away from “how can food make this better” and onto the moment, enjoying what was going on, rather than what I was eating. Watching the play, going ice skating—not wondering about how I was going to round out the experience with food. Resisting temptation became a little easier once I reframed my mindset.

Still, the Results Were Disappointing

But I’m not going to tell you this was all wonderful and yada yada yada. I was delusional if I thought all my efforts in resisting temptation would be rewarded and I would somehow dodge the dreaded Week 2 curse. Alas, it was not to be: 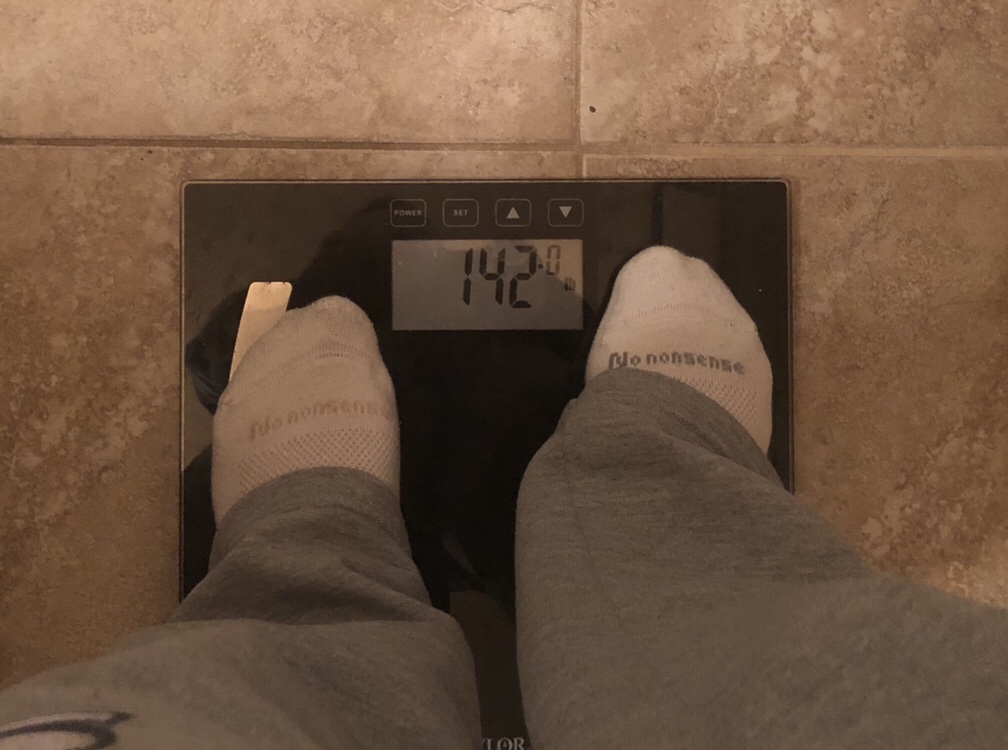 I am down 0.8 lbs from last Monday. Which I guess isn’t too bad, considering all the temptation I dodged this week. AND the fact that it’s Week 2. Still, I was slightly disappointed. Oh well, it only serves as motivation for Week 3. Until next Monday!

Check out my You Tube Video HERE.

One thought on “Resisting Temptation (Week 2)”