Skip to content
The Bad Mommy Cooks
By Badmommy January 27, 2019April 16, 2019
FYI...my posts may contain affiliate links. This means that if you click on those links and make a purchase, I will receive a small commission at no cost to you. And those commissions are what makes it possible for me to blog. Thank you!

Whether or not you watch football during the regular season, chances are, if you’re in the United States, you’ll be tuning in to the big game in a couple of weeks. According to studies, the Super Bowl is the most viewed television event of the year, easily beating out the Oscars and Rockin’ New Years Eve. A lot of people watch it with the hopes their numbers come up on their office Super Bowl pool. Some people watch for the commercials and the halftime show. And others actually watch it for the

I find myself saying that a lot during football games…especially the Super Bowl. I usually miss winning my boxes because of twos safeties or something else completely statistically unlikely. One of my favorite appetizers (and not JUST a Super Bowl appetizer), is guacamole.

I would have never even tried guacamole if it wasn’t for Hubby’s cooking classes. Although I loved tortilla chips, I would usually dip them in that jar cheese sauce that’s probably horrible for you. Okay, I know it’s horrible for you.

But guacamole has too many ingredients I never thought I could eat—red onions and that dreaded cilantro. But the way Hubby makes it nice and smooth, I barely notice those things that I don’t like.

However, this recipe tastes best chilled so I would make it a few hours before. You’ll need 3 avocados, 1/2 c. red onion (chopped), 3 cloves of garlic (minced), a jalapeno pepper (seeded and minced), 1 TBSP of cilantro (chopped), 2 limes(juiced), 2 plum tomatoes (chopped), and salt and pepper.

Scoop the avocados out of their skins and discard the pits. With a fork or potato masher, mash to desired consistency. Add onion, garlic, tomatoes, and jalapeno. Juice the two limes into the mix and stir. Add cilantro, 1/2 tsp of salt, and a sprinkle of pepper to taste. Serve with chips. 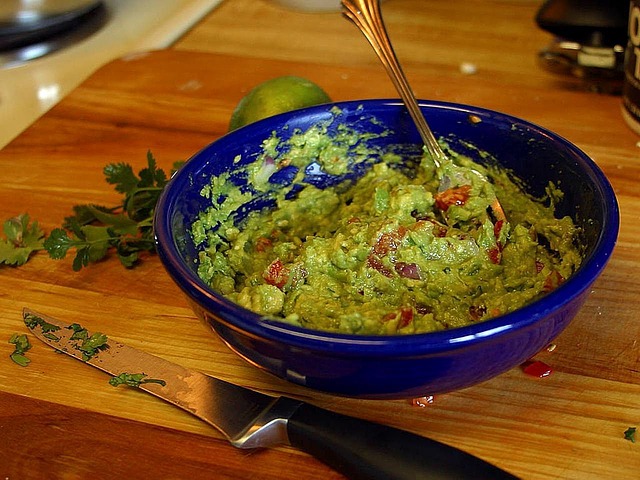 These are one of my favorite Super Bowl appetizers. I made them last year for Super Bowl 52. Hubby was mad at me for the better part of a year because the Eagles won that Super Bowl and he felt it was my fault because I somehow sent them some good juju by making these sliders.

I redeemed myself when I made them again last weekend and the Eagles lost. Apparently, my cooking actually has NO bearing on the outcome of a football game. Who would have thunk? Anyway, this recipe is so SUPER easy that I can basically just show you what to do with pictures:

Slice King’s Hawaiian buns in half. Place bottom half in square baker.
Add cheese to bottom buns (The first time I made these, I didn’t do this and it made the bottom buns soggy—adding cheese to the bottom buns definitely helped with the soggy factor: 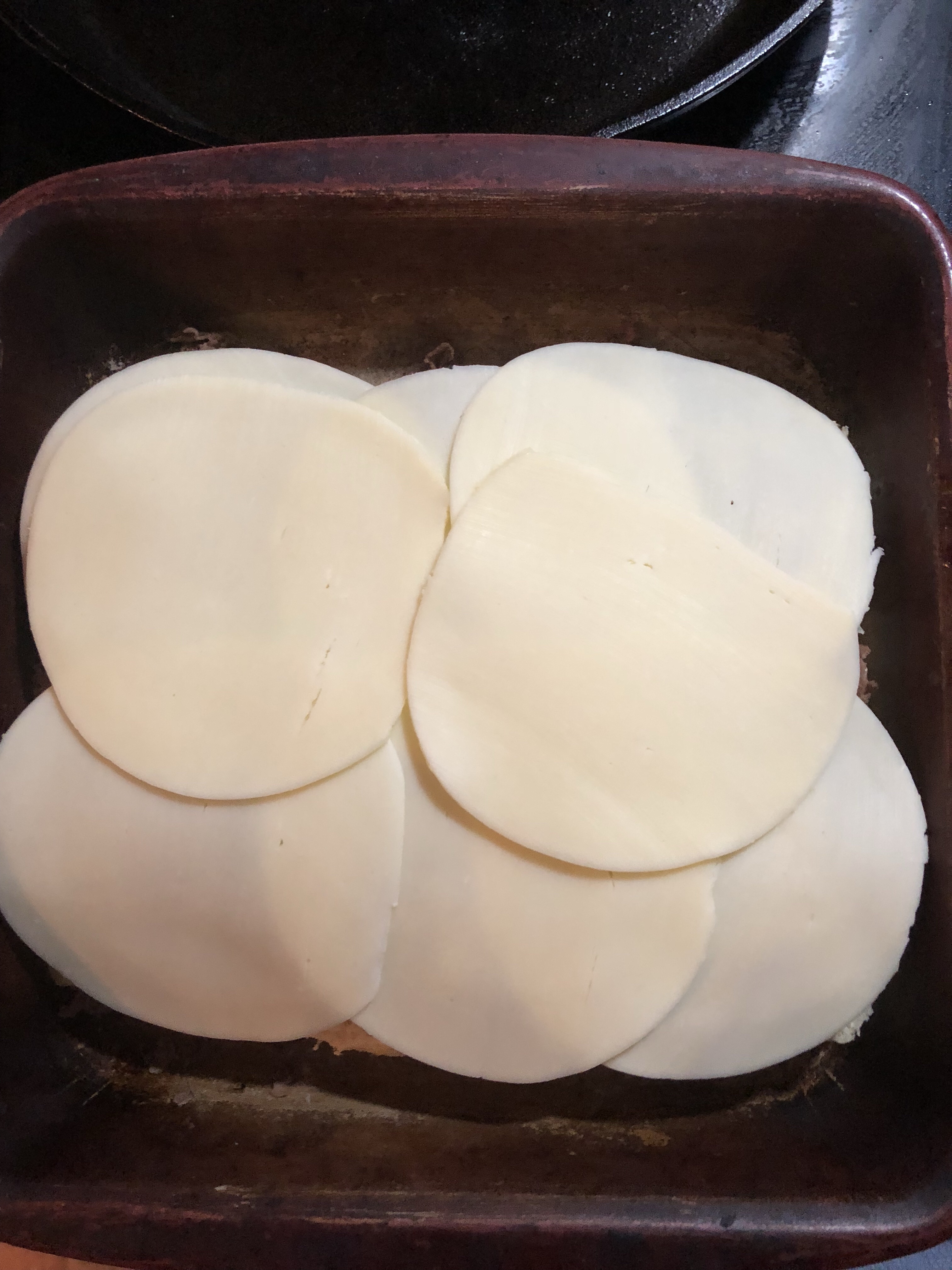 Saute a chopped onion in 2 TBSP of butter: 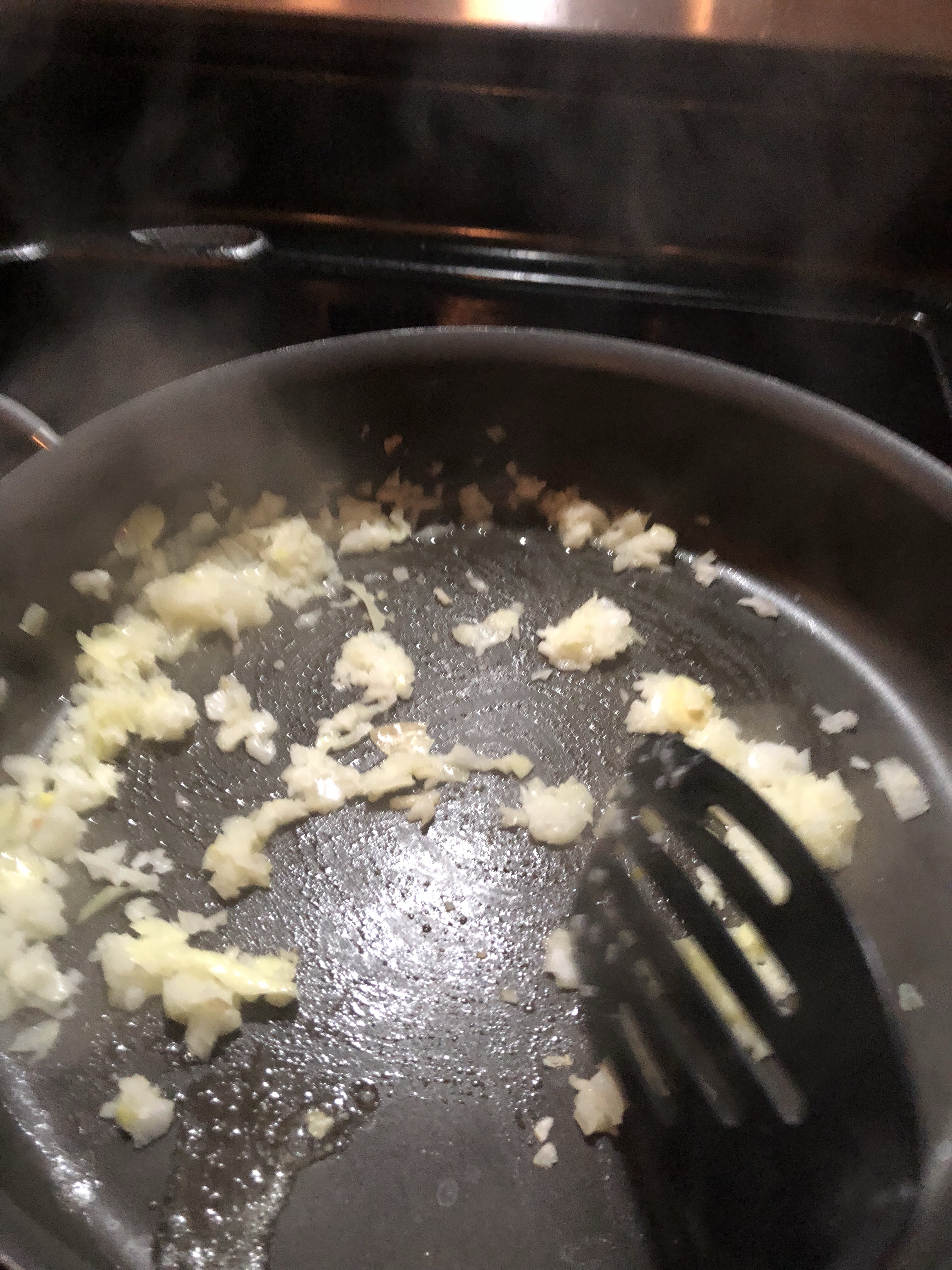 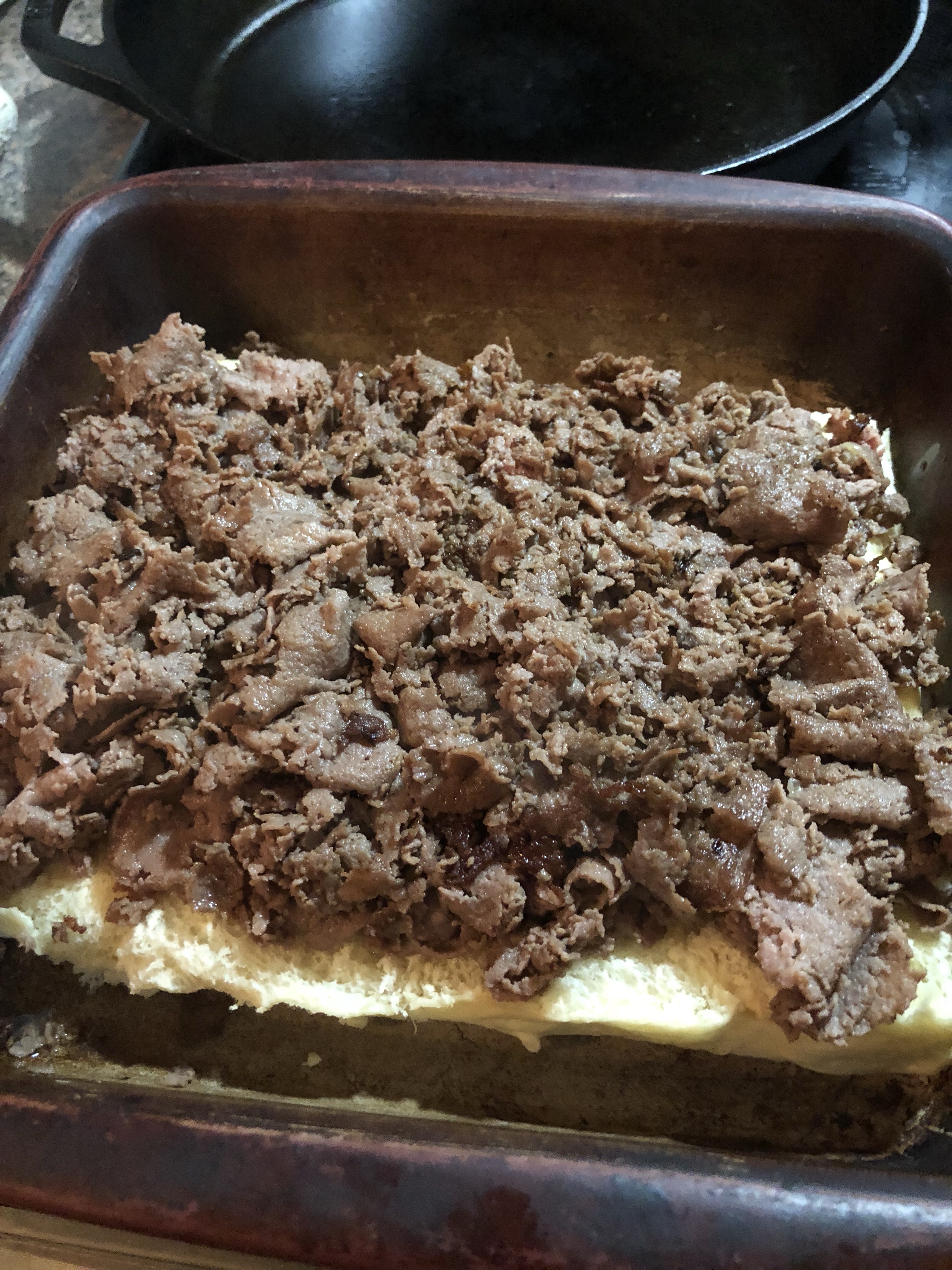 Then add the onion. I only put onion on half because half of us wanted onion and the other did not. If you do this, make sure you make it clear what half has onions (I didn’t do this and it was a little difficult to tell once it’s all cooked.): 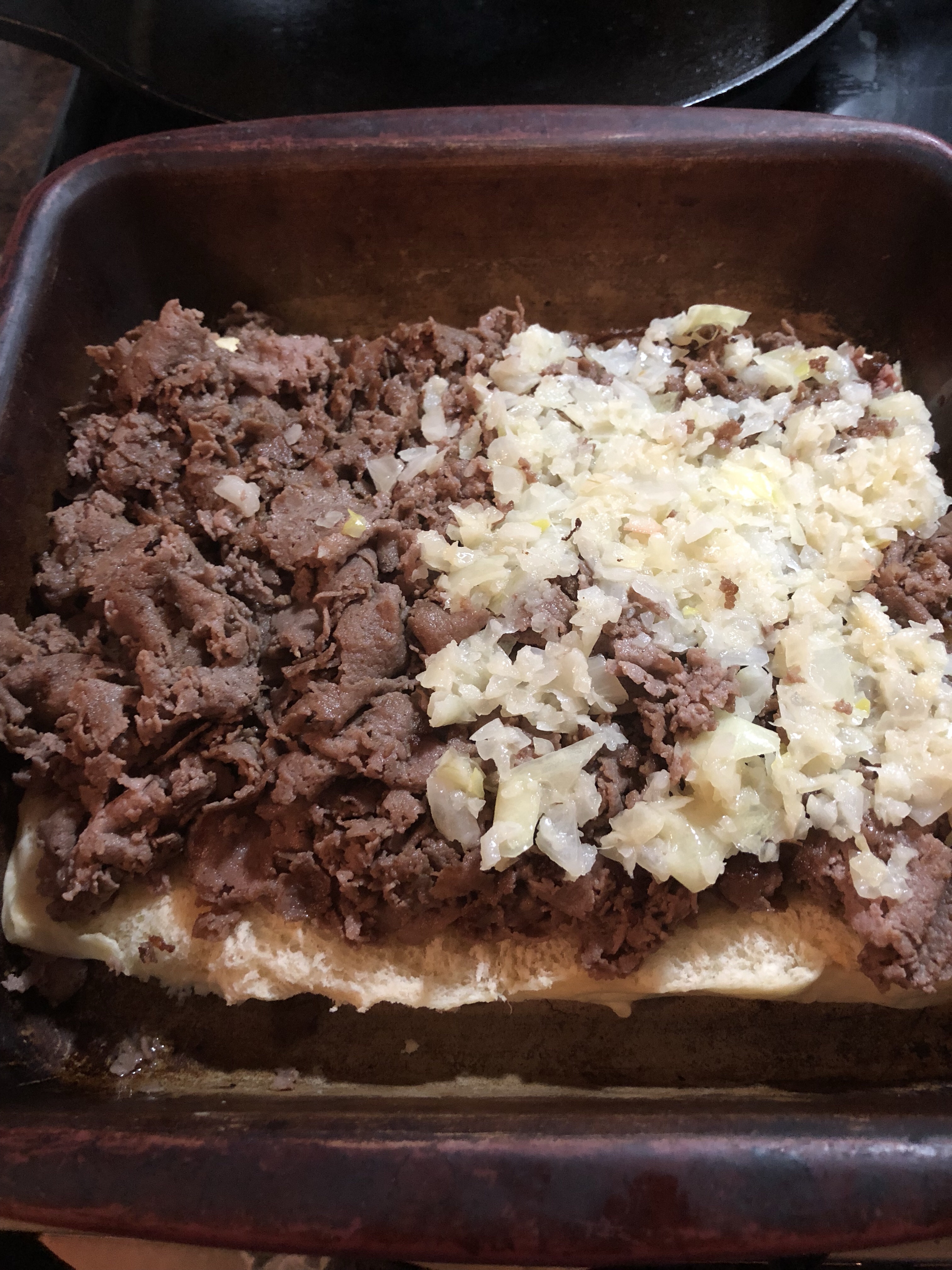 Add another layer of cheese: 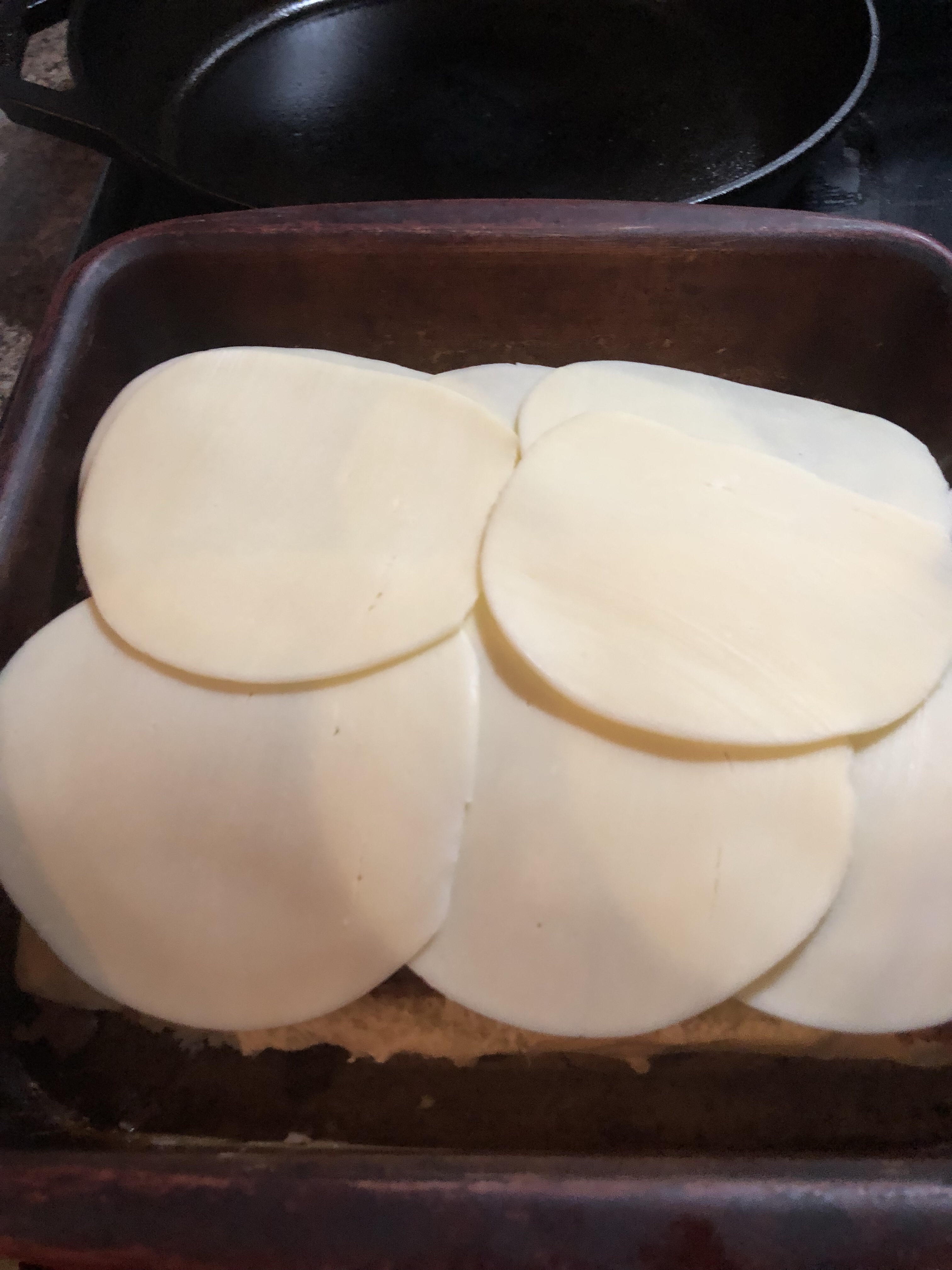 Put bun tops back on, brush with a little melted butter, and bake on 400 for about 10 minutes or until provolone is completely melted. 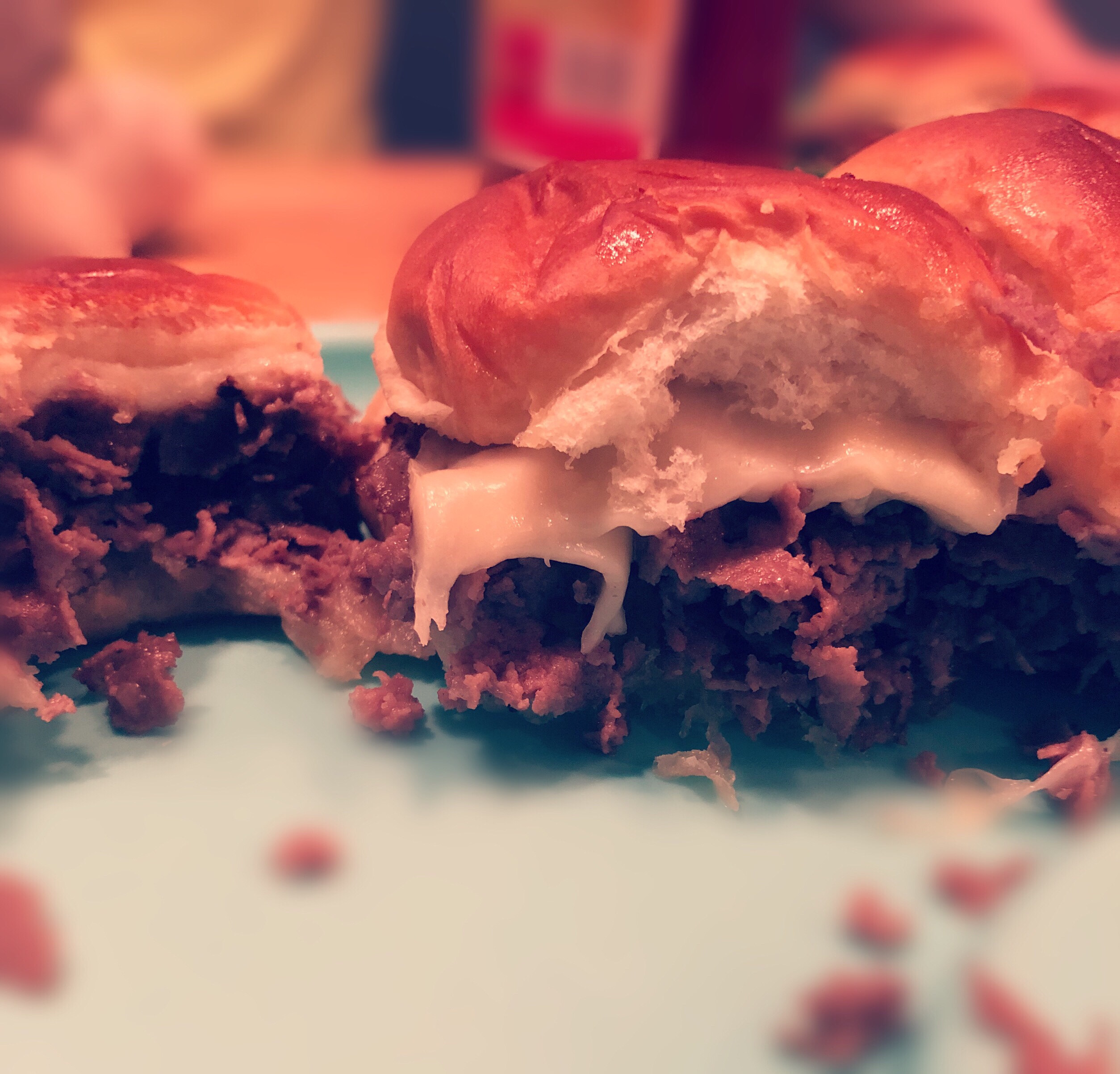 There is one more step…grab some napkins because these Super Bowl Appetizers are messy…but DELISH!

So every recipe I’ve ever tried for loaded potatoes in the past…sucks. The potatoes are never cooked right and end up being too hard. Well, for these Super Bowl appetizers, I decided to try a combination of potato chips in the air fryer and loaded potatoes.
I sliced the potatoes THIN and air fried them for 5 minutes (just until they began to curl up on the ends and brown). Then I added the cheddar cheese and bacon crumbles and cooked for another 5 minutes. These ended up PERFECT—perfectly cooked and not greasy at all! They were gone in minutes: 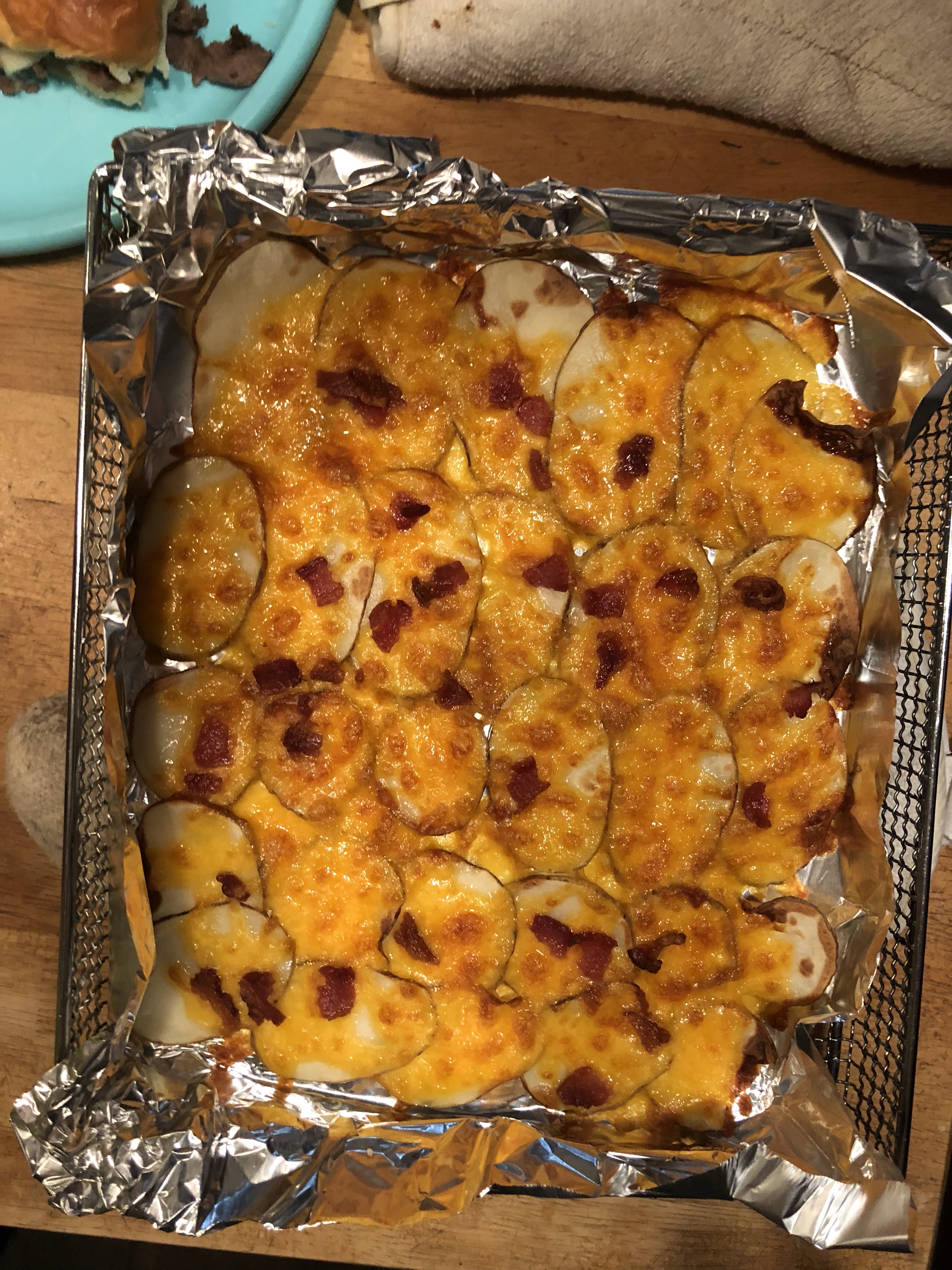 Hubby made these for the Championship game weekend. It’s a good thing these wings were so good—it helped distract him from the fact he accidentally bet on the wrong game. Oops. (He would have lost his bet anyway.)

He first rubbed the wings down with a dry rub of salt, pepper, garlic powder, onion powder, dry mustard, paprika, and chipotle pepper powder. He then baked them in the convection oven for about 30 minutes.

Meanwhile he made the sauce using a TBSP of Sriracha sauce and 1/2 c. sweet chili sauce, and 1/2 c. honey BBQ sauce. (Double the sauce if you need more.) He brushed the wings with the sauce and finished them off in the air fryer for about 5 minutes. So simple, yet this Super Bowl Appetizer was the best thing about the games this weekend. 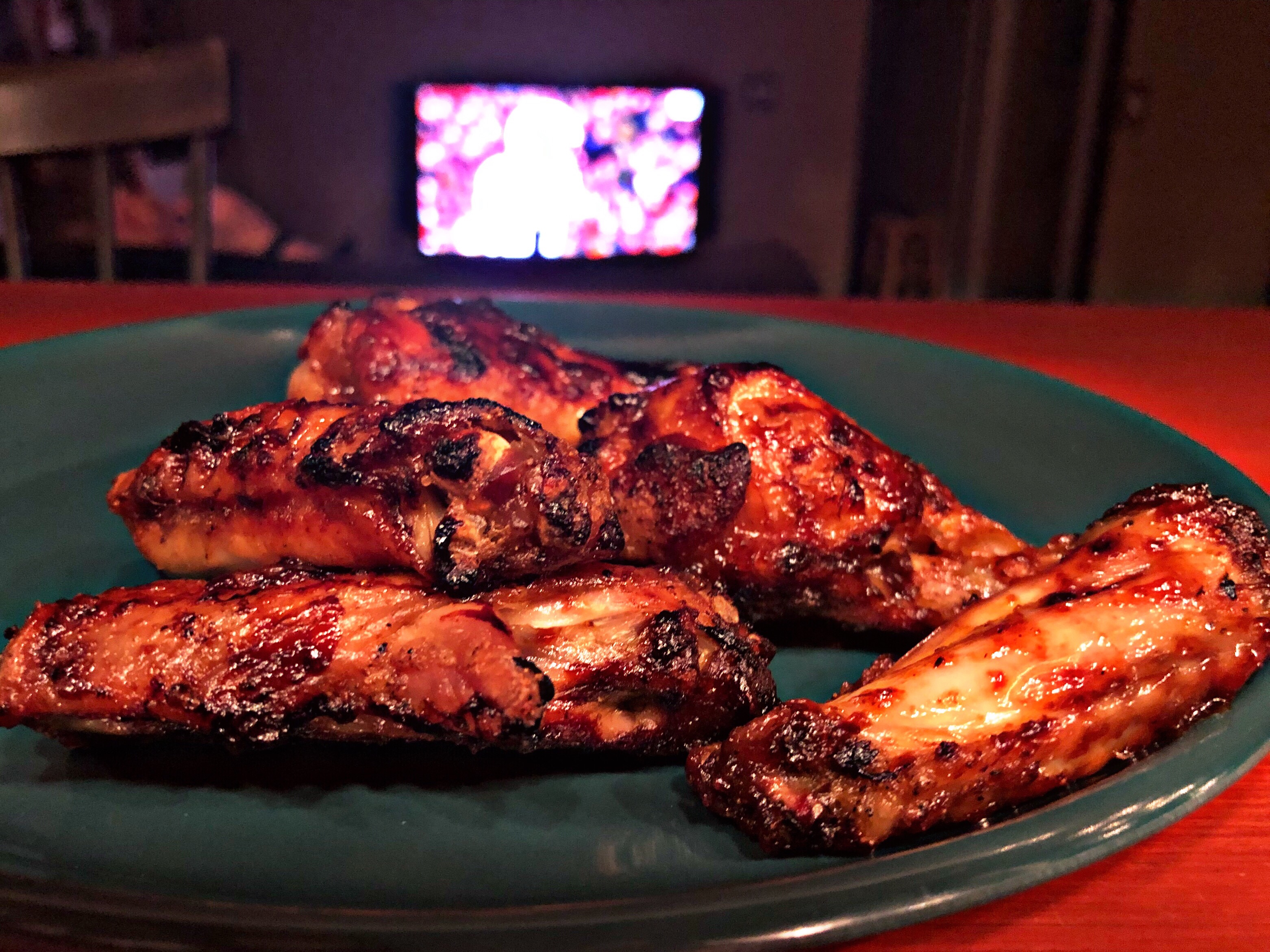 This is one of my favorite things to make, period. Not just as a Super Bowl appetizer, but in general, for any time we need a quick and fail-proof appetizer—Christmas Eve, New Years, Tuesday…whatever. This is usually gone in less than 10 minutes.

Actually on Christmas Eve this year, my two loaves of Stromboli were gone within 7 minutes of cutting them. My kids and nephews are animals when it comes to this simple, yet tasty appetizer.

Start off by rolling out the dough. If you don’t want to make your own, your local pizzeria can sell you a ball of dough. (Seriously, don’t make this harder on yourself. Just get a ball of dough from them.)

Add shredded mozzarella and then pepperoni. Roll it up (by the longer side), and brush with olive oil and pepper. Cover with foil and bake at 400 for about 25 minutes. Then remove foil cover and bake until golden brown and cheese is melted (about another 20 minutes). 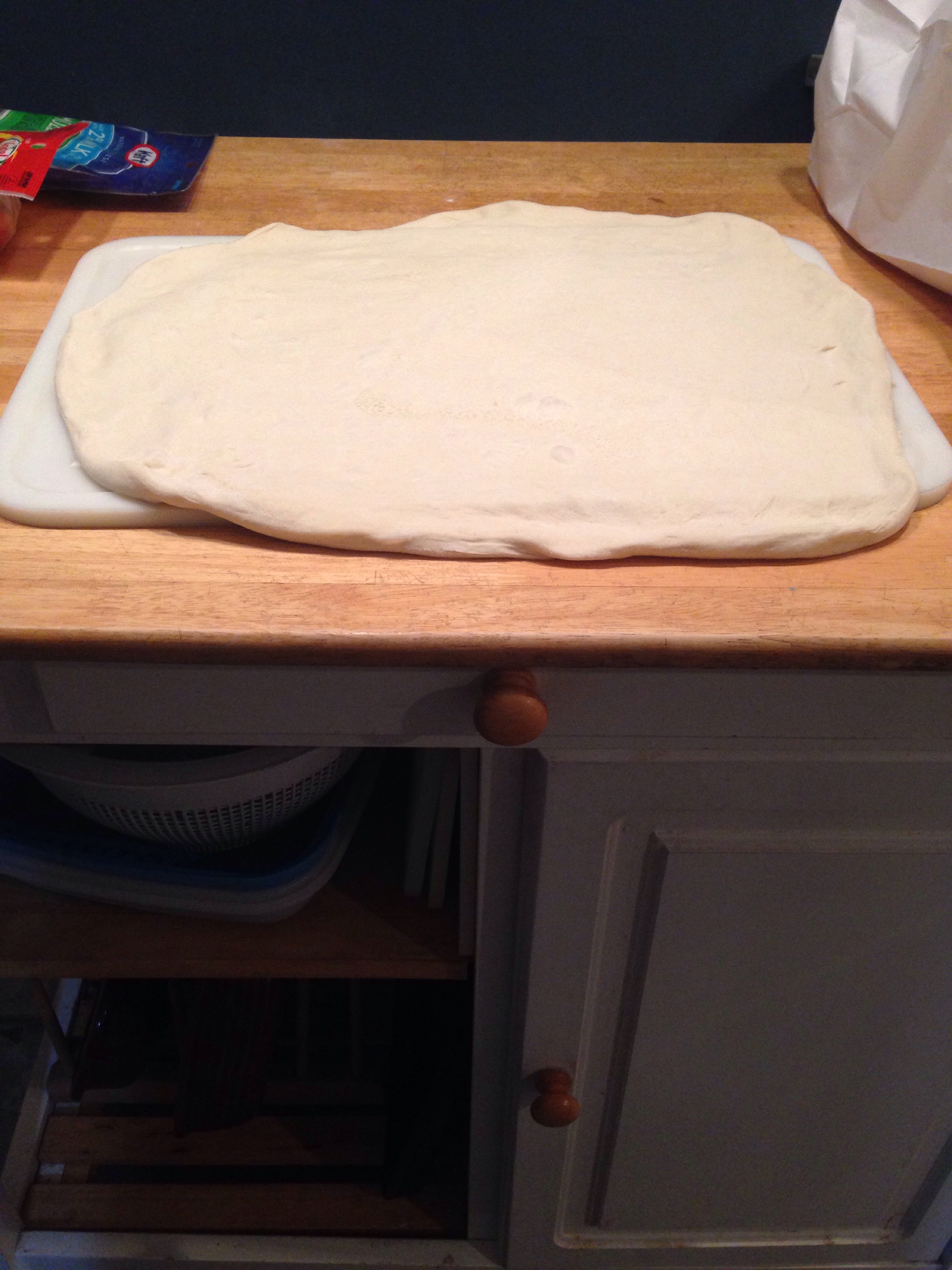 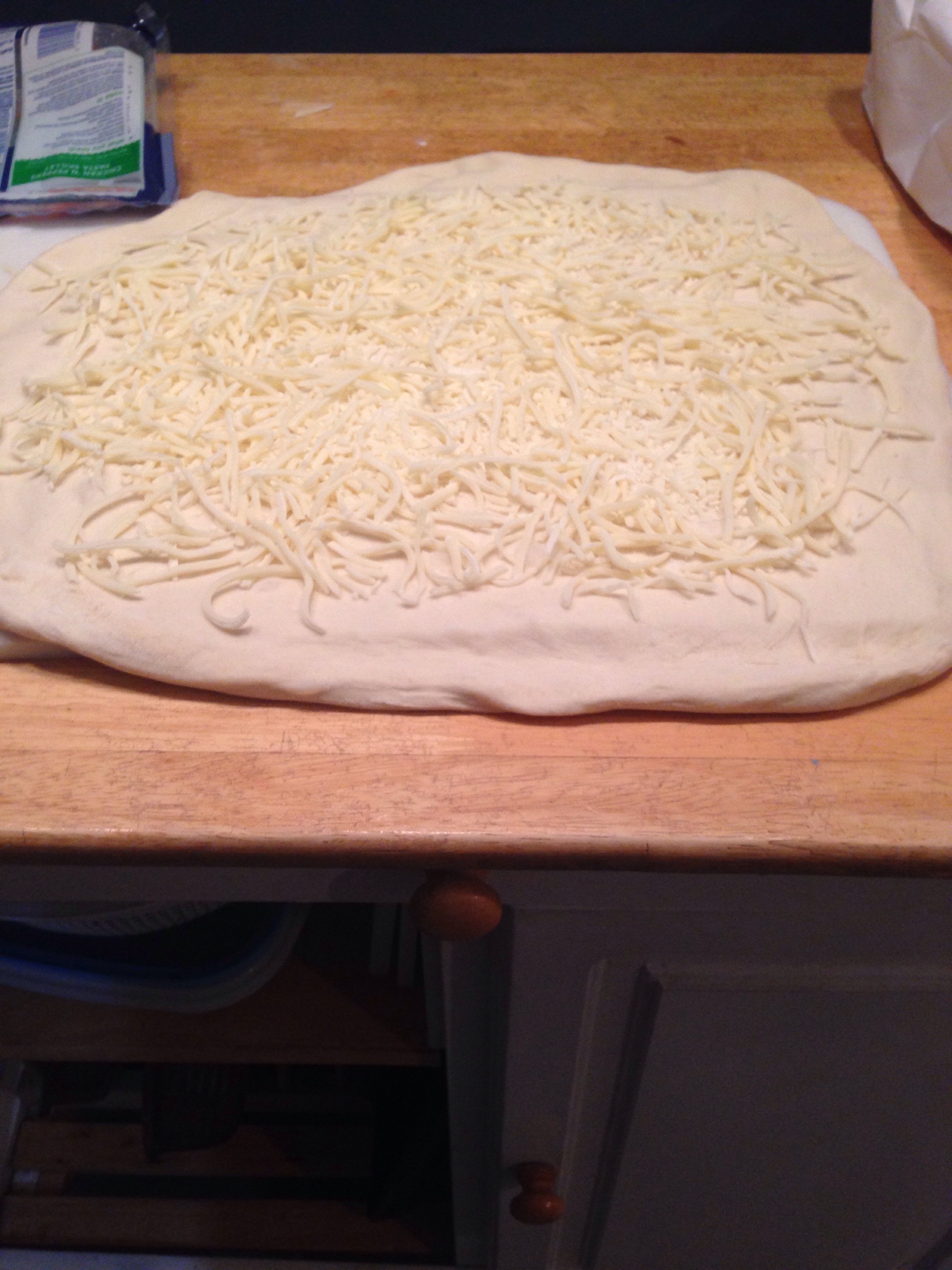 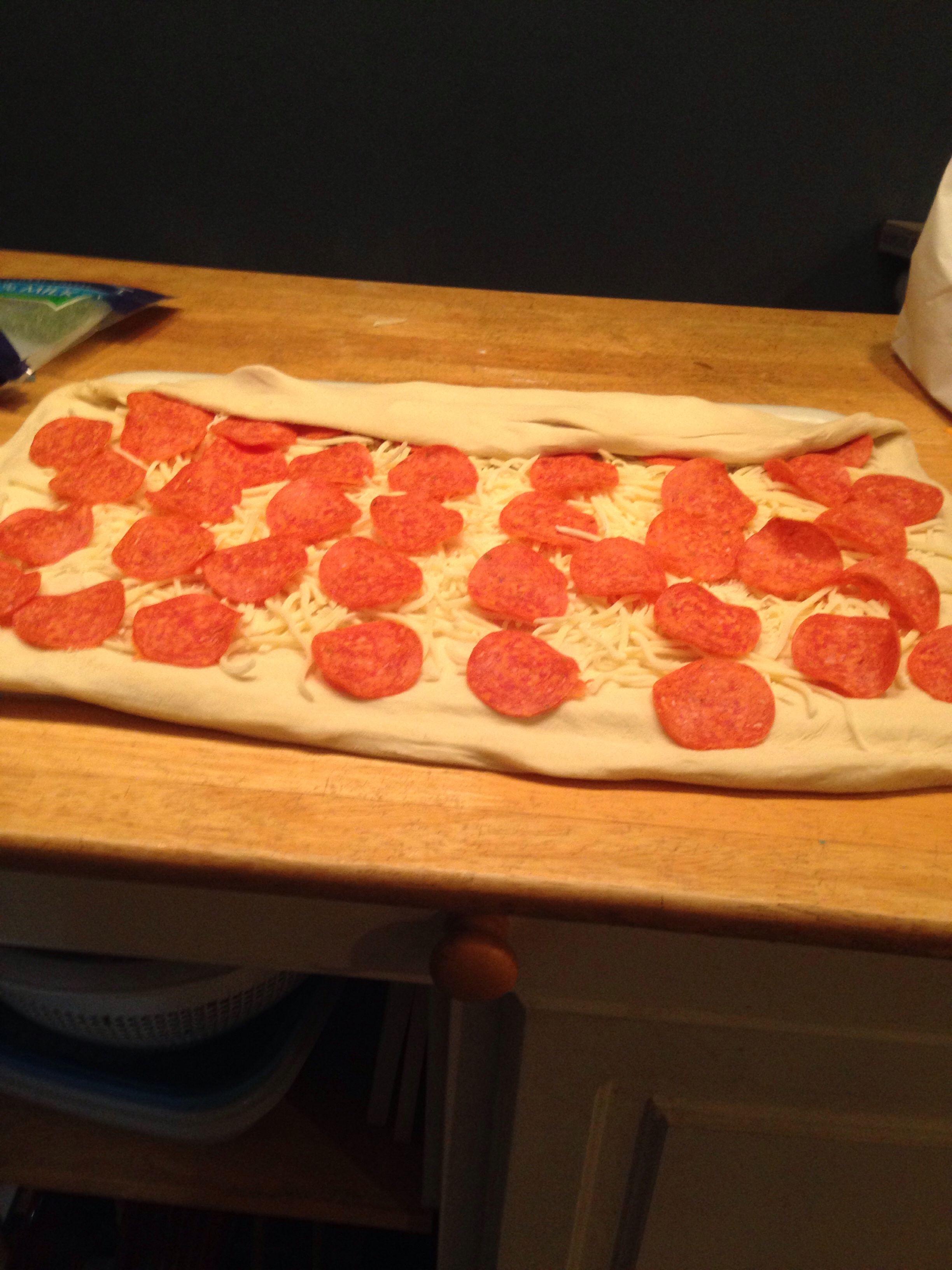 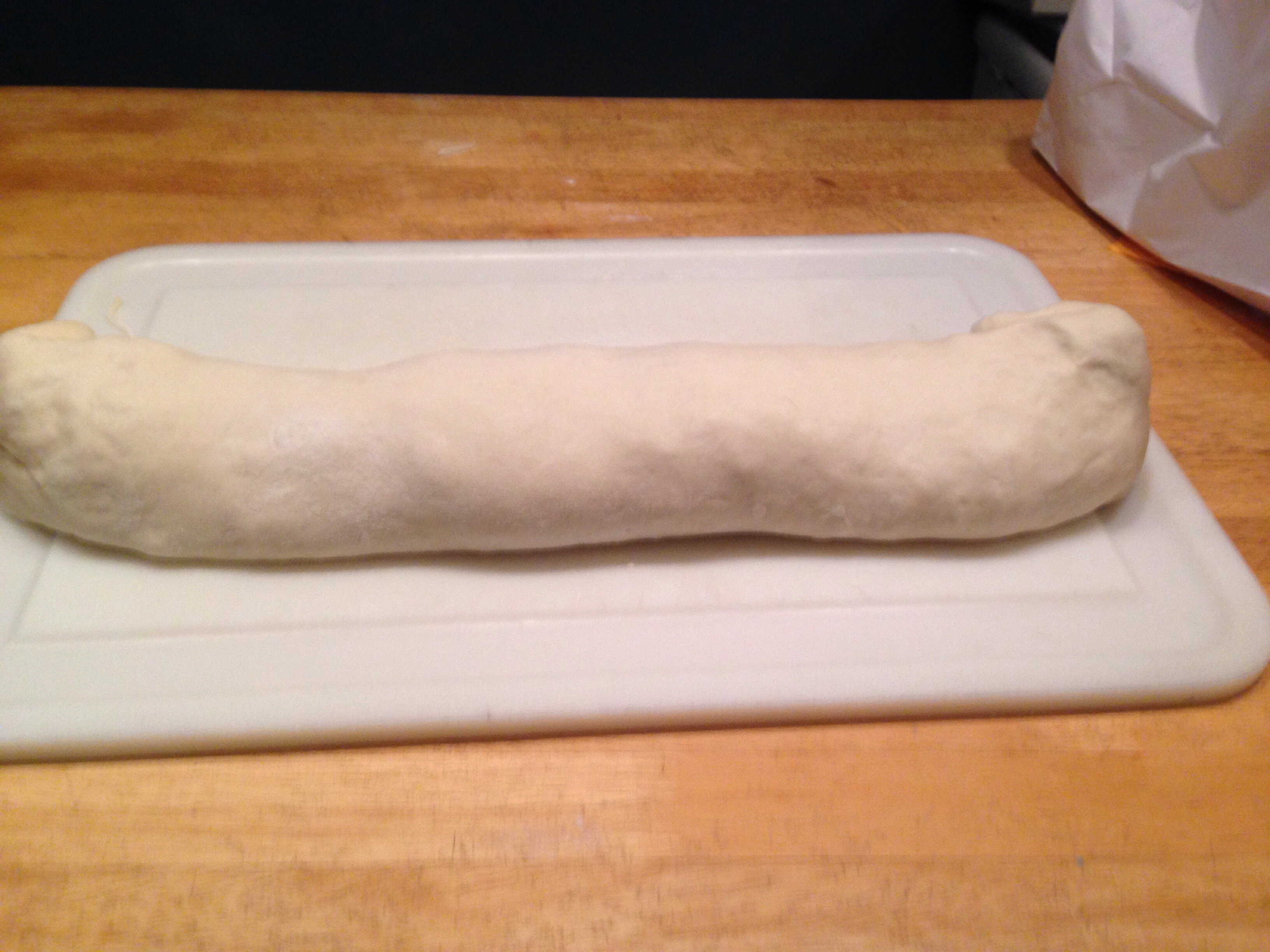 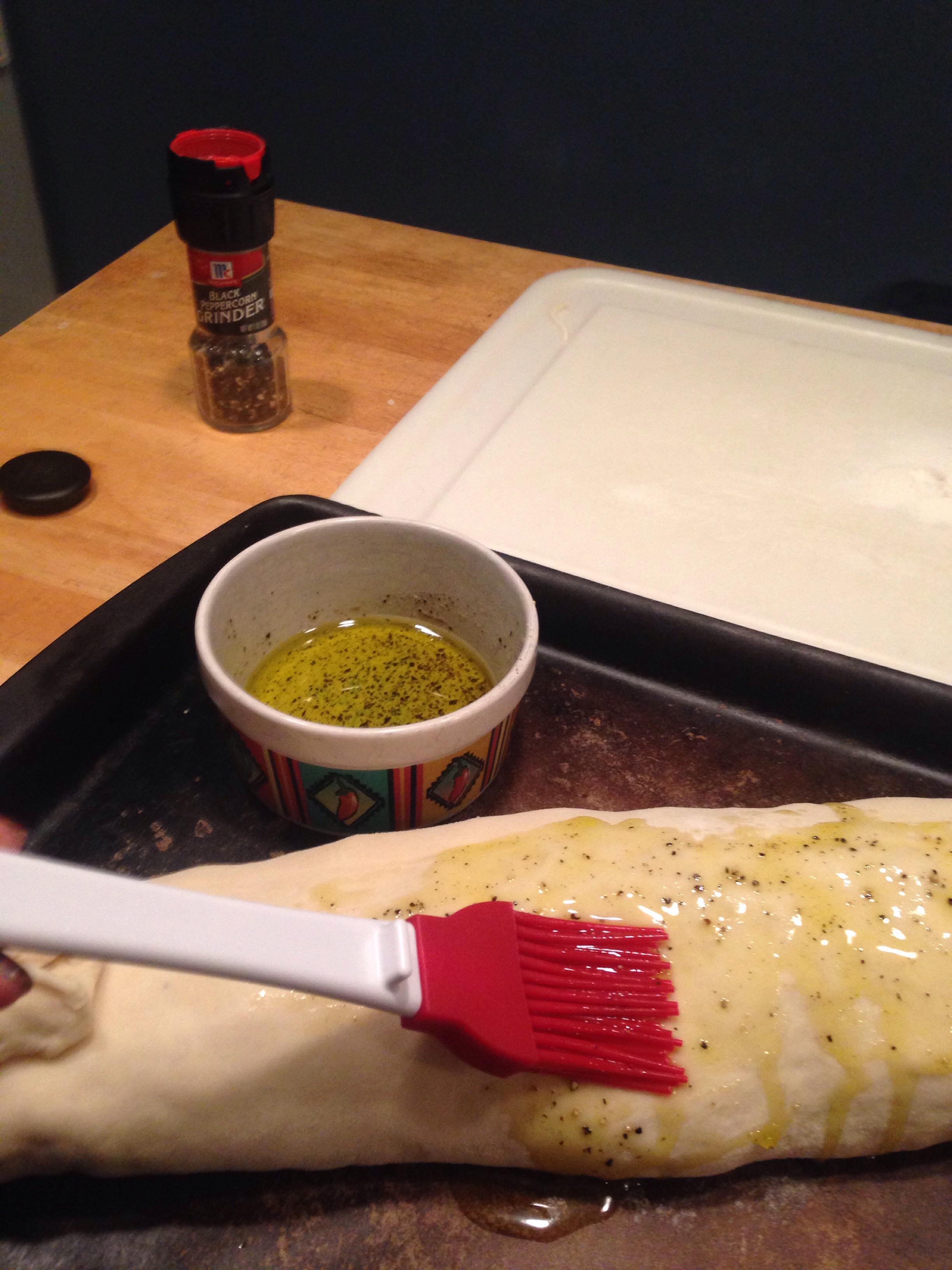 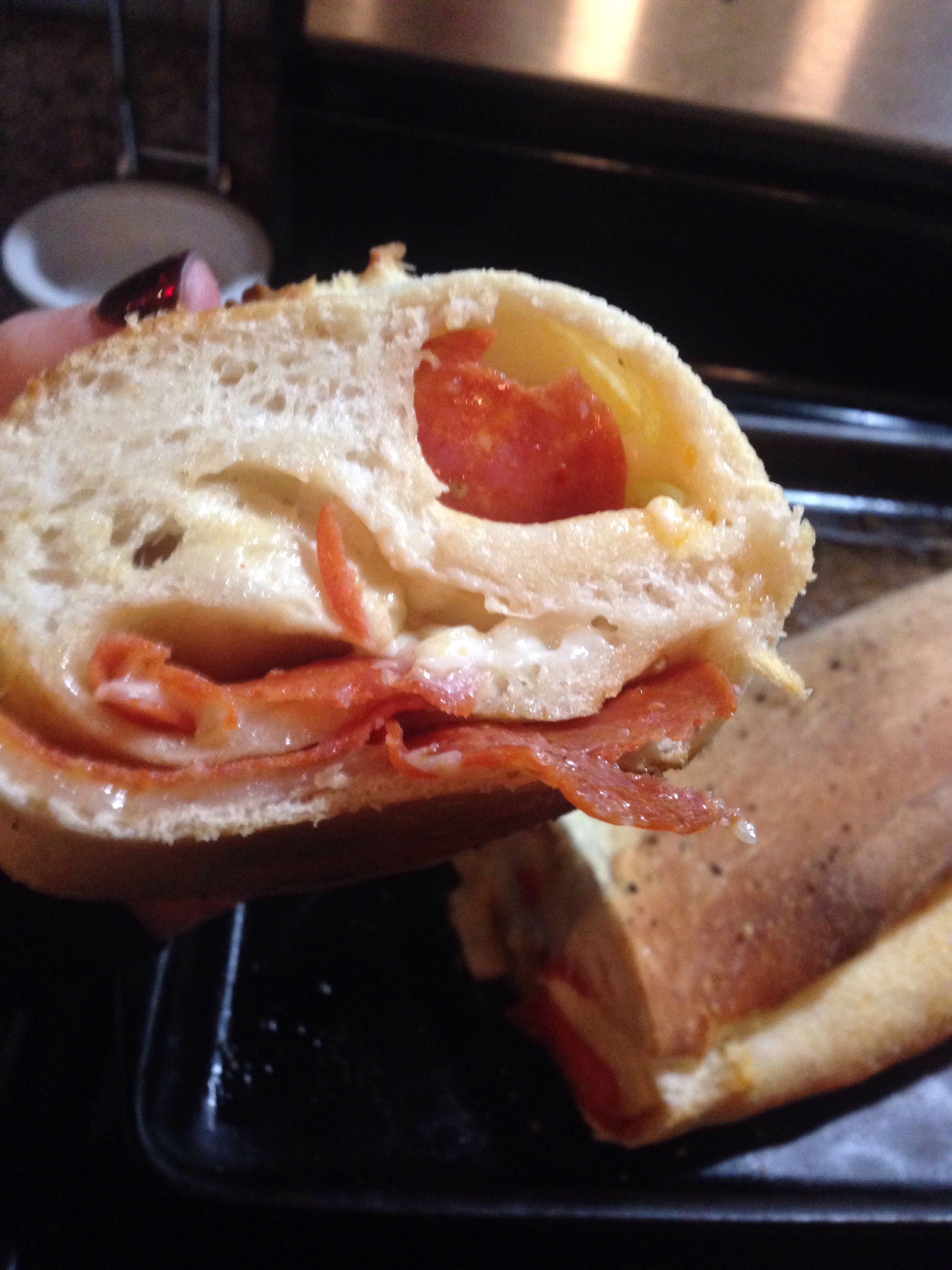 Let me know in the comments…what are YOUR favorite Super Bowl Appetizers? I’d love to try something different next year!