Skip to content
The Bad Mommy Cooks
By Badmommy February 3, 2018April 18, 2019
FYI...my posts may contain affiliate links. This means that if you click on those links and make a purchase, I will receive a small commission at no cost to you. And those commissions are what makes it possible for me to blog. Thank you!

Tomorrow is Super Bowl Sunday! For those of you who live in households like mine and eat, sleep, and breathe football from April till February (yes, we even watch the draft), Super Bowl Sunday is something of a major holiday.

In fact, my husband was more upset about the prospect of working Super Bowl Sunday than he was about working Christmas and Thanksgiving. I bet you are all very happy to know…he’s off. Whew…dodged a bullet on that one (insert eyeroll here). You know how the seriously the Pearson family takes Super Bowl? This is Us (literally). Although, we will not be using a slow cooker in this house tomorrow… (cue sobbing from half the population of the US).

In my defense, I had no idea that the Eagles would be in the Super Bowl when I planned the menu. Yes, you heard that correctly. I haven’t decided what we are having for dinner tonight, but the Super Bowl menu is set in stone weeks before. Well, it has to be—I have to try out the recipes before I burn them on the day of the big game.

Hubby was a little concerned that our sliders may actually influence the outcome of the game, so he wants to defrost the New England clam chowder that we have in the freezer as well, as an offering of equity to the football gods. (Insert another eyeroll.) I will not be obliging him. New England Clam Chowder is not high on my list of favorite foods. And besides, that’s as superstitious as the four weeks he went without showering on Sunday because he thought the Cowboys only won on days he didn’t shower (GIANT eyeroll).

We made the sliders a few weeks ago—it was a joint effort because I really hate to chop onions. Actually, I hate to chop anything, but onions are my least favorite. So I enlisted the help of hubby and managed to trick him into making pretty much the entire meal. Well, that’s not true. I melted the butter in the microwave for the buns.

Anyhoo…this is an extremely easy recipe and the results are delicious. If you haven’t decided on what to eat while watching the big game tomorrow, may I suggest these sliders? Seriously, besides the chopping, they were a cinch to make.

After chopping the onions and peppers, you sauté them on the stove. Then you put them aside while you make the cheesesteak in the same pan. Then you place the bottom half of the slider buns in an casserole pan (we used King’s Hawaiian). The recipe said to cover the buns with mayo. I cringed when I read that. Not that I don’t like mayo. I just never had it on my cheesesteaks. I bit the bullet and tried it though and honestly, I didn’t even notice it. (I also smothered it in ketchup like a good red blooded American would, so that may be why I didn’t taste the mayo.)

The next step is layering the buns. First with the cheese steak and then the onions and peppers: 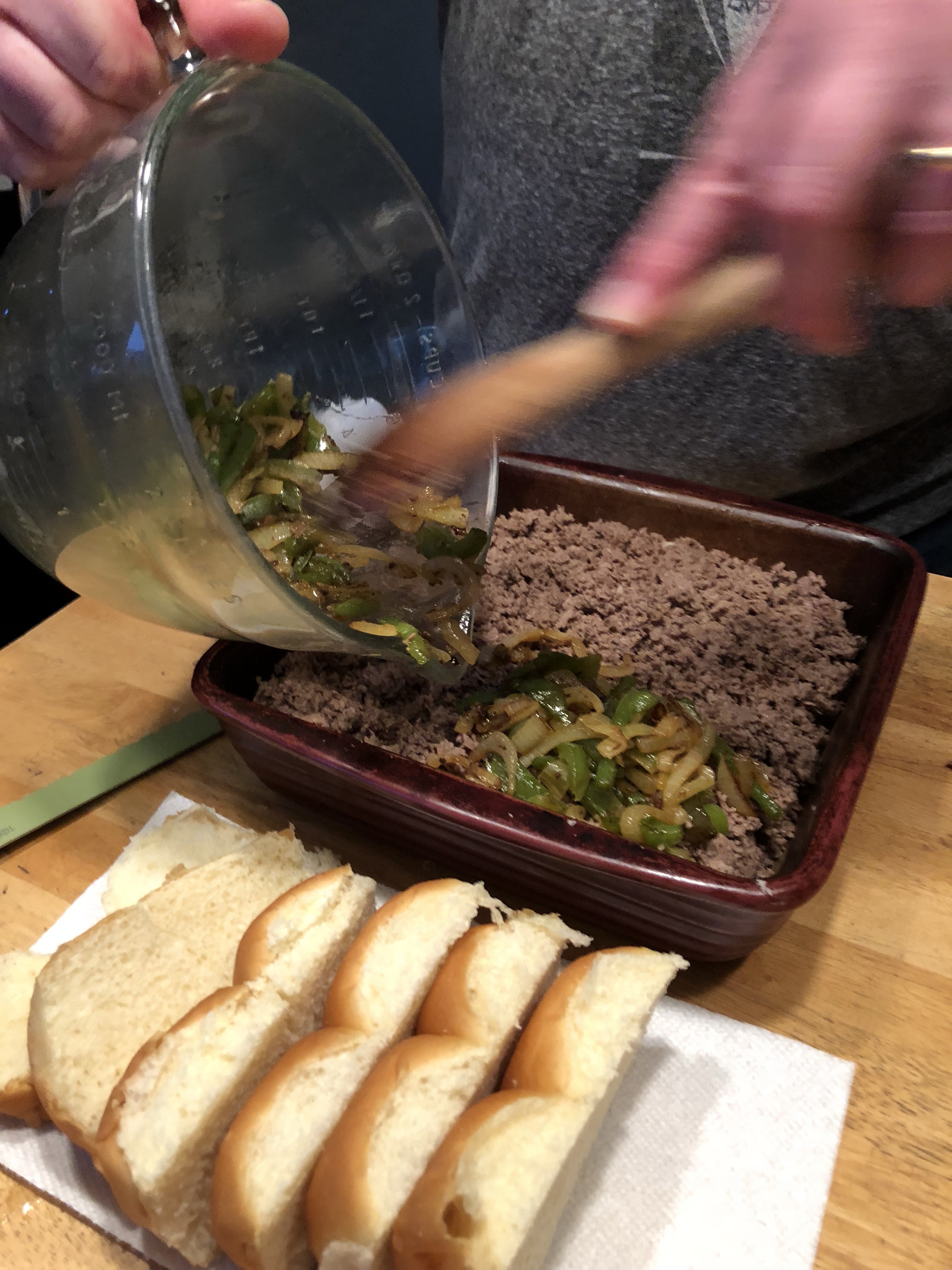 Cover it with a layer of Provolone cheese before putting the bun tops on. Brush the bun tops with melted butter (I did this part!!!!) and some chopped onions (we omitted this part—mostly because there were MORE than enough onions for my taste at this point and oh, yeah, I never told hubby about that part of the recipe 😬). 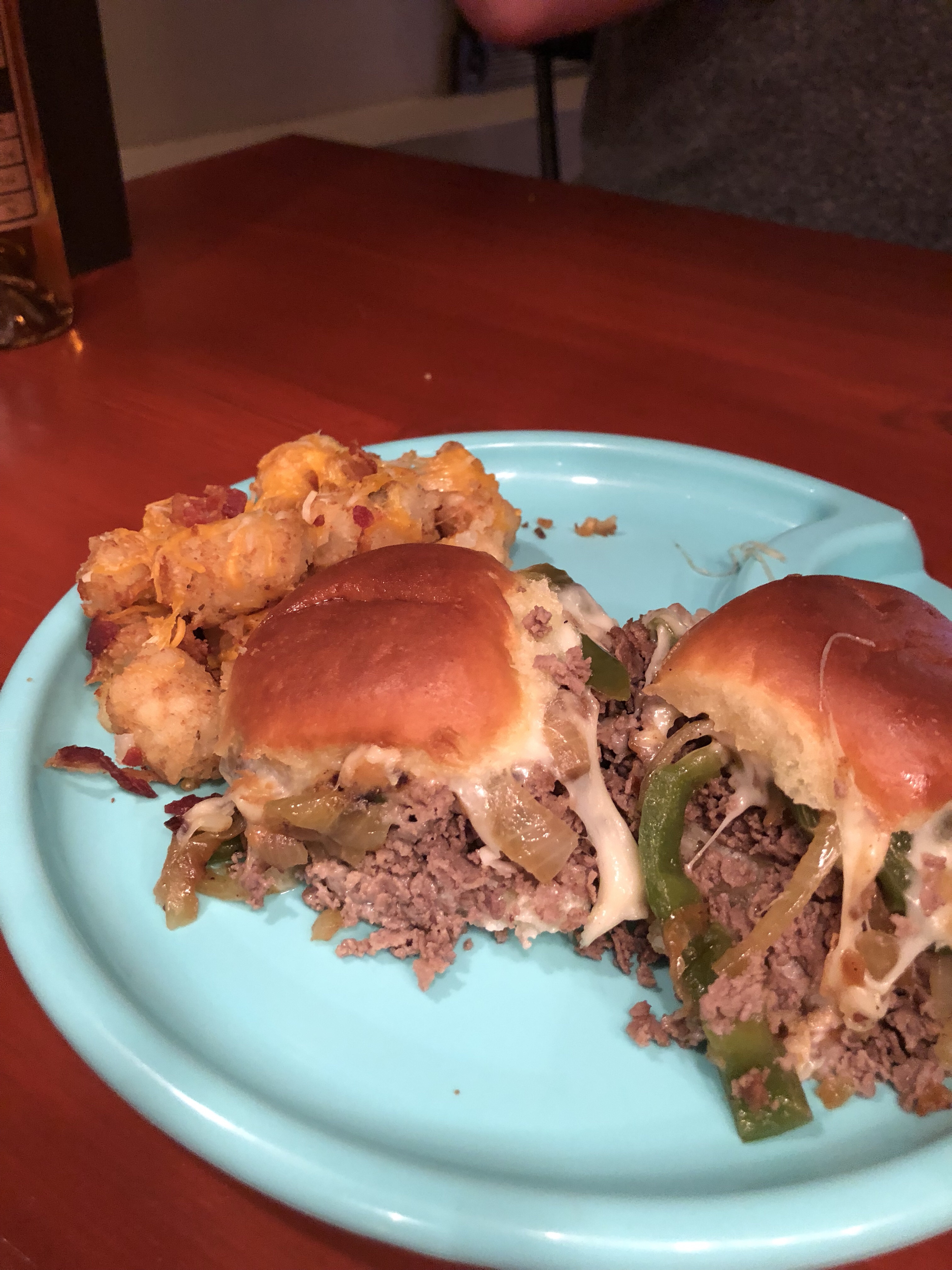 Looks great, doesn’t it? I can’t wait to eat these tomorrow! Damn, now that I think about it, I made these sliders during the Vikings/Eagles game and the Eagles won…I may have to defrost that Clam Chowder after all. 🙄