Skip to content
The Bad Mommy Cooks
By Badmommy May 11, 2018April 17, 2019
FYI...my posts may contain affiliate links. This means that if you click on those links and make a purchase, I will receive a small commission at no cost to you. And those commissions are what makes it possible for me to blog. Thank you!

So this week was a momentous week for our family. It’s only Thursday and we managed to cook not one, not two, but three kick-ass meals this week. (We got take-out one day.) What?!?! You mean you didn’t go out to eat this week?

Well, due to hubby’s annual bout with poison ivy, we have opted to stay in. Poor guy…every year he gets all motivated to clean up the yard and do some gardening and within days his face and arms are covered in poison ivy. He didn’t want to be seen in public in case he sent children screaming in fear. (I can’t really blame him—he does resemble Quasimodo a bit…) 😵 Hence, our home-cooked meals this week.

But, we had nothing prepared for dinner tonight. Hubby was supposed to be at work, but once again, due to the swollen eyelids from the poison ivy, he was home. I had been planning to grab some more take-out. Then I realized that I could buy some scallops and we could quickly and easily whip up some easy risotto and pan-seared scallops.

What? You must be joking!

Yes, you read that correctly. And no, I’m not joking. Risotto and pan-seared scallops is a quick and EASY weeknight recipe that I discovered about a year ago and have made several times since. It’s well received by the children and adults in the household alike.

And the best part is…I haven’t screwed it up yet. Even though it’s risotto, and risotto is supposed to be complicated, this one isn’t. If you don’t think you can make it, I am here to assure you that YOU CAN DO IT!

The best way to make the scallops? In a cast iron skillet. We agonized for YEARS over buying one. I really have no idea why. They are SO affordable and make everything taste better. If you’ve been thinking of getting one, try this one. We (especially HUBBY) love it.

I Admit, I Was Nervous the First Time I Made Risotto and Pan-Seared Scallops

Okay, so the first time I made it, I was sweating buckets. Hubby was supposed to make dinner that night and he got called to work right before he started dinner. I was left holding the pan…literally. He had been planning to make the scallops and some complicated risotto, but I have watched him make risotto before and it scared the bejezus out of me. Plus pan-seared scallops? Soooooo many ways I could screw that up. There was no way I was attempting to cook two things that I had never cooked before. So instead of marching blindly toward certain failure, I searched trusty old Pinterest for the easiest risotto recipe I could find. And boy, I was NOT disappointed.

So how do you make this magic risotto?

Start off by melting 4 TBSP of butter in a pot over medium heat: 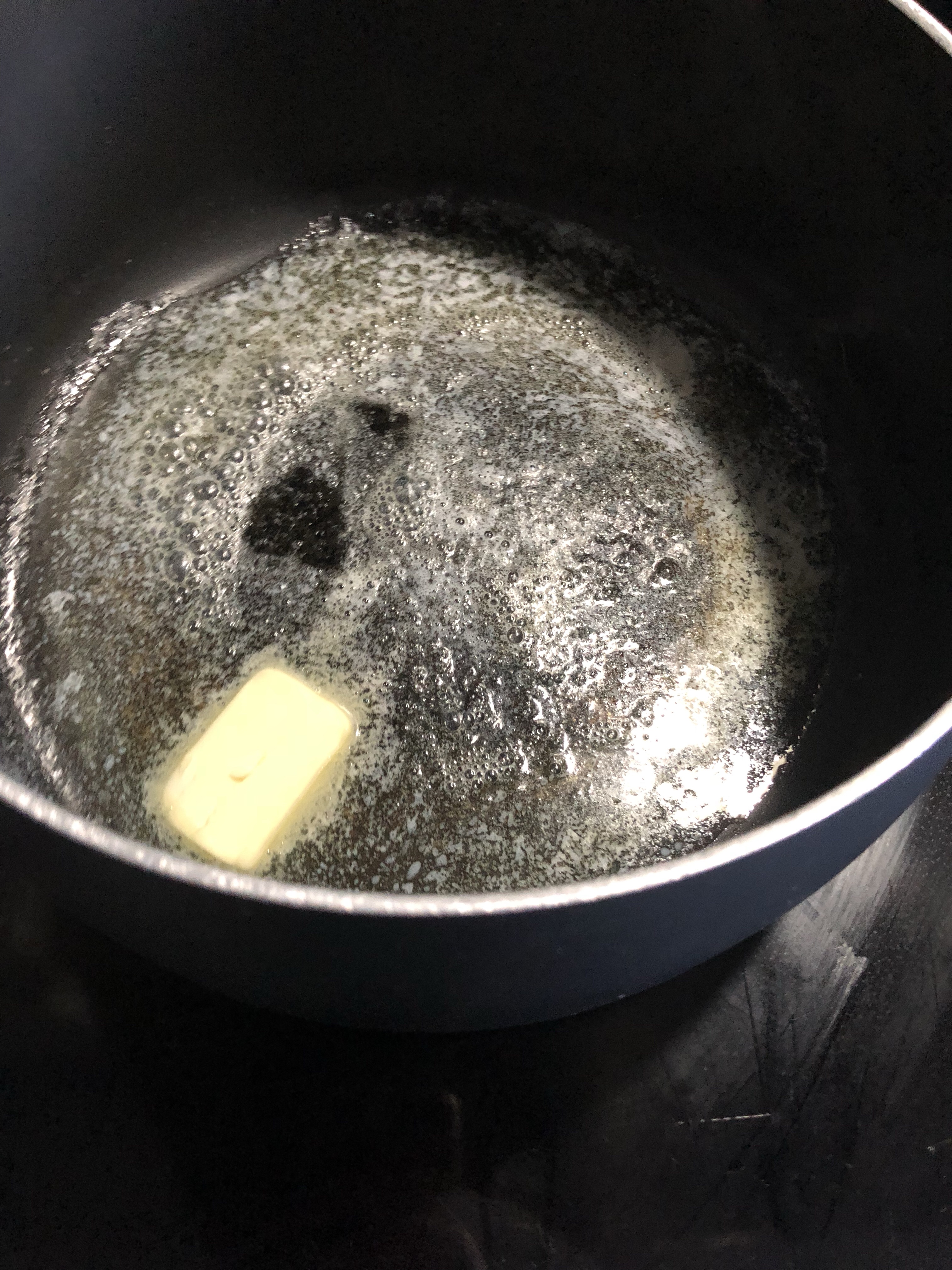 Add the cup of risotto and toast it up for about 3-4 minutes: 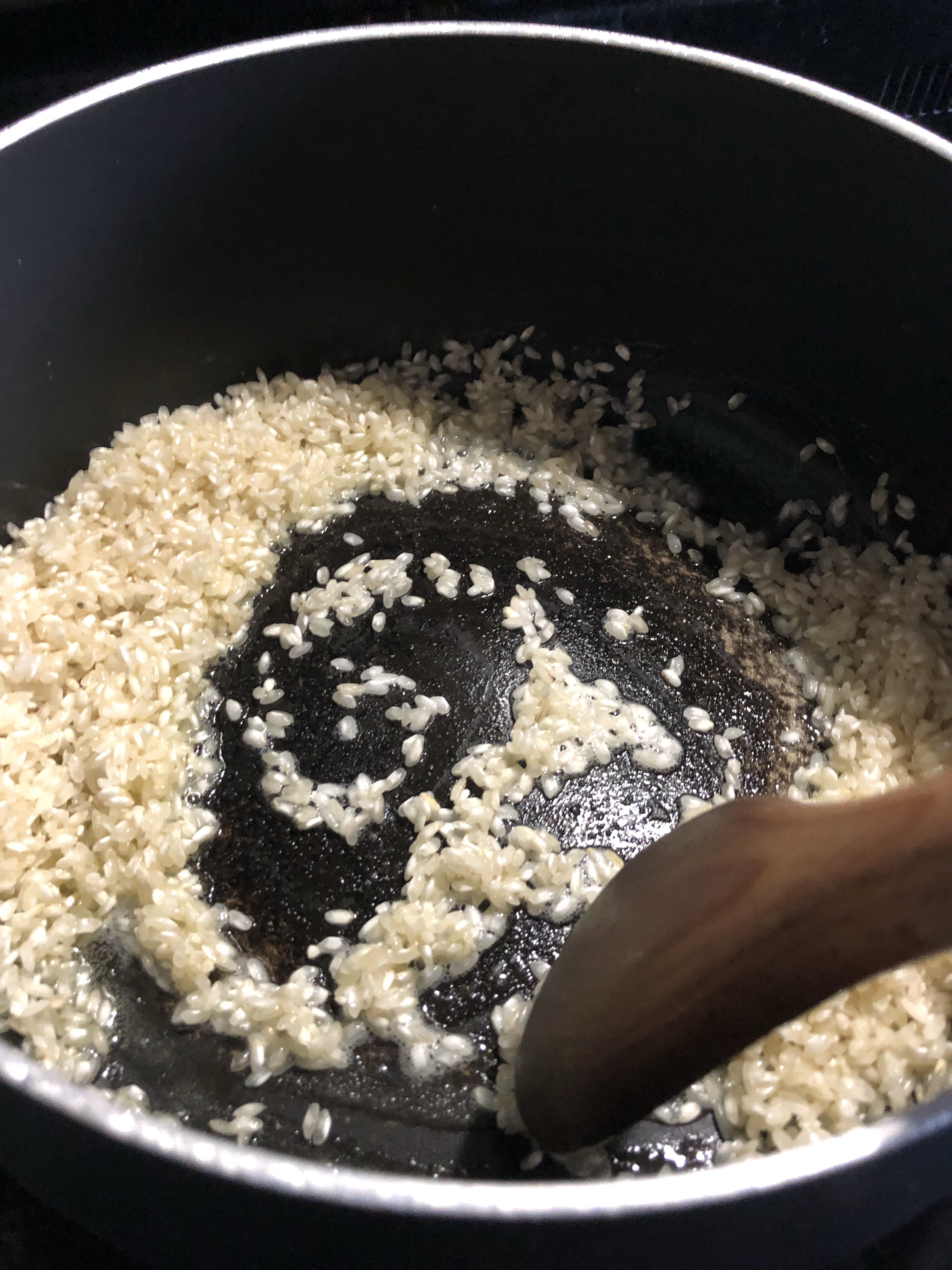 Add one cup of chicken stock and stir. Let that simmer for about 10 minutes, or until the liquid is almost completely absorbed: 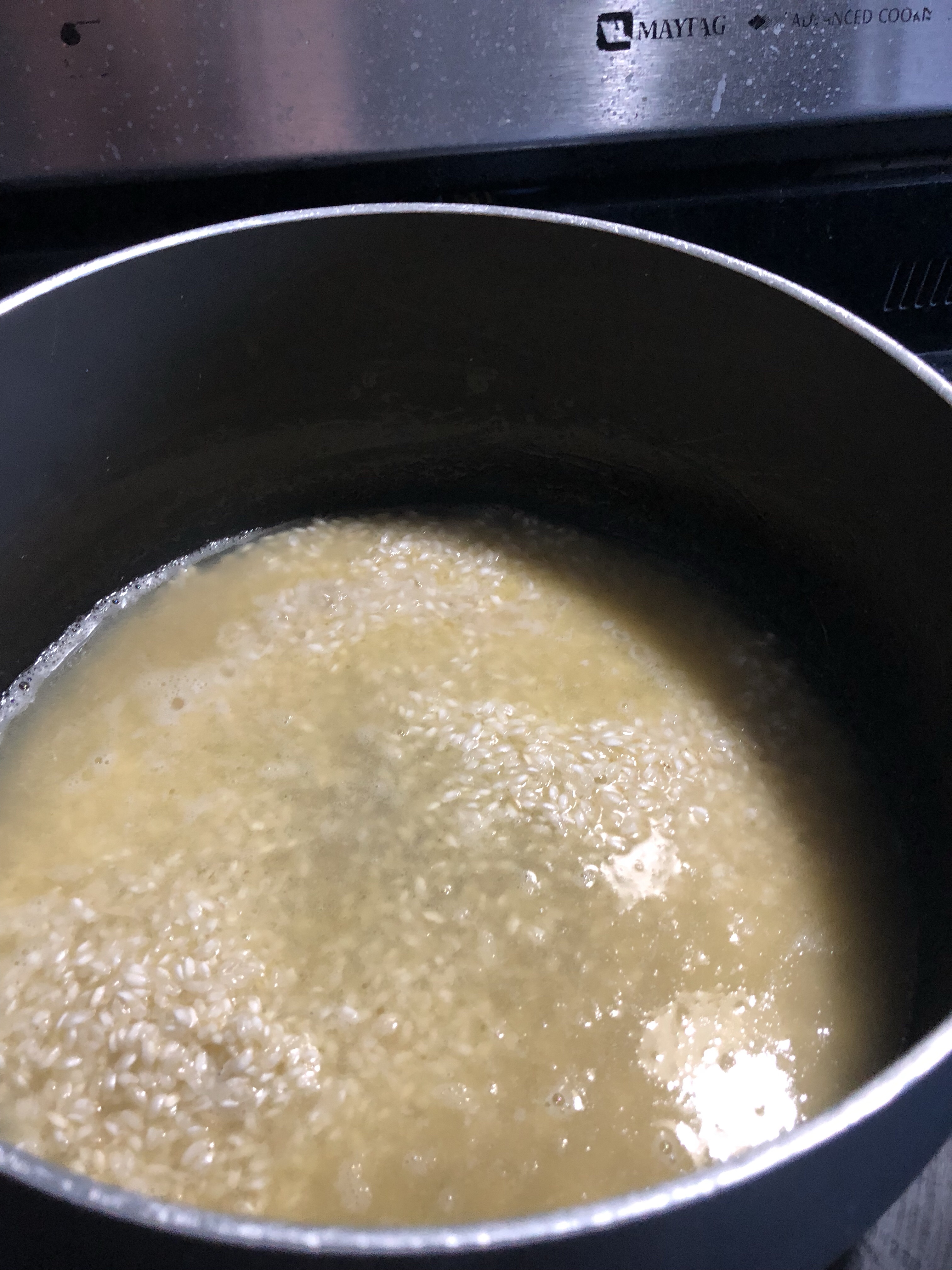 Add another cup of stock, repeating the process: 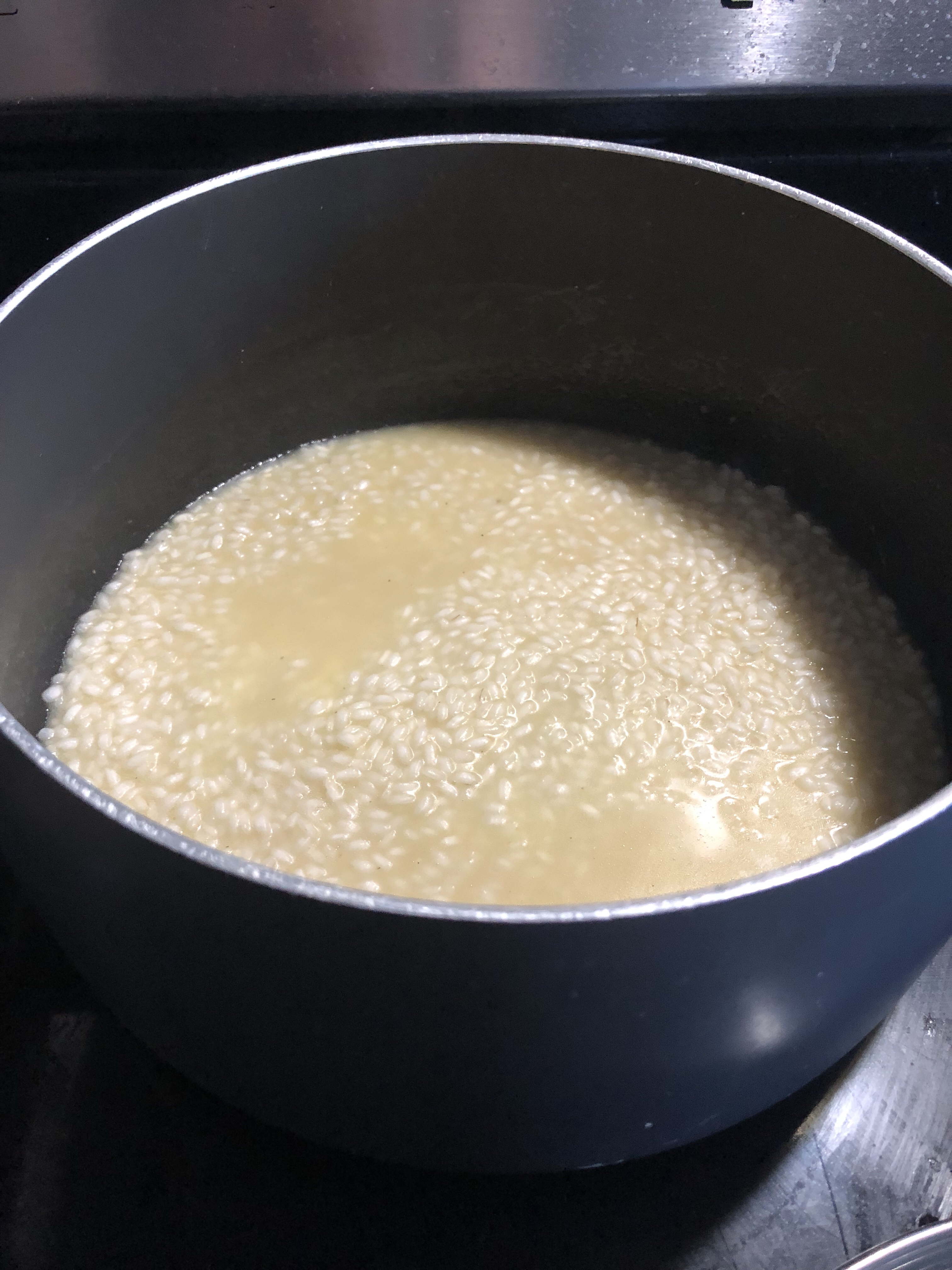 Finally add a third cup of stock and allow to simmer until almost all liquid is gone. The rice should be the right consistency at this point—not crunchy, but not too mushy either.

Remove pot from heat. Stir in 2 cups of cooked chopped broccoli. (You could probably use asparagus or green bean if broccoli isn’t your thing.) Then stir in approximately 2 cups of shredded cheese until it is as cheesy as you like. I used cheddar, but next time I plan to use asiago: 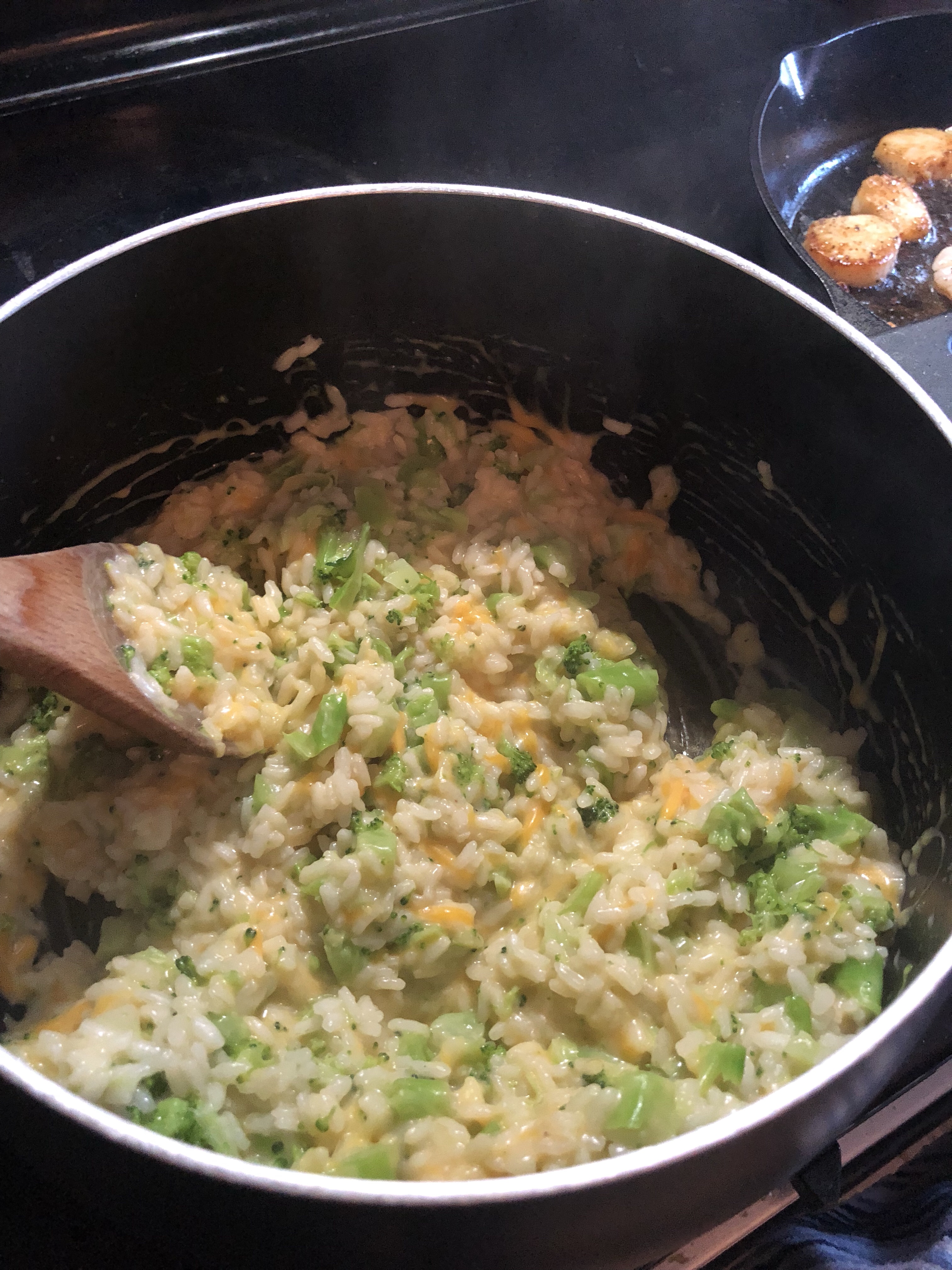 I added some black pepper and smoked paprika for some extra flavor, but this is totally optional.

While I was doing this, Hubby was making the scallops. You CAN do it all at once with only one person—I’ve done it. But he gets so excited when he has the opportunity to use his new cast-iron skillet , so I let him make the scallops. Big of me, right?

He started off by sauteing garlic in the skillet. Why? I don’t know. Maybe it was fun for him. 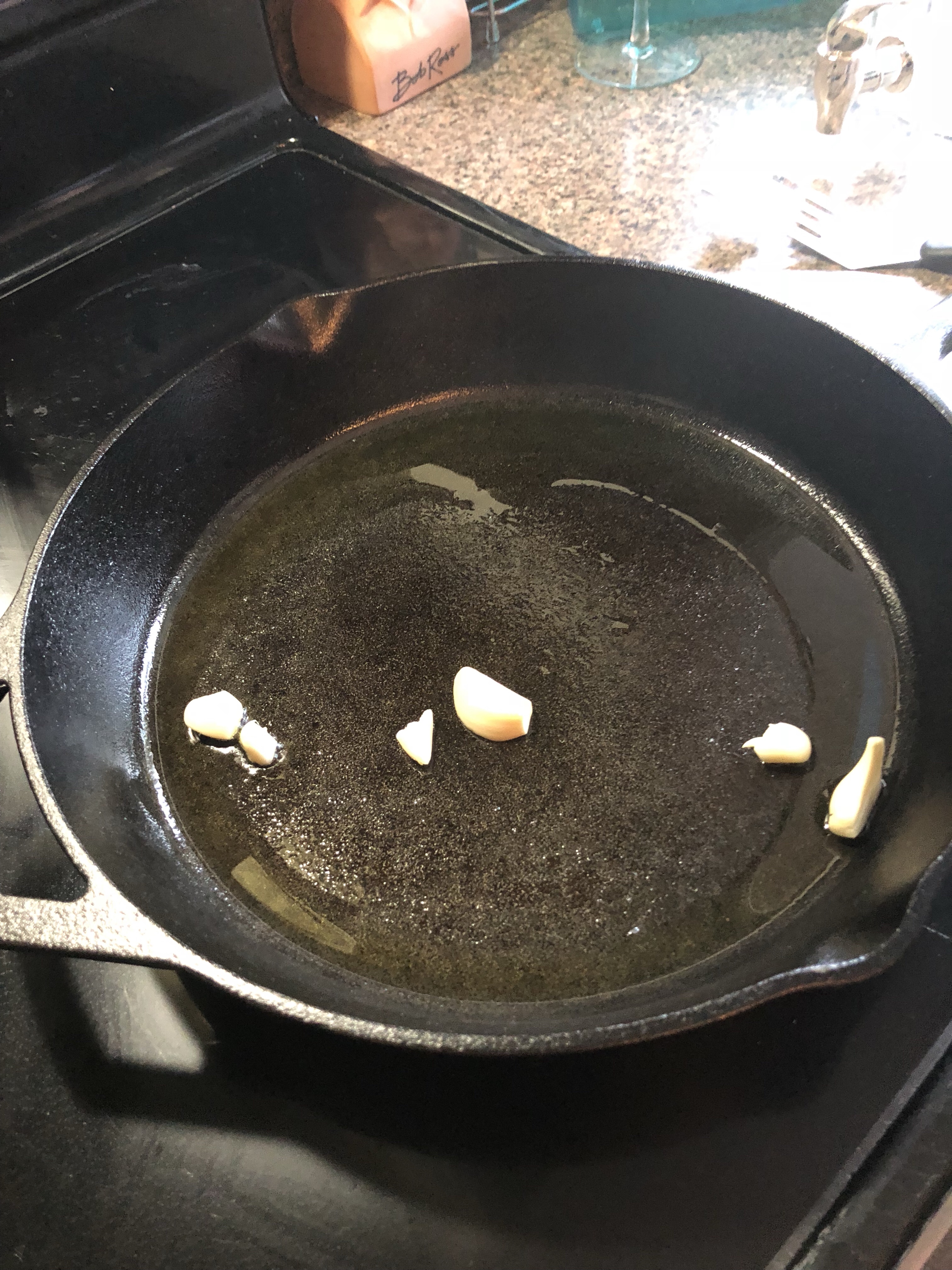 He then pan-seared the scallops to a nice golden brown color:

And that was it. His big contribution. 🙄 I guess I need to go easy on him since he’s “injured” and all that.

Finally, the two components of the meal came together for this Instagram worthy photo: 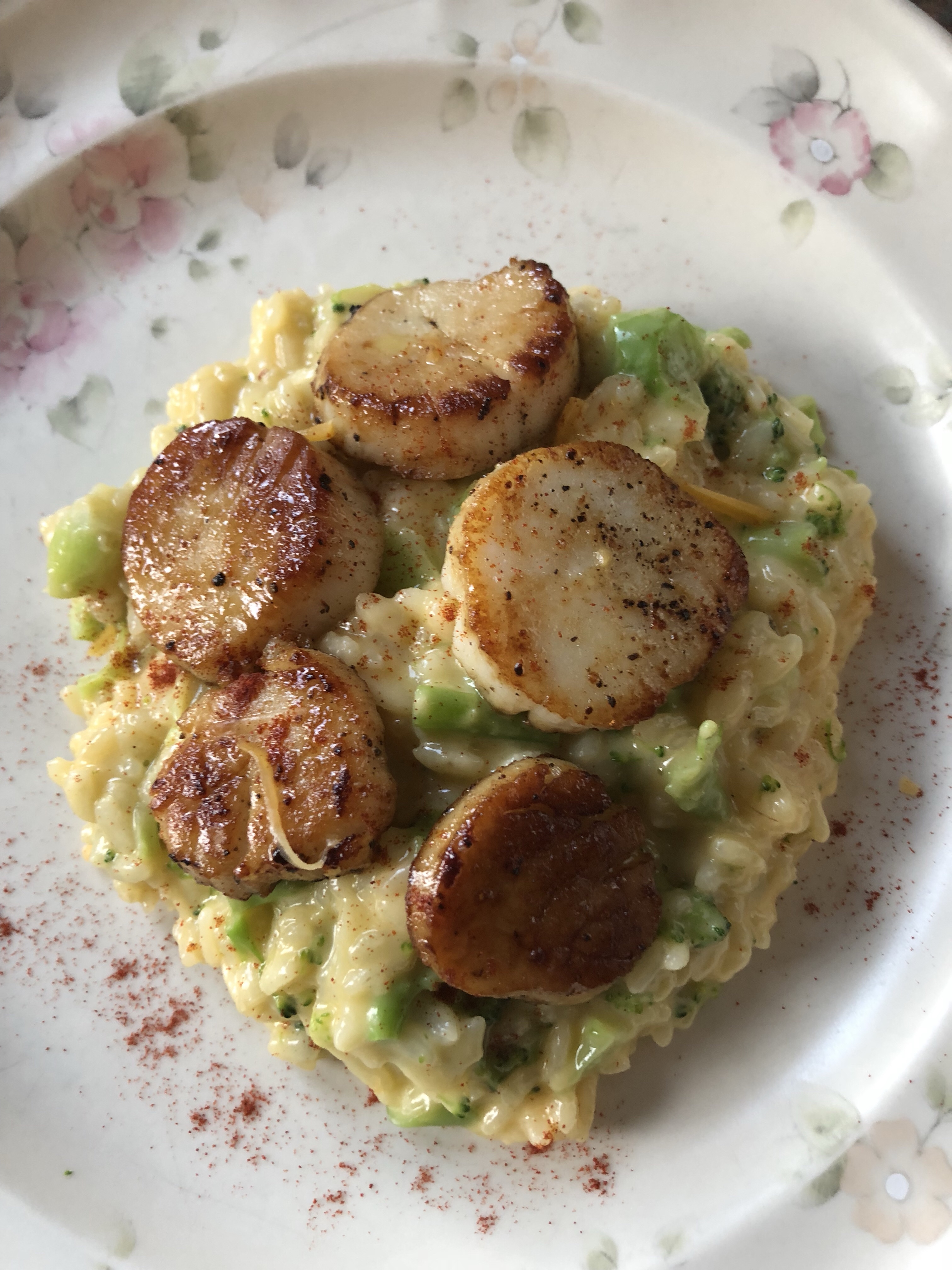 Sooooooooooo good. There was not a bite leftover…much to the dog’s dismay. It didn’t stop him from trying, though: 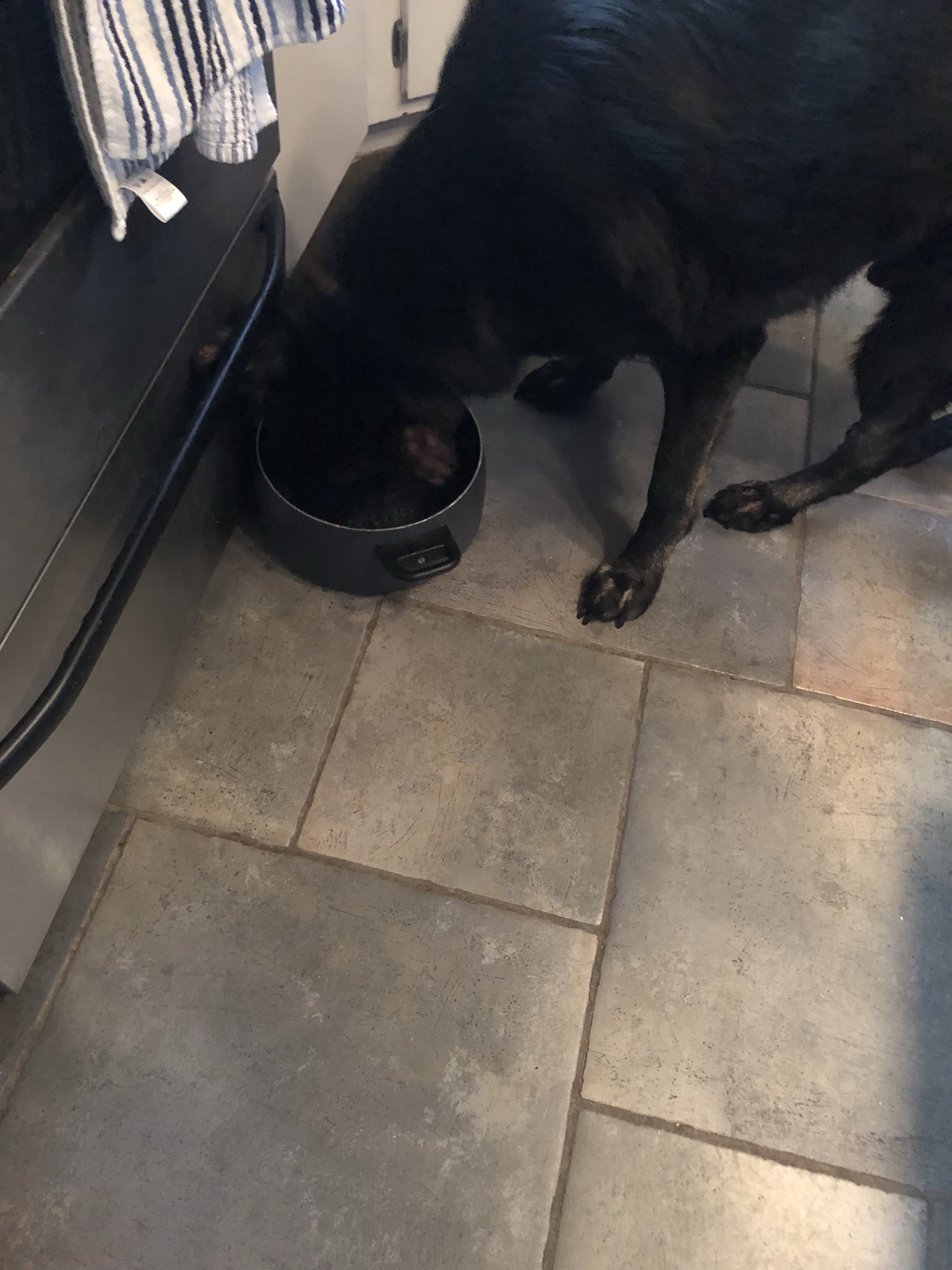